Share
Located in the center of the Valdelsa, the town is made up of two distinct nuclei: the medieval part called Certaldo Alto and the lower part. The main artistic and architectural feature of the village, which made it known and famous in Europe, is the perfect preservation of the medieval urban fabric with its narrow streets and small squares scattered here and there. 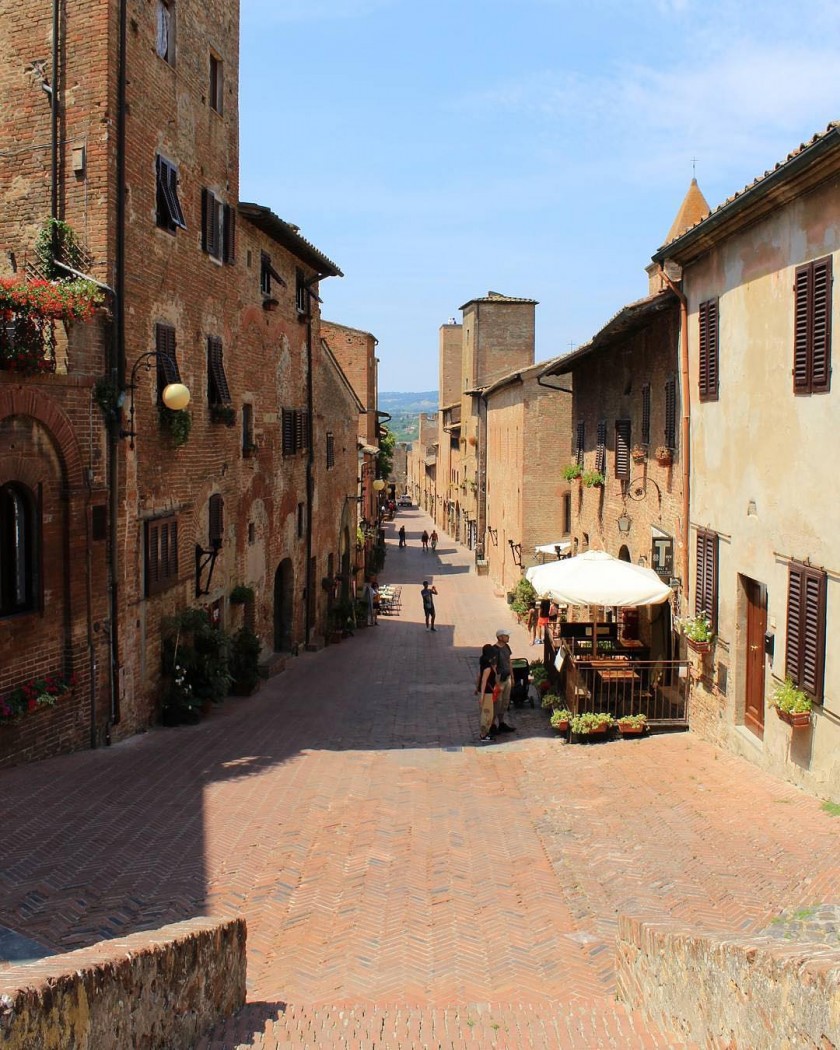 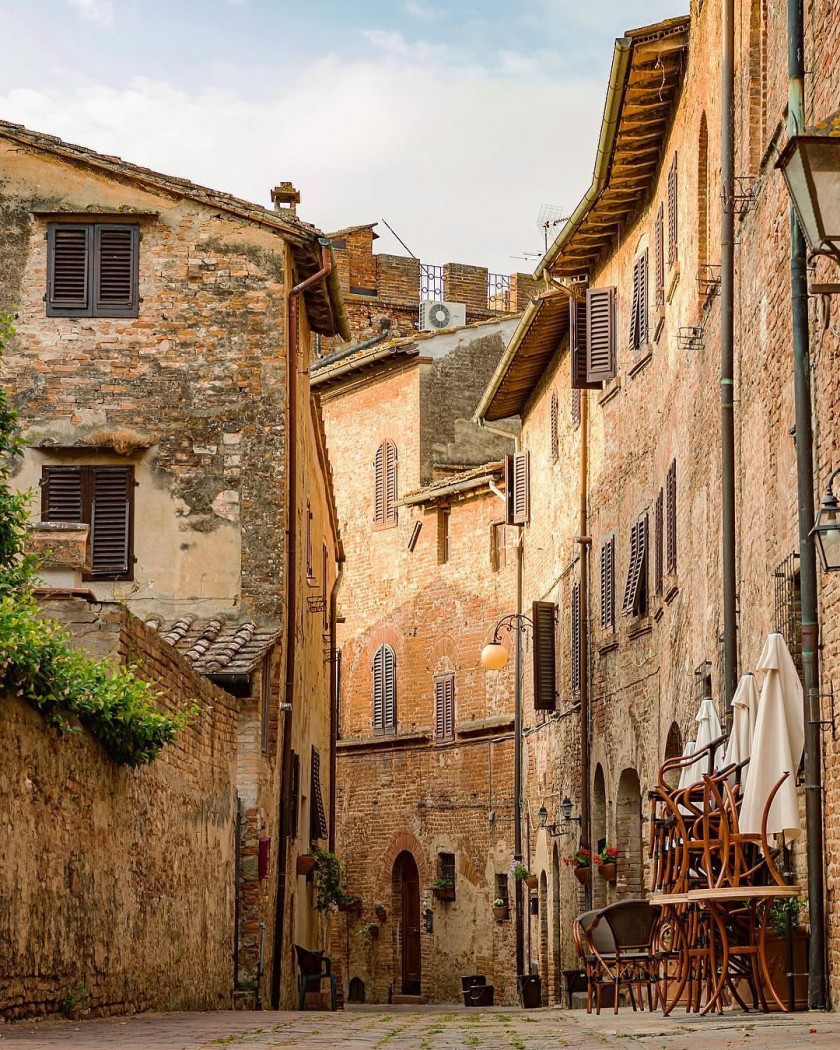 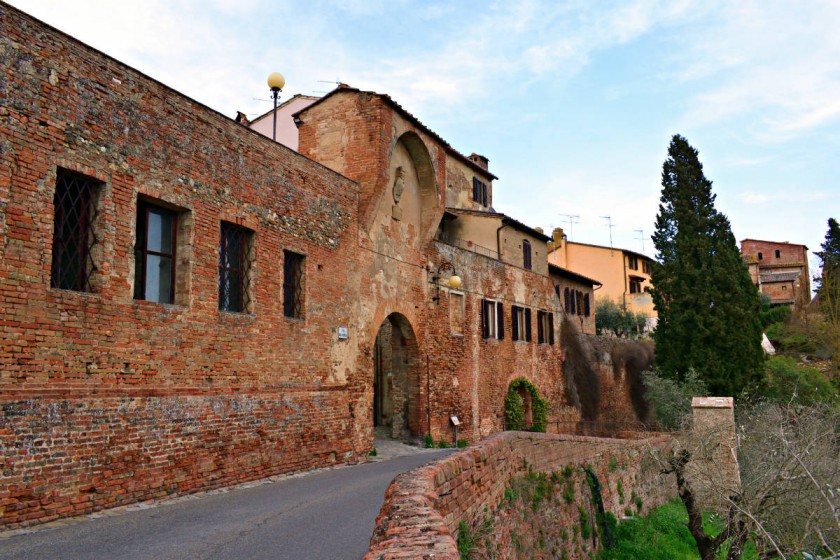 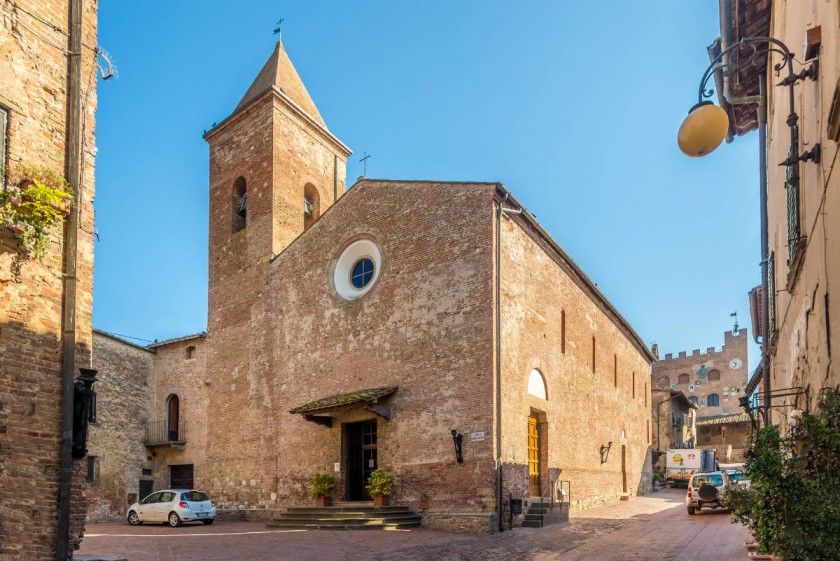 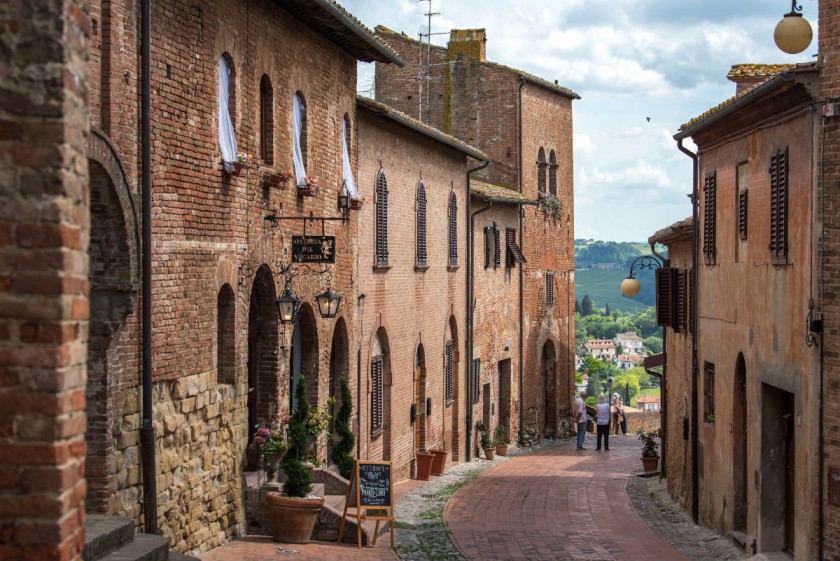 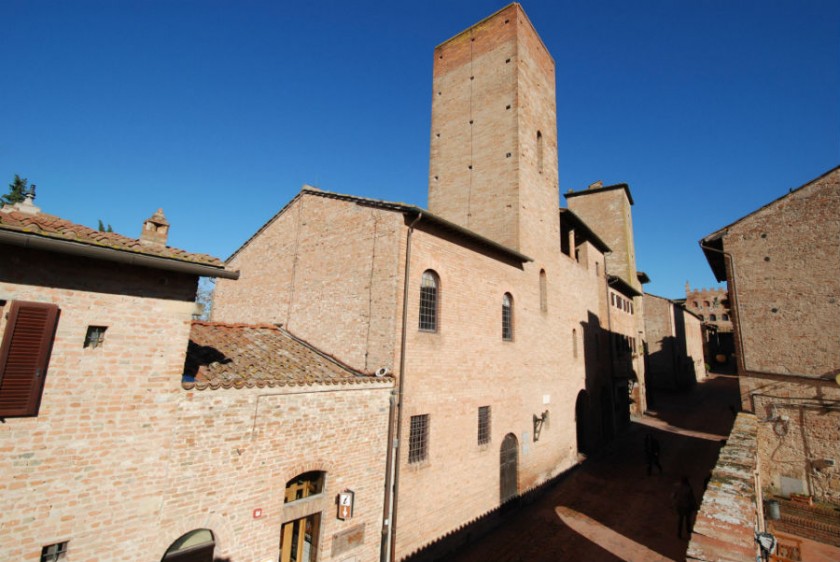 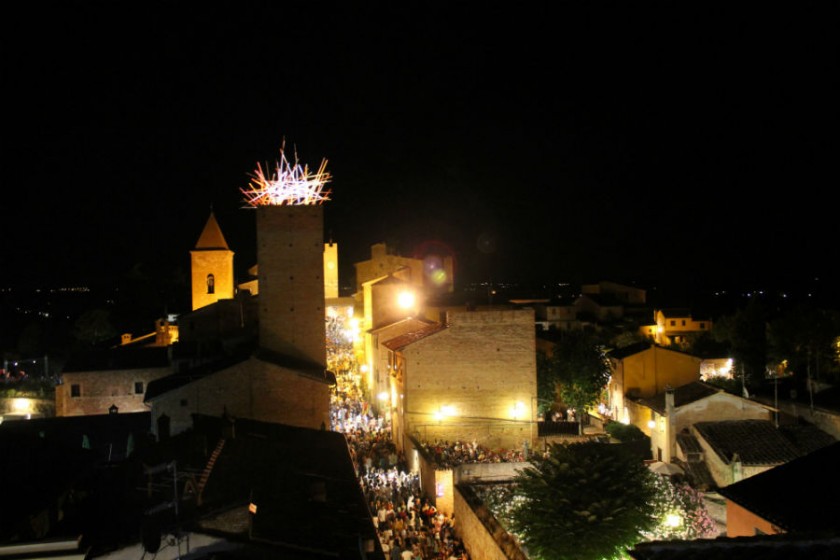 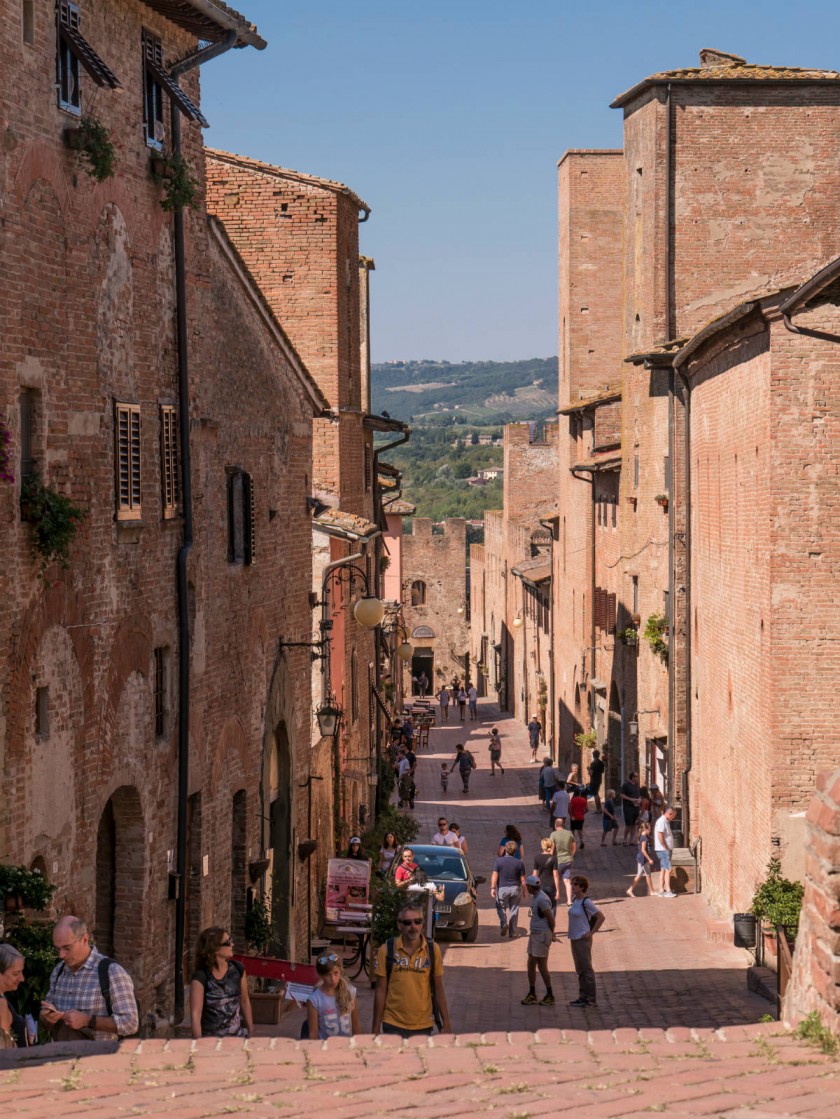 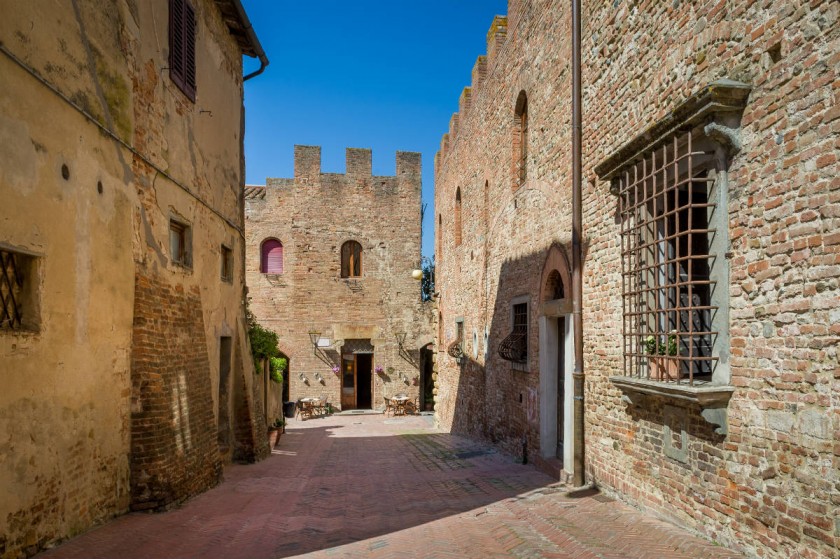 A look at Certaldo

The village of Certaldo is located in the center of Valdelsa, Tuscany. It is formed by two cores distinct: the medieval part with the Palazzo Pretorio said Certaldo Alto, that rises on a hill and the low part. Certaldo Alto can be reached both by car (limited traffic zone for the use of residents only) that with a funicular up rail provided with a rack, with departure from Piazza Boccaccio. In plain instead extends the part "modern" of Certaldo, subsequent to the medieval settlements, which has known its major development from the end of the Eighteenth Century.

The etruscan origins are testified also by the toponymy of some localities and watercourses, as for example the Agliena River and the river Elsa which converge near Certaldo. On the Poggio del Boccaccio, adjacent the village in north-west direction, were found a chamber tomb Etruscan-Hellenistic of ellipsoidal plant of the end of the IV a.C., and a warehouse in the well of foodstuffs with some instruments fittili traceable to the Hellenistic period. In a south-westerly direction with respect to the village instead, near another hill artificial considered called Il Poggio delle Fate were discovered an underground barn to cells and the remains of an Etruscan Tumulus and numerous tiles bollate. All these findings of etruscan and roman origin are musealizzati today on the ground floor of the Palazzo Pretorio, situated in the medieval part of the country. Very probably the agricultural village high-medieval took shape from the previous settlement dating back to the Etruscan age-Hellenistic and at the end of the IX century d.C., with the strategic importance of the area due to the passage of the via Francigena, there was built the first feudal fortress. The fortified tower was located at the apex of a hill from which you could check the via Francigena, the main street of the medieval communication between Northern Europe and Rome. This strategic position certainly favored the demographic development and its evolution before in the castle and subsequently in a fortified village, leading to the construction of civil buildings around the primordial donjon. Born between the XI and XIII century the church of Saints Thomas and Prospero (the oldest church of the medieval village, today deconsecrated), the convent and the cloister, the Torre dei Lucardesi and the first civil houses and houses and towers along via Rivellino, the most ancient of the village that connects the fortification to via Francigena, and near the tower on top of the hill. A first walls contained all this primitive urban nucleus that assumed the conformity of a fortified castle real.

The main architectural and artistic characteristic of the village of Certaldo, which has made it known and famous in Europe, is the perfect preservation of the medieval town planning, with its narrow streets and small squares scattered here and there. Further evidence of this characteristic is the lack of a large square in the historic center, while in its place we find there a long and wide track (Via Boccaccio) who carried out the functions representing the public place of excellence and conception typically high-medieval. However who rises in Certaldo Alto will find two squares: the first is piazza della SS. Annunziata, created at the beginning of the XIX century paving an area that was destined to the vegetable gardens and the crops in general; the second, Piazza SS. Jacopo e Filippo, in front of the homonymous church, instead it was originally used as a cemetery of the convent until 1633.

Certainly deserve a visit to the church of Santi Jacopo e Filippo, the former church of Santi Tommaso and prosperous, Palazzo Pretorio, Boccaccio's house and the ruins of the castle of Pogni. There are numerous events that animate the village during the year, as Mercantia, Boccaccesca and Tuscany International Jazz Summer School and Arts Festival.

"Certaldo is a castle place in our countryside, which, although small in size, already of noble men and wealthy was inhabited", so he wrote in his Decameron the illustrious Giovanni Boccaccio his birthplace, Certaldo and of which today consecrates the memory. Not only through the house that hosted the poet in the last years of his life, but because, strolling in the streets of the town, every corner, each step or loggia, every brick house seem to accommodate some character that came precisely from the Decameron, ready to give us a gossip of first hand. And it is precisely the 'Castel' mentioned by  Boccaccio the most interesting part of the village to visit, especially for tourists who love art and events of the past. Passing through the narrow streets and small squares scattered here and there in Certaldo Alta, in the perfect preservation of the medieval urban fabric, we arrive at the Palazzo Pretorio, right on top of the hill. The Church of the saints Jacopo and Filippo houses the tomb of Boccaccio, while in the Church of Saints Thomas and Prospero was recomposed the Tabernacolo dei Giustiziati, realized by great Benozzo Gozzoli. It is however worthy of note also the visit to the low part of Certaldo, that took shape thanks to the strategic position of the village on the via Francigena. The impressive flow of wayfarers, aroused by the road to Rome, was bearers of novelties, often of cultural influences and materials: Certaldo as alphabet of styles and contamination.

The Palazzo Pretorio
Palazzo Pretorio or dei Vicari is located in Certaldo, in Tuscany.
Piazzetta del Vicariato, Certaldo
House Museum of Boccaccio
according to the tradition in this House Boccaccio lived the last years of his life here in Certa...
Via Giovanni Boccaccio, 18, Certaldo
Santa Chiara Museum Complex
The complex of the former Santa Chiara Conservatory of San Gimignano houses an interesting archae...

Azienda Agricola Teruzzi & Puthod
The Teruzzi&Puthod Winery is located in the hills of San Gimignano, in Tuscany.

loc. Santa Margherita, 34 , San Gimignano (Siena)
9.11 Kilometers from Certaldo
Coltelleria Saladini
The ancient medieval town of Scarperia was founded by the Republic of Florence on 8 September 130...

Travel proposals in Certaldo and in its territory

Festival of Steak and Porcini Mushroom 2022

Travelling with Dante: the most fascinating villages in the life and work of the Supreme Poet
The Supreme Poet influenced Italian culture, creating a common language and drawing inspiration from his wanderings around Italy to build a collective memory in his most famous work, the Divine Comedy. Let's discover below which villages are linked to Dante's personal or artistic life. Brisighella and Certaldo: life and works of Dante in two splendid villages We begin our journey in the footsteps of Dante's travels among the most beautiful vi...
Continue
Montelupo Fiorentino: gems of Tuscany
Magnificent and munificent, Tuscany, a region studded with precious jewels: the villages of memory, a unicum of history, traditions, legends, customs and folklore. Starting from its capital, Florence, in whose territory, among the numerous, Vinci, Barberino Val d’Elsa, Certaldo, Montefioralle and Scarperia stand out. And then Montelupo Fiorentino, whose manufacturing tradition is also found in the gastronomy that goes from the past to to...
Continue
Recipe: the Certaldo Vernina onion soup
In Valdelsa the famous red onion of Certaldo is produced, which is also the symbol depicted in the red-and-white flag of the charming village in the province of Florence: it was the counts Alberti, feudal owners of Certaldo during the 12th century, who inserted it iconographically in the official banner. Red onion is therefore not only a simple ingredient to use in the kitchen, but a real identifying element of the city, so that the inhabitants of Certaldo are called "cipolloni". If you want to enhance the red onion of Certaldo, preferabl...
Continue
The mysterious galleries and the treasures of the village of Certaldo
A legend handed down by the elderly of the Tuscan village of Certaldo tells that in the subsoil of Certaldo Alto, one of the two nuclei that make up the village, there are a series of tunnels and galleries that would cover the entire perimeter of the village and arrive up to a mysterious hill nearby called the "Poggio del Boccaccio". These tunnels, which seem to have been dug by hand, would date back to the year 1000 but we do not know for what purpose or by whom. Within these galleries, legend says, there would be many objects bo...
Continue
Even the villages say 'No more violence against women'
Friday, November 25 will be celebrated the International Day Against Violence Against Women, an event established by the General Assembly of the United Nations to invite governments, international organizations and NGOs to organize activities aimed at raising awareness against violence against women. The anniversary, which has been celebrated in Italy since 2005, but has had an important media leap only in 2007, when 100,000 women demonstrated in Rome “Against Violence Against Women” witho...
Continue
Imagine a Chocolate Town ... Saturday 18th and Sunday, November 19th in Certaldo
A delicious weekend in the Florentine village of Certaldo is coming, thanks to the initiative "The City of Chocolate, Chocolate and gluttony", which will take place on Saturday 18th and Sunday, November 19th in the town center. Many manufacturers and artisans will exhibit their art and offer to the public their chocolate-based delicacies. Also showcasing arts, crafts and educational games linked to the world of chocolate so that Piazza Boccaccio and Via 2 Giugno will be transformed into a real worksho...
Continue
Unique Tuscan villages to Love - Download a free travel guide to the 51 certified Tuscan villages
It has recently been made available a free travel guide by Toscana Promozione Turistica, in Italian and English, about 51 Tuscan villages certified in the Borghi più Belli D'Italia, Paesi Bandiera Arancione, Mibact's Gioielli d'Italia and UNESCO World Heritage Sites. The volume, edited by Claudio Bacillieri, director in chief for Borghi Magazine, accompany th...
Continue