Share
Perched on a spur about 500 meters high, Oriolo was born as a fortress to defend populations fleeing the coasts due to the constant incursions of the Saracens. Today the village retains its structure as a medieval village with noble palaces and a main road that leads directly to the Aragonese castle. 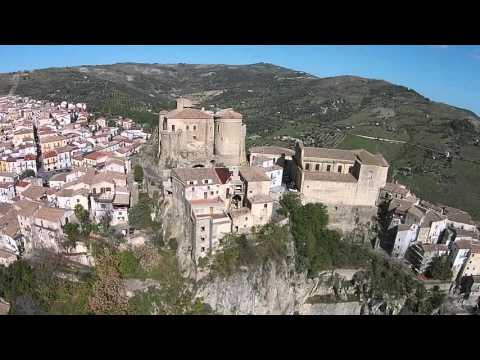 The sheltering village of Oriolo was born as a fortress to defend the populations fleeing from the coasts due to the continuous Saracen raids. Perched on a rocky spur at about 500 meters of height, preserves a splendid medieval village intact, with beautiful facades of palaces, on the main road that leads to the aragonese castle.

It was a feud first of Sanseverino from Salerno and then to move in the XVI century, the marquises Pinion Del Carretto. And following the noble Soria family until 1978. Until the second world war the country had a population of about 5000 inhabitants, and was the major center of Alto Jonio and point of reference for the countries of the Arberia (Albanesi) and Pollino, saw almost halve its population, which is arrived at about 2600 inhabitants.

Around the year One Thousand Oriolo was already a "civitas". In 1129 Oriolo came encircled of siege and taken from King Ruggero, while in 1265 Oriolo was possessed by Charles II of Anjou. In 1403 was already possessed by the Sanseverino family, princes of Salerno and large of Spain, which however, headed a conspiracy and the feud was expropriated by the Royal Court. In 1571 a large group of Oriolesi participated in the battle of Lepanto. To memory was introduced in Oriolo devotion and the feast of the Virgin of the Rosary, is celebrated on the first sunday of october. In 1647, during the note revolution of Masaniello, rebels oriolesi occupied the castle, damaging furnishings and looting of everything, after having forced the pinion to surrender.

On 8 January 1693 a telluric event took place the whole of Calabria and also Oriolo, but the urban layout of the village ruled to the shocks. Another important factor is the letter of Giuseppe Garibaldi addressed to Joseph Pinion Del Carretto on 10 September 1860. The Marquis of Oriolo found himself having to face, together with the representatives of the Bourbon government, a very delicate situation.

Oriolo saw halve its population in little more than half a century but nevertheless maintains the tourist vocation already developed from the second half of the twentieth century, thanks also to the Outdoor Theater "la Portella".

Certainly deserve a visit to the Church of San Giorgio and the Castle.

Among the numerous typical dishes and products that characterize Oriolo from the point of view of the enogastronomic excellencies, we point out the three that boast the Municipal Designation:

the Municipality is part of:
I Borghi più belli d'Italia
Paesi Bandiera Arancione

Via Cesare Beccaria, 7, Rotondella (Matera)
14.93 Kilometers from Oriolo
Prison tower
The Prison tower of Rotondella, in Basilicata, is what remains of the sighting tower built in 1518.

Feast of St Francis of Paola

Do you know Oriolo, the 'Matera calabrese'?
In the year in which Matera is playing the prestigious role of European Capital of Culture, there is another village in Southern Italy destined to attract more and more the attention of national and international tourism. We are talking about Oriolo, a Calabrian town of about 2100 inhabitants perched on a rocky spur between the hills of Cosenza. From a geological and architectural point of view, in fact, it is very similar to the Città ...
Continue
Calabria of the villages, cribs and fairy tale places
The Calabrian villages as unique places, "intertwined" to the "people" who live there and animate them, but also as "places" of experimentation for new forms of hospitality, entertainment and sociality, destined to a tourist demand now very far from the patterns of mass tourism. The Villages of Calabria, also and however, as an extraordinary opportunity for growth for the territory and for the wellbeing of the local populati...
Continue