Share
In the heart of the imposing massifs of the Dolomites, among the hidden natural and cultural treasures of the Alta Pusteria, stands San Candido. A renowned winter and summer tourist resort, included in the fascinating mountain landscape of the Three Peaks Natural Park. The hiking trails that wind around the village allow you to explore the area far and wide.

A look at San Candido 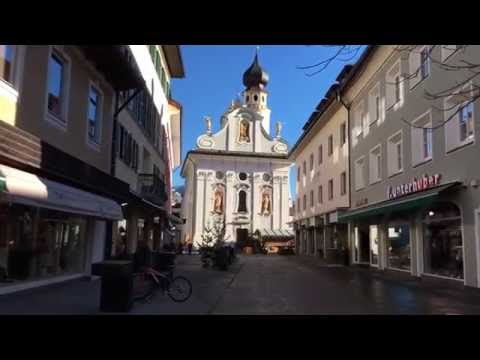 San Candido is an Italian municipality of the Autonomous Province of Bolzano, in Trentino-Alto Adige, located in Alta Pusteria. Today it is a renowned winter and summer tourist resort of the Dolomites, included in the Tre Cime natural park.
The first news of San Candido dates back to 1000 BC: the settlements of the Illyrians and the Celts contributed to its development.

In the 6th century, the clash between Slavs and Bavarians destroyed the village.
Later, in 769, the centre developed around the monastery of Benedictine monks, thanks to the concession of the duke Tassilone III of Bavaria, in order to fight the Slavs.
In 965, San Candido gained independence from the empire, thanks to the Roman emperor Otto I of Saxony.

In the late Middle Ages, the dominion extended towards the villages of Monguelfo, Abfaltersbach and Cadore; in the 13th century, some families of farmers colonized some areas that are now part of the Municipality of Tolmin, in Slovenia.

In the following years, San Candido kept its popularity as a religious center, attracting thousands of pilgrims. That is why the historical center is characterized by many places of worship, as well as by eighteenth and fourteenth century mansions.

With the outbreak of the First World War, San Candido became a hospital, due to its strategical position. In the 1918 division of the Tyrol between Austria and Italy, the municipality of San Candido was assigned to Italy for military reasons, along with two large barracks: Cantore and Druso.

Over the centuries, the economy of San Candido has always been based on agriculture and breeding, with the traditional products that have always characterized these activities.
Today, among the most important activities, there is the production of speck and the establishment of a mineral water bottling company that keeps alive the tradition of the sources of the San Candido wood, the water "Kaiserwasser", dear to Austrian emperors.
The food and wine of San Candido is based on products of the highest quality, from malga cheeses to cold cuts, from apples to forest fruits, from mushrooms to many types of bread and to excellent South Tyrolean wines.In the restaurants the quality of the eighteenth century still stands out, where traditional dishes such as venison goulash, speck dumplings, Schlutzkrapfen, similar to ravioli stuffed with spinach and ricotta, roasted chickens, luganighe and stuffed pancakes, are found. characteristic tirtlan.
Among the typical desserts, we find apple strudel, Strauben and krapfen; during the carnival period the traditional San Candido fritters are prepared, a sort of loaf of stale bread soaked in milk, mixed with flour and blueberries and fried in oil.

Strada Tor, 65, San Martino in Badia (Bolzano)
30.00 Kilometers from San Candido
Paul Flora Museum
Inside the church tower of Glurns was set up this exhibition dedicated to the illustrator Paul Fl...

Masseria 22 - 39040 Ridanna, Racines (Bolzano)
78.79 Kilometers from San Candido
Zum Turm Hotel
Historic hotel in the enchanting village of Castelrotto is embraced by the Dolomites and is the p...

Kofelgasse 8 I-39040, Castelrotto (Bolzano)
57.90 Kilometers from San Candido
Hotel Restaurant Lilie
Among all the hotels in Vipiteno, the Hotel Lilie conveys a truly unique charm.

Via B.-J.-Grasser. 4 - 39020, Glorenza (Bolzano)
131.44 Kilometers from San Candido
Parc Hotel Florian
A relaxing experience at the foot of the Seiser Alm

Via Henrik Ibsen 17, I - 39040 , Castelrotto (Bolzano)
58.26 Kilometers from San Candido
Hotel Walther von der Vogelweide
In our opinion it is the best place to have a stay in Chiusa. It is located in a building in the ...

Via Flora 9, Glorenza (Bolzano)
131.78 Kilometers from San Candido
Johannserhof
Open from October to March, the farmstead run by the Brunner family produces an excellent Müller ...

Via Geizkofler 15 , Vipiteno (Bolzano)
66.92 Kilometers from San Candido
Laimburg Winery
Laimburg Winery, in the province of Bolzano, is part of one of the towns on the South Tyrolean Wi...

Laimburg 6 I-39040, Vadena (Bolzano)
82.46 Kilometers from San Candido
PUNI distilleria
Outside the mighty walls of Glorenza there is the PUNI distillery, the first and only whisky dist...

San Candido is present in issue 2 of our digital magazine e-borghi travel.
Read it now!

San Candido, a destination for all seasons

Christmas traditions in Italian villages
Christmas is the most popular festivity for young and old: the cities are lit up with lights and decorations, while homes are warmed up with Christmas trees and nativity scenes. In the Italian villages, from north to south, often ancient traditions are carried on, which help to rediscover the true essence of Christmas, made of devotion, sharing and peace: living nativity scenes, colossal Christmas trees and Christmas markets are the perfect oc...
Continue
Trentino Alto-Adige: an itinerary between artists, markets and legends
Organizing a holiday in Trentino Alto Adige does not necessarily mean having to choose big cities such as Trento or Bolzano, or the most iconic places (Tre Cime di Lavaredo, Lago di Braies, Selva di Val Gardena, etc.). There are in fact small towns that deserve a visit of at least half a day, to experience the authentic spirit of this region. We start from Canale di Tenno, a charming medieval village not far from Riva del Garda and a few hund...
Continue
San Candido, a destination for all seasons
San Candido is set in the unspoilt park of the three Peaks in the upper Pusteria Valley, it’s an ancient village that can still combine the traditions from South Tyrol with the warm Italian hospitality and the middle European atmosphere along its streets. The Austrian border is very near and its vocation is the well being. The well being is featured by breathless landscapes, you can spend hours in front of the amazing three peaks of Lava...
Continue
From Trentino to Calabria to discover the typical dishes of the mountain villages
The colours of autumn invite you to visit the villages of our peninsula, appreciating their beauty and tasting their flavours. In this article we will guide the reader in an itinerary of taste, which will cross Italy from Trentino to Calabria to discover the typical dishes of the mountain villages. Let's set off!
Continue
Recipe: Apple strudel from Trentino-Alto Adige
South Tyrolean cuisine is the expression of two great culinary arts: the tasty Tyrolean cuisine and the graft of imaginative Italian cuisine. All with a hint of Viennese, Hungarian and even Bohemian flavor. It is therefore the variety that distinguishes the South Tyrolean cuisine and there is no single recipe for its most famous dessert, the Strudel. If the filling mostly presents variation...
Continue
The issue dedicated to the well-being of e-borghi travel is online
"I don’t think a man is free if he’s never in leisure” by Marco Tullio Cicerone (106 a.C. - 43 a.C.) whose quote has been running along the centuries and it has reached the third millennium to be so contemporary to be found on Facebook. So the holistic archetype “salus per aquam” (the health through the water) is not surprising and it’s very modern: the physical and mental well-being comes before the renewal of yourselves. So take it is easy, slow-down, travel in Italy and discover the villag...
Continue