Share
In the Isarco Valley, between Val Gardena and Val di Tires, Castelrotto rises within the Sciliar Natural Park, at the foot of the Alpe di Siusi. In this mountain village, cultural and tourist events take place all year round, in which customs and traditions are still cultivated. Ancient monuments and historical sites are worth a visit and guarantee variety during a holiday in the village. 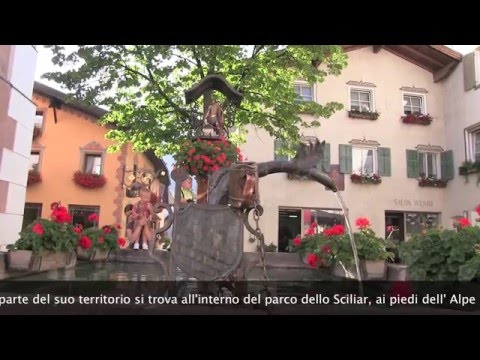 Castelrotto (Kastelruth in German, Ciastel in ladin language) is located inside the Natural Park of the Sciliar, at the foot of the Alpe di Siusi, whose proximity has allowed the development of a flourishing tourism, both in summer as in winter. The toponym is certified for the first time in 982-987 as Castelruptum and in 1173 as Castilrut, with the meaning of "castle ruined".

The name of Castelruptum appears for the first time in a document of 982-987 in which the Bishop Albuin of Bressanone exchanged the income of the local Church with the Bishop Eticho Augusta. Before this date we know that was already present on the spot a settlement, of which however there came the name. The traces of the Castelvecchio can be traced back to the medieval era, there remains today only a massive square tower in addition to some traces of the walls, huts of bricks and therefore the presence of a fortified village. In the XIII century the area passes of property to Count Meinhard II of Tirolo-Gorizia and then to the lords of Castelrotto. In 1348 the castle is owned by the Duke Konrad Teck which is also captain of the department of the Adige. At the beginning of the XV century the castle and the village pass the property to the family Hauenstein and it was at this time that date back to the first farms stable large implanted in the area.

Shortly after the property changes of ownership to Michael Kraus, Hungarian nobleman came here for marriage and already enfeoffed of some land at Lake Balaton. These became famous in particular for the wealth accumulated by his feuds and charitable works that extended to the poor of Castelrotto before his death, establishing that this custom was continued over the centuries in the month of October with the distribution of a loaf of bread and a bag of salt for every poor of the Community. He was subsequently buried in the chapel of the tower where still today his tomb is located. His nephew, Jakob Kraus, was ennobled by the Emperor Rudolph II of Hapsburg on 2 June 1607 and it was he who proceeded in large part to the demolition of the old castle, by the creation of a chapel to use for the village dedicated to Sant'Antonio, in addition to the realization on the part of the son Georg Kraus of a natural park (1675) accompanied by seven small chapels and three large crucifixes (Christ and the two thieves) that reflect some of the stages in the via crucis. In 1847 the family became extinct.

The main economic activity of the inhabitants was the rearing of livestock, thanks to the presence of vast alpine pastures surrounding, overcoming in the year 1600 of four times the sale of livestock held in Bolzano.

In Castelrotto each winter is represented a traditional rural marriage (Bauernhochzeit). This event revives the ancient uses of a marriage beween farmers. In fact from the early years of the Twentieth Century, until the fifties, weddings took place in winter, when the farmers were not engaged in their agricultural work. Today this traditional event became part of the tourist circuit, in which all the local population then wears clothes of the epoch, in particular the Bride will wear a hat that recall the color of the grass and the bridegroom will bring a carnation of greater dimensions with respect to those carried by other men invited to the celebrations for the Union.

Women instead are divided into those that carry a headgear often in wool, Turmkappe and those unmarried that carry a hat shiny and adorned with gold leaf. There is also the one who is assigned to the ceremony, which carries a big hat adorned with ostrich feathers in black and white. Usually the event foresees that different pairs to participate to a wedding procession, formed by sledges drawn on horseback, which also involved the relatives and friends of the pairs, all "decorated" for the event with the Trachter. The procession that leaves from the small church of San Valentino, follows the religious ceremony, and then a traditional banquet, followed by typical Tyrol dance.

Together with the celebration of the marriage peasant, always in Castelrotto are held almost in the same period the "wedding banquets of Castelrotto". In this occasion the main restaurants delight tourists with typical dishes that were once eaten during a marriage farmer.

Lappago di Sopra, 210, Campo Tures (Bolzano)
43.19 Kilometers from Castelrotto - Kastelruth
Paul Flora Museum
Inside the church tower of Glurns was set up this exhibition dedicated to the illustrator Paul Fl...

Via Henrik Ibsen 17, I - 39040 , Castelrotto - Kastelruth
Hotel Seelaus
Your Hotel in the Alpe di Siusi at 1,800 m directly at the slope and the hiking paths

Via Compatsch 8 I-39040 Alpe di Siusi , Castelrotto - Kastelruth
Zum Turm Hotel
Historic hotel in the enchanting village of Castelrotto is embraced by the Dolomites and is the p...

Kofelgasse 8 I-39040, Castelrotto - Kastelruth
Hotel Walther von der Vogelweide
In our opinion it is the best place to have a stay in Chiusa. It is located in a building in the ...

Città Alta 66, Chiusa (Bolzano)
8.21 Kilometers from Castelrotto - Kastelruth
Hotel Cima Dodici
If you like mountains, you can’t ignore a hotel that has the mountain in its own name.

Via B.-J.-Grasser. 4 - 39020, Glorenza (Bolzano)
77.29 Kilometers from Castelrotto - Kastelruth
Albergo Zur Post
In the heart of the medieval town of Glorenza, in the middle of the Venosta Valley, Hotel Posta o...

Via Flora 15 - 39020, Glorenza (Bolzano)
77.62 Kilometers from Castelrotto - Kastelruth
Hotel Restaurant Lilie
Among all the hotels in Vipiteno, the Hotel Lilie conveys a truly unique charm.

Via Geizkofler 15 , Vipiteno (Bolzano)
37.99 Kilometers from Castelrotto - Kastelruth
Cantina Valle Isarco
The winery is suitable for aromatic and fruity whites.

Sotto i Portici 3, Glorenza (Bolzano)
17.30 Kilometers from Castelrotto - Kastelruth
Laimburg Winery
Laimburg Winery, in the province of Bolzano, is part of one of the towns on the South Tyrolean Wi...

Sotto i Portici 3, Glorenza (Bolzano)
17.30 Kilometers from Castelrotto - Kastelruth
PUNI distilleria
Outside the mighty walls of Glorenza there is the PUNI distillery, the first and only whisky dist...

Lana: apple orchards, orchids and villages
A pink and white carpet. Those are the colors of the flowering of the apple orchards that dot the territory of Lana, in the province of Bolzano. It is a landscape that in spring is pervaded by a sweet fragrance - Lana is the largest European country by extension of apple orchards -, while the foliage of the trees are covered with a bright green and the water courses gurgle foaming for the abundance of water that comes from melting snow. L...
Continue
Recipe: Apple strudel from Trentino-Alto Adige
South Tyrolean cuisine is the expression of two great culinary arts: the tasty Tyrolean cuisine and the graft of imaginative Italian cuisine. All with a hint of Viennese, Hungarian and even Bohemian flavor. It is therefore the variety that distinguishes the South Tyrolean cuisine and there is no single recipe for its most famous dessert, the Strudel. If the filling mostly presents variation...
Continue
The legend and the parades of the fearsome Krampus
The Krampus are goat men with long pointed horns. Their skin is covered with a thick sheep fur, the face is hidden behind a terrifying wooden mask and dressed in dirty and untidy rags. Their arrival is announced by violent cowbells, sinister grins and chilling screams. Krampus roam the streets with whips and chains. Their mission is to unleash their anger against whoever they encounter on their way but above all they are looking for children who have been bad during the year, to punish them.
Continue