Share
The smallest town in South Tyrol, Glorenza is a very small medieval village surrounded by walls, which were built at the request of Ferdinand I of Habsburg and completed in 1580. Located in the center of the Venosta Valley, dominated by the Tarces hill, Glorenza it is the only inhabited center with arcades. 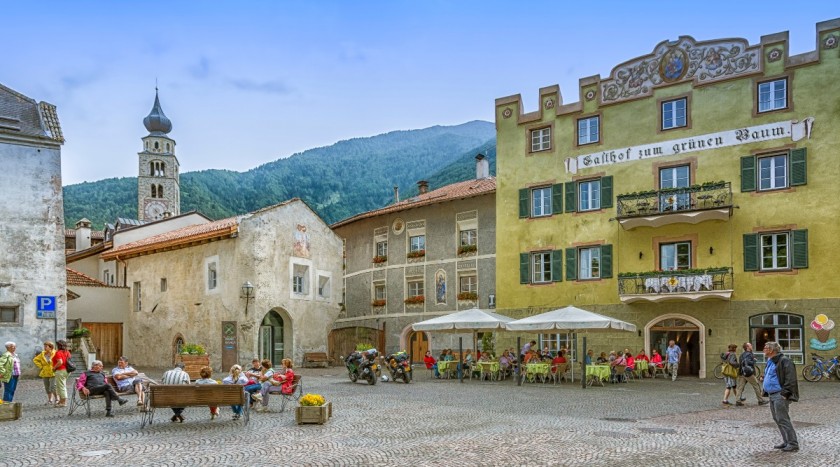 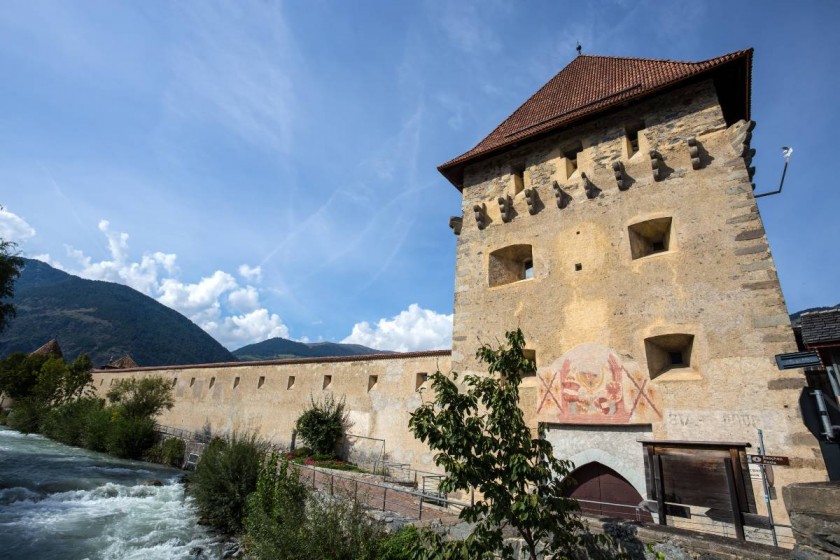 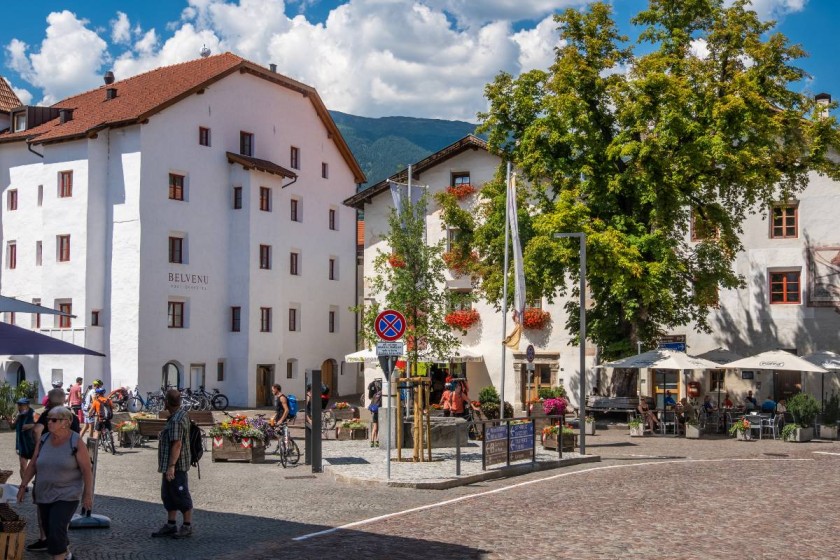 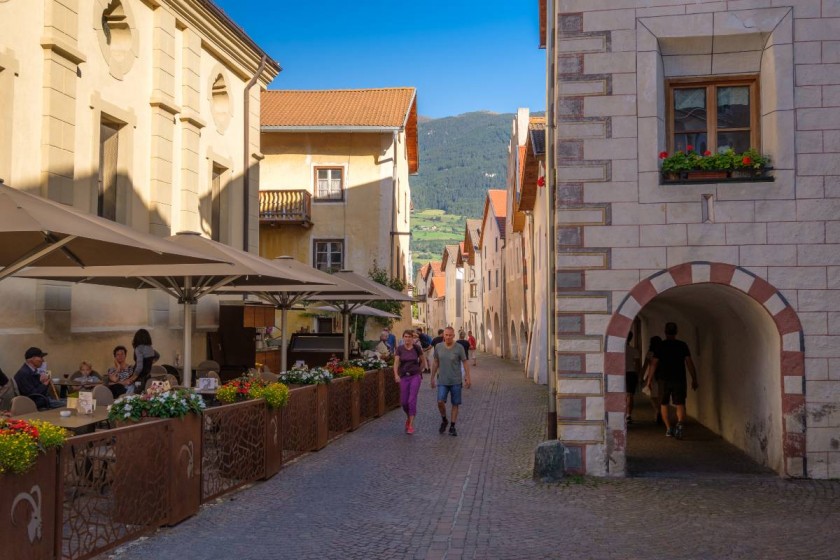 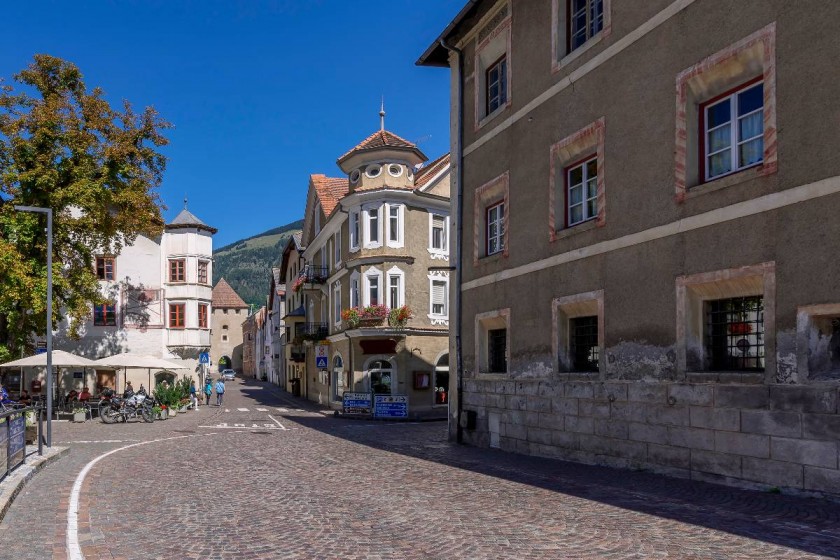 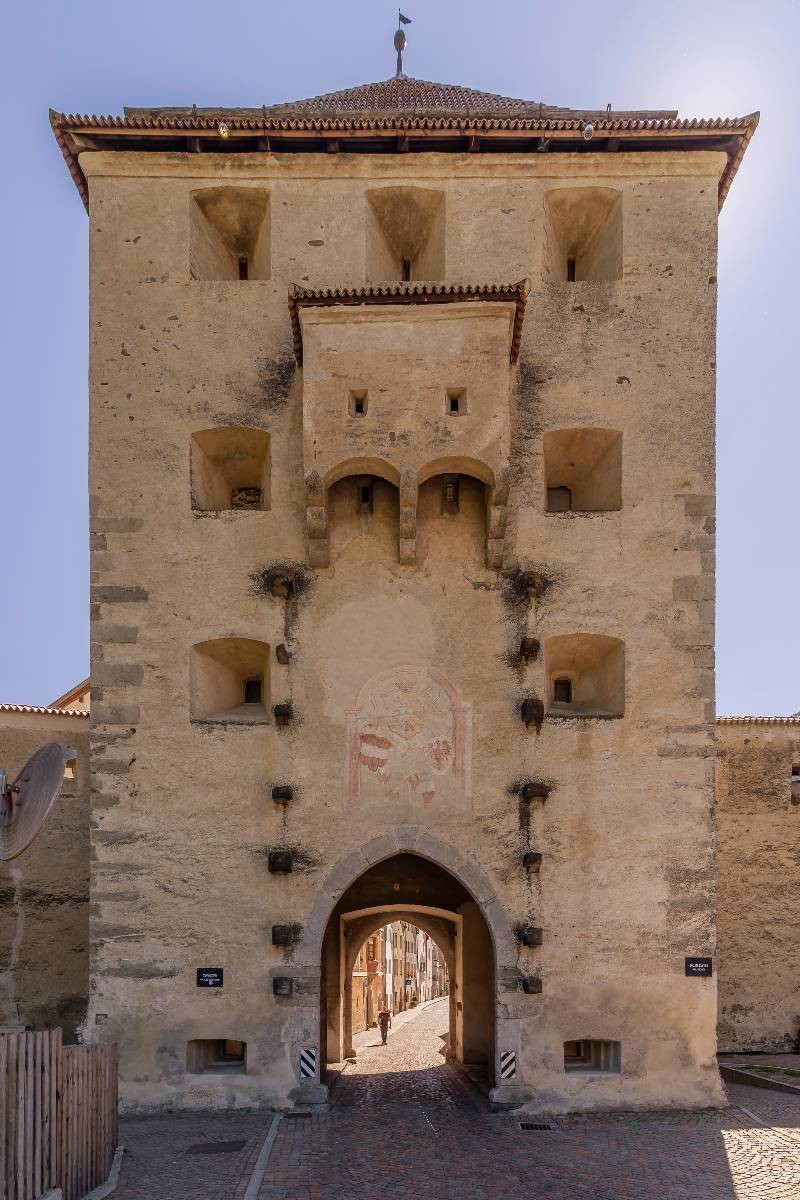 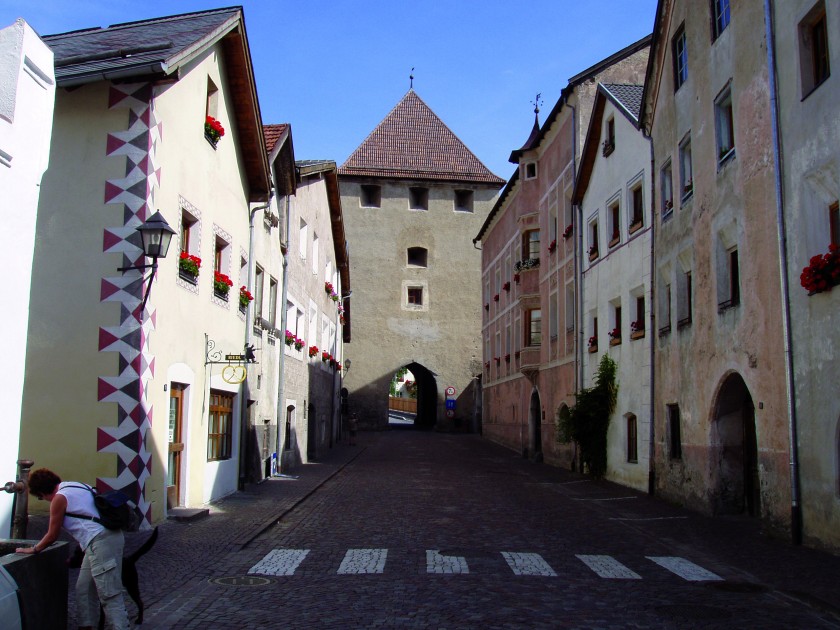 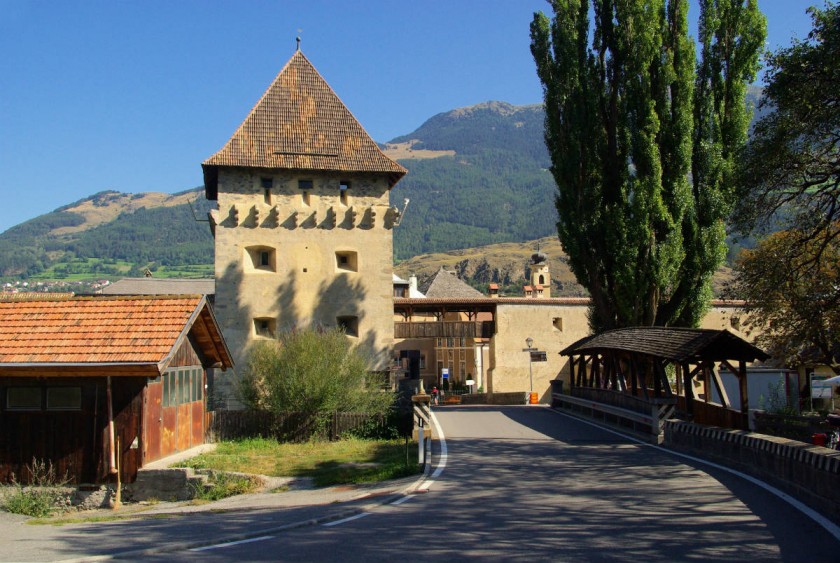 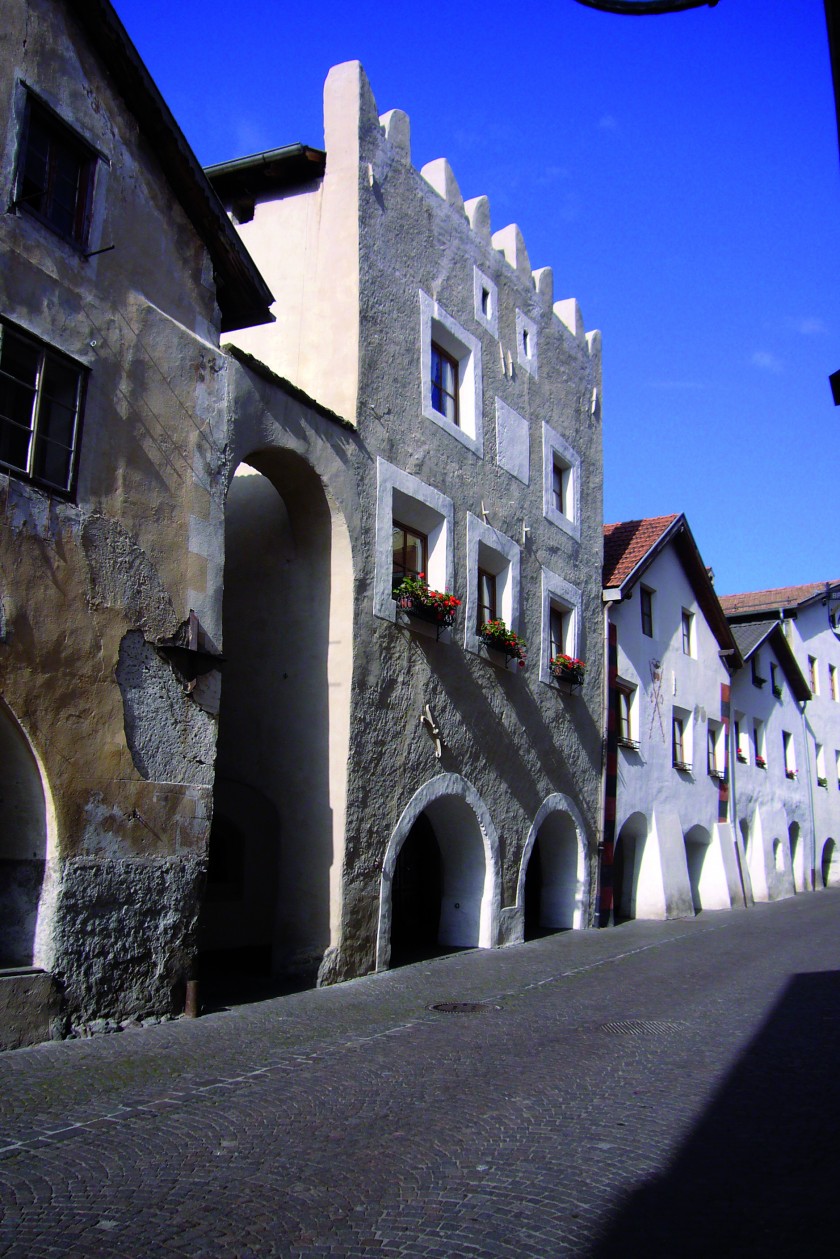 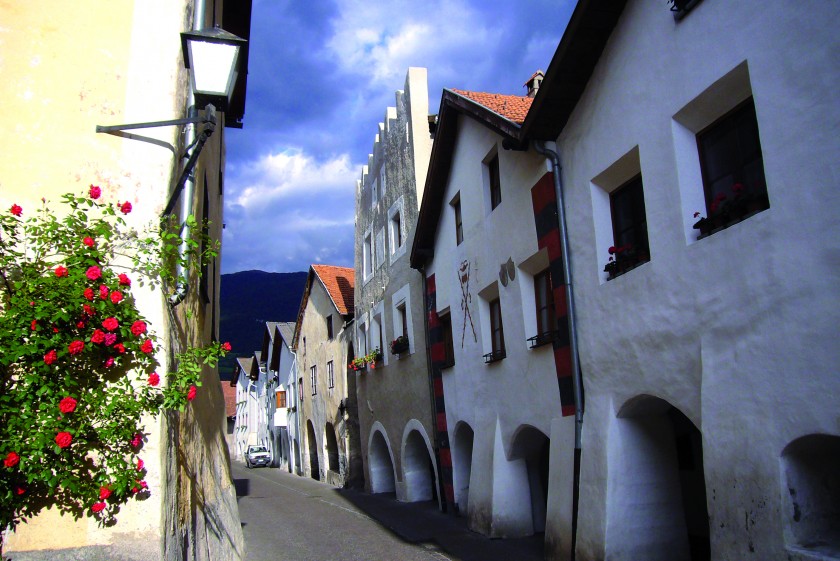 Glorenza (Glurns in German, Gluorn in romancio) is a village with fewer than 900 inhabitants. It is the smallest municipality in South Tyrol to enjoy the title of the city (in German Stadtgemeinde). In Glorenza there is the saying, "Our city is so small that we must go to the church out of the walls." It is located in the center of the Venosta Valley, dominated by the Tarces hill, known archaeological site. In its surroundings, to the west, you will find Tubre in Val Monastery, close to the border with Switzerland, while north you will meet first Malles, then Lake Resia and the same step.

During the Roman period we know that Glorenza was an important crossroads both for Via Claudia Augusta and for the ancient trade route to Switzerland. The first citation of the village dates back to 1163 and the name "Glurnis" is used, which means "ontaneto" or "hazel". In 1332, the city assumed such a commercial importance, which in the valley was imposed on the weighing of goods, the "measure of Glorenza".

The village also holds the monopoly of salt trade, which comes from Hall in Tirol. This picturesque medieval village, embraced by mighty walls, which protects it and at the same time creates an evocative atmosphere, has a town planning organization typical of the Middle Ages, although the architectural style of most buildings is from the 16th century. In the historic center of Glorenza, the only one with porticos throughout the Venosta valley, you will find numerous abodes of great artistic value, enriched by the typical Erker, and decorated with frescoes.

Churburg Castle
Churburg Castle rises not far from the village of Glorenza, in Trentino Alto Adige.
Località Churburg, 1, Sluderno, Glorenza - Glurns
Paul Flora Museum
Inside the church tower of Glurns was set up this exhibition dedicated to the illustrator Paul Fl...
Via Flora, 16-20, Glorenza - Glurns
Badger Castle
It is one of the best preserved castles in South Tyrol, owned by the noble Thurn and Taxis family.

Località Pruno, 19 - 39040, Campo di Trens (Bolzano)
71.56 Kilometers from Glorenza - Glurns
Monte Cavallo
A mountain in the Alps above Sterzing with a view over the South Tyrolean Alps, the Eisack Valley...

Kirchdorf 25 - 39040, Racines (Bolzano)
65.34 Kilometers from Glorenza - Glurns
Church of the Holy Spirit
One of the best preserved Gothic churches in South Tyrol, built in 1399.

Masseria 22 - 39040 Ridanna, Racines (Bolzano)
62.03 Kilometers from Glorenza - Glurns
Hotel Walther von der Vogelweide
In our opinion it is the best place to have a stay in Chiusa. It is located in a building in the ...

Christmas market in the old town of Glorenza

When the village excites: the most beautiful crib villages in Italy
In our country there are really many villages to visit, a cultural, landscape and urban wealth that is difficult to find anywhere else in the world. Medieval villages with historical walls, ancient churches and perfectly kept watchtowers, perched on high mountains or lying on the plain. Masterpieces of a world gone but still living in the ancient buildings and traditions of the people who live there. True treasure chests to be discovered in al...
Continue
Trauttmansdorff Castle, evening picnìc by the lake
The Gardens of Trauttmansdorff Castle in Merano stretch out in the sun on a total surface of twelve hectares and bring together in a natural amphitheater an incredible variety of landscapes and vegetation, breathtaking views of the surrounding mountain scenery and the elegant Merano. "Picnìc al Laghetto delle Ninfee" is the new initiative organized by the Gardens of Trauttmansdorff Castle, which allows you to spend an original experienc...
Continue
Bolzano: a trip to the villages of Ulten and Glurns.
It is after a sweet krapfen jam, savored in one of the premises of the historic center of Bolzano, which we leave its charming interweaving of alleys and squares to go to the discovery of two interesting centers located in the north west of Trentino-Alto Adige, Ulten and Glurns. With the elegant streets of the center of Bolzano still in the eye, we walk along the Adige valley towards Merano until we reach Lana, a town located at the entra...
Continue
Recipe: Apple strudel from Trentino-Alto Adige
South Tyrolean cuisine is the expression of two great culinary arts: the tasty Tyrolean cuisine and the graft of imaginative Italian cuisine. All with a hint of Viennese, Hungarian and even Bohemian flavor. It is therefore the variety that distinguishes the South Tyrolean cuisine and there is no single recipe for its most famous dessert, the Strudel. If the filling mostly presents variation...
Continue
Four steps ... in 4 fortified villages
4 Fortified villages that intrigue with their defensive face. And within the walls that surround centuries of history, here is the ancient core of villages that seem suspended in time and that have much to tell. Masterpieces of art kept tenaciously in time within defensive walls. The fortified villages are a continuous discovery, constellate Italy and represent a unique - indeed - to be protected and known. We offer you four, to start this journey in search of excellence and value.
Continue
10 things to do in 10 Italian villages, great classics and unexpected surprises
Did you know that in the village of Glorenza there is the only Italian whiskey distillery? And what is the Pinocchio Park in Collodi? Curiosities and ideas to live as protagonists all the magic of the villages of our Peninsula... Here are 10 Italian villages to discover and experience with many things to do. Ideas and curiosities for all tastes and for every season.
Continue
Glurns, the legend of the village that opened a court case against the mice
Although it may seem absurd, it was not so rare that in the Middle Ages there were court cases against animal species. This seems to emphasize the link between man and "beasts" in those times. In fact a court case, also with a defense lawyer, it is said in Glurns's legend, which in 1519 was literally invaded by a rodent population. These were so many to push the peasants of Stelvio, having threatened their crops, to turn to the judge of Glorenza to put the mice under prosecution.At the hearing were also invited the mice that...
Continue
Christmas markets not to be missed in the villages in December
Si avvicina il Natale e con esso inizia il periodo dei mercatini natalizi. Naturalmente questa occasione offre una suggestiva possibilità ai borghi di mostrarsi in tutto il loro splendore vestendosi di luci, bancarelle, decorazioni, presepi viventi, casette di babbo Natale e naturalmente abeti addobbati. La tradizione vuole, infatti, che i mercatini di Natale (o mercati del bambin Gesù, come li chiamano i tedeschi - Christkindlmarkt) siano delle manifestazioni dove poter trovare il meglio che un territorio abbia da offrire i...
Continue