Share
The medieval village of Gromo stands on a rocky promontory located in the Bergamo Prealps. With its forges, it was one of the most important centers of iron working and the production of weapons, shields and armor, so much so as to be called the "little Toledo". 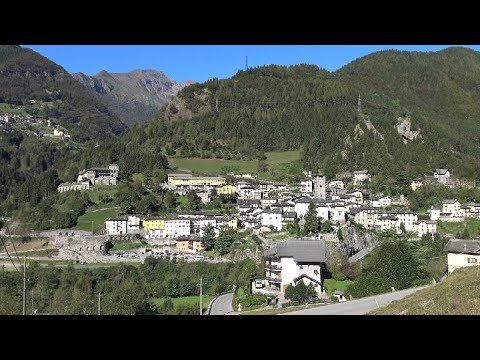 Gromo Gróm (in dialect bergamasco) is located in the southern Alps indicated with the term the Bergamo Prealps. Located on the right of the river Serio, in Val Seriana is characterized for its houses with roofs of black slate pióde (in dialect Bergamo). During the Middle Ages was nicknamed "the small Toledo", being equipped with numerous forges, that made it a very important center for the working of iron and the consequent realization of sidearms, halberds, shields and armours. The toponym of the village of Gromo derives from the latin Grumus, that means hill.

The ancient silver mines on the territory of Gromo and Ardesio are documented by notarial acts subsequent to 1026 year in which the bishop of Bergamo Ambrogio II, will resume the rights on the territories of the Val Seriana after the transaction with the Monastery of St Martin of Tours that he had received from Carlo Magno in 774, but that some noble families of Bergamo had occupied. Difficult to locate the exact position of the silver mines on Monte dry in Ardesio, while those of Gromo were found in the locality of Coren stapled that despite being a mine closed is still visible. The silver mined in the Alta Val Seriana will be the main supply of the mint of Bergamo for the issuance of the parchment which remains documentation until 1302.

Damnatio ad metalla, so called Pliny the Elder (23-79 d.C.) in his Naturalis Historia Christians condemned by the Romans to cavar metals in the mines of the Alta Val Seriana. This and some tracks in weapons, Cocci, testify to the presence of inhabitants on the territory since the Roman era, as well as a refuge for the first Italic people from the barbarian invasions. In 774 the king of the Franks, Carlo Magno, donated the territories of the Alta Val Seriana to the monastery of St Martin of Tours and that of Saint Denis De Paris. Later in 1026 the Episcopate of Bergamo with the Bishop Ambrose II if ne riappropriò in exchange for other farms, reserving the right to revenues of the extraction and processing of silver and iron certainly present in the valley, at the beginning of a period of serious disputes between the secular power, represented by the feudatory, and ecclesiastical power, represented by the Bishop. Also the first written documents which attests the existence of the village date back to that period: appear for the first time the expressions "vallis Ardexie seu clots" or "curia Ardesii er Grummi", precisely to indicate Ardesio and Gromo, those that will become the rural communes. Gromo became an autonomous municipality as rural vicinia in the first part of the XIII century, was in fact drafted the first statute on 30 March 1238, in the garden of the church of the Saints Giacomo and Vincenzo di Betuno of Gromo, from 12 Accounting and 4 notaries who entrust themselves to the podestà Nantelmo from cream. There followed a period of economic prosperity, with consequent significant architectural development: the Castle of the XIII century, was added the fifteenth-century Palazzo, now property of the town, the Church of S. Gregory and the square as well as it can still be seen today. In 1428 the Republic of Venice expanded its domain also to the town of Bergamo and its contadi, and did not escape certain to the latter the economic potential that offered the Alta Val Seriana, and even the quality of sidearms produced by gunsmiths of Gromo. This favored new trading relationships beyond the Lombard territory, thus becoming the country known as "the small Toledo". But during the XVII century the socio economic of the country changed profoundly. On 1 November 1666 a disaster struck the country: a disastrous landslide detached from monte overlying, fell in the torrent Goglio, destroying the 27 forges for the working of iron, causing the death of 67 inhabitants, their homes and thus placing dramatically and systematically to an end the period of wealth and prosperity.

Certainly deserve a visit the Castle Ginami, Palazzo Milesi, the Church of San Giacomo and the Torre del Lavanderio.

Immersive and suggestive is the procession that takes place on the evening of Good Friday along the ancient streets of the country. A nocturnal processione composed of hundreds of believers with the lumens turned on that, starting from the Parish Church, playing sadly a funeral march, accompanying the statue of the Dead Christ, work created by the Fantoni, until the square while in the meadows and on the slopes of the mountains, small fires made of rags soaked in oil and grease represent the vicissitudes of the Gospel on Mount Calvary In that day you use eat the maiassa, a special cake, made of yellow flour, onions, apples and figs, seasoned with oil and then baked in the oven.

Via Castello - 23036 , Teglio (Sondrio)
24.80 Kilometers from Gromo
Collegiata di Santa Eufemia
The Church of Santa Eufemia, in honor of the patron saint, is located in the main square of the v...

Via Roma, 3 - 23036 , Teglio (Sondrio)
24.99 Kilometers from Gromo
Municipal Casino
The Casino together with the Grand Hotel cooperated to create an effective tourist attraction for...

V.le Papa Giovanni XXIII,20 , San Pellegrino Terme (Bergamo)
25.67 Kilometers from Gromo
Cornabusa Sanctuary
The Sanctuary of Cornabusa is located near the village of Sant'Omobono Terme, in the Imagna Valley.

Viale Papa Giovanni XXIII, 30, Sant'Omobono Terme (Bergamo)
36.23 Kilometers from Gromo
Ancient Icebox
The ancient icebox of Amagno, in the Imagna Valley, is located near the village of Strozza.

località Amagno, 31, Strozza (Bergamo)
34.81 Kilometers from Gromo
Municipal Casino
The Casino together with the Grand Hotel cooperated to create an effective tourist attraction for...

Via Bartolomeo Villa, 16 - 24016, San Pellegrino Terme (Bergamo)
25.00 Kilometers from Gromo
Villa Crespi
Villa Crespi was the manor house of the Crespi family in the village of Crespi d'Adda, in Lombard...

The legend of the Rosì of the village of Gromo
Once upon a time there was Rosì, a robust, blond brigand with invulnerable skin. The lead bullets that the gendarmes of the time fired with archibugs did not hurt his skin. Rosì lived by theft that he committed night-time by entering the houses of unlucky villagers in the village of Gromo to steal cheeses, eggs and other kind of food. The house of Rosì was ancient, with stone arches and long dark tunnels that reached the village square and even up to the Serio River, was surrounded by the forests of the Serian...
Continue