Share
Located in the province of Asti, the village of Moncalvo has officially earned the title of "Italy's smallest city". The town is easily accessible from the road that connects Asti and Casale Monferrato. A real jewel that is absolutely worth a visit. 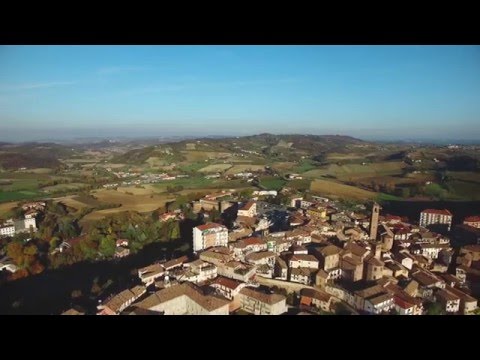 Having acquired the title of "the smallest city in Italy", the village of Moncalvo is a real jewel that is absolutely worth a visit. Art lovers can start their tour at the Museo Cittadino, where they can admire works by Modigliani and Chagall and enjoy one of the many exhibitions of local and international artists hosted in the rooms of the museum.

Those who visit Moncalvo are almost obliged to stop at sunset, at Piazza Carlo Alberto to admire the suggestive panorama from the ramparts, the only remaining sign of the fortified castle present in antiquity. The ramparts are a real belvedere that opens onto the beautiful hills of Monferrato.

Piazza Carlo Alberto joins Piazza Garibaldi forming a single large open-air area with two particular treasures: in the first there is the only Synagogue in Europe to have been built in a central square, while in the second there is the Historical Theatre, in operation since 1878.

In the evening Moncalvo is transformed into a charming medieval village, with an old town with a retro flavor made of colorful signs and historic buildings. The central Via XX Settembre, the ancient beating and commercial heart of the city, is still today a focal point of the village, where you can enjoy a pleasant walk.

Among the main historical palaces of the city we must surely mention the House of the Marquis of Monferrato, Palazzo "Testa Fochi" and Palazzo "Mancorda", dating back to the Renaissance period.
House "Lanfrancone" is one of the historical palaces, "victim" of many restorations and renovations that have transformed its ancient gothic aspect into something more nineteenth-century.

The oldest church in the village is the one dedicated to the Madonna delle Grazie, dating back to 1500 and until 1623 it was considered the parish church of Moncalvo. The title then passed to the Church of Sant'Antonio Abate, while from 1783 the central church of Moncalvo became the one dedicated to San Francesco. The latter, moreover, is located in a very particular place: the relief of Monteguardo, from which you can enjoy a beautiful view of the green surroundings of Moncalvo.

What to eat in Moncalvo
In the evening you can choose one of the many small restaurants in the historic center to taste typical dishes and enjoy an intimate and romantic atmosphere.
One of the most characteristic products of the area is certainly the white truffle to which, in October, is dedicated one of the most beautiful fairs in Italy. On this occasion it will be possible to taste different typical dishes based on this precious and very rare mushroom, as well as to buy delicacies to take home. Every year this fair hosts thousands of visitors intrigued by the particularity of the white truffle.

The Festa delle Cucine Monferrine, instead, is held in summer and is another wonderful opportunity to visit Moncalvo and taste typical delicacies of the area. In this event pro loco and citizens lend themselves to the preparation of traditional and ancient recipes, handed down over time from one generation to another. It is a moment of absolute conviviality, during which you can completely immerse yourself in the past and rediscover ancient traditions and folk tales.

In December, Moncalvo hosts the "Fat Ox Fair", an event where you can taste the traditional dish of the city: the mixed boiled meat. Another characteristic event of this festival is the ox parade through the streets of the city, studded with lights and suggestive Christmas lights.

This beautiful village is perfect to visit at any time of the year, as well as being a great place from which to leave for wonderful bike rides. The hills of Monferrato, in fact, offer routes suitable for every level with panoramic views absolutely not to be missed.

As in all of Monferrato, Moncalvo also eats and drinks well. There are many food and wine specialties, some with a municipal denomination (De.Co), such as rabbit and cabbage agnolotti, cooked salami, grissia (a hard dough bread). The De.Co is also owned by the Bue Grasso fair, now close to its 400th edition, dedicated to the white giants, and to the sumptuous Moncalvo boiled meat, which is tasted all year round with typical sauces. Other typical dishes are the boiled and 3 roast agnolotti, we boast producers of extra virgin olive oil and polenta flour processed as in the past. There are breeders of cattle and goats in the area, the latter for the processing of dairy products. Also noteworthy is the cultivation of hazelnuts and the processing of processed products. To frame these tasty dishes is the white and red wine: grignolino, barbera, freisa, chardonnay.

The legend of Aleramo and the birth of Monferrato
This story begins in Sezzadio, near Acqui Terme, where Aleprando - a German nobleman - and his wife, on a pilgrimage to Rome, were forced to stop in the castle of the local lords because the woman was caught in labor. Here was born Aleramo (from the vernacular Piedmontese "Aler", cheerful). After a few months the parents resumed the pilgrimage leaving the infant in the hands of a nurse and the two never returned. It is not known if it was due to an illness or an ambush along the way, but they were lost track. While waiting for the return ...
Continue