Share
Cocconato is one of the villages of Monferrato for which it is possible to say that it is in a privileged position. It offers incredible panoramic views and, thanks to its geographical position, it enjoys a particularly mild climate that favors the growth of plants typical of seaside resorts. Entering its historic center is like entering a small mountain village, where the narrow streets wind up towards the church that surmounts the village and offer enchanting views of the roofs every time you turn back. 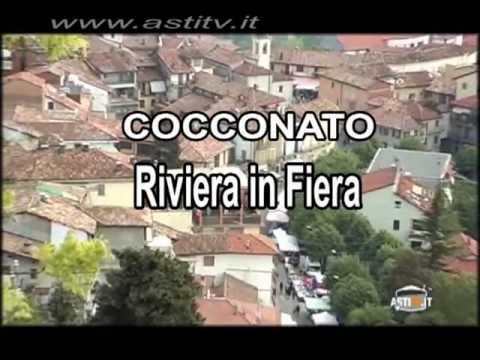 Cocconato is a town of about 1600 inhabitants located north west of the Asti province. High up on a hill (491 m.asl) it overlooks the valleys of the lower Astigiano. Thanks to its special microclimate the countryside has olive and palm trees, and a moltitude of flowers that gave birth since early in the 19th century to the name “Riviera del Monferrato”.
Always very active in agriculture, commerce and catering Cocconato today keeps faith to its tradition and is rich of vineyards and wineries, livestock farms, well known fashion operators and artisan laboratories.
Also presents are the main services such as schools, health district, library, banks, rest home, post office, Military Police (carabinieri), road and rail links.
This pleasant and relaxing environment together with the many public events – cultural, gastronomical and folkloristic – are a sure actraction for an increasing number of visitors from all over Piedmont  and other regions.
Given the favorable position, the town is easily reachable from Asti, Turin and Milan. The Asti-Chivasso state road grants quick access to the main highways: Torino-Milano (Chivasso est exit) and Torino-Piacenza (Asti est exit) and to the airports of Torino Caselle and Milano Malpensa.
In 2019 Cocconato is proud to be officially enlisted among the “Borghi più belli d'Italia”, (Most beautiful villages in Italy).


The origin of Cocconato is not certain, as is the etymology of its name. One of the hypotheses is that it derives from the Latin “cum conatu” meaning reachable with difficulty. On the contrary the historian De Canis believes in a corruption of “acutus” in “cuccus” or “coccus” i.e. all that lays at the top of mountains or hills.
Perhaps an ancient settlement of the Ligurians, it is now established that the first inhabited nucleus of the town dates back to Roman times and stretched out in the delightful valley of Marcellina, just below the present concentric location. Tradition has it that this town – more realistically a village - was founded by the Roman emperor Caius Marcellus, hence the name Marcellina. Choice of location for the settlement apparently was due to the fertility of the land and its being conveniently near the important Roman road connecting Asti to Industria (the present Monteu da PO).
Up on the hill overlooking the valley stands the parish church dedicated to the Madonna della Neve, on Roman foundations. It was the church of Marcellina and kept its role as parish church even in later times when the inhabitants had moved at the foot of the castle.
Connected to Marcellina is the legend of the Pietra Cagnola (Cagnola Stone), a massive gold dog-shaped simulacrum that was placed on the harrow, believing that it had the power of making the land fertile. Legend has it that the Pietra Cagnola and a bust of Caius Marcellus were thrown in a deep well where they still are hidden.
No trace exists of how or why Marcellina was abandoned. Possibly repeated barbarian invasions and raids convinced the inhabitants to settle higher up where the town of Cocconato now stands.
Another legend mentions the presence of two castles located behind the Rocca in the Bausignano area This was called in old times “Castello bruciato” (Burned castle) a possible reference to the end through fire of one of the castles.
More information is available on the second castle. It was built around the year 902 by the Radicati family. Perimeter of the fortified manor ran along Via Vittorio Veneto, Via Pinin Giachino, Via Montegrappa and Via Montecapra. Direct access to the castle was granted by a drawbridge at Porta Castello on the north. A second entrance opened where the present Via Roma is. It was called Porta del Mercato Vecchio (Old Market door) and allowed entrance to the fortified area. Near the Porta del Mercato Vecchio stood a lookout tower, destroyed in 1378 by popular uprising.
Apparently Counts Radicati played a leading role in the local geopolitical panorama in the fourteenth and fifteenth century thanks to powerful alliances and wise diplomatic maneuvers.
They succeeded in creating their own little state enjoying autonomy and privileges up to the end of the sixteenth century. Their dominion covered most of the lands north west of Asti and some at present belonging to the Turin Province. In 1530 they were granted the right to coin money and their mint was opened in 1581 in Passerano and subsequently closed down in 1598 as it mainly produced false coins.
The diplomatic policy of the Radicati saw them deployed first as feudal lords of the Vercelli bishop, later submitted to Asti, later still allied to the Marchese del Monferrato and finally connected with the powerful Visconti di Milano. Since 1450 there was the cumbersome presence of the Savoia, the royal family that much later in the nineteenth century succeeded in unifying Italy under their rule. Cocconato was finally annexed to their dominion in 1586.
As to the fate of the remaining castle history says that it was partially destroyed at the beginning of the 14th century and finally mine blown in 1556  by French or Spanish soldiers who were confronting each other in this area. As witness of the destruction remained the ruins of the tower. It was rebuilt in1836 not far from where the original stood and is to this day considered the symbol of the Riviera del Monferrato.
In the XVII century Cocconato experienced a period of decline due to the plague and recurring lootings by enemy troops. Its strategic position as the last Savoy outpost on the border with the Marquisate of Monferrato, Cocconato was not spared the frequent war actions of this period.
In spite of the troubled times of this century the inhabitants of Cocconato found strength and funds to build the two main churches of the country dedicated respectively to the  SS: Trinità and to S. Maria della Consolazione.
With the advent of Napoleon  and subsequent Piedmont annexation to France, Cocconato obtained increasing power, first as canton  and later as district head town. Also in this period the District Court and the College were established. In the nineteenth century Cocconato experienced a new economical rebirth thanks to the thriving Saturday market and its craft, commercial and cultural activities. There were no less than seven bank branches and quite a number of restaurants whose tradition has survived to this day. The end of the XVIII and the beginning of the XIX century other important public services were established: such as a district hospital, railways station, schools, kindergarten and public lightning.
Since 1935 Cocconato belongs to the Asti province established  in that year.

Synagogue
Built during the creation of the ghetto of Moncalvo, is known to be the only one in Europe overlo...

Via Po, 9, Fontanetto Po (Vercelli)
16.22 Kilometers from Cocconato
Tripping stones
They are part of the project of the artist Gunter Demnig, installed in January 2020 on the occasi...

Via Ferraris, 3 - 14036, Moncalvo (Asti)
17.69 Kilometers from Cocconato
House of the Marquises of Monferrato
Building dating back to the middle of the fifteenth century, currently a private home

Via Caccia, 5 - 14036, Moncalvo (Asti)
18.03 Kilometers from Cocconato
Civic Theatre
Located near the ancient guardhouse of the castle, the Civic Theatre hosts every year a season of...

Piazza Carlo Alberto, 13 - 14036, Moncalvo (Asti)
18.19 Kilometers from Cocconato
Tripping stones
They are part of the project of the artist Gunter Demnig, installed in January 2020 on the occasi...

Vicolo 27 Gennaio - 14036, Moncalvo (Asti)
16.56 Kilometers from Cocconato
Sferisterio
The Sferisterio of Moncalvo for the game of elastic ball and tambourine, is located in a suggesti...

Piazza Carlo Alberto - 14036, Moncalvo (Asti)
18.08 Kilometers from Cocconato
House of the Marquises of Monferrato
Building dating back to the middle of the fifteenth century, currently a private home

Via XX Settembre, 61 - 14036, Moncalvo (Asti)
18.01 Kilometers from Cocconato
Lanfrancone house
Located in Moncalvo, it dates back to the 13th century

Via 20 Settembre - 14036 , Moncalvo (Asti)
18.23 Kilometers from Cocconato
Belvedere Bonaventura
Viewpoint from which you can observe the charm of the Monferrato hills