Share
Important tourist resort, both summer and winter, the largest in the Aosta Valley, Cogne is one of the world centers of cross-country skiing. Known for its handmade bobbin lace worked by women in bobbin lace, an activity practiced in the village since the 16th century.

A look at Cogne 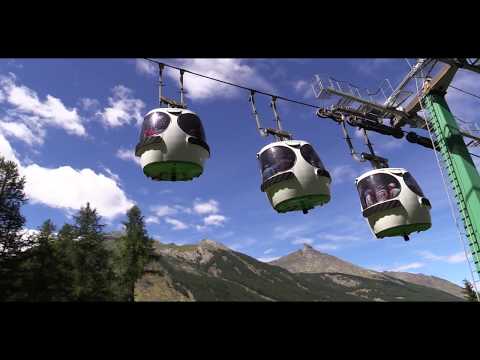 Cogne is the largest village in the Valle d'Aosta and is at the feet of the Gran Paradiso massif, which gives its name to the homonymous national park.
Considered one of the most beautiful places in the entire Alpine arc, the valley preserves fascinating environments populated by a rich alpine fauna.
The capital of Cogne, formed by the two hamlets of Veulla and Sonveulla, is situated next to the vast lawn of Sant’Orso, an authentic green heart of the town. Branched in the valleys, the best known is the Valnontey, which leads to the slopes of the Gran Paradiso.

The population of Cogne has origins from the Franco-Provencal valleys. Originally the economic, commercial and communication routes were not directed towards the Valle d'Aosta, but towards the aforementioned valleys.
Since the Middle Ages the town was known for its magnetite deposit and until the 1970s Cogne was an important mining center for the extraction of iron ore, whose main mining strands were exploited in the mines of Colonna, Liconi and Larsinaz. The Mineral extracted (mainly magnetite) was then sent to the Cogne steelworks in Aosta for processing.
One of the main monuments of Cogne is the Castle, located in the center of the village next to the church of Sant’Orso.
It is an ancient royal residence recognized as an Italian national monument, but today it cannot be visited.

An important tourist destination, both in summer and winter, Cogne is one of the world's leading cross-country skiing centers and still today, traditional characteristic Valle d'Aosta sports such as palet, tsan, fiolet and rebatta are practiced.
A major tourist attraction is the Gran Paradiso National Park, the first Italian national park that protects both a remarkable flora and fauna biodiversity.
Cogne is also known for its handmade bobbin lace worked by women at lace pillow (traditional work tool) and called les dentelles de Cogne, an activity practiced in the village since the 16th century. These are made to embellish various objects, such as tablecloths, sheets and typical costumes of the valley to which the permanent exhibition of the Mèison di pitz is dedicated.

The cultural heritage of Valle d'Aosta is characterized by the practice of four main traditional sports:

The Palet, traditional Italian game. Until 1975 it was played spontaneously according to rules handed down orally.
A sport on the rise, the only one of the traditional Valle d'Aosta sports to cover almost the entire regional territory.
Similar to the game of bowls and pétanque, you can compete in pairs or trios and win at 21 points in teams or 13 points in individual competitions.
The game instrument used is an iron disk also called palet, engraved to better adhere to the ground, of variable weight, between 800 g and 1200 g, with a diameter between 10.5 and 12 cm and a thickness of 1 cm.
The playing field is a flat ground of beaten earth and of small dimensions: 16 meters long and 2 m wide.
The game consists in throwing the palet to hit or get as close as possible to a target, a palet of iron smaller and painted white, called bolìn (a kind of boccìno).


The tsan, an ancient and popular baseball-like team sport that is practiced in two championships, a spring (more important) and an autumn one. The two teams are divided between the home team and the visiting team and the host team tracks the field. The game is divided into two distinct phases, in the first phase, as in baseball, the player of a team positioned at the launch (tsachà), and the other team deployed in defense. The pitcher must hit the tsan (wooden ball), balanced on the pertze (long pole), trying to make it fall inside the playing field.
If this happens you get a boun-a. The defending team must instead intercept the tsan with the palet before it touches the ground; if this happens, or if the tsan ends up outside the field 3 times, the pitcher is eliminated and replaced. Once all the players on a team have taken steps, they move on to the second phase.
This provides for a new series of throws, equal in number to the boun-e made in the first phase of the game, unlike this time the tsan is lifted in the air (servìa) by an opposing player. The batter uses a kind of racket to control the servia, bouncing the tsan once or twice, and then hurling it as far as possible.The distance reached becomes a score and every meter is 1 point. Once all the pitchers have made the series they were entitled to, the teams exchange roles. A game requires both teams to try twice per phase and win the team that scores the most meters with paletà (throws).

Ifiolet, formerly called baculot or fiollet, is an individual or team sport in which a ball is beaten with a stick. The playing field is triangular in shape and is at least 150 meters long; on it the players are compared, individually or in teams of 5 elements each. This sport requires a simple equipment: a smooth and rounded stone (the pyre), an ovoid ball (the fiolet) and a stick called (eima) with the enlarged end (maciocca) to better hit the fiolet. On the ground, starting from the stone from which the fiolet is launched, concentric semicircles 15 meters apart are traced with a string; the auctions are marked with progressive numbers from 1 to 13 and allow the counting of the points obtained after each launch.
The game requires the player to place the fiolet on the stone and hit it lightly on the "beak", making it splash into the air and then hit it on the fly and throw it as far as possible. The distance from the stone to the point of arrival of the fiolet determines the score. The five players take turns at launch and each player has 30 throws at their disposal.

The rebatta, called game in "air", "discipline of throwing ball with stick" is played in teams or individually. The aim of the game is to throw the ball as far as possible by hitting it with a club. The tools used are: the ball in metal or in wood with rivets to increase weight, called rebatta, from which the game takes its name; the mesetta or leima in wood, or the club with which the rebatta is struck, about one meter and forty centimeters long; the fioletta or levau, a support the pipe-shaped wood used as a support and lever for touching the ball.
The team consists of five players plus two reserves, each of which has 20 "jokes" available.The playing field is a meadow on which lines 15 meters apart are drawn in a herringbone pattern. The player, from the batting zone (plase), lays the rebatta in the hollow of the small flake, strikes the spout with the masetta, making the ball jump into the air, which is hit on the fly to throw it as far as possible and achieve the greatest score.
If the rebatta falls out of the field there are possibilities of assigning the point, but agreed by the captains and the marquapuoins. If the rebatta falls on a line between one sector and another, the score of the lower sector is assigned. The action of the measure consists of the contact, that is a first movement in which the player hits the flask with the masetta, making it lift from the rebatta on which it was placed, and the actual bar, or the action of the player to strike with the masetta the rebatta suspended in the air after the touch to launch it as far as possible on the playing field.

località Chez Sapin, 86, Fénis (Aosta)
17.58 Kilometers from Cogne
Fénis Castle
The Fénis castle is one of the most famous medieval castles of Aosta valley.

Forte di Bard, Bard (Aosta)
30.40 Kilometers from Cogne
Vachéry Tower
The medieval tower in the locality Vachéry is located near the village of Etroubles, in Aosta Val...

Frazione Arnad le Vieux, 45, Arnad (Aosta)
28.56 Kilometers from Cogne
Alps Museum
The Alps Museum of Fort Bard in the Aosta Valley, is dedicated to the mountainous system of the A...

Cogne is present in issue 3 of our digital magazine e-borghi travel.
Read it now!

Gran Paradiso…the Garden of Eden
The history of the National Park of Gran Paradiso is bound to the Savoia family’s one. Under the King Vittorio Emanuele II it became the “Royal Game Reserve” in 1856 and this contributed to the saving of the ibex from extinction, its surface was wider than the present national park. It’s the same animal that appears on the emblem of the oldest park of Italy that was founded in 1922 with the decree signed by the King Vit...
Continue
Recipe: the Seupetta from Cogne
the Seupetta from Cogne is a poor and ancient dish from the Aosta Valley tradition, a soup made with rice and very tasty fontina cheese. What most intrigues is the presence of rice, which is certainly not a typical production of the Valle d'Aosta, but which in the past was a bargaining chip with the products of the mountain pastures, being a food with long conservation and therefore particularly suitable for set up food reserves for the long and isolated winter at the foot of the Gran Paradiso. Let's see how to...
Continue