Share
Bard (Bar in the Valdostane patois) is the smaller village of the Aosta Valley. Located in the narrowest part of the whole to d'Aosta, in the point where the rocks descend steep toward the Dora Baltea. At this point the Rijeka performs a meander, from where in the top of the rock stands the famous Fortress.

A look at Bard 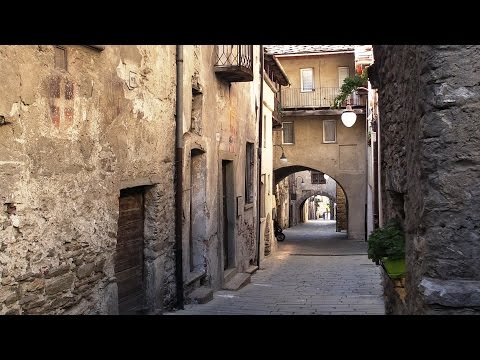 The toponym "Bard", should derive from the Celtic "bar" designating a fortress, a fortified place, and not from the french word "bar" indicating the barbel, freshwater fish that is found on the municipal coat of arms. It was dominated for a long time from the Lordship of the Bard, which extended its protection on all the nearby Valle Champorcher.

The medieval village of Bard and its monumental houses
At the foot of the Fortress, the medieval village of Bard is one of the most charming and best preserved in the entire Valle d'Aosta; since antiquity for its strategic position, has always been a secure bastion against invasions, and it still preserves the style to arcs rich of mullioned windows with windows crusades. In the village you can admire the monumental houses of rare beauty, such as the House of the Bishop, home of the sundial, Casa Valperga, Casa Challant, Casa Ciucca, and the elegant Palazzo dei Nobili Nicole, recent accounts of Bard. Many clubs, shops, bars, restaurants and hotels are present in the village.

Near the fortress there is an important archaeological site with engravings and a "women's chute". In its interior it is located the main Bard Museum circuit, with expositions of multimedia museum of the Alps and the Alps of the boys. A fortress that, reborn from its ashes, now represents the main center for the dissemination of Alpine culture.

By Bard finally goes the route of the Via Francigena, coming from Arnad and Hône, after crossing the bridge on the Dora Baltea, towards Donnas and Pont-Saint-Martin.

Some wrote about Bard:
'It is recessed, as a wedge, between two mountains. On the one hand is the one that supports the famous Fort (...), on the other hand is another monte even higher (...). It is the path, by means by a narrow street, with old acciotolato still marked by the wheels of the carriages of the Roman legions. The houses are all ancient and have portals, windows and beautiful balconies in carved stone (...)"

Village of Bard
Municipality of Bard

The Municipality is part of:
I Borghi più belli d'Italia
Villages of the Via Francigena

Fort Bard
Fort Bard is a fortified complex of Aosta Valley.
Forte di Bard, Bard
Alps Museum
The Alps Museum of Fort Bard in the Aosta Valley, is dedicated to the mountainous system of the A...
Forte di Bard, Bard
ArchaeoPark - Bard Archaeological Geosite
the ArchaeoPark of Bard, door of the Aosta Valley, has always covered a strategic role of primary...
Forte di Bard, Bard
Roman Gaul Road
Nearby the Fort of Bard are still visible the ruins of a stretch of the ancient Consular Road.
località Strada Romana delle Gallie, Bard
Shrine of Notre-Dame-des-Neiges
The Shrine of Notre-Dame-des-Neiges is located in the locality of Machaby, in Valle d'Aosta.

Località Mongnod, 2 - 11020, Torgnon (Aosta)
25.57 Kilometers from Bard
Vachéry Tower
The medieval tower in the locality Vachéry is located near the village of Etroubles, in Aosta Val...

Inside the narrow prisons of the Fort of Bard
The Bard Fortress suddenly appears before our eyes as we drive along the motorway towards Aosta. Majestic and impressive, placed on the summit of a panettone-shaped rocky cliff, the great Savoy wall surrendered only to Napoleon's troops. For the rest, an impregnable bulwark against the invaders was confirmed over the centuries, most of which were relegated without too many pleasantries to the dungeons of the fortress. Today the cramped prisons...
Continue
5 unmissable villages for their Christmas Markets 2018
5 villages to immerse yourself in the fairytale atmosphere of the Christmas Markets: soft lights, toys and gifts, decorations and gifts while the Christmas melodies are released in the air accompanied by the spicy scent of mulled wine Advent is the most evocative period of the year, one in which the villages seem like miniature nativity scenes and there is no age limit to get excited. There are many Italian fairytale villages dotted with wood...
Continue
Turin: trip to Valle d'Aosta to Bard and Etroubles
It is the unmistakable shape of the Serra Morenica that characterizes the part of Canavese lands that take us from the northern suburbs of Turin to Valle d'Aosta. An alternation of cultivated plains, hills, villages and castles accompanies us to the foot of the mountains. Settimo Vittone and Carema are the last Piedmontese centers we meet before arriving in the Alpine region. The village of Pont-Saint-Martin, which welcomes us in the vall...
Continue
Today we celebrate World Water Day
Today, March 22, we celebrate World Water Day, established in 1993 by the General Assembly of the United Nations. This year the theme is Water for all - Leaving no one behind ("Water for all, let's not leave anyone behind"), which is inspired by the sixth of the 17 goals for the sustainable development of the 2030 Agenda, or "to guarantee everyone the availability and sustainable management of water and sanitation by 2030». «Water is a precious commodity and it...
Continue