Share
Small town divided into numerous villages, including the best known Antagnod, Champoluc, Frachey, Saint-Jacques and Crest. Antagnod, seat of the municipality of Ayas, is a hamlet that enjoys a magnificent view of the Monte Rosa massif and the village is also a holiday resort suitable for winter sports.

A look at Ayas 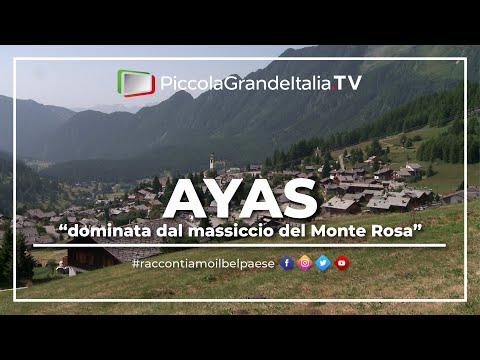 Ayas occupies the top of the homonymous valley at the foot of the big peaks belonging to the Pennine Alps, which mark the Swiss-Italian border in the Aosta Valley.

The toponym Latin is Agatius, which would seem to be the name of the first Roman colonist. It is thought that was Ayas initially populated by the Salassi. These were dedicated to agriculture, breeding, hunting and fishing until the conquest of the Romans (around 25 a.C.). The Ayas Valley became an important step toward the other territories of the Empire. Following this role was consolidated and relations with the Valais rose. From this moment Ayas began to be called Krämertal, Valle dei Mercanti. Toward the 515, the territory of Ayas became part of the feud controlled by the monks of San Maurizio, Burgunda origin, who resided in the Abbey Saint-Maurice d'Agaune (Valais). This population impose peasants to Ayas Christianity, which were hitherto strangers. It is in this period that were built the first churches and the roads which connected the villages were intensified. Then, the control of the Church on Ayas strengthened himself, until the Pope with the bull of 1776 does not gave to the Bishop of Aosta Aimone of Quart all control of the valley. To this date dates from the first evidence of Ayas. Simultaneously with the arrival of the Burgundians, a migratory flow of Walser peoples, of Germanic origin, took place in the valley, in particular Saint-Jacques, locally called Canton des Allemands ("Canton of Germans"). A second flow was in the XII century. This change left traces in the architecture, similar to that of the Valais and the high valley of Lys, and in the language as the patois of alta Val d'Ayas has a phonetic and a vocabulary very particular compared to other Valdostane patois. Toward 1200 the lands of the family of Graines, which controlled then Ayas, were sold to the family of Challant, Visconti di Aosta. So a good part of the val d'Ayas became a possession of the powerful family Challant. The valley took the name of Vallée de Challant-Ayas. However it was not only this powerful feudal family to check the valley but also the Abbey Saint-Maurice d'Augaune, which had high sovereignty on the lands. The Challant family ruled over Val d'Ayas until the XVIII century, when its belonging, now weak, it lost control. Following the valley became part of the Dukedom of Aosta and was organized by the Church, who owned the various parishes along the whole valley. As all the other municipalities of the Aosta Valley, also Ayas was struck by emigratori flows at the end of the nineteenth century and the beginning of the XX century. The main countries to which they went the Ayassins are France and Switzerland.

The Ayas Valley was, in the course of its history, very much influenced by the Church. For this there are more than twenty religious buildings, among churches, chapels and shrines, caves and tabernacles, all frescoed and linked to some particular artistic. Moreover the faithful of Ayas have done fresco some houses and then it is not uncommon for strolling we imbatta in frescoes with representations of the Madonna, of Jesus, of saints and the Holy Family. As regards instead the popular architecture, construction popular par excellence is the rascard (walser origin). The predominant materials are the stone and wood, the materials of which the territory is rich. These are joined in forms that are simple but stylish, which form the popular house of Ayas, that acted both as home from both stable and barn. It is characterized by the presence of two or more floors. The lower one is usually in stone, divided by the upper one in wood by the architectural element of the mushroom (which served to prevent rats to climb to the plane inhabited ). The roof with a skeleton composed of tree trunks, is covered by the lauzes, flat stones typical of the Walser landscape. In these constructions there are many artistic elements characteristic and variables, such as the wood finish, the doors round arched, grilles to windows. However there is a unique style, since the peasant fantasy has given for centuries buildings of all unique.

The art of the work of the wood of the sabotiers d'Ayas is renowned for the manufacture of the sabot (typical footwear in wood), called in local Patois tsôques. There are many popular legends that are told about the villages and on some places such as the chapel of Salus, that tells the birth of the homonymous chapel, or the hermitage of Résy.

Village of Ayas
Municipality of Ayas

Via Obre Biel Waeg, 7, Gressoney-Saint-Jean (Aosta)
12.11 Kilometers from Ayas
Fénis Castle
The Fénis castle is one of the most famous medieval castles of Aosta valley.

località Chez Sapin, 86, Fénis (Aosta)
17.95 Kilometers from Ayas
Alps Museum
The Alps Museum of Fort Bard in the Aosta Valley, is dedicated to the mountainous system of the A...

Via Obre Biel Waeg, 7, Gressoney-Saint-Jean (Aosta)
12.11 Kilometers from Ayas
Roman Gaul Road
Nearby the Fort of Bard are still visible the ruins of a stretch of the ancient Consular Road.

Recipe: Génépy, the strong and decisive liqueur and the Valdostan villages
It is a little-known liqueur with an apparently French name, the Génépy, typical of the Valle d'Aosta villages. In reality it is obtained by infusion of various herbs in which the artemisia weber prevails, followed by the artemisia glacialis. Both alpine herbs, to live must "stand up": minimum 2,000 meters, but do not even disdain the 3,000, where they grow on moraine soils that glaciers leave uncovered during their "withdrawn" cycles. Artemisia combine with alcohol or grappa to produce the liqueur of the region: 40 degrees ...
Continue