Share
Birthplace of Santa Maria Goretti, Corinaldo rises at the top of a hill, on the left bank of the Nevola river. Its walls are recognized as the most intact, imposing, fortified and long in the region and among the best preserved in all of central Italy. A major tourist attraction is the famous Pozzo della Polenta, located in the center of via La Piaggia. 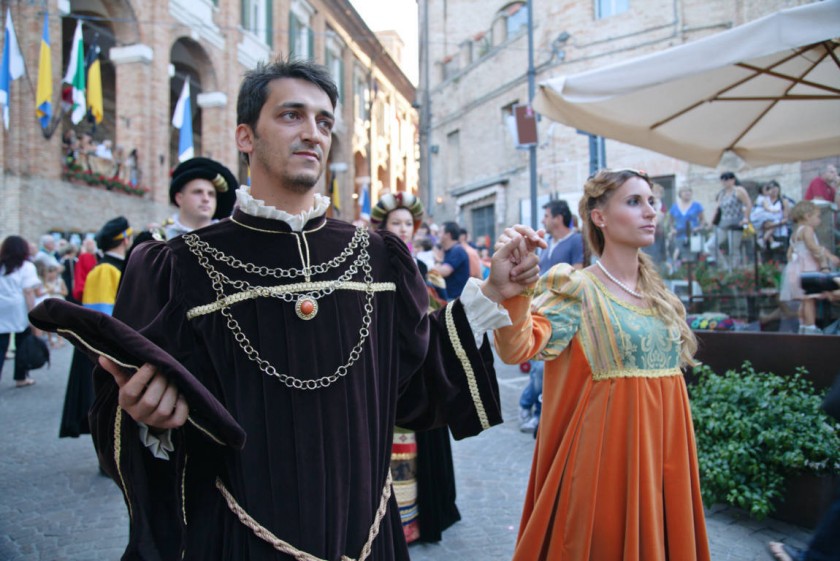 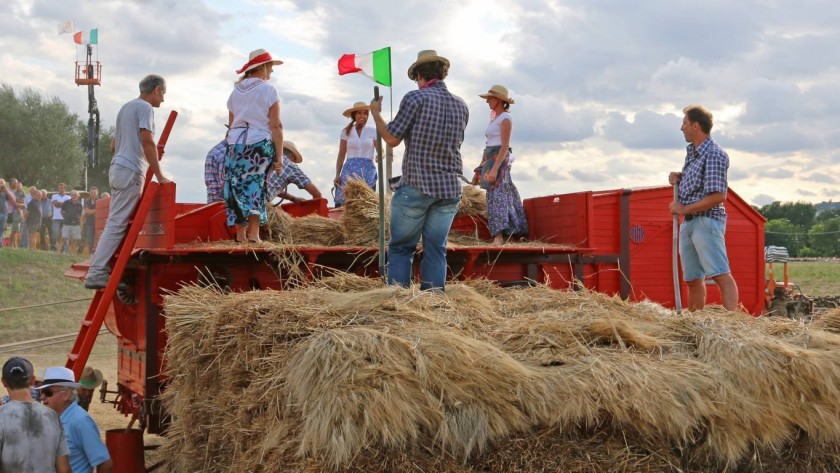 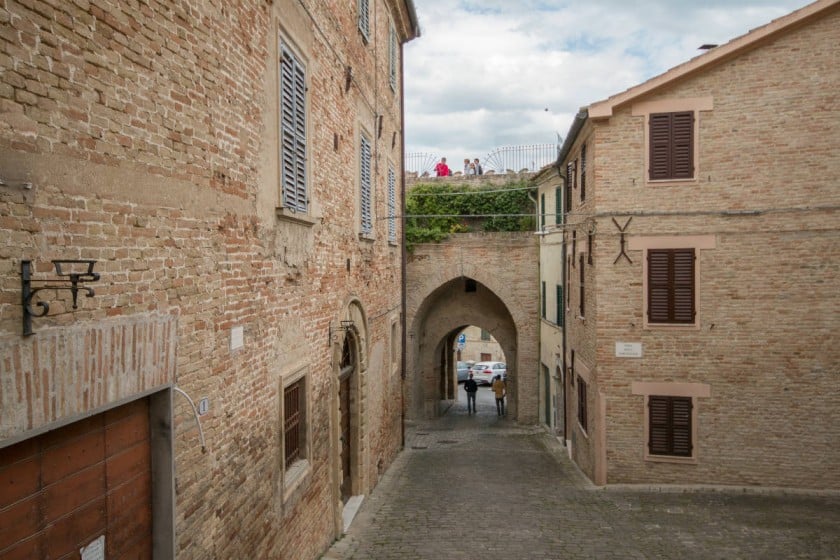 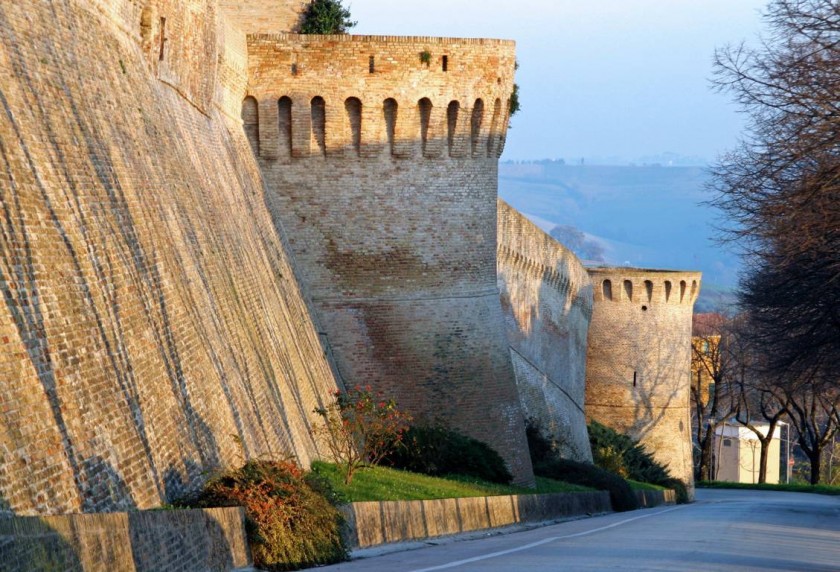 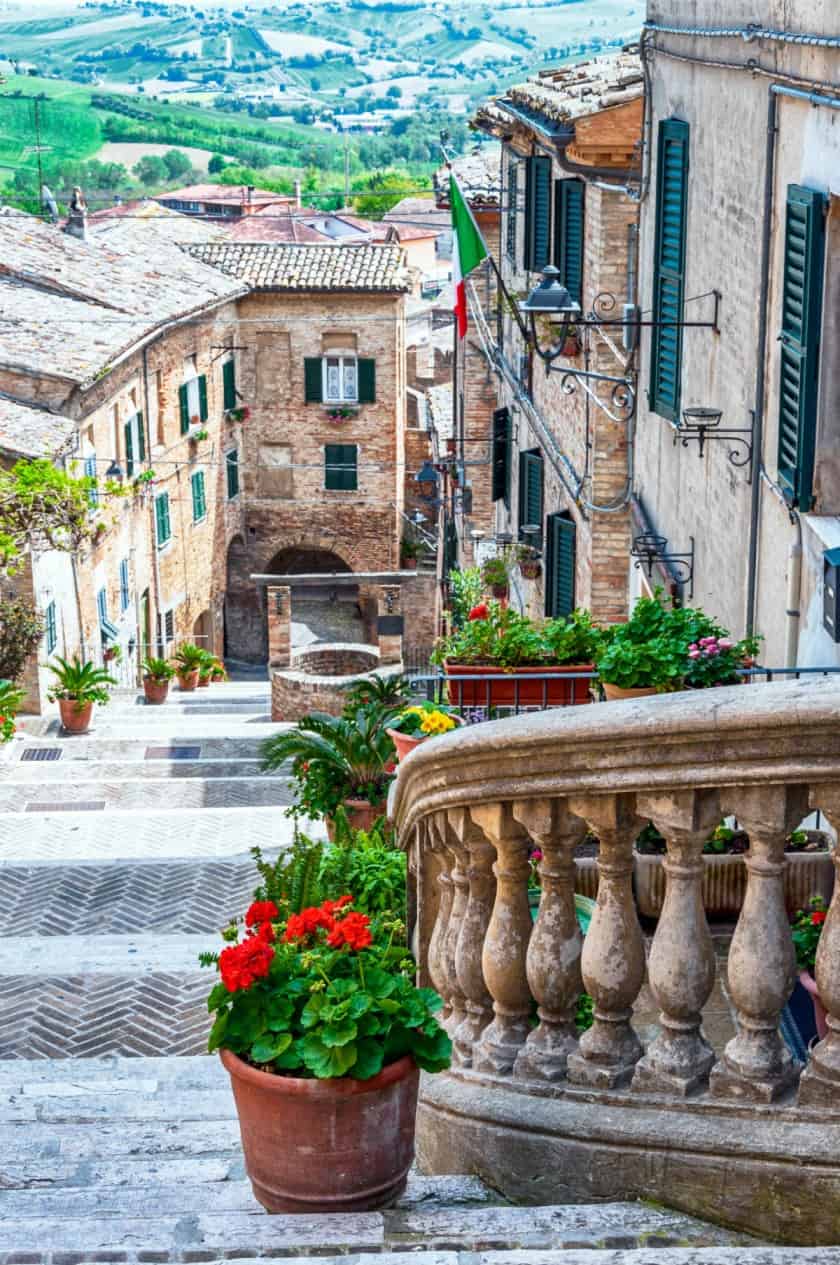 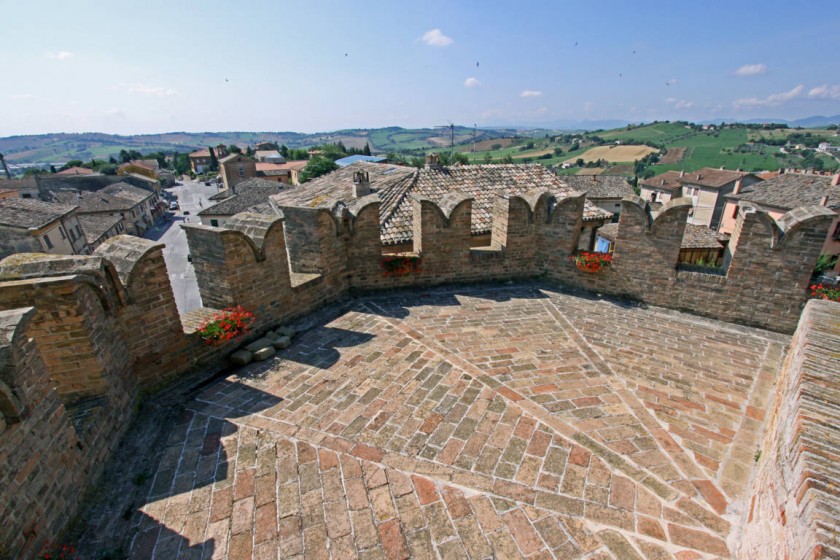 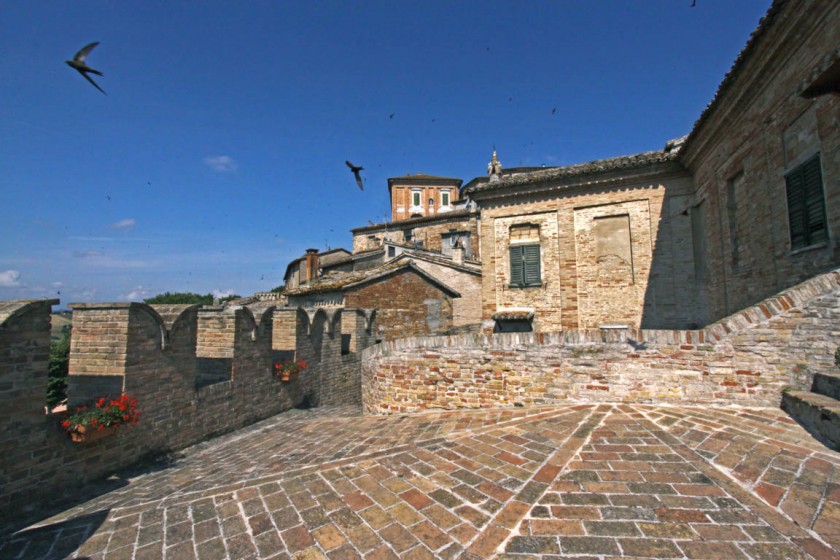 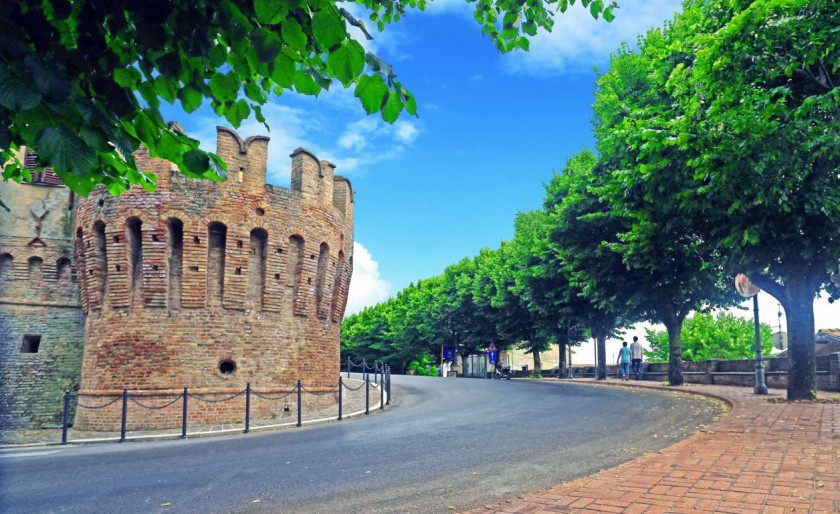 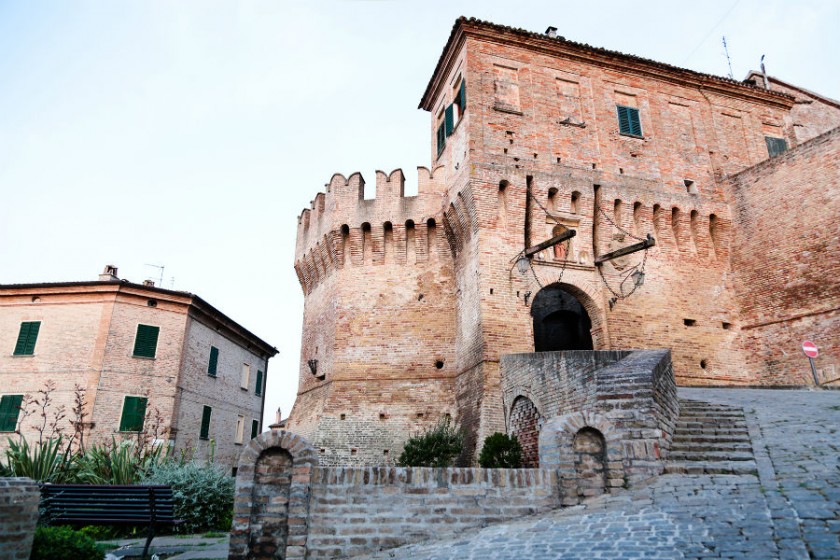 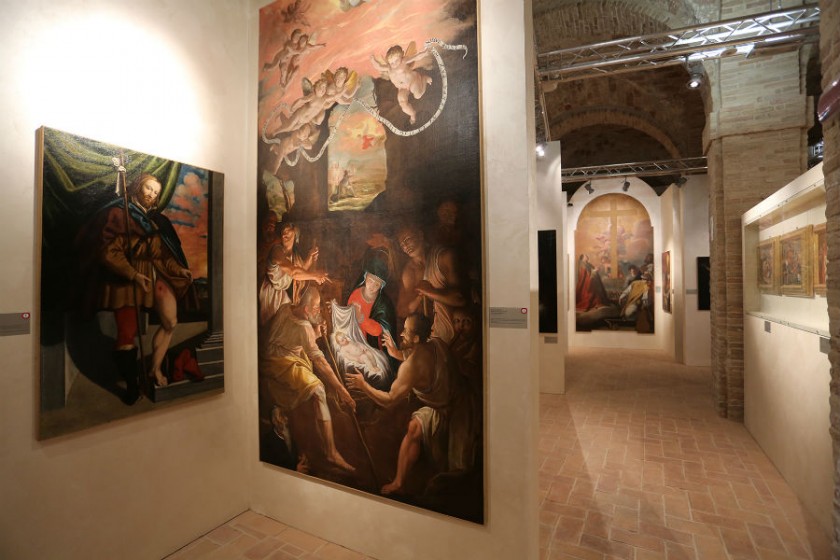 The name of Corinaldo (Curinald in Gallo-Piceno dialect) probably derives from "Curia di Rinaldo", ancient Langobard name that the first inhabited centre should have had during the Middle Ages. First of all a renowned wine-producing land (for its famous Verdicchio), it has well-maintained walls that date back to the XIV century. Its walls are recognized as the most intact, imposing, fortified and long (912 uninterrupted meters) of the Marche region and is one of the best preserved of all central Italy. Here Santa Maria Goretti was born.

It rises to the top of a hill on the left bank of the river Nevola. In all probability the city of Corinaldo is sort at the beginning of the second millennium, as a result of the widespread phenomenon of the fortification. Nestled between the rivers Cesano and Misa, between Marca di Ancona and the state of Urbino, it constitutes in a free municipality at the end of the XII century. For its strategic position, soon becomes a scope outpost contested from the neighboring municipalities. After the destruction of 1360, Corinaldo is reconstructed literally ex novo in 1367, following the authorisation granted by Pope Urban V, with the current boundary walls, itemizing fortificativi elements attributed to the genius of the famous military architect the Sienese artist Francesco Di Giorgio Martini. Additional Defense elements are added by the Malatesta family and by Francesco Sforza supplementing the walls with a powerful fortress, that formwork which now traces remain in the Church of the Suffragio.

But the page of history more glorious del Borgo is the one written in 1517, when Corinaldo resists etching of the ousted Duke of Urbino, Francesco Maria Della Rovere. After twenty days of siege the corinaldesi compel the duke to the retreat and the pope of the epoch, Leone X, for the faithfulness shown, elevates Corinaldo to the rank of town. The "Contesa del Pozzo della polenta" is the most ancient historical commemoration of the province of Ancona, recalls this important page in the history of Corinaldo. In the '600 Corinaldo it refines in architectural forms and in costume, enriched with the opera and of the ingeniousness of valuable artists.

See progressively light even monumental religious and civic buildings still visible today and perfectly preserved, which among others the Chiesa del Suffragio the characteristic octagonal plan, erected on the old tower, the church of Our Lady of Sorrows, the Sant'Anna (patron saint of Corinaldo) and the shrine is now dedicated to Santa Maria Goretti, who in this city was born on 16 October 1890.

Around the ancient walls
Corinaldo boasts a historical center very suggestive, whose monument more impressive are without doubt its mighty walls: about one kilometer of fortifications dating back to 1367 and extended to the end of 1400, equipped with doors with ramparts, ramparts, towers, guardiole and window slits, considered to be among the best preserved of the Marches. Starting from the Torre dello Sperone, high well 18 meters, pentagonal shape, it starts to follow the wall circuit turning toward the Gate of San Giovanni. Here there are many elements of defense still visible, as the housings of the beams of the drawbridge, the guns, the window slits and it is possible to climb above the door to admire the panorama.

Along the walls of the Scorticatore goes next to the eponymous tower: both take the name from the craftsman who worked here in 1800. Descend to the port of S. Mary of the market, a splendid example of defense with a double entrance rotated 90°, to then to climb up the tower of the Calcinaro and the Tower of the Roundabout. Here begins the Renaissance addition that amplified the portion of historical center comprised within the walls: through the covered walkway of the Landroni you reach Porta Nova, third and last entrance to the walled circuit.

from first to meat from passatelli roasted meats, passing for the polenta and the vincisgrassi. And when it comes to desserts, is a blaze of specialties, especially from September to Christmas, when with the must prepare bagels, toast, sciughi and biscuits stuffed called 'pecorelle'. Recipes based on simple ingredients but  with an excellent quality, as are the products of this territory: extra virgin olive oil and wine and in primis, the latter with well 3 DOC and 1 DOCG. On all, stands out the Verdicchio dei Castelli di Jesi, a fresh wine and rich in aromas, from white flowers to the fruit, with a characteristic note of almonds. Then there are companies dedicated to the production of excellences of all types: from the saffron to liqueurs, from honey with herbs and aromatic and medicinal herbs.

Strada Provinciale Flaminia, 41, Fossombrone (Pesaro e Urbino)
18.42 Kilometers from Corinaldo
Caves of Camerano
The Caves of Camerano are located below the historical center of Camerano, in Marche Region.

Via San Francesco, 25, Sirolo (Ancona)
48.47 Kilometers from Corinaldo
Frasassi Caves
The Frasassi Caves of Genga are located within the Regional Natural Park of the Gola della Rossa ...

Via Marcellini, 4, Serra San Quirico (Ancona)
22.51 Kilometers from Corinaldo
Tempio del Valadier
The Temple of Valadier is located in a mountain cave near the Grotte di Frasassi

Find where to sleep in Corinaldo

Via Caracciole snc, Fossombrone (Pesaro e Urbino)
16.92 Kilometers from Corinaldo
Cà le Cerque
A lovely villa nestled in the typical hilly landscape of the Marche region in the village of Foss...

Via Antonio Cecchi, 12, Fossombrone (Pesaro e Urbino)
17.21 Kilometers from Corinaldo
B&B Casa Sponge
B&B Casa sponge is a small corner of tranquility and art immersed in the hills around the Pergola...

Loc.tà Piano di Rocchetta, 12, Genga (Ancona)
21.51 Kilometers from Corinaldo
Cupramontana-Accoglie
A tourist information centre that aims to be at the disposal of visitors who want to spend happy ...

60034, Cupramontana (Ancona)
23.30 Kilometers from Corinaldo
Hotel Le Grotte
In the wonderful village of Genga, Hotel Le Grotte is a luxury 4 star hotel immersed in the beaut...

Loc.tà Piano di Rocchetta, 12, Genga (Ancona)
21.51 Kilometers from Corinaldo
Cupramontana-Accoglie
A tourist information centre that aims to be at the disposal of visitors who want to spend happy ...

Corinaldo: the country of madmen
Beautiful medieval village near Ancona, Corinaldo has a very original reputation. The village in the Marches, in fact, is known as the village of the madmen. However, behind the name are hidden myths and legends that are interwoven with much more prosaic realities, which over the years have been magnified and have contributed to increase the charm of this place nestled between the streams Misa and Cesano. Within this deepening we see what are ...
Continue
Fusion between architecture and nature: the most fascinating stone villages in Italy
Embedded in the most solid natural element, stone villages are among the most spectacular building agglomerates in the whole of the Bel Paese. Let's set off to discover some of the best, to mark for an upcoming vacation or trip out of town. From Piedmont to Liguria: Chianale and Apricale The beautiful village of Chianale, nestled in an area on the border between Piedmont and France, is located in the upper Varaita Valley and is surrounded by ...
Continue
In Senigallia, from the summer of 2018, the hotel of Bo Bear welcomes with a vegetable garden by the sea. On the hills, a triumph of villages
A vegetable garden by the sea, where you can grow fruit and vegetables in the company of Bo Bear, on the beach of Senigallia and in the province of Ancona. This is the original initiative of the Hotel of Bo Bear, the first family hotel in the Marche region, a bright sequence of attractions for a relaxing holiday. And the Bo Bear beach, with its large play area, boasts six hundred meters of enclosed space, secured by two gates, to prevent child...
Continue
The Easter seeds of the village of Corinaldo
Sowing and cultivation. Ancient gestures, related to our history, like religious tradition. These meet in the village of the Marche, Corinaldo, where, every year the faithful have the opportunity to cultivate the "Easter Seeds", ie seeds of wheat, vetch, chickpeas and field beans that are made available in small bags from the church of S Francesco after the Ash Wednesday function. This tradition, which is linked to the so-called "Sepolcri", consis...
Continue
The Festival of Fools is back in Corinaldo!
From April 23 to 25 returns to Corinaldo, after two years of forced stop, the Festival of Fools, the craziest spring event there is. Shows, exhibitions, markets, concerts, tourist packages and a series of cultural initiatives dedicated to all ages.An opportunity not to be missed to spend a weekend in one of the most beautiful villages in Italy and Orange Flag country of the Touring Club Italy.The event par excellence that lights up the beautiful medieval village of Corinaldo of a thousand colo...
Continue
Award ceremony: Monte Carlo Master of Olive Oil Contest 2021
On June 5, the Principality of Monaco hosted the most important companies producing oils at the gardens Princesse Antoinette, with an event-prizes of great international scope.The Monte Carlo Master of Olive Oil Contest 2021 has seen the participation of 170 oils from 3 continents who have competed for the various awards divided into categories and assigned by the jury of experts. An event to promote the excellence of the olive oil sectorThe competition, now in its fifth edition, has b...
Continue
Petralia Soprana: the village of the Borghi autumn 2018
After the victory of the village of Ganci in 2014, of Montalbano Elicona in 2015 and Sambuca di Sicilia in 2016, the land of the Gattopardo, with a plush step, once again, climbs the podium peaks with another gem of the hinterland, winning with Petralia Soprana the title of Borgo dei Borghi autumn 2018. This edition of the Il Borgo dei Borghi competition, an autumn spin-off linked to the Kilimanjaro television program, began with three groups per ...
Continue