Desserts typical of southern Italy, the filling of bocconotti varies depending on the location in which they are produced 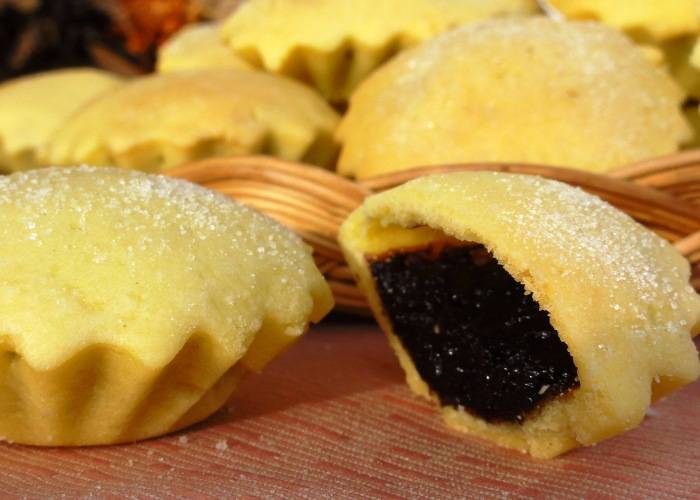 The bocconotti are typical sweets of the southern Italian regions whose filling varies according to the place of production.
According to popular tradition this cake was born in the late eighteenth century in Abruzzo, a period in which the importation of chocolate and coffee began.
The legend tells of a maid, in a small town in Abruzzo, who, to pay homage to her master, greedy for these two new products, invented a cake that recalled a cup of a coffee, thus creating the outside with the pastry and filling the interior with liquid coffee and chocolate. Noting from the first firings that the filling remained liquid, in subsequent preparations he then added also the yolks and almonds and covered the cake with a small lid of shortcrust pastry. It is said that it was the owner himself who named that sweet "bocconotto" because, given its small shape, it could be eaten in one gulp.

Let's find out how they are preparing in the Lucanian village of Maratea.

First we prepare the pastry. We sift the flour and place it, as a fountain, on the work surface by pouring the eggs, sugar, lard that has already been dissolved and a pinch of salt in the center.
We work the dough carefully and let it rest in the refrigerator, covering it with the film, for about 60 minutes.
Once the dough has rested, divide it into 2 parts and begin to roll out the first sheet. We make circles with molds and place them on them. Once filled with grape mustard or if you prefer with cherry jam, we use the other part of the mixture to line the special molds.
Cook them in a preheated oven at 180 ° C for about 15 minutes.
Serve them when they are very cold with a sprinkling of icing sugar.

What to see in Maratea

Church of Santa Maria Maggiore
Church of Our Lady of Sorrows
Hermitage of Our Lady of olive trees
More...
are you an Italian villages lover?
Join our Community
and share you experiences!