Recipe: Castagnaccio, the dessert of the Tuscan villages that smell of wood

It is the protagonist of autumn on the tables of the villages covered with chestnut trees, but its triumph is in Tuscany, where it is made of ancient knowledge, perfumes and ... magical powers 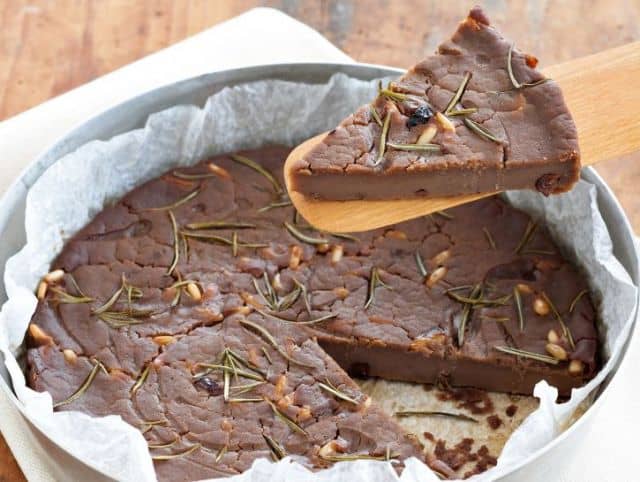 A taste that comes from the past, a "convict" taste that made people fall in love, a poor and ancient sweet of Tuscan cuisine that enriches the table in the fall. The castagnaccio is a characteristic autumn dessert of the villages in the Apennine areas of Tuscany, Liguria, Emilia and Piedmont and, depending on the region in which it is cooked, presents some differences. In Tuscany, for example, the cake is about a centimeter tall and according to the traditional recipe should be made with chestnut flour from the Mount Amiata. One of the peculiarities of castagnaccio is the presence of rosemary needles that give the sweet a particular flavor and that refer to a curiosity. In the past, in fact, it was said that the leaves of rosemary used in castagnaccio act as a filter of love: the boy who had eaten the cake offered to him by a girl, he would fall in love with her and he would marry her. Popular customs and sayings of the villages, which are handed down from generation to generation and come to the present day.

Put the raisins in lukewarm water for about ten minutes, then drain and dry with a cloth. In the meantime, sift the chestnut flour, pour it into a bowl together with a pinch of salt and start adding the water, little by little, until a smooth and rather soft mixture is obtained. Sift the chestnut flour and pour into a large bowl, add a pinch of salt then add the water until you get a very soft dough. Add a tablespoon of oil, mix again and leave to rest for a couple of hours. At this point grease a wide and thin pan, pour the mixture, add the raisins, pine nuts and rosemary. Bake in the oven - preheated to 180 degrees - for half an hour. The castagnaccio is ready, and it is excellent hot but it is also delicious cold, perhaps accompanied by whipped cream.

What to see in Santa Fiora

Church of Santa Chiara
Museum of mercury mines of Monte Amiata
Defizio
More...
are you an Italian villages lover?
Join our Community
and share you experiences!