Crispy golden spheres that contain olives stuffed with meat and scent. An icon of the Marche gastronomy, delicacies to be enjoyed at the table or while walking, in the name of tradition applied to street food 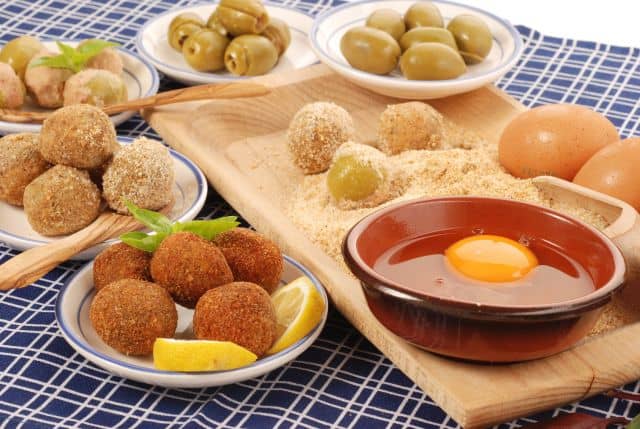 Before becoming a symbol of carefree family life, the Ascolan olive is above all a DOP banner, specifically from the province of Ascoli Piceno. And the history of the Ascolan olives is very ancient, dating back to ancient Rome, when the olives - for their nutritional properties - constituted the daily meal of the Roman legionaries and were the object of the attention of authors - and estimators - who wrote about it. Among these stand out Cato, Varrone, Marziale and Petronio which, in the "Satyricon", places them on the famous tables of "Trimalcione". Centuries pass and one arrives at Garibaldi which, according to the legend - even with some historical contexts - after having appreciated them on January 25th 1849 in Ascoli, decided to grow some olive trees in Caprera, to reproduce the recipe for Ascolan olives . Since then, they have made it on the road: today they are popular and known by connoisseurs in Italy and around the world who like to prepare them according to the original recipe. They can in fact be served as an appetizer, main course or side dish and are ideal for a tantalizing aperitif.

For the filling of the olives

The first action to be taken is to immerse the Ascolan olives in water for about twelve hours, to remove the salty taste of the brine. After this time, the olives are rattled with a small knife, making a cut of the spiral pulp. In the cavity left from the core the meat filling will be placed which according to the original recipe has very precise percentages: 60% of beef, 30% of pork and 10% of chicken. Brown the meat together with carrot, celery and onion and then add salt, lemon and white wine, then cook for about twenty minutes. Remove from the heat, pass everything to the meat grinder taking care to flavor with nutmeg, then add the eggs and Parmesan, obtaining a soft dough. At this point you start to fill the olives with this dough, recomposing them in their shape. Once the olives are stuffed, take them one by one and pass them in the flour and egg - previously beaten - and in the breadcrumbs, then fry them in plenty of extra virgin olive oil over medium heat. During cooking, turn and move the Ascolan olives until they reach their classic golden color. After browning, remove the excess oil on paper towels and serve them as you like: they are excellent hot and cold!