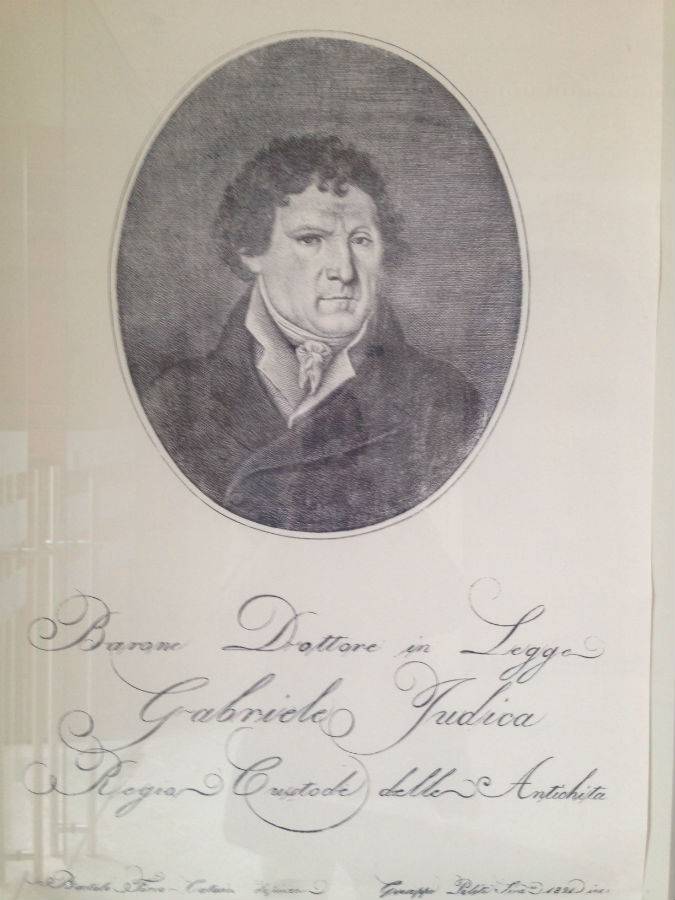 Gabriele Judica, passionate of the ancient history of its territory, has linked its name to the discovery of Akrai. The first research that he accomplished are those relating to the necropolis of Colle Orbo and Santoni in 1809; of Pinita in 1810 and 1813; the Latomie of the cut and the Intagliatella from 1810 to 1815; Temples Ferali in 1817 and, finally, those that between 1820 and 1824 have allowed to put in light, first, the bouleuterion and, then, the theater. The results are that he published in the opera "The Antiquities of Acre". From true spirit illuminated, in the cultural sphere of antiquarian research in the second half of '700, through the investigations to be carried out at its own expense, succeeds in putting together an important collection of materials that he keeps in his palace, which was set up as a veritable museum, soon became the object of interest on the part of the contemporary travellers. Gabriele Judica overlaid different political positions at the local level and was also appointed Royal Guardian of Antiquities of known.

The collection
from the archaeological research of Gabriel and from the interest for the antiques of Gaetano Judica (direct heir of Gabriele), is the origin of the collection exhibited in the museum. It, very heterogeneous, comprises finds ranging from prehistory to the age from the late Roman age. Most of the materials coming from the excavations carried out by Gabriele Judica to Akrai, others were added, such as those of the Collection Ferla or acquired such as those coming from the territory of the ancient Leontinoi. Part of the objects is certainly attributable to funerary contexts, as suspect by the type and state of conservation (they are findings intact). The collection is made up of ceramic productions, among which are relevant ones of the archaic period, with vases imported from Corinth, Sparta, from Etruria, from Ionia and from Athens. The collection Attica continues to be imported and present in the collection, both production siceliota that black paint. Conspicuous and variously represented is the ceramic of the Roman era, especially documented from lucerne. The collection also includes bronze objects, coins and jewelry and a series of bas-reliefs and inscriptions.

Exhibition
The exhibition is articulated on two floors. The lower floor hosts, in room A, the finds prehistoric and protohistoric. in the lobby, at the bottom, there is located a stone into the calcareous stone with inscription in the Greek language of the IV-III century B.C. In the upper floor, the exposure of the material follows a criterion chronological essentially aimed at documenting the long historical stratification of the area: from collection corinzia (room 1) to the late Roman period (room 8), passing through the archaic age (salt 2-3), the Classical Age and post-classical salt (4-5), the Hellenistic Age (room 6), the Roman age (room 7).