What to see in Montepulciano, Siena, Tuscany 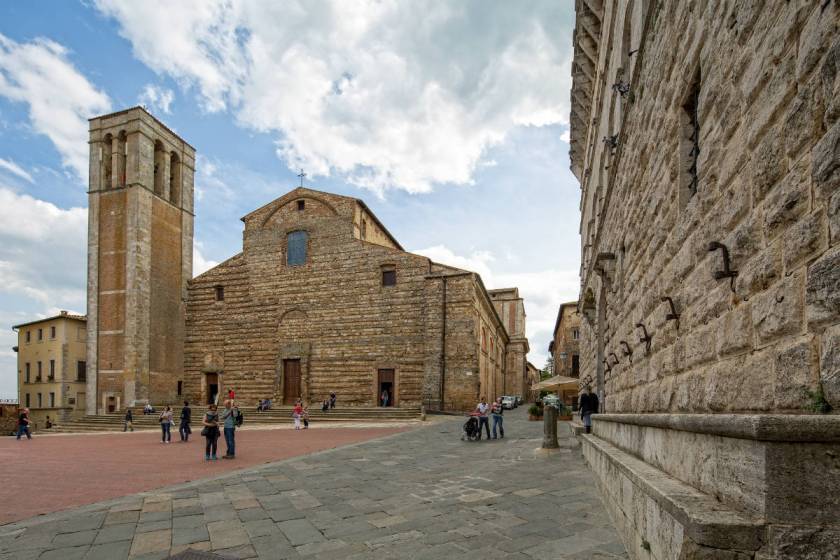 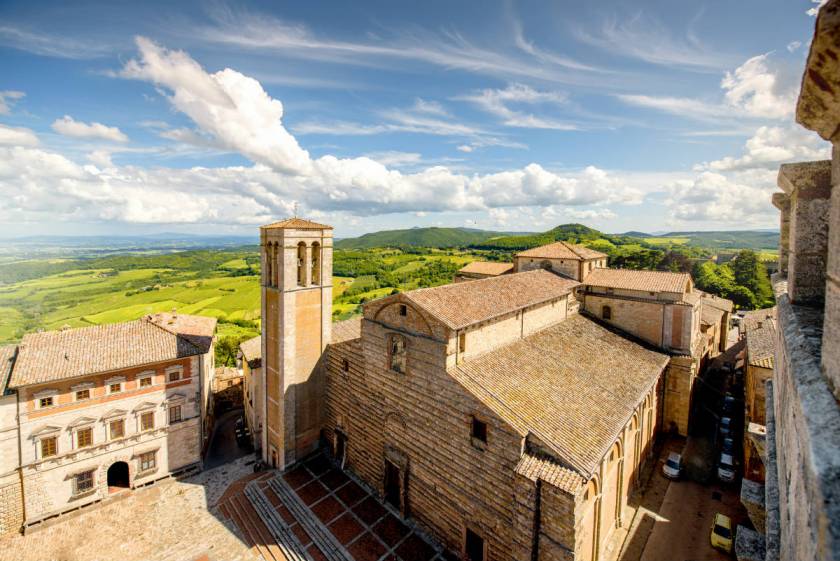 the cathedral of Santa Maria Assunta di Montepulciano was built between 1586 and 1680 in place of the ancient parish church of Santa Maria, whose rights plebani, acquired around the year 1000, originated from an ancient church placed outside the castle walls, where today is the church of San Biagio. The only surviving structure of the ancient Pieve is the massive bell tower in ashlars of travertine and brick. The apical portion, denoted by slender double lancet windows campanarie, was never completed. Incomplete is also the facade, a salient, whilst the sides, terminated by a coating of bricks and ashlars of travertine, are moved by Tuscan pilasters between which are inserted round arches.

Inside the warp architectural heritage, clear florentine ancestry, is austere and elegant for the sharpness of the surfaces to plaster that alternate with wall hangings in hewn stone. The plan is a latin cross divided into three naves by mighty pillars supporting round arches. In the central nave, in the transepts and in the apsidal scarsella, detected trabeations argue a barrel vault; at the intersection of two orthogonal bodies the angular plumes argue the drum (architecture) on which you set the dome. The side naves are covered by cross vaults; on the walls, in correspondence of each span, open chapels turn cask. A pillar of the right is leaned the pulpit is supported by ionic columns.

The vast spaces of the temple are adorned by a large number of art works. Some come from the ancient parish church and other churches poliziane. Among these one of the most important is the monumental triptych of the Assunta, painted by Taddeo di Bartolo in 1401, towering over the high altar. Another monument of primary importance is the fifteenth-century sepulchral monument of Bartolomeo Aragazzi, in Carrara marble, realized by Michelozzo between 1427 and 1436. Today the monument is divided into nine fragments of which seven are immured in different places in the Church: two statues and the frieze with putti and garlands are located on the main altar (dating back to the beginning of the XX century), the statue of the deceased is located in counter to the right, while two bas-reliefs depicting the Madonna who blesses the Aragazzi family and the farewell of the mother of the deceased members of his family are walled on the first columns of the Nave; two angels are preserved in the Victoria and Albert Museum in London.

We should also mention the small painting fifteenth-century on the table called the Madonna del Pilastro, realized by Sano di Pietro; the wooden statues policromate of the angel of the Annunciation and of the Vergine Annunziata, the work of Francesco di Valdambrino; the sixteenth-century table with the Redeemer of Bartolomeo Neroni called Riccio; the canvas effigiante San Sebastiano, work of the Florentine seventeenth century; in the chapel of the Blessed Sacrament, the canvas was painted in 1830 by Luigi Ademollo. At the center of the first chapel on the left hand side, which constitutes the baptistery, is located the fourteenth-century baptismal font attributed to Giovanni di Agostino or Tino di Camaino. On the wall behind the so-called altar of lilies, terracotta polychrome glazed work of Andrea Della Robbia; the manufactured article dates back to 1512 approximately and is placed between two statues of unknown author depicting Saint Peter (left) and San Giovanni Battista (right). The composition by Della Robbia develops on two levels: the lower one presents figures erected four saints who, from left, are Santo Stefano, San Bonaventura, Santa Caterina da Siena and San Benedetto da Norcia; the upper one, instead, corresponds to the lunette with the Annunciation.

Via Berignano, 76 - 53037, San Gimignano (Siena)
72.78 Kilometers from Cathedral of Santa Maria Assunta
Fonteverde Tuscan Resort & Spa
It is a place of infinite grace.

Loc. Terme 1, San Casciano dei Bagni (Siena)
26.81 Kilometers from Cathedral of Santa Maria Assunta
Azienda Agrituristica Pomponi
In a genuine Tuscany, an authentic farm greets you with the sincere warmth of a family.

Viale Gramsci 9, San Casciano dei Bagni (Siena)
25.83 Kilometers from Cathedral of Santa Maria Assunta
Cantine Ravazzi
The Ravazzi Cellars have conquered the area between Umbria and Tuscany as a synonym of genuineness.

Via delle Cantine, 2 - Loc. Palazzone, San Casciano dei Bagni (Siena)
25.74 Kilometers from Cathedral of Santa Maria Assunta
Giacomo Mori
Since the end of the 19th century, the wine, born in the cellars of Palazzone, has travelled the ...