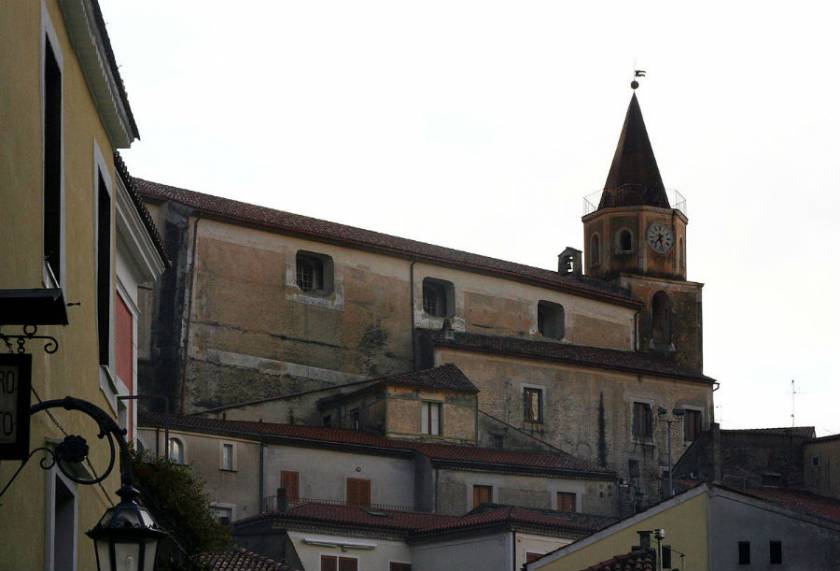 a commemorative plaque placed inside reminds us that the church was built in 1505 for work of this Greek Mercury. The primitive church was elevated to parish in 1434. The Romanesque church does not present a true and proper facade, but exposes a side on a triangular square. This side has a Baroque portal, in stucco and, further afield, two angels praying in marble, dating back to the XVI century. The great Romanesque bell tower is supported by a square base, in romanesque style, on which stands the octagonal structure that ends with a cuspidate dome.

In the presbytery, in addition to the nice cantoria choir, hand carved wood finished by Marco De Sanctis in 1729; you will find various furnishings in white marble, dating to the sixteenth century, that accompany a statue of the Assumption of the Virgin, called Madonna degli Angeli, since the Virgin appears surrounded by several angels.

B&B Il Sasso
A very convenient structure for any destination, without having to use the car, a stone's throw f...

Via San Nicola, 9, Sasso di Castalda (Potenza)
4772.87 Kilometers from
Il Borgo Ospitale Albergo Diffuso
It represents a real jewel immersed in a place of unparalleled beauty and is located directly in ...

Via Mordini, 1 - 85048, Rotonda (Potenza)
4730.90 Kilometers from
Casa del Mago
Located in the center of the medieval village of Castelmezzano, the Casa del Mago is an ancient a...

Via Libertà, 11, San Paolo Albanese (Potenza)
4749.35 Kilometers from
B&B Petra Castalda
A lovely B & B in the heart of the historic center of Sasso di Castalda, whose location allows yo...

Via Carrara, 26 - 85050 , Sasso di Castalda (Potenza)
4772.58 Kilometers from
Time Bridge Pub
A place with a warm atmosphere and a destination not to be missed during a stop in the village of...

Via Provinciale, 5, Sasso di Castalda (Potenza)
4772.83 Kilometers from
= distances as the crow flies
Farmhouse Fattoriabio
A company with a long tradition that has carried on its business in full respect of the surroundi...

Via Coronei, 1 - 85030, San Paolo Albanese (Potenza)
4749.28 Kilometers from
Bridge to the Moon
The Ponte alla Luna bridge in Sasso di Castalda is a spectacular Tibetan bridge with the longest ...