What to see in Varenna, Lecco, Lombardy, Lake Como 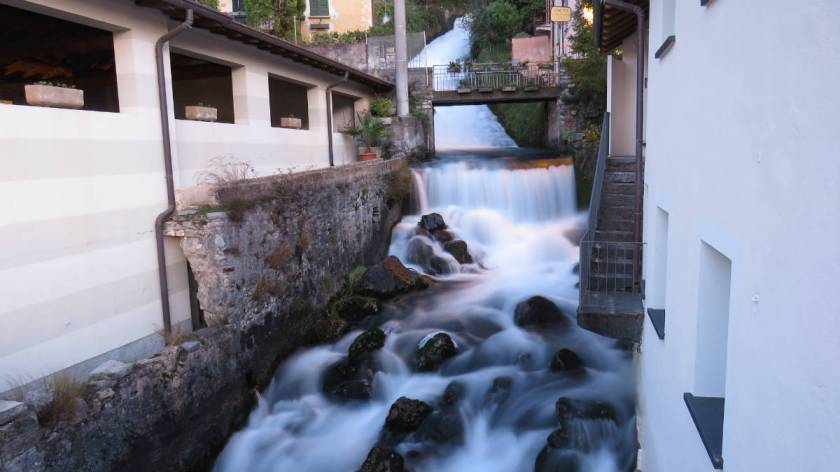 Fiumelatte is to be numbered among the shortest water-courses in Italy, developing only for 250 m. from its source to the dive into the lake. It hurls down the valley with an average gradient of 36° and for this reason its roaring waters are foamy, among the huge rocks scattered along its riverbed, giving it an incredible milk-white colour, a phenomenon from which it gets the name. It is an impermanent river as its waters are seasonal: they appear very quickly towards the end of March and then they disappear, as if by magic, about October. “Anomalous” periods of activity or of dryness are not rare and they must be traced back to the dry spells or to the rainfalls of the season. This unusual characteristic has led the experts to conjecture that the Fiumelatte may gush out from a natural karst source (some kinds of rocks, just how those of the Grigne, in time undergo a partial process of break-up due to the water and all the phenomena which derive are called “karst phenomena”). The experts think that Fiumelatte may be the “overflow” of a huge basin located in the bowels at the back of the glacial cirque of Moncodeno (northern Grigna). Along the centuries the river has excited the curiosity of many persons, among the others N. Stenone, D. Vandelli, L. Spallanzani, A. Stoppani, M. Cermenati and even Leonardo who mentions the “Fiumelaccio” in the paper 214 of The Atlantic Code. HOW TO REACH THE SOURCE Walking towards south from Piazza San Giorgio after about 200 meters there is Via Roma that goes up to the small square of the Cemetery. On the left of this small square there is a short flight of steps that gets steeper and steeper but at the end it starts a track parallel to the lake which runs along the side of the mountain and reaches the Fiumelatte after a total route about 1 km. long. The picturesque track is well shadowed, running in the thick wood. A diversion of a few minutes that can be found at about three quarters of its length (there is an arrow) leads on the left and up the mountain to the Baluardo, one of the most panoramic places of the lakeshore of Lecco.