What to see in Cervo, Imperia, Liguria 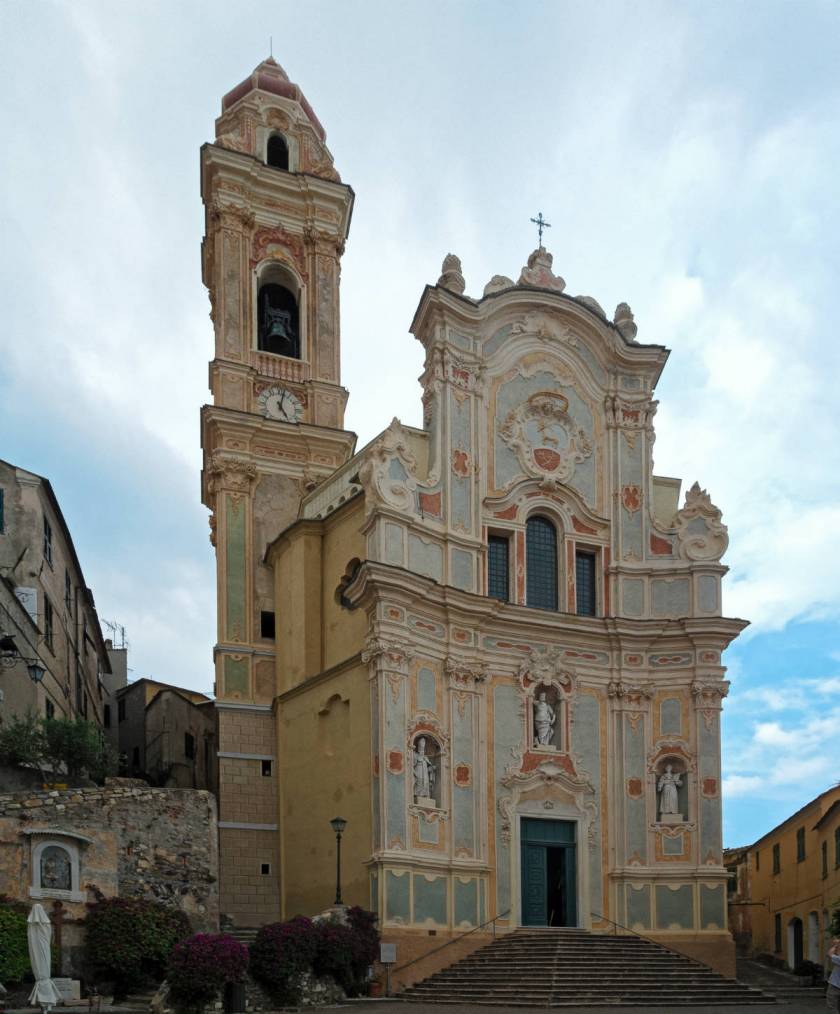 Also known with the local name of "Coral's", the church of San Giovanni Battista of Cervo was built between the XVII and the XVIII century also thanks to the proceeds of the coral fishing, and is considered one of the greatest monuments in the baroque style of the Riviera Ligure di Ponente.

The interior of the church has a single nave, is constituted by a good number of lateral altars and chapels. Between 1763 and 1767, of the Genoese sculptor Bernardo Gaggino, goes back to the construction of the altar of Sant'Antonio da Padova where is preserved the homonymous statue of saint of unknown sculptor but referable to the Genoese school of the XVIII century; the loanese marmoraro Carlo Antonio Rippa was the inventor of the next altar dedicated to the Madonna of the Rosary where it houses the statue of the Madonna with the Child, work Genoese sculptor rat that realized in the first half of the Seventeenth Century.

Adorns the parish a white marble pulpit dating back to the XVI century with carved panels depicting San Giorgio and San Giovanni Battista and, in the front part, a pity. The tabernacle of the holy oils and the baptismal font are datable to the first to the Fifteenth Century, the second dating back to the Seventeenth Century. The component is the work of 1735 of Father Augustine Torrelli, even if the current instrument, shape and gilding dates back to 1840. The frescoes on the vault of the apse were realized by the painter Francesco Carrega; the other paintings of the time were followed by Graffigna of Genoa after the earthquake of Diano Marina of 1887 that even a deer caused some damage to the parish and to the village.

Via alla Foce 29 - 18010, Cervo
B&B Tra i Carruggi
A comfortable environment will greet you to spend magical and unforgettable nights.

Via Cavour 5 - 18010 , Diano Marina
Hotel Giannina
An unforgettable holiday in Laigueglia, a fabulous tourist resort on the western side of the Ligu...

Via IV Novembre 5, Apricale (Imperia)
36.95 Kilometers from Church of San Giovanni Battista
Ristorante Locanda Bellavista
At the highest point of the village, from its terrace you can dominate the sea.

Via S. Nicola 9, Cervo
Martini Tobacco Shop 1937
This famous tobacco shop was established back in 1937. The passion for tobacco has been passed al...

Via Martiri 64, Apricale (Imperia)
36.85 Kilometers from Church of San Giovanni Battista
Le Palme bathing establishment
If you want to enjoy a relaxing and peaceful beach holiday, this is the place for you.