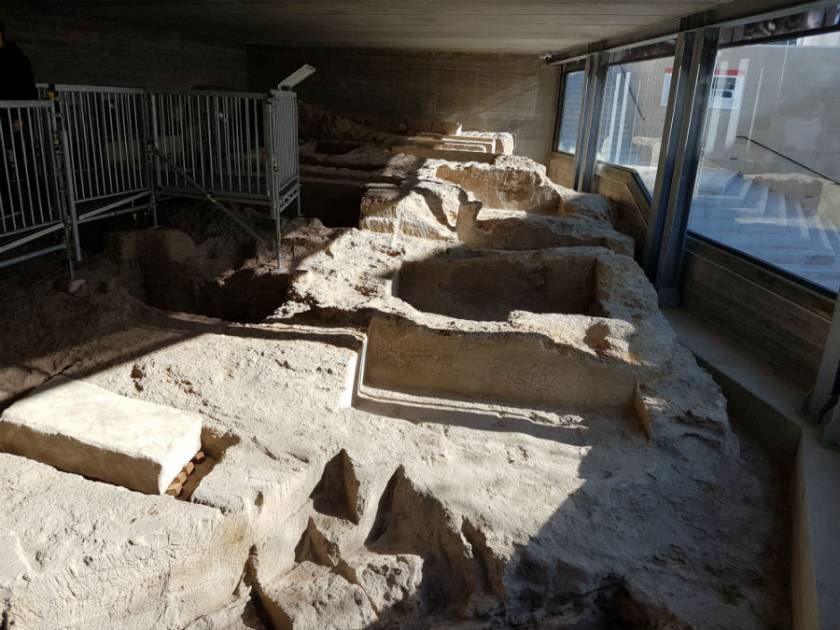 In September 2015, in the south-eastern sector of Piazza Lorch were found the remains of a Messapian necropolis, with the remains of at least 15 tombs disposed around a well, all entirely carved into the rock and covered with plaster. The tomb structures have returned several burials fit between the Hellenistic age and the late republican age romana (III-III century a.C.). According to the data of the excavation, the tombs were private of covers in blocks of limestone and plundered of burial objects more important already in the Roman Age (II century B.C.), when the area continues to be partially reused to funerary objects. Follows a occasional frequentation of this place among the imperial age and the late medieval age, tied to the extraction of blocks of limestone, disposal of animal carcasses and the burial of an adult individual ( X- XII sec. d.C.). In the course of the month of December 2015, archaeological investigations were extended along Via Torre S.S., allowing you to shed light on large tracts of rock, among which a silo (granary), to form sub rectangular, and a rectangular well dug in the rock, both due to the Hellenistic age ( IV- II sec a.C.). The area has been the subject of a project to develop with the objective of enhancing the charm and return to the local community and visitors to one of the most suggestive archaeological complex of the territory.

Via Ospedale Vecchio, 10, Oria
Il Casolare Degli Ulivi
A lovely guesthouse located in Oria, in the historical heart of the city in the countryside area....

Via Leone XIII, 21, Grottaglie (Taranto)
18.17 Kilometers from Archaeological Area of Piazza Lorch
La Nghioscia
La Nghioscia is a lovely vacation home with 3 rooms located in the heart of Grottaglie

Via D'Alessandro, 74023 , Grottaglie (Taranto)
18.36 Kilometers from Archaeological Area of Piazza Lorch
Re Sole Resort & SPA
Located halfway between Salento and the Gulf of Taranto, more precisely in Grottaglie, Re Sole Re...

Via Mannara, 57, Grottaglie (Taranto)
18.84 Kilometers from Archaeological Area of Piazza Lorch
Masseria Poesia
Situated in a commanding position with a 360-degree view of the Itria Valley, Masseria Poesia off...

Contrada Marinelli, 33 - 72014, Cisternino (Brindisi)
36.46 Kilometers from Archaeological Area of Piazza Lorch
Casa Flamì 2
A nice apartment, ideal for a vacation in Ostuni, consisting of a bedroom and a kitchen equipped ...

Via Pier delle Vigne, 5 - 72017, Ostuni (Brindisi)
26.41 Kilometers from Archaeological Area of Piazza Lorch
PiGreco Charming Trullo
The PiGreco Trullo is a charming bed & breakfast in the beautiful village of Ostuni