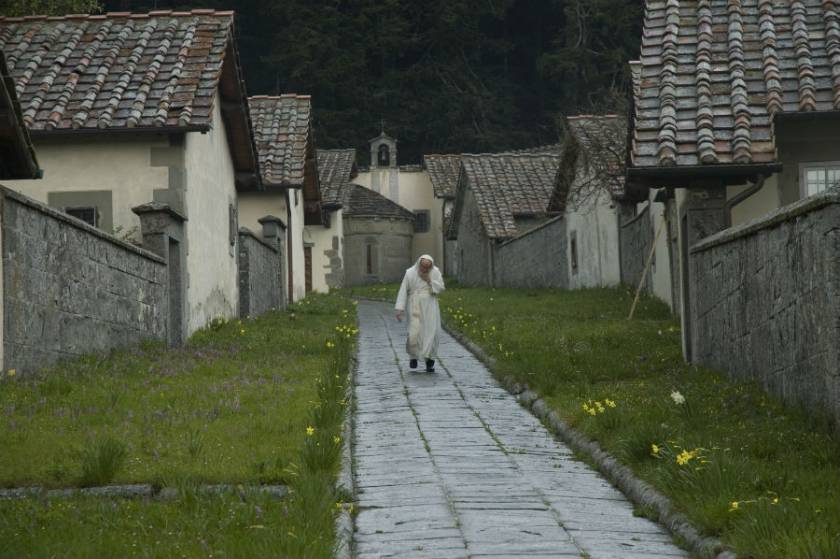 The Camaldoli Hermitage is near the village of Poppi, within the Casentino Forests, Mount Falterona and Campigna National Park, is very close to the border between Arezzo and Forlì-Cesena. It was founded by Saint Romuald in the first years of the XI century and is the Mother House of the Benedictine Congregation of Camaldolese. Toward the 1023 San Romualdo came between the Pratomagno and the Monte Falterona in the midst of the Casentinesi Forests and decided to found a hermitage in a clearing said field of Maldolo (Maldoli Campus).

Today the hermitage of Camaldoli is one of the two lungs with which breathes the monastic community; present therein: a short distance from one another in fact arise the monastery and the hermitage, whose monks belong to the same community live the same rule, but follow lifestyles in different part, giving more space to community life at the monastery and favoring the personal recollection at the hermitage. The monks who live at the Hermitage are currently nine. The hermitage, entirely surrounded by a wall of Sasso, overlooks the street with a door, through which you access the interior courtyard. From the courtyard you can visit:

A fence separates the courtyard area più internal reserved exclusively to the monks who live in small separate cells.

The Church of San Salvatore Travagliato is located in the center of the hermitage to symbolize the centralityà of prayer in the monastic life. It overlooks the central courtyard of the hermitage and è flanked by the Foresteria. On the left, with respect to the facade, stretches around the scenario of the Lavra, all the monastic cells that in the monasteries of Christianity in the East are called Lavre precisely. The church stands on the same place where it was located the primitive oratory founded by San Romualdo.

The Refectory was realized in 1679 by the masters Guglielmo Magistretti of Arezzo and Baldassarre from Stia, who rebuilt the room while keeping the previous refectory only the facade. Splendid is the lacunar ceiling dotted with rosettes all different from one another. It was made by the florentine carvers Diociaiuti Evangelist and Gaspare Bertacchi. The side walls are placed some paintings of remarkable interest, each of which represents two saints. Are attributed to the Camaldolese monk Venanzio The Hermit, of inspiration caravaggesca. On the bottom wall è place a crucifix in terracotta tiles made in 1935 by Adolfo Rollo.

The Library of the Hermitage of Camaldoli existing was GIà in the XI century, an era in which the Camaldolese monks were dedicated to the dissemination of the reform of the liturgical chant, made by their brother Guido d'Arezzo. The library was ordered in order to conduct the Munich to relive in himself the ascetic path indicated by San Romualdo. In 1510 the Library collected thousands of parchments. The first of the Napoleonic suppressions of 1810, inside the library were retained beyond 7000 printed books, 400 codes and over 700 incunabula. In that year and in the subsequent suppression of 1866, the library was stripped of his goods subsequently divided between the National Library of Florence, the Laurentian Library, the Biblioteca Civica di Arezzo and the Rilliana Library of Poppi. The archival material, including over 500 parchments, was transferred to the State Archive of Florence. Currently, the deposit of books is slowly rebuilding, comprising over 500 texts. The environment that collects the library was made in 1622. It's equipped with shelves machined soberly and ceiling è decorated with 27 canvases depicting the Apostles Peter and Paul, the Evangelists, St Benedict and St Romualdo, the Fathers of the Western church and Eastern Europe and the major thinkers of the Benedictine Order.

Around the hermitage develops the Biogenetic Reserve of Camaldoli, managed by the State Forestry Corps, but to whose care have done so for many centuries the Camaldolese monks, which deals in particular with fir white spruce. The Reserve stretches up to the Lama Forest, today in the territory of Romagna. Also very important the presence of fauna, among which we indicate four species of ungulates: deer, fallow deer, roe deer and wild boar, in addition to their natural predator, the wolf. Also abundant fauna ornitica (picchio greater, tits, tawny owl, the buzzard, etc.) and the smaller mammals (squirrel, dormice, etc.). There are also humid areas where there are established important species of amphibians such as the newt and the salamander.