Abruzzo presents itself as the ideal destination for lovers of all kinds of active and sustainable vacations, to be experienced year-round with sports, adventure and fun 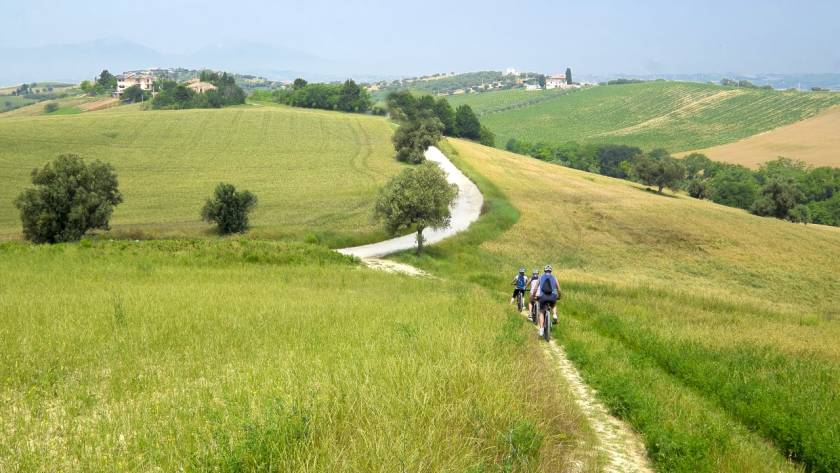 Characterized by unspoiled landscapes guarded within no less than three national parks, one regional park, one marine protected area, plus 38 other nature reserves, Abruzzo presents itself as the ideal destination for lovers of all kinds of active and sustainable vacations, to be enjoyed year-round in the name of sport, adventure and fun.
Thanks to the presence of hundreds of kilometers of bicycle paths, mountain bike trails and downhill circuits among hills and mountains, as well as numerous routes designed on roads with little traffic and a bike-friendly attitude also certified by a memorandum of understanding signed with Legambiente with which the Abruzzo Region aimed to promote a complex network of accommodation facilities and complementary services to encourage the development and qualification of the tourist offer declined on two wheels, cyclotourism is perhaps the most complete and penetrating way to really get to know and understand this ancient and modern land at the same time, which can be appreciated even more when observed at the slow pace of the bicycle. 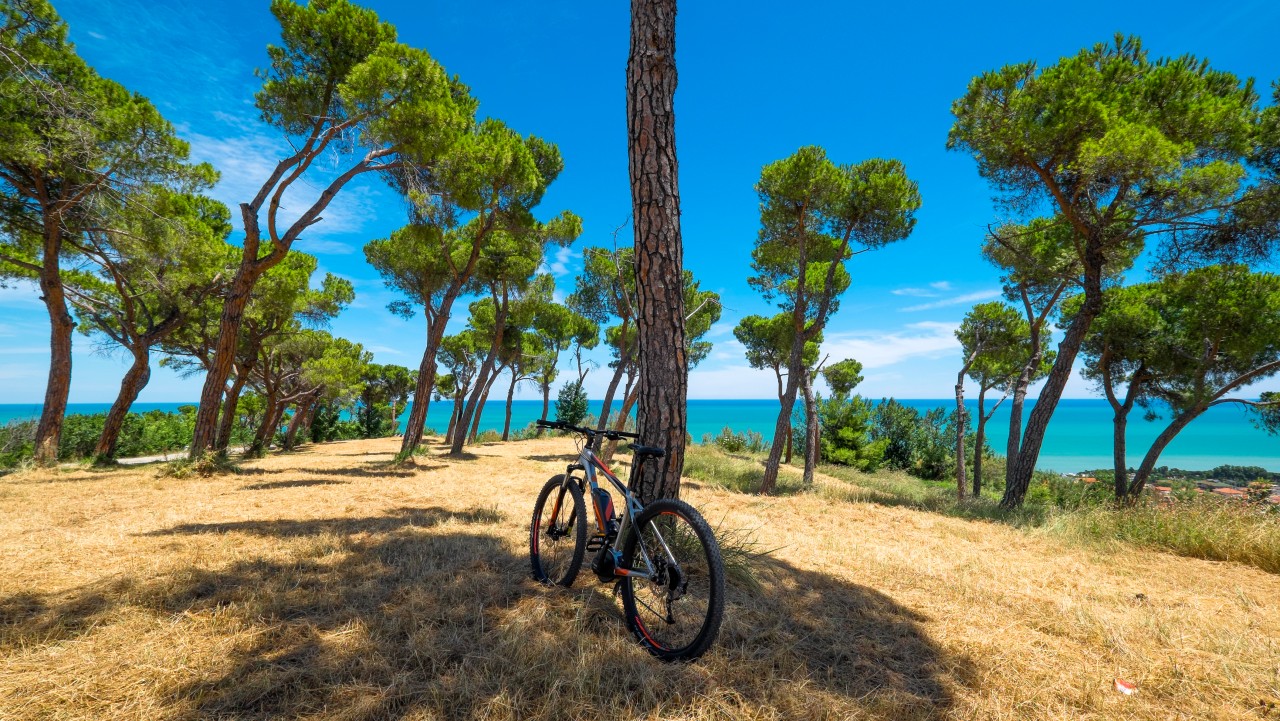 Beginning with its approximately 130 kilometers of coastline counterpointed by a single bicycle/pedestrian path (nearing completion in some sections) designed as part of the Bike to Coast project - itself an integral part of the national Ciclovia Adriatica - on which several inland-directed itineraries are grafted like teeth of a comb, from the Ciclovia del Tordino in Teramano to the Via dei Mulini in Chietino.
Continuing instead with the blue of the Adriatic at our side, among centuries-old pine forests and coastal biotopes we lap the mighty Cerrano Tower, one of the oldest watchtowers of the Kingdom of Naples, now home to the marine protected area of the same name. 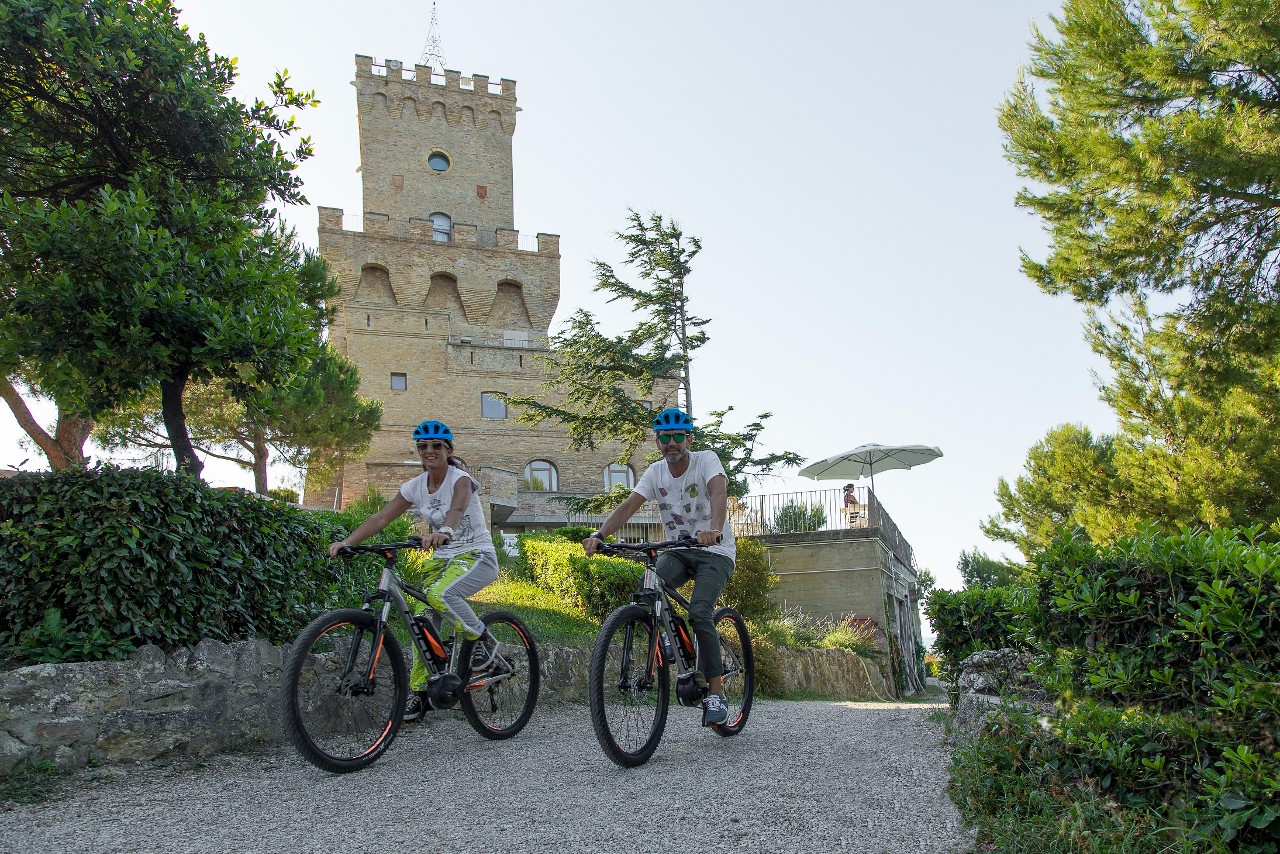 Having passed Pescara thanks to the futuristic Ponte del Mare (Bridge of the Sea), in the portion of the Chieti province between Ortona and Vasto, the ride reveals unseen cliffs and pebbly coves, ideal landing places for a regenerating stop to be experienced in absolute tranquility, especially outside the high season flows. We are on the Green Way of the Trabocchi Coast, so called because of the presence of ancient wooden machines once used for fishing, now almost all of which have been converted into restaurants where traditional seafood dishes can be enjoyed. 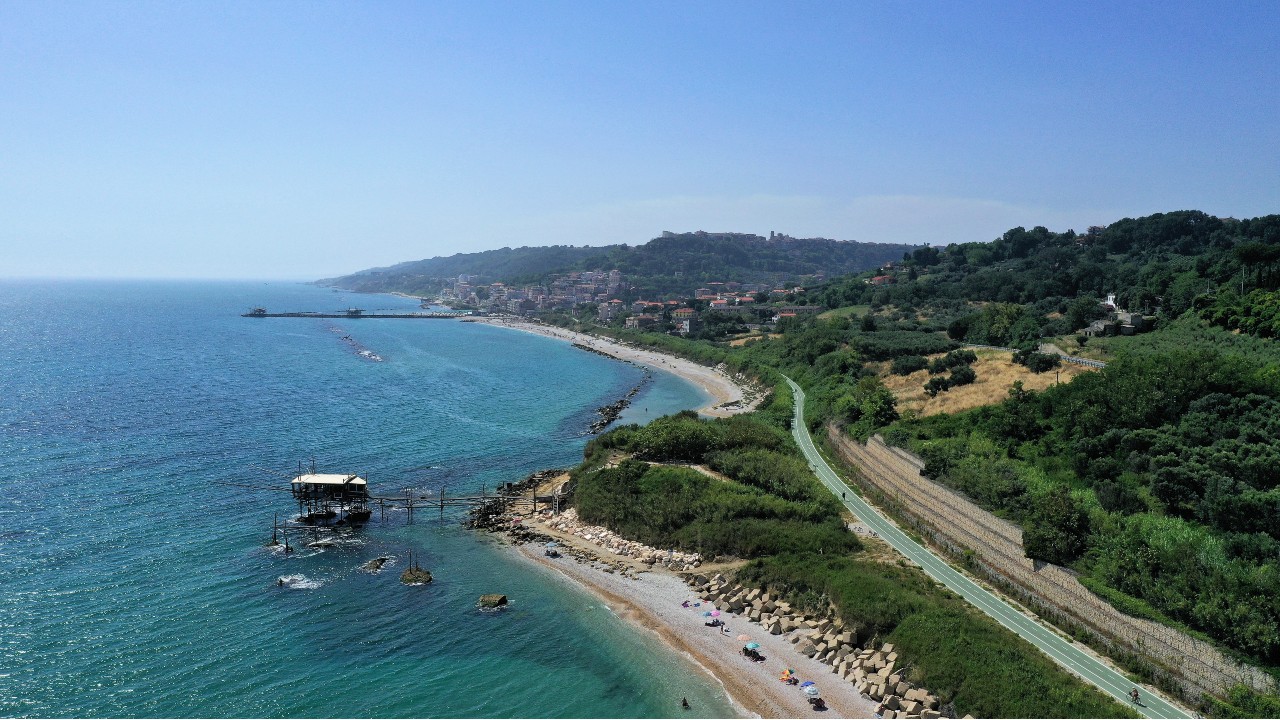 The route has been carved out on the former railroad track that runs parallel to the coastline, surrounded by scenery of incomparable beauty such as the majestic Aragonese Castle in Ortona, the solemn Abbey of San Giovanni in Venere in Fossacesia - an authentic masterpiece of medieval sacred architecture nestled among olive groves and vineyards - and the nature reserves of Lecceta in Torino di Sangro and Punta Aderci in Vasto. Precisely on the Green Way of the Trabocchi Coast, the second edition of Art Bike Run + Wine will take place from Sept. 30 to Oct. 2, three days of events dedicated to sports, culture and taste among running races, art exhibitions and food and wine bike rides. 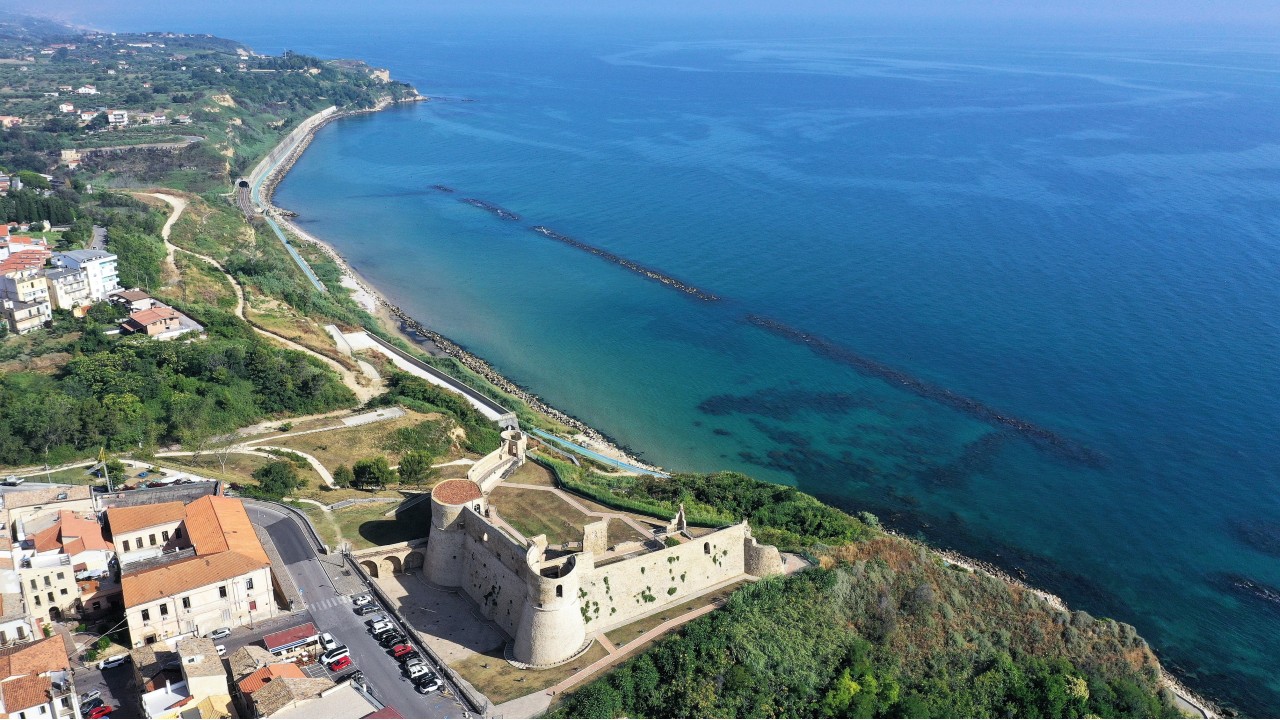 Around the scenic infrastructure has developed a true Trabocchi Bike Network consisting of ten itineraries of varying levels of difficulty for a total of more than 250 kilometers, identifiable thanks to appropriate signage and carved out on inter-pasture roads with limited traffic that allow connection with the main cultural, environmental and agri-food attractions of the hilly hinterland reaching, among others, important centers such as Tollo, wine city par excellence; Crecchio, with its imposing Ducal Castle; Lanciano, the historic capital of Frentano and site of a double Eucharistic miracle; and Scerni, where the tasty Ventricina del Vastese is produced.
Still turning our gaze in the direction of inland Abruzzo, equally compelling are the routes that reach the foothills of the highest peaks of the Apennines. Among the many, one can ride immersed in the vineyards of the Tritana Valley, between the provinces of Pescara and L'Aquila, skirting the clear waters of the Tirino River, one of the cleanest in Europe. As well as trying your hand at the gentle up and down among the velvety roundness of the Teramane Hills, gratifying yourself with a regenerating and fragrant glass of Montepulciano d'Abruzzo, which in this circumscribed sub-area of production was the first wine in the region to be awarded the prestigious DOCG recognition back in 2003. 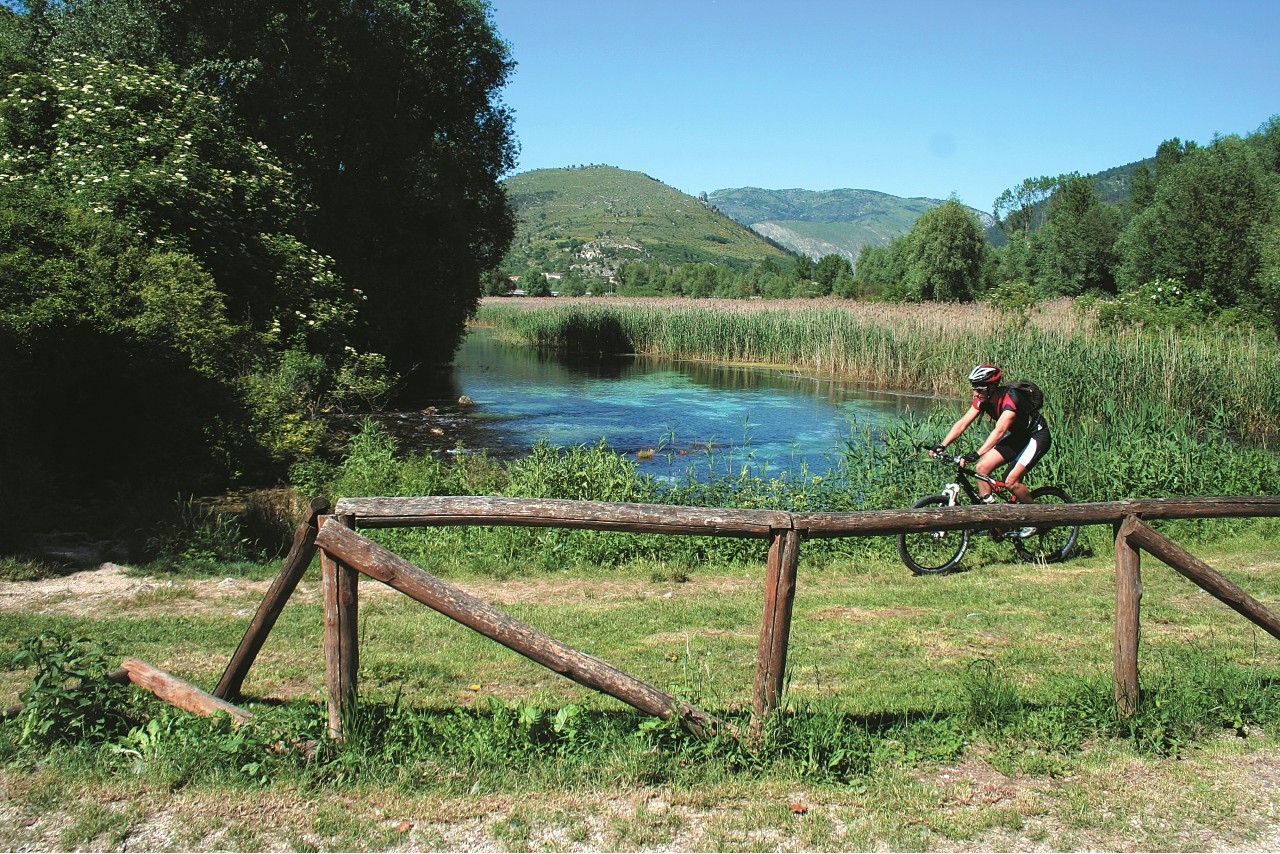 Identical wonder is offered by the set of cycling itineraries designed as part of the Cuore d'Abruzzo in bici project, which, starting from the Celestinian Abbey of Santo Spirito al Morrone in Sulmona, through 14 individual stages allows the discovery of villages and peculiarities of unique territories such as those of the Peligna, Subequana and Sagittario valleys, including the Alto Sangro district and the fairy-tale lake scenery of Scanno, with its romantic heart-shaped perimeter. Until finally pushing on to the scenic lakefront of Campotosto with its enchanting views of the imposing Gran Sasso d'Italia and Monti della Laga mountain ranges, without neglecting the possibility of reconnecting the threads of memory by pedaling on the historic Gustav Line guided by the Sangro River in the direction of Alfedena and Lake Barrea within the Abruzzo, Lazio and Molise National Park. For a cycle ride truly of endless emotions. 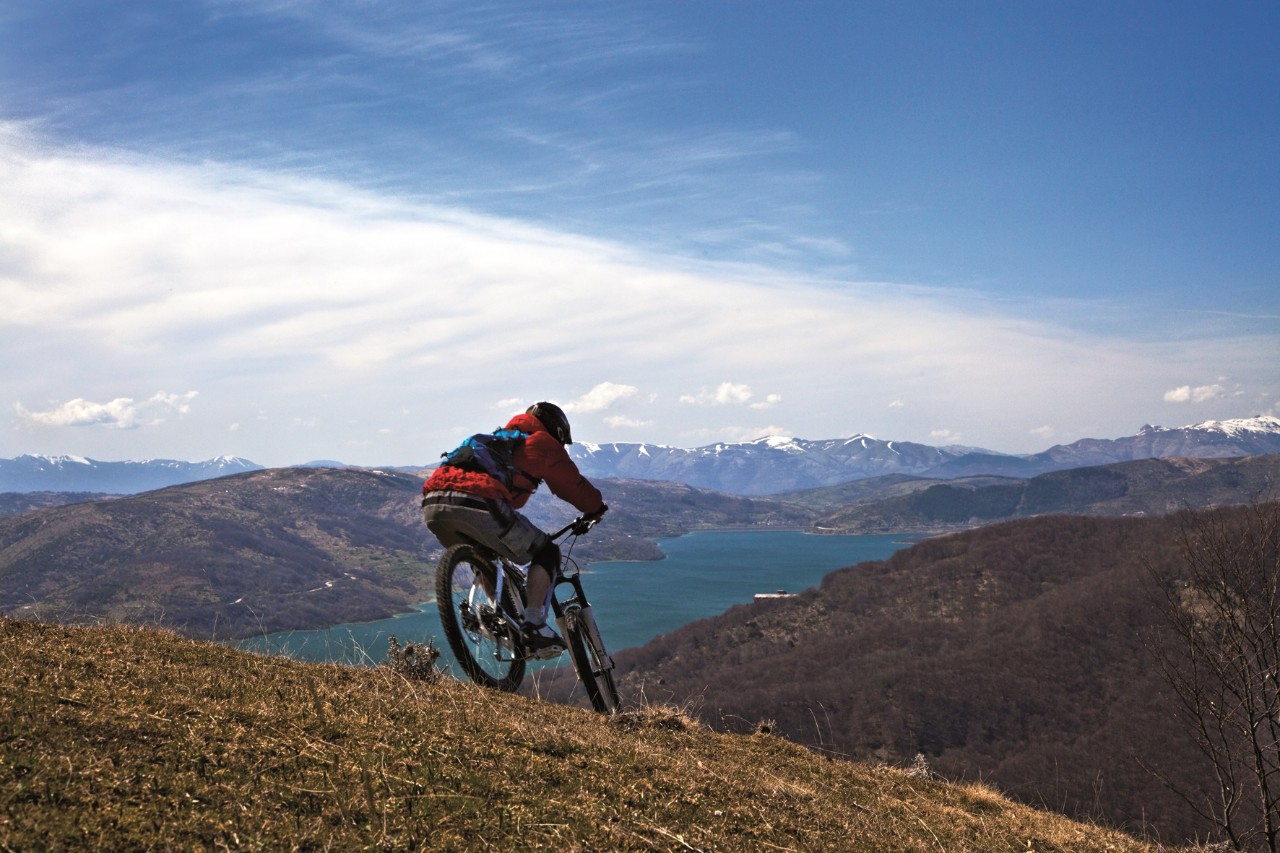 Not just the sea: an essential guide to the mos...
A plunge into the singular beauty of the Abruzz...
The charm of the Nuraghi: the symbol of the his...
More...