A plunge into the singular beauty of the Abruzzo Sea

The Abruzzo waterfront, more than 130 kilometers of sandy shoreline, is capable of giving the traveler a plural and unforgettable experience 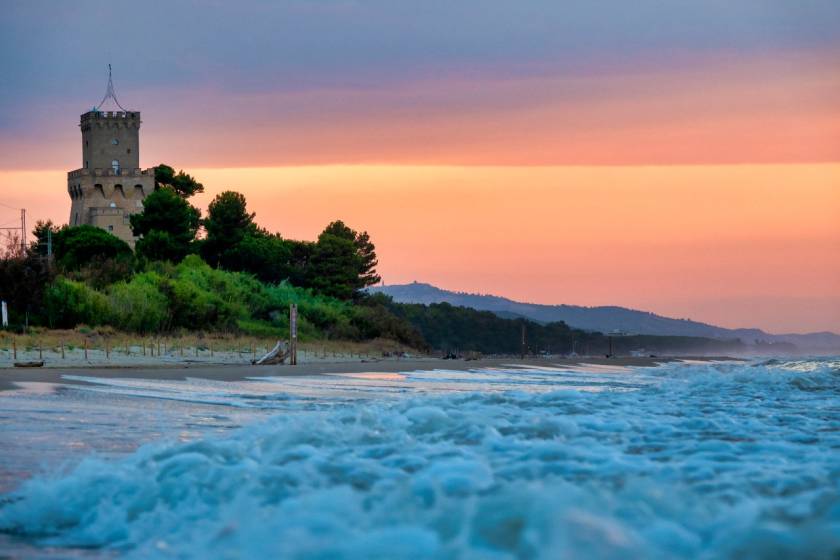 Tower of Cerrano © Only Fabrizio/shutterstock

Wide stretches of golden sand interspersed with cool pine forests and ancient watchtowers, pebbly coves, cliffs and romantic headlands overlooking the sea. Plus equipped lidos for lovers of amenities and services and free beaches to experience in contact with nature. Welcome to the Abruzzo waterfront, more than 130 kilometers of sandy shoreline capable of giving the traveler a plural and unforgettable experience.

A coast with a double face but united by a single, great wonder, to be discovered step by step or in the saddle of a bicycle pedaling propelled by the sea breeze on the Bike to Coast, the scenic bike/pedestrian path built along the entire coastline (nearing completion in some places), itself an integral part of the Adriatic Cycle Route that when fully operational will connect Trieste to Santa Maria di Leuca, in Puglia. 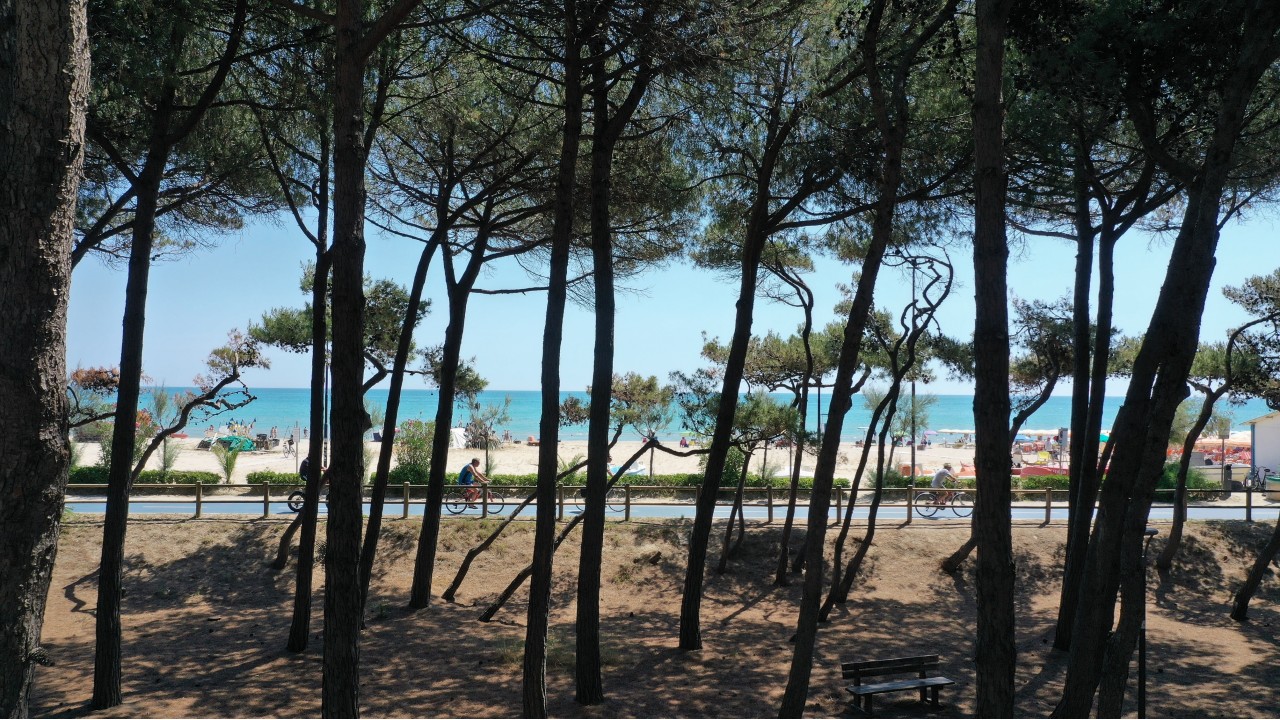 Excluding the very short stretch of free beach at the Marina di Città Sant'Angelo, there are 18 seaside resorts in Abruzzo, most of them awarded the Blue Flag every year for the quality of their waters and services offered - for 2022 as many as 12 municipalities were awarded it - and also with the Green Flag awarded by the pediatricians' association for child-friendly beaches, obtained this year by 10 coastal centers. Here, as elsewhere, it is possible to indulge in whole days of pure fun and active vacation between canoe trips, scuba diving, snorkeling, kite and windsurfing activities, sailing or stand up paddle (sup) experiences and much more.

In the Teramo province, the towns of Martinsicuro, Alba Adriatica, Tortoreto, Giulianova, Roseto degli Abruzzi, Pineto and Silvi are known as the seven pearls (or seven sisters) of the Abruzzo Garden Coast. The beaches are sandy and equipped with every convenience, although there is no shortage of stretches of free sandy shore and naturalistic features of rare beauty such as the Coastal Biotope in Martinsicuro and the Borsacchio Regional Reserve in the hamlet of Cologna Spiaggia in Roseto degli Abruzzi, where flora and avifauna can be observed while respecting environmental biodiversity. In the segment of coastline between Pineto and Silvi, surrounded by a thick scrub of domestic and Aleppo pines, stands the monumental Torre del Cerrano, one of the oldest watchtowers of the Kingdom of Naples, built in 1568 and currently home to the Marine Protected Area of the same name, whose stretch of sea was awarded the 4 Sails by the Guida Blu 2022 by Legambiente and Touring Club Italiano. 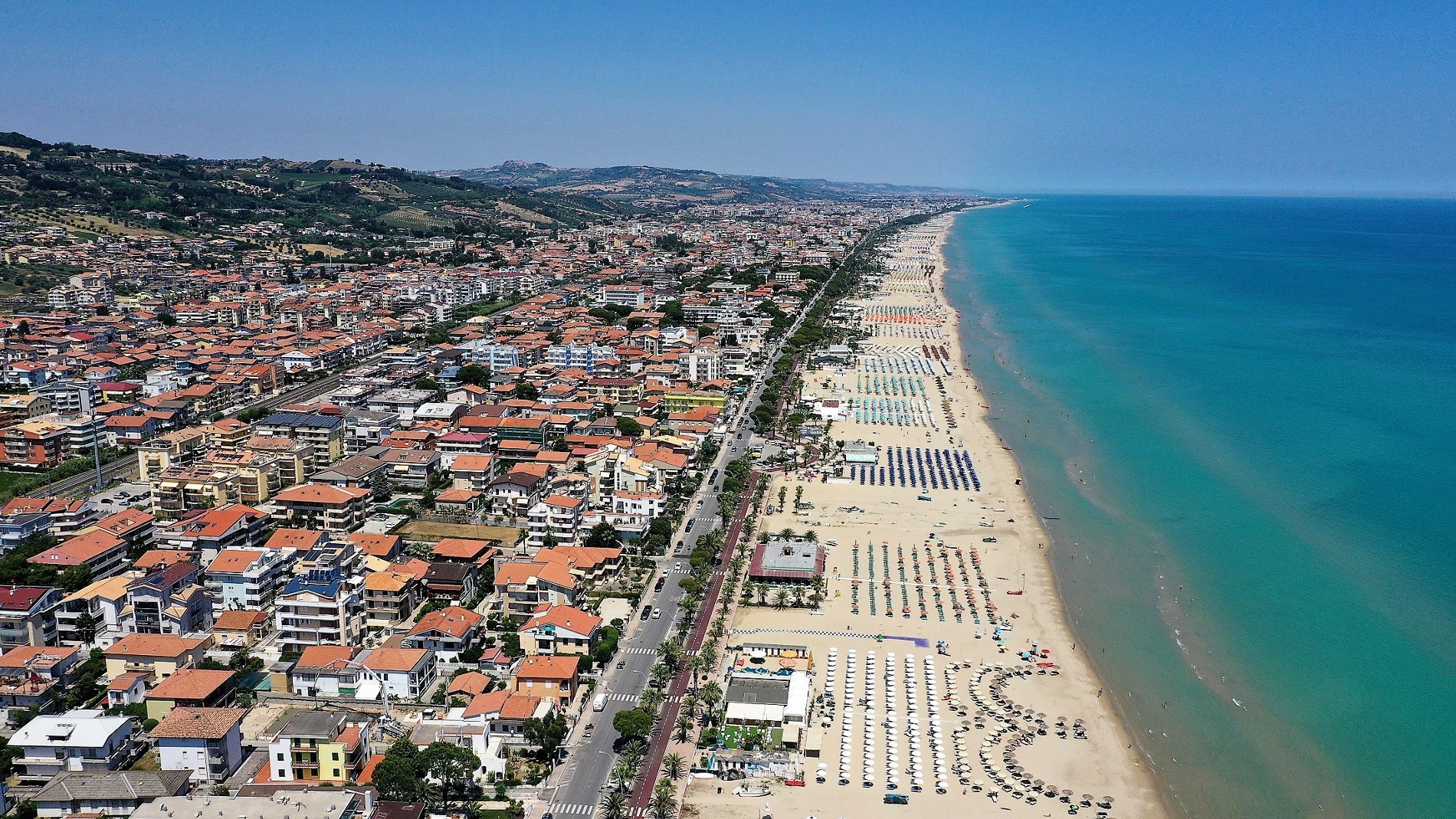 Continuing southward, past the large seaside resorts of Montesilvano, Pescara and Francavilla al Mare, the portion of the Chieti province's coastline between the municipalities of Ortona and Vasto is known as the Costa dei Trabocchi, named for the presence of ancient fishing machines suspended over the sea described by the poet Gabriele d'Annunzio as similar to "the colossal skeleton of an antediluvian amphibian." No longer active in their original function, there are currently about 30 of them still visible, most of which have been converted into restaurants where one can enjoy the typical flavors of Abruzzo's seafood tradition, from fried fish to succulent fish broths. 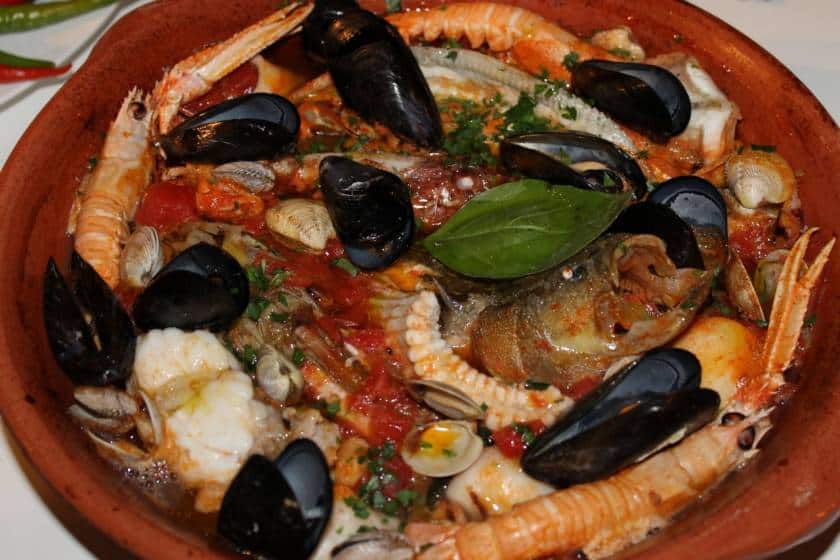 This stretch of coast is more irregular, characterized by rocky seabeds capable of restoring spectacular chromatic nuances to the waters of the Adriatic, although there is still no shortage of equipped lidos and large sandy areas that reach as far as San Salvo, the last seaside municipality on the Abruzzo coast before entering Molise, characterized by an original and fragrant Mediterranean Botanical Garden set up a stone's throw from the sea.

In addition to the charm in itself of these archaic pile dwellings, the Trabocchi Coast also offers a series of naturalistic, historical and architectural attractions of extraordinary value, from the Ripari di Giobbe and Punta dell'Acquabella nature reserves in Ortona and Grotta delle Farfalle between San Vito Chietino and Rocca San Giovanni, to the imposing Benedictine abbey of San Giovanni in Venere in Fossacesia, from which to enjoy a panoramic view of the hills juxtaposed with olive groves and vineyards against the backdrop of the Gulf of Venus. In Torino di Sangro, the Lecceta nature reserve represents one of the last remaining coastal forests still visible in Italy between the Gargano and the Conero. Through walking or MTB trails it is possible to reach the only authorized nudist beach in Abruzzo. 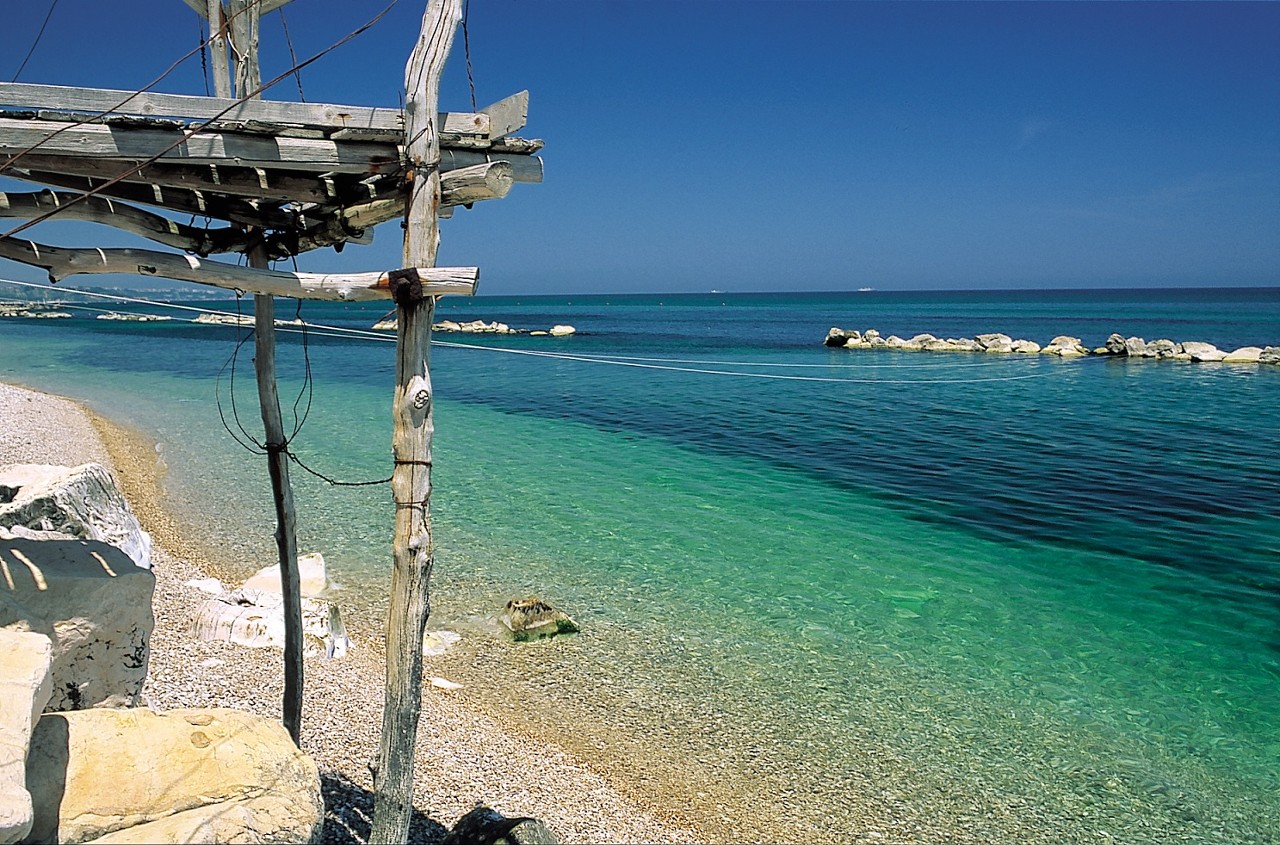 Beyond the mouth of the Osento River, among the sand dunes of Casalbordino, one can still make out a number of milestones that testify to the passage of the historic Tratturo Magno, the ancient road once used by shepherds with their flocks for the rite of Transhumance to Puglia Finally, with its evocative and high promontory from which to admire in the course of the day the sun rising from the waters of the Adriatic and setting behind the Apennine profiles, the nature reserve of Punta Aderci in Vasto concludes this immersion in the wonders of the Abruzzo sea, renewing in the eyes and heart of the traveler the enchantment for a land that never ceases to surprise. 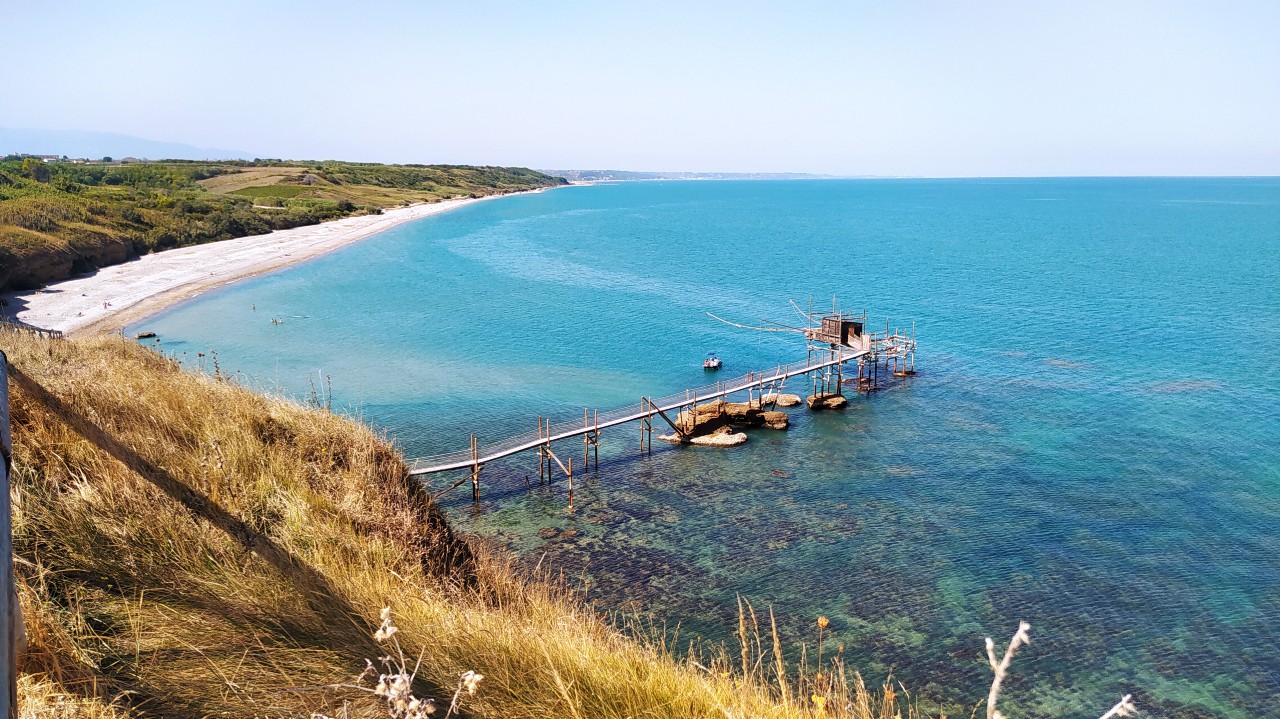