Barbara and Maria: the two ghosts of Sanvitale fortress in Fontanellato

Here is the story of a wonderful castle surrounded by a ditch of water, rich in architectural decorations and inhabited by the spirits of two women. 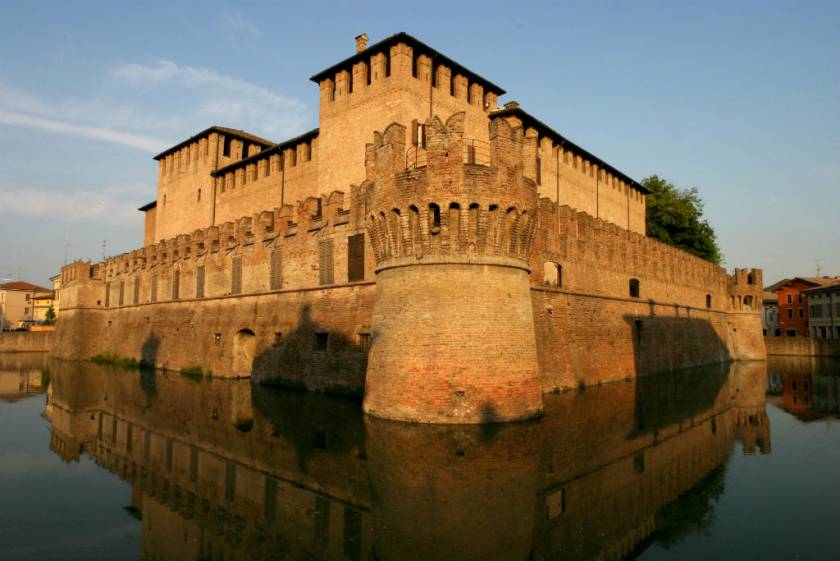 Sanvitale fortress, the castle in village of Fontanellato, near Parma, surrounded by a ditch, is a medieval manor known for the frescoes contained in the Salona di Diana and Atteone, and appreciated for the architectural peculiarities that characterize the whole structure of the building.

The artistic beauties, however, are not the only aspect that makes the castle famous. Like every medieval fortress, it hides mysterious legends and gives home to evanescent and sometimes scary, guests ...

It is said that in the manor lives the ghost of Barbara Sanseverino, a noblewoman who moved to Parma after her wedding with Giberto IV Sanvitale, Lord Baganza. She was so beautiful that Torquato Tasso dedicated to her the sonnet titled In lode de' capelli di D. Barbara Sanseverini Contessa di Sala, in order to celebrate her beauty and her marvellous hair. In 1585 his husband Gilberto died in Piacenza under mysterious circumstances, and the beautiful Barbara married in 1596 the Count Orazio Simonetta, a feudatory from Torricella, a village on the along the Po’ river, and then moved to Colorno, in the province of Parma as well. However, these wives gave birth, alas, to a cause of feudal law. The Duke Ranuccio Farnese, who wanted to dominate Parmesan town, began to argue that Sanvitale’s possession of Colorno was not valid, and he tried to annul it. In order to achieve his goal, he involved the greatest jurists of the time. The Sanvitale, on the other hand, once aware that the case would end in favour of their opponent, decided to start a conspiracy against the nobleman, to which many noblemen of the time took part in secret, to take off Ranuccio and reaffirm their rights.

Unfortunately, the conspiracy was discovered: one of the servants was imprisoned for conspiracy-related reasons and, once exhausted because of the tortures inflicted on him, he revealed some details about the conspiracy. All the conspirators were arrested and, after being prosecuted, on 19 May 1612, in Parma, Barbara and nine other conspirators were decapitated on the public square on a stage built near the Palazzo del Criminale, today at the corner between Piazza Garibaldi and the Road of the Republic.

According to legends, Barbara Sanseverino would still going around in noble floor, holding the head of her first Husband Gilberto in her hands. The supects would be fostered by the fact that in the bridal room of theFontanellato fortress there is a portrait of the beautiful noblewoman, to emphasize his connection with the castle, despite the fact that she moved away. If we add that in the gallery of the ancestors, which collects the portraits of the members of the Sanvitale family, the portrait of her husband Gilberto IV is missing, the mystery deepens.

But the beautiful Barbara is not alone, because she can enjoy the company of the spirit of Maria Sanvitale, the daughter of Luigi Sanvitale and Albertina of Montenuovo, who died when she was only five.  According to the legend, the ghost is imprisoned in the chapel of St. Charles, where there is also a small tombstone to remember its short existence, while in the Hall of Maria Luigia d'Austria is preserved a splendid bas-relief that portrays her tender face. But are we sure these are just legends? We know that the border between myth and reality is very subtle.

These stories, in fact, would also be confirmed by some examinations carried out in 2014. Someone found at least two sources of energy inside the manor, precisely in the rooms in which the ghosts are supposed to live: one in the ancestor's gallery and one in the chapel, both compatible with paranormal presence.

At this point, it is really difficult to decide whether to believe or not to what has just been told. And you? Would you be curious to meet the two girls in the famous castle surrounded by water?

What to see in Fontanellato

Rocca Sanvitale
The Sanctuary of the Blessed Virgin of the Holy Rosary
More...
are you an Italian villages lover?
Join our Community
and share you experiences!