Lampedusa: a holiday by the sea, wild nature and tranquillity

Lampedusa, known for being the landing place of African migrants, is above all one of the favorite destinations for those who want to enjoy a holiday between sea, wild nature and tranquility. 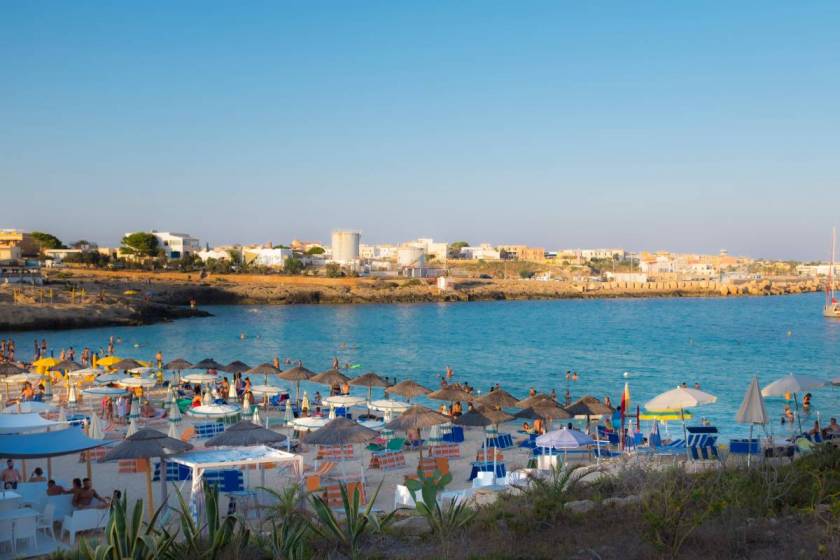 The island of Lampedusa is part of the Pelagie archipelago and lies in the heart of the Mediterranean Sea: despite being part of the Sicilian province of Agrigento, Lampedusa is in fact much closer to the African coasts of Tunisia, just 113km away, than those of Sicily 205km away. Its territory encloses the naturalistic characteristics of the European and African continents, among Maghreb plants, Mediterranean maquis and spectacular bays. 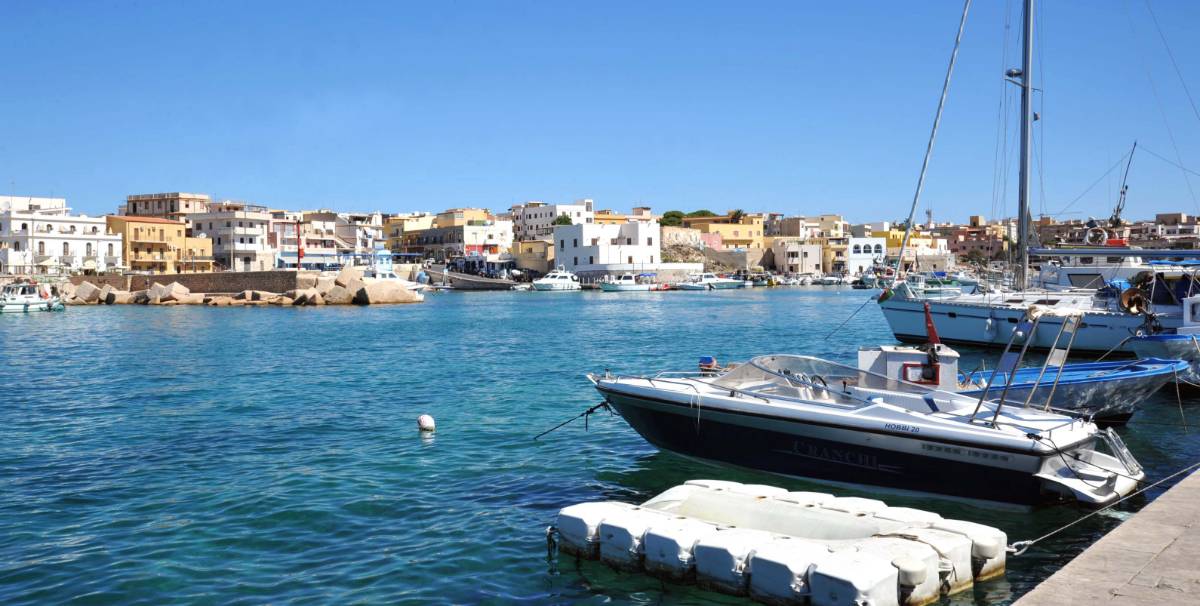 Walking in the city centre

The island of Lampedusa is often on the front pages of the daily news as the first port of call for migrants from the African coast: the Gateway to Europe is a work created precisely so as not to forget and make everyone reflect on the drama experienced by these poor desperate people in search of a more dignified life.
Lampedusa is, however, above all, one of the favourite destinations for those who decide to enjoy a holiday by the sea, wild nature and tranquillity. The Pelagie Island has in fact only one town and a small airport: just one day is enough to discover all the beauties of the island, being only 20km² large. The Puesta de Sol Residence, located in Cala Palme, is the perfect place to stay in Lampedusa, enjoying tastefully furnished rooms in Lampedusa style and a family atmosphere, without giving up all the comforts.
The town of Lampedusa revolves around Via Roma, where shops and bars abound: walking along it you will also find the Cascella Fountain, made of sparkling white marble, and the Historical Archive where there are books, photos and period films. Not far away, walking along a street dotted with chapels symbolizing the mysteries of the Rosary, you reach the Sanctuary of the Madonna di Lampedusa dating back to the 17th century. 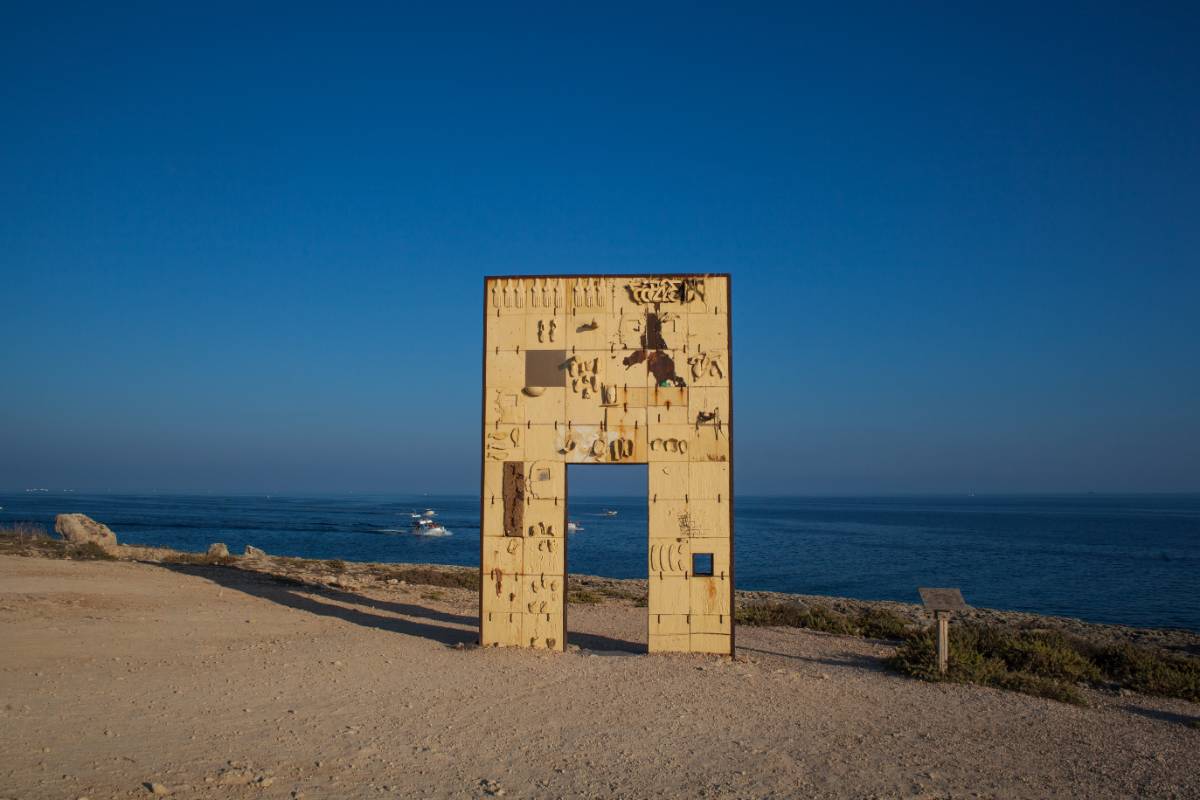 Don't forget that in this small town in Lampedusa there is a work by Arnaldo Pomodoro, the Obelisk Cassodoro, made in memory of those who perished in all the wars.
Recently inaugurated is the "Museum of Trust and Dialogue for the Mediterranean": inside you can admire a qibla indicating Mecca, the Head of Hades, paintings by Schifano, Caravaggio's Amorino Dormiente donated by the Uffizi Museum and a touching shipwreck room with the objects of all those migrants who lost their lives and dreams in the sea of Lampedusa. 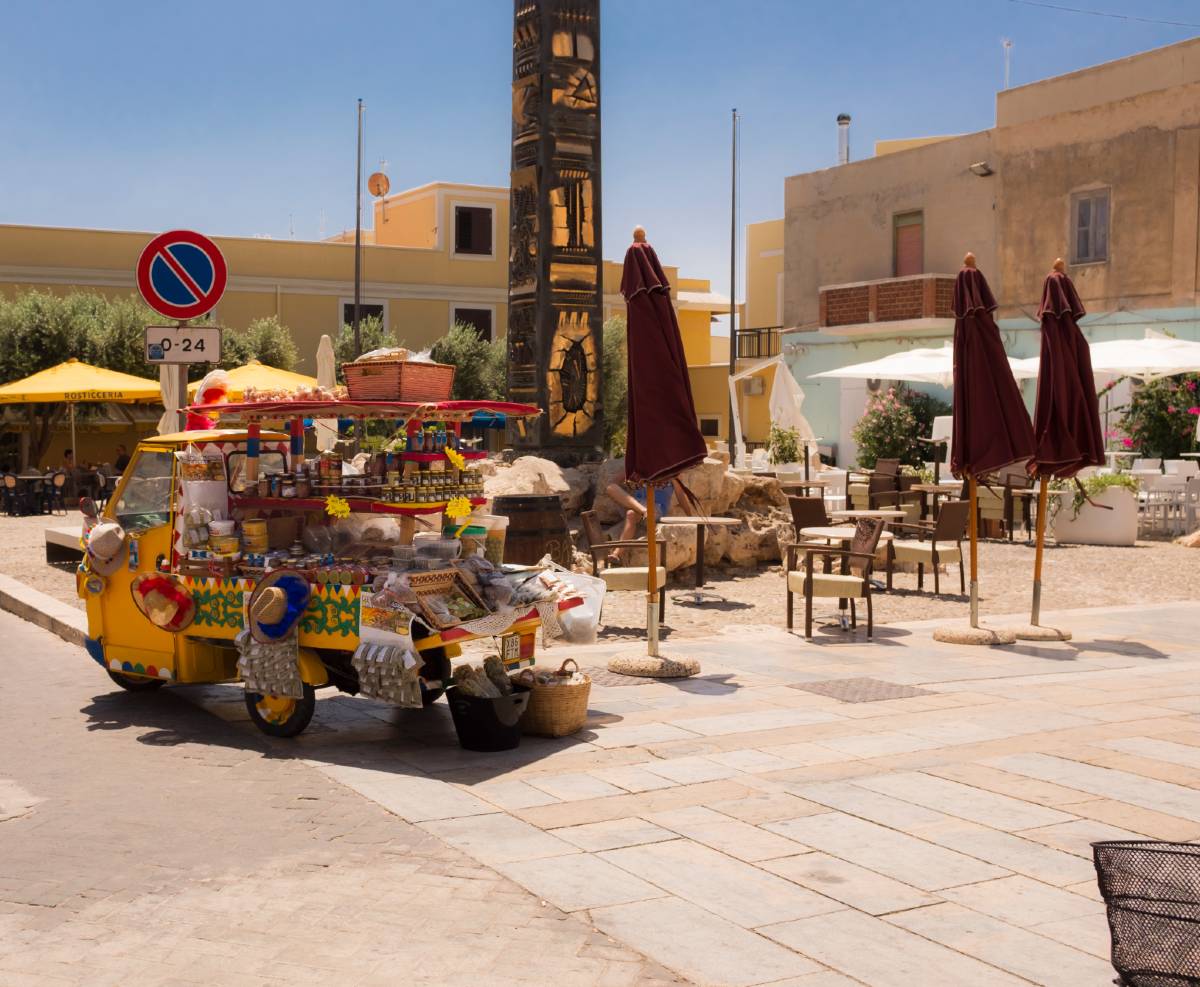 The most beautiful coves of Lampedusa

A stone's throw from the beautiful Cala Croce and the port of Lampedusa, from which exciting boat trips leave to swim among the dolphins and have lunch on board, is the beach of Guitgia, lapped by a crystal clear sea, equipped and with gently sloping seabed that make it perfect for children.
Not far from the town centre is the Vallone della Tabaccara, washed by waters perfect for diving lovers who can also go to Cala Mare Morto and Cala Pisana. 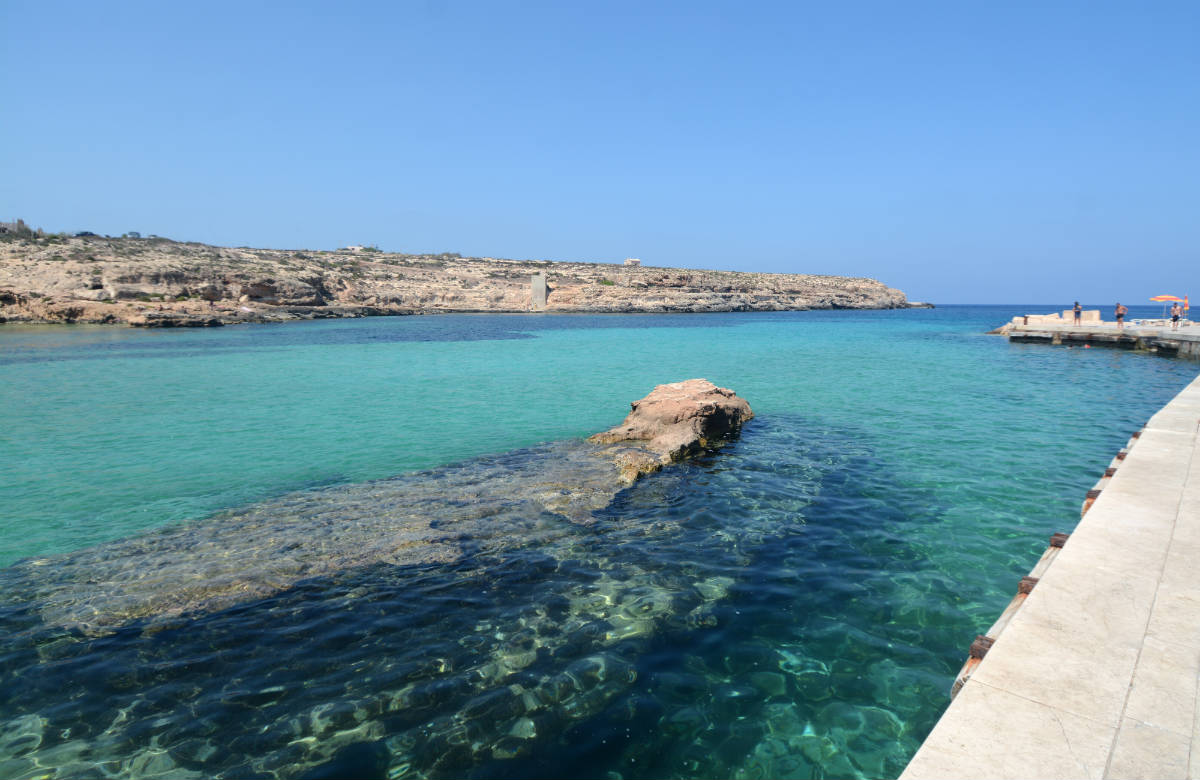 From the Vallone della Tabaccara you can easily reach Cala Madonna where in the past ships used to dock to stock up on water: above this bay there is the Sanctuary of the Madonna del Porto Salvo, white and heavenly. It was rebuilt after the Second World War, whose bombardments left miraculously intact that statue of the Virgin carried in procession every 22nd September.
Among the other jewel bays of Lampedusa you can't miss a visit to the spectacular Cala Pulcino with its white pebbles and the emerald sea: to reach it you have to walk for about forty minutes along a path as challenging as green starting from Casa Teresa. The latter is the oldest of the dammusi of Lampedusa, a typical building made with dry stone and domed roofs, a legacy of Arab civilization and an archaic example of eco-sustainable architecture. 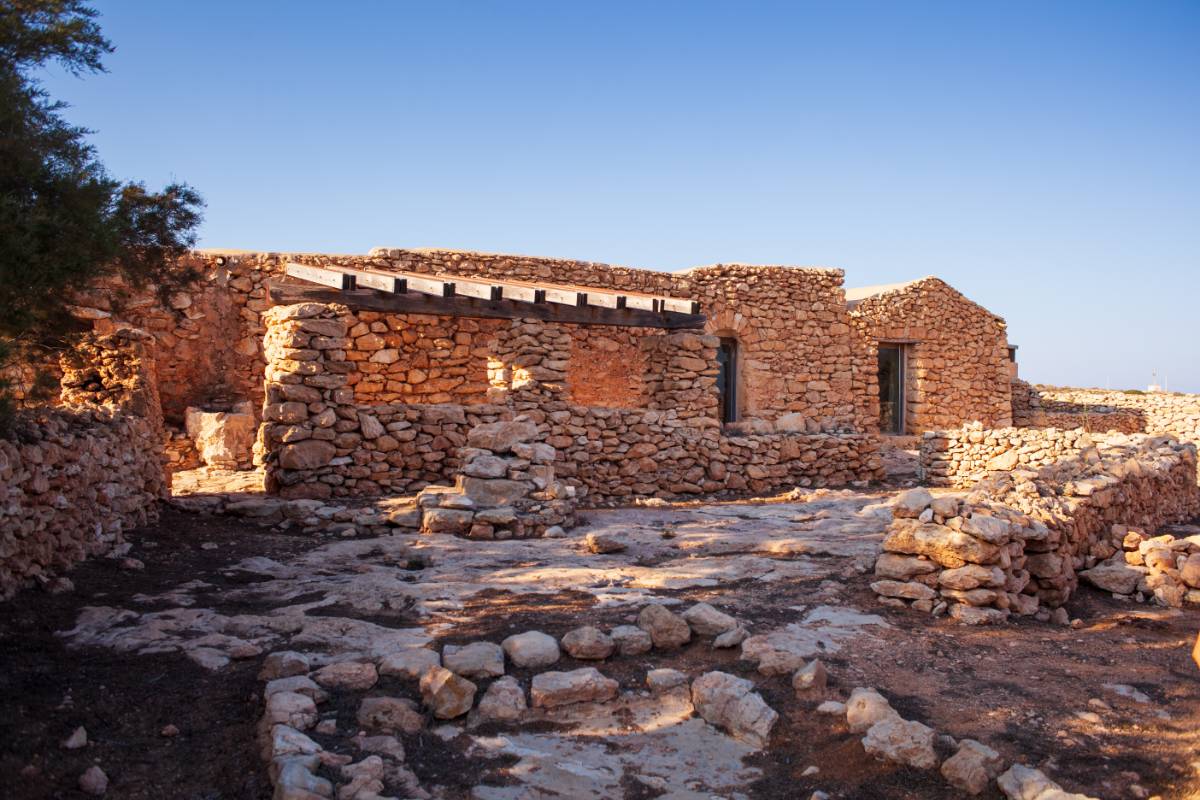 Among the most spectacular places of Lampedusa there is undoubtedly the Lighthouse of Capo Grecale, built overlooking the sea and reached by a bare path surrounded by the sea.
The last gem is the Rabbits' Beach, considered one of the most beautiful on the planet: part of the Natural Reserve of the Island of Lampedusa, on this white sandy beach the caretta-caretta turtles lay their eggs between June and September. In front of the beach stands the Isola dei Conigli, habitat of lizards of Arabic origin and the royal seagull and reachable by walking along the stretch of sea just 1mt deep. Immersed behind the islet you can see a natural arch, now prey to sponges and madrepores, and the Statue of Our Lady of the Sea located about 14mt deep.

Balata Bianca Charming Rooms
An elegant design accommodation in Lampedusa, cared for in every detail by its owners.

Via Francesco Riso, 38 – 92031, Lampedusa
Puesta de Sol Residence
Puesta de Sol, in Cala Palme, is the ideal choice for those who want to enjoy every moment of the...