Share
The village of Tropea looks like a rock balcony overlooking the Tyrrhenian Sea. Famous seaside resort, of great interest is the historic center of the village, consisting of noble palaces of the nineteenth century, located on the cliff overlooking the sea. The main product of the village is the well-known red onion of Tropea, characterized by a sweeter flavor than the white one 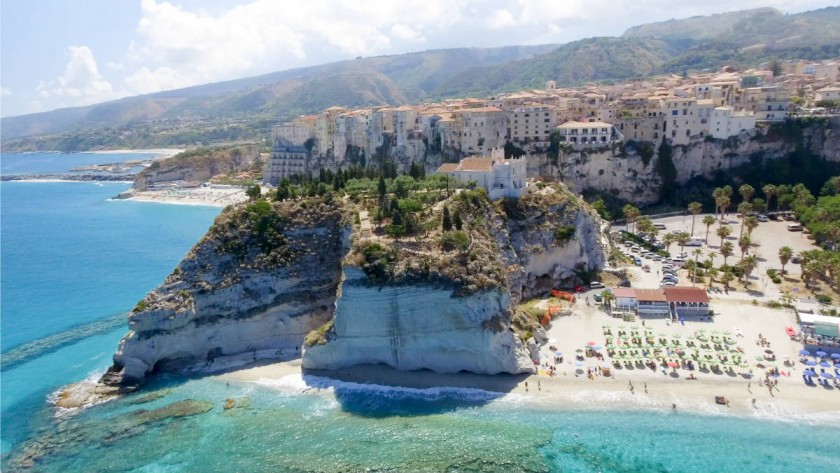 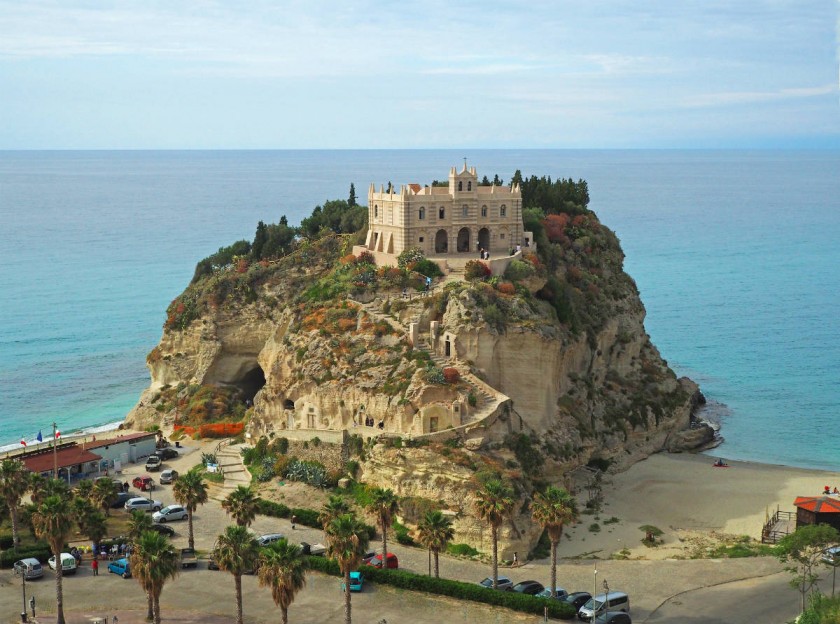 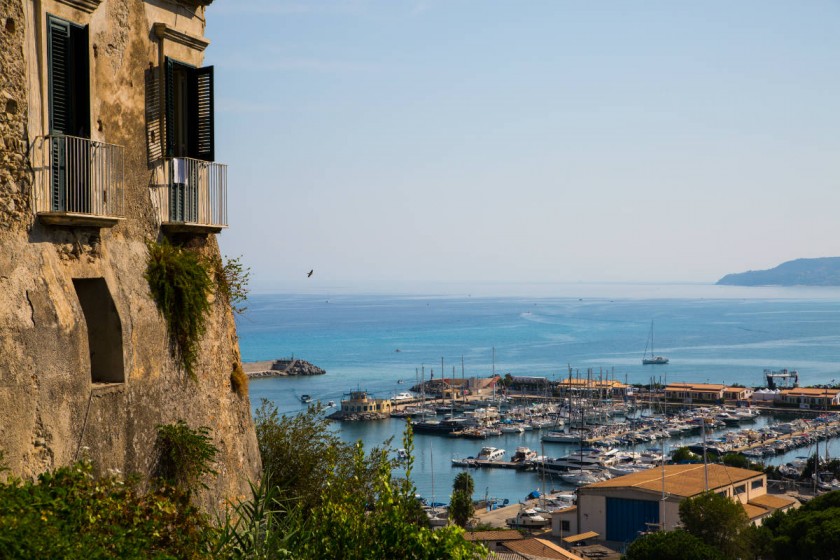 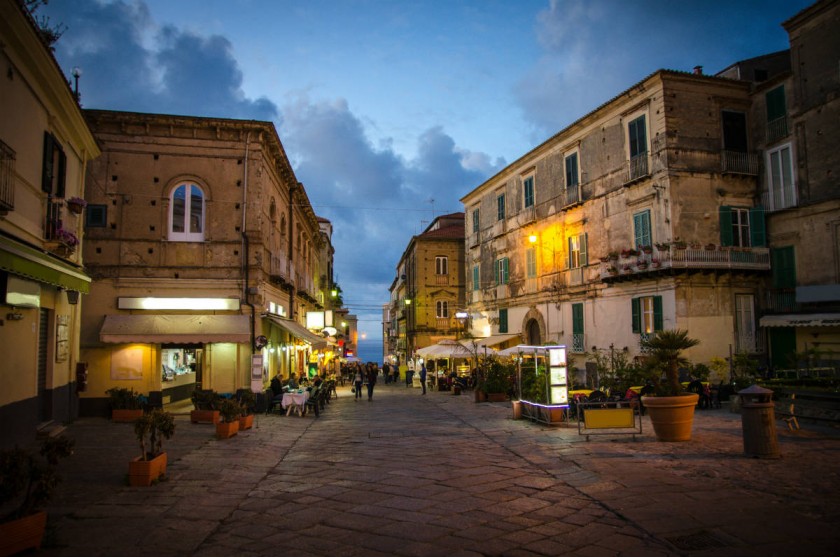 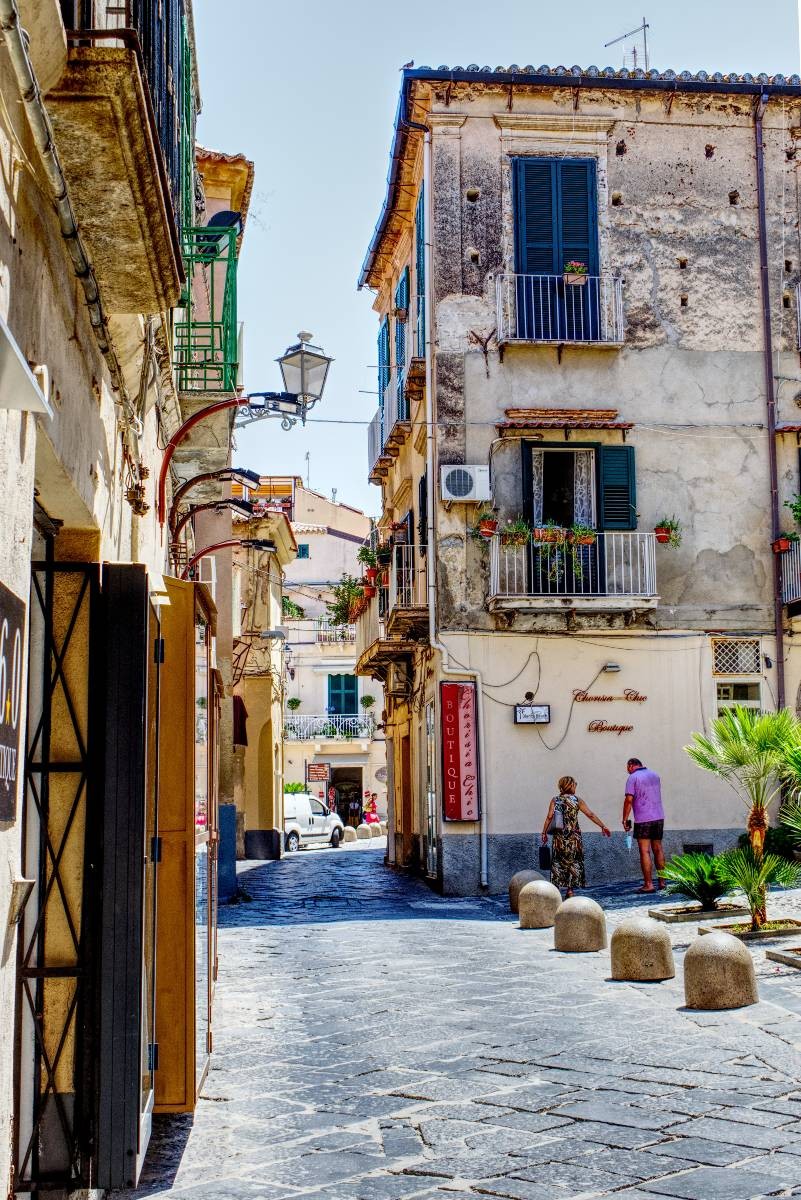 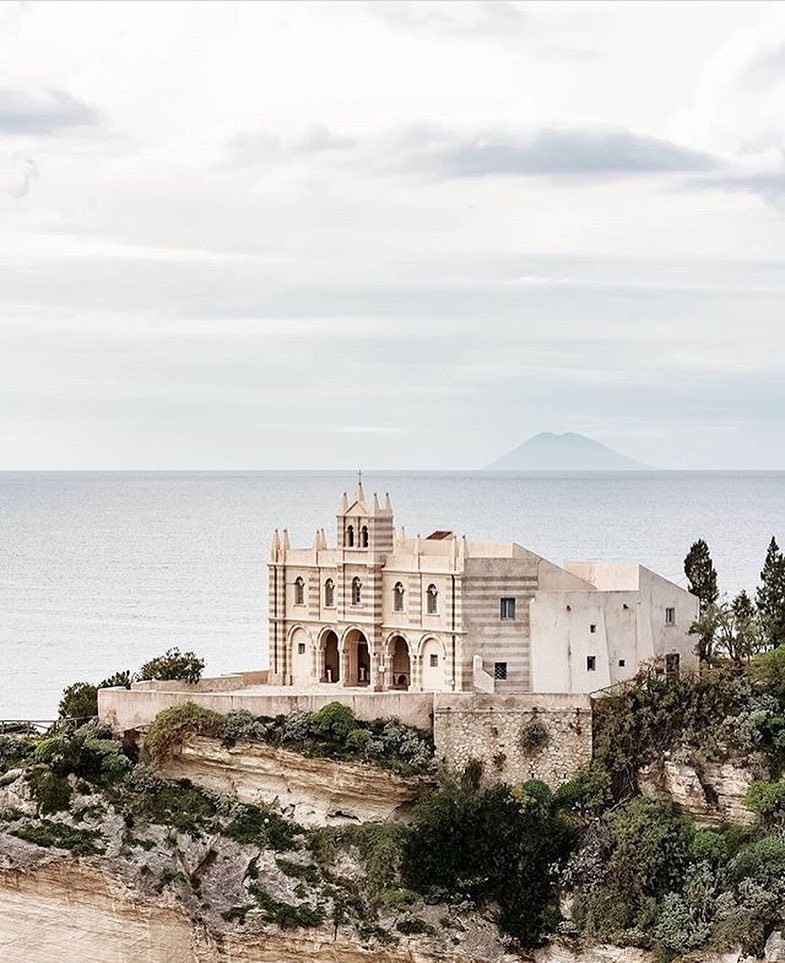 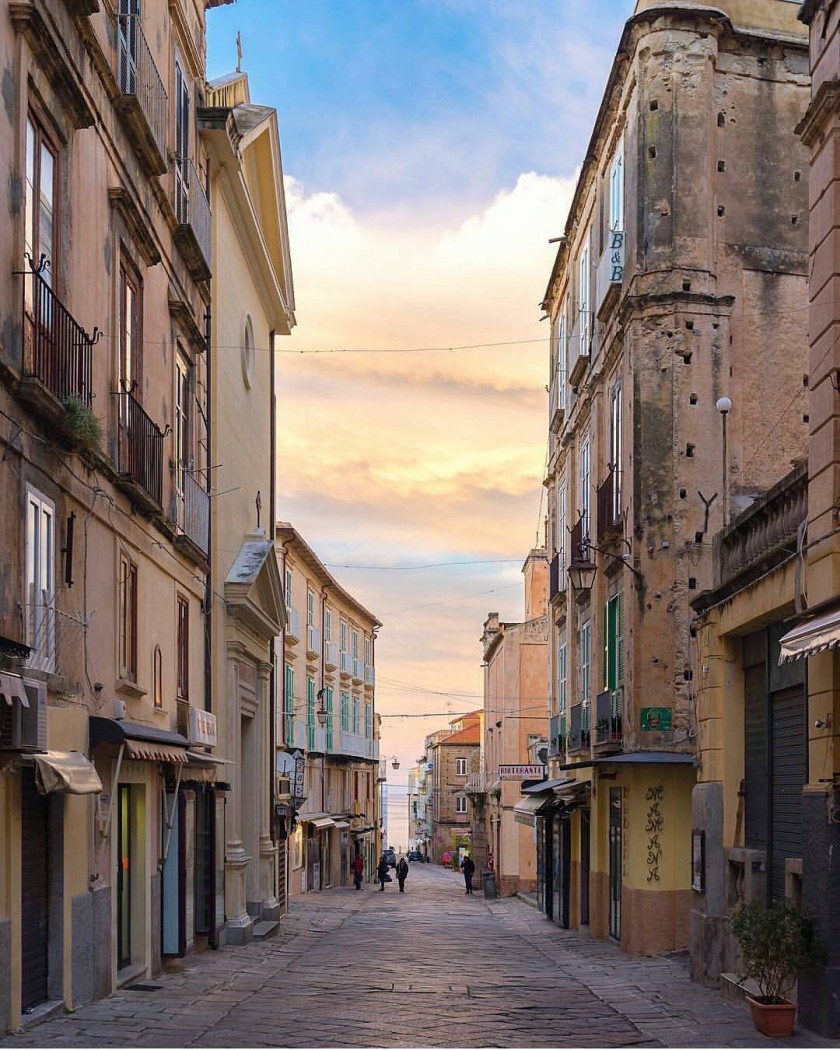 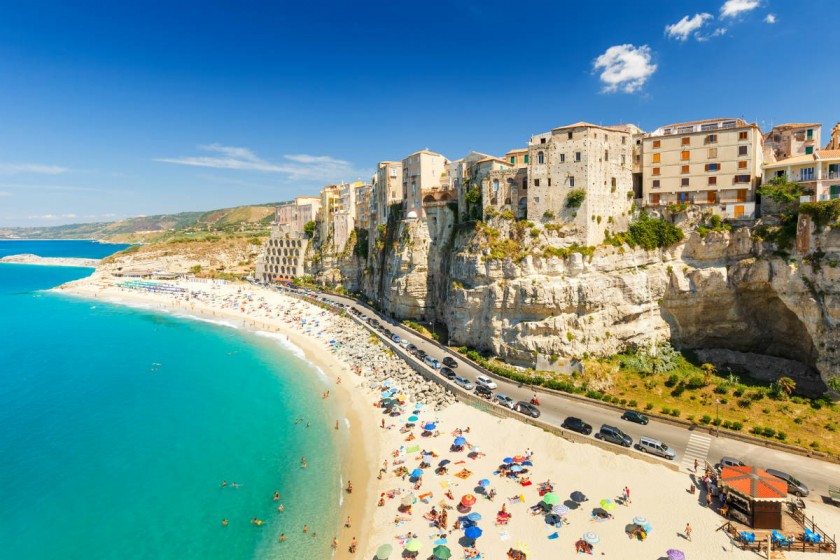 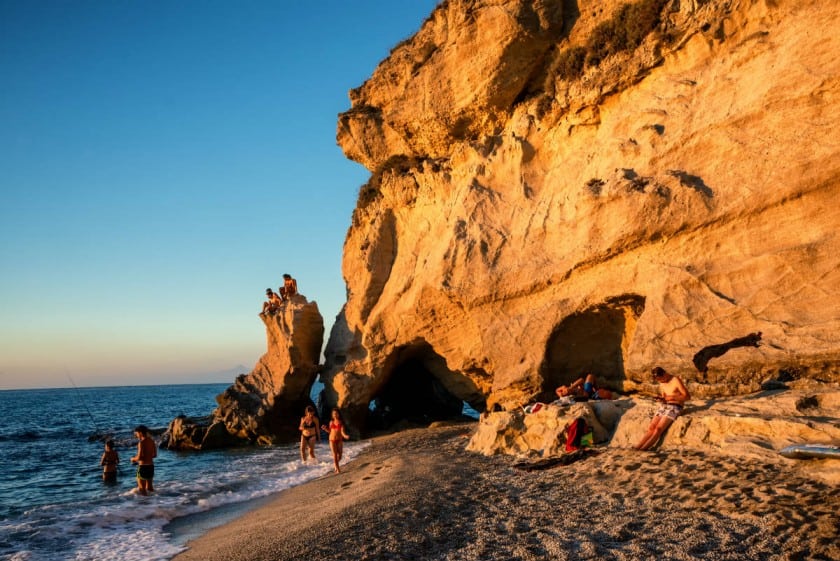 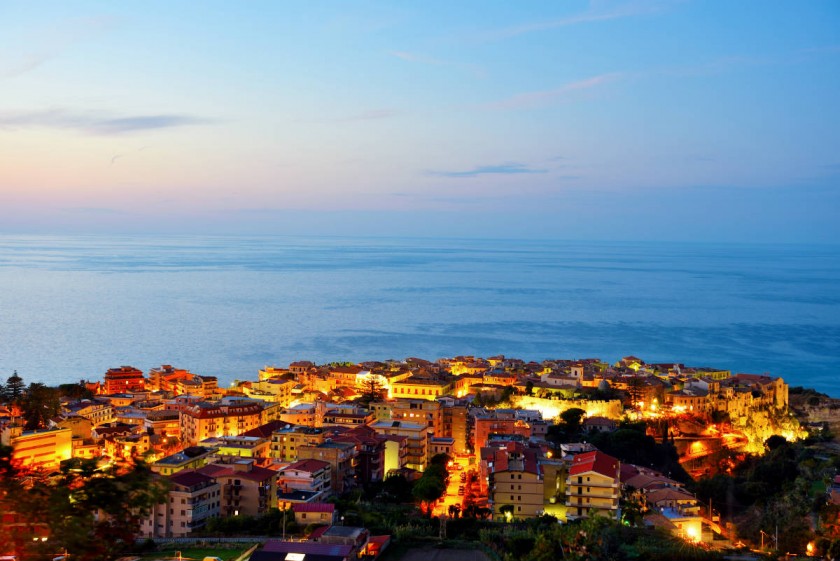 A look at Tropea 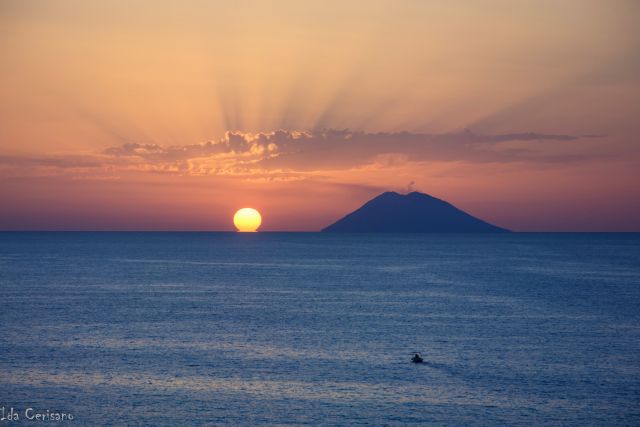 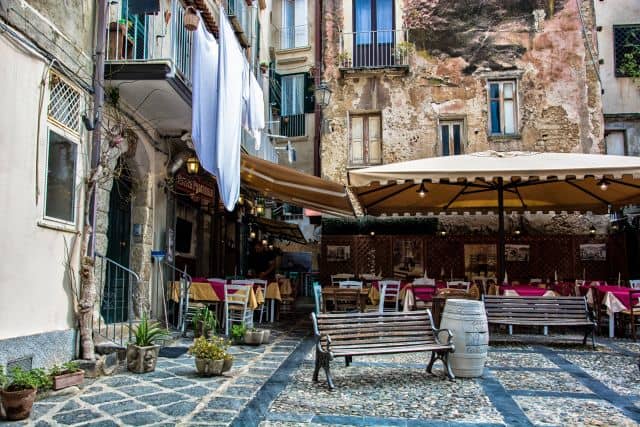 The places of the historical center
Ida Cerisano - e-borghi Community 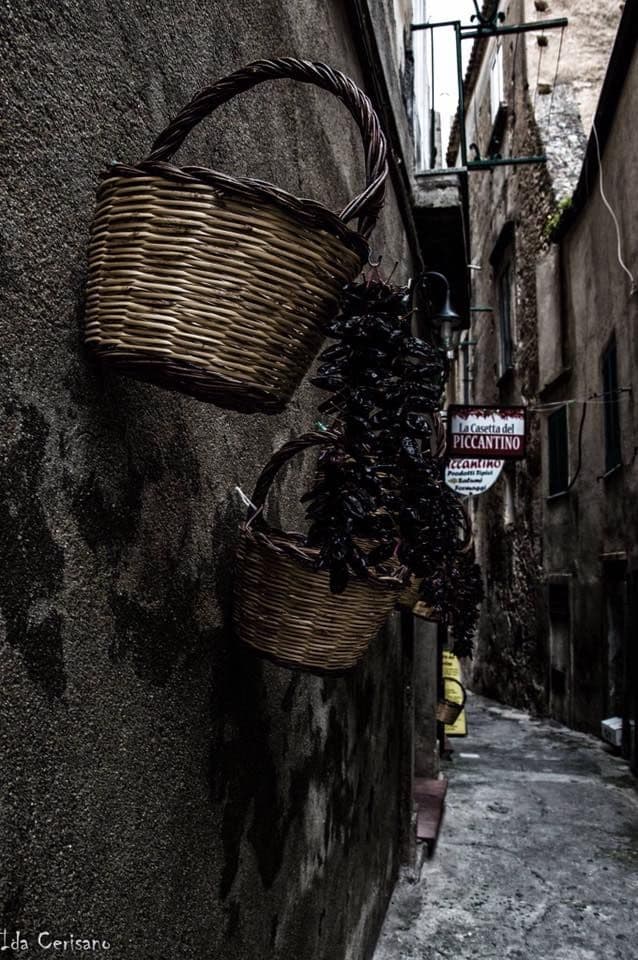 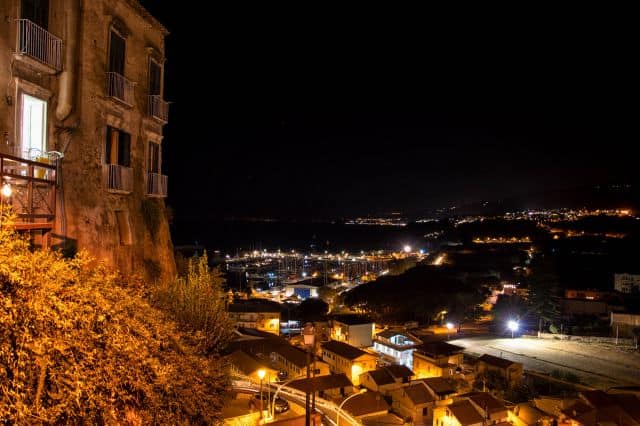 The port of Tropea seen from the historic Piazz...
Ida Cerisano - e-borghi Community 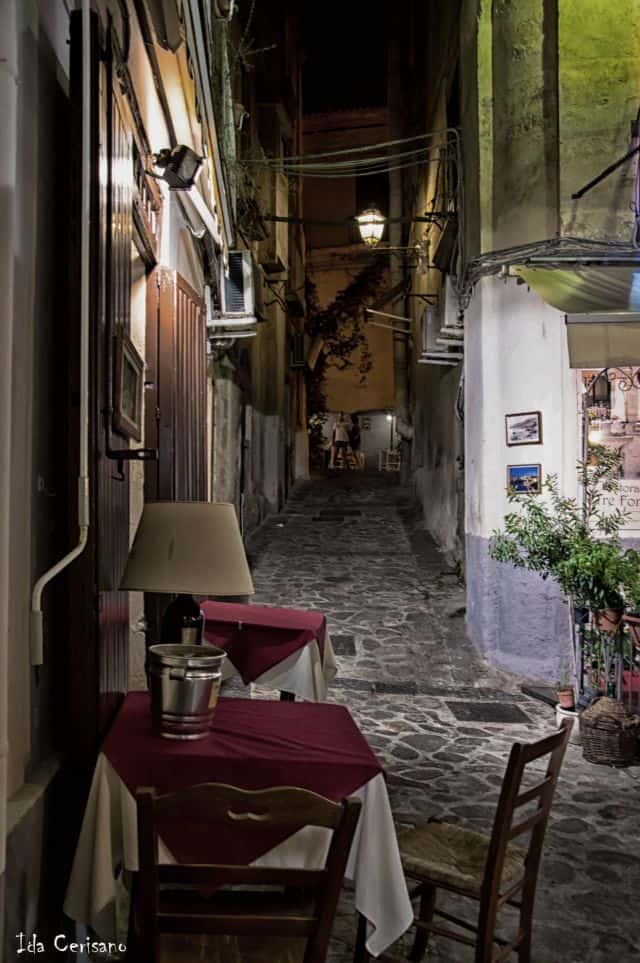 The village of Tropea (Tropaea in Latin and Τράπεια in ancient Greek) presents itself as a balcony of rock overlooking the Tyrrhenian Sea. The town is divided in two parts: the upper part, where you will find the majority of the population and where he plays the daily life of the country, and a lower part (called "Marina"), which is located close to the sea and the Port of Tropea. In the upper part, is built on a rock overlooking the sea at a height above sea level which varies between approximately 50 meters at the lowest point and 61 meters at the highest point. The town was a time walled incastellato and on one side and there could only be accessed through the doors provided with defense systems.

The legend wants that the founder has been Hercules when returning from the Columns of Hercules (Spain), stood on the coasts of southern Italy. In nearby areas were found tombs of origin magno-Greek. The history of Tropea begins in roman times, when along the coast Sextus Pompey defeated Caesar Octavian: south of Tropea The Romans had built a commercial port, near the current Santa Domenica, Formicoli (toponym derived from a corruption of the hole of Hercules), they speak about Pliny and Strabone. For its characteristic position of terrace on the sea, Tropea had an important role both in Roman times both in the Byzantine era; many are the ruins left by the Byzantines, as the church on the headland or the city walls (termed "mura Belisario"). After a long siege, the city was torn to the Byzantines by the Normans, under which prospered. Tropea continued to flourish even under the dominion of the Aragoneses.

Note seaside resort, rises on a high ridge of tuff, Tropea overlooking the Tyrrhenian Sea, in Calabria. Of remarkable interest is the historical center of the city, with many noble palaces of the XVIII and XIX century, perched on the cliff overlooking the beach below. Interesting are the "portals" palaces which represented the noble families; some are equipped with large tanks dug in the rock, which served to accumulate the wheat from Monte Poro, which subsequently was loaded through ducts of terracotta on ships moored under the cliff of Tropea. The symbol of the city is the sanctuary of Santa Maria of the island, that rises on a promontory in front of the town.

Of great interest is the Cathedral of the Blessed Virgin Mary of Romania, building of 1100, in romanesque style, containing the sacred effigy of the Madonna of Romania, patron saint of the city. The ancient Convent of the Pietã , built in 1639.In addition, the city houses the Diocesan Museum, containing ori e of the cathedral and several articles of various eras. At the church, the ancient premises of Vescovato, was established a Diocesan Museum, with interesting paintings, sculptures and frescoes, artifacts and furnishings. Recently, moreover, has been opened the archaeological section.

Important is the cultivation of the famous Red Onion, sweeter with respect to the white. Other typical products and crafts of relief are nduja of Spilinga, pecorino cheese of pore, extra-virgin olive oil, wines and terracotta, the baskets, the baskets and panniers wicker.

the Municipality is part of:
Città dei sapori

Cathedral of the Blessed Virgin Mary of Romania
The Cathedral of Holy Mary of Romaniais located inthe village of Tropea, in Calabria.
Largo Duomo, 12, Tropea
Sanctuary of Santa Maria dell'Isola
The Church of Santa Maria dell'Isola di Tropea is one of the symbols of all Calabria and the village
Via Lungomare, 89861, Tropea
Mesiani Palace
The Palazzo Mesiani di Bova dates back to the 18th century and is connected to the ancient site w...

Find where to sleep in Tropea

Feast of Our Lady of the Isle

Our news about Tropea

Land of legends, sea and lots of sun, Calabria in 5 extraordinary stages
When we talk about Calabria, our thoughts immediately turn to the splendid panoramas, the miles of jagged coastline and a sea of the most varied colours, which brings back the happiness of carefree days spent on holiday. And yet the tip of the Boot is not only this, but also thousand-year-old history told by the many villages that animate the region and that seem to bring back to a past full of splendor.Legendary villages immersed in the sea, ...
Continue
Calabria of the villages, cribs and fairy tale places
The Calabrian villages as unique places, "intertwined" to the "people" who live there and animate them, but also as "places" of experimentation for new forms of hospitality, entertainment and sociality, destined to a tourist demand now very far from the patterns of mass tourism. The Villages of Calabria, also and however, as an extraordinary opportunity for growth for the territory and for the wellbeing of the local populations, on which, the...
Continue
Recipe: Tropea's spicy risotto
ALSO FOR VEGETERIANS Tropea, the Calabrian town known to everyone for its red onion, to which wehave  dedicated an article, with a sweet and delicate taste, and rich in beneficial properties for the body, offers many other culinary treasures. Delicious recipes that - thanks to their colours, scents and flavours - fully exalt the fruits of the te...
Continue
Tropea and its IGP red onion
Tropea is the pearl of the Tyrrhenian coast of the Calabria region. The wonderful sea, together with one of the most beautiful historic centres of the region, make Tropea one of the most appreciated destinations of the Mediterranean Sea. The symbol of the village is the high rock, from whose peak the church of Santa Maria dell’Isola dominates the surroundings. We heartily recommend you to reach it, in order to enjoy the splendid landscape along one of the most beautiful segment of the Calabrese Coast, with a view on the seve...
Continue
Borgo dei Borghi 2021: Vota il borgo del tuo cuore entro il 21 marzo
Photo © Copyright ANSA The television programme "Il Borgo dei Borghi", now in its eighth edition, officially starts again this year. An exciting challenge involving 20 of Italy's most beautiful villages, hosted by the talented Camila Raznovich. Italian villages encapsulate culture, gastronomy and age-old traditions that allow tourists to get to know the true essence of that place.It is precisely for this rea...
Continue
In Tropea the flowers are brought into play!
In Tropea, say it with a flower. In the picturesque Calabrian village back the competition Windows, balconies, flowering alleys Anna Maria Piccioni - City of Tropea, now in its 12th edition. A "green" competition dedicated to the memory of the Umbrian painter who, in the shadow of the rock on which stands the famous sanctuary of Santa Maria dell'Isola, lived and taught for many years. The contest aims to enhance the most evocative views of the seaside tow...
Continue