Share
Lying on the Veronese side of Lake Garda, it has its origins in a very ancient history. Today it is an important tourist center full of hotels, campsites, hotels, restaurants and campsites that make it one of the favorite destinations for tourists who spend their holidays on Lake Garda.

A look at Lazise 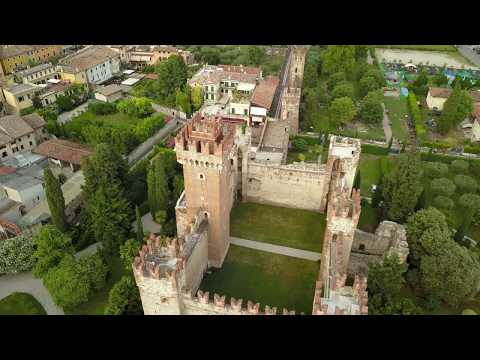 Lazise (Lasise in veneto) derives from the latin lacus that means "lakeside village", as would seem to confirm the documents of the High Middle Ages that indicate the country under the name of Laceses. The discovery of testimonies of aggregates of houses on stilts of the bronze age demonstrate the importance that had Lazise as prehistoric center. In Roman times the lake became an important communication route for goods arriving from Germany; administratively to Lazise you had the typical conditions of vicus and pagus. The country, under the domination of the Eruli, then of the Ostrogoths, and finally of the Lombards, you have only fragmentary news and rather general, if not almost absent, and one of the few testimonies found seems to support the thesis that in that period Lazise was subject to the count of Verona.

In 983 the community of Lazise churches to the Emperor of the Holy Roman Empire Brass II the opportunity to defend the town fortifying the castrum and the 7 of May of the same year Ottone II replied with a diploma in which gave the collection from some taxs (including teloneo and ripatico), granted the rights of transit and of fisheries, and handed to the lacisiensi the possibility to fortify the castrum. From that year onwards Lazise was then organized a Vicinia, with 18 members and broad autonomy in civil matters, economic, but also religious (from this year onwards it became the seat of the parson), so as to be able to regulate fishing freely and trade. It was a peculiar situation with respect to that of the other centers, and the granting of these broad autonomy, in addition of course to the allocation of posts, causes Lazise is considered the first free commune in Italy.

Under the Scaligers were built the castle and the city walls and in 1387, when the Scaligera regime was falling by the hand of the armies of the alliance formed by Gian Galeazzo Visconti, Francesco I Gonzaga and Francesco I from Carrara, the fortified village, which remained faithful to Verona, the doors closed and he prepared himself to the siege, which lasted several days. Lazise ceded to firearms enemies on 13 October 1387, it then passed under the Visconti rule under which was the seat of the vicariate of a jurisdiction rather wide, even if shortly after it passed under the dominion Carrarese. In 1405 there was the dedication of Verona to Venice but Lazise was the only village in the Veronese territory decided to revolt, so much so that it was put under siege and surrendered to the army of the Serenissima Republic of Venice on 23 June of the same year.

In 1439 the town was bombarded by the troops of Filippo Maria Visconti, where it was at war with the Venetian Republic, but after this brief interlude of war prospered peace, at least up to the events of the war of the League of Cambrai, during which a venetian galea autoaffondò you not to end up in the hands of the enemy in front of Lazise, who passed into the hands of Giovanni Gonzaga on 23 August 1510. Also the Gonzaga confirmed in Lazise the ancient privileges, but the village returned under Venice already in 1516. This was a continuous period of struggle which is arrested for this community only after the looting of Lazise on the part of the Lanzichenecchi in 1529: after there was however a period of prosperity that lasted for almost two centuries, dotted however from the plague of 1631 that decimated the population.

The French Revolution brought the consequences also in Lazise, because yes the passage of the French soldiers who had to go in the Tyrol, but especially because in the country was placed the quartier general french, so that the French militi ne took advantage to plunder the inhabited area. On 16 May 1797, moreover, was erected the tree of freedom between the indifference of the villagers. Lazise passed then to the Cisalpine Republic and then to the Kingdom of Italy, under which became the capital of the fifth district of Verona, but in 1815 Lazise again changed the flag passing under the Lombardy-Venetia Kingdom and therefore, in fact, under the Austrian Empire.

During the first war of independence italiana the piedmontese troops went to Lazise, where piling up the gunpowder coming from a powder keg conquered near Peschiera del Garda (an important fortress of the Quadrilateral), and from where it then moved toward Castelnuovo, where took place the homonymous battle. At the Pergolana furthermore there was this appropriation of troops. During the second war of independence in Lazise were transported via lago the wounded at the battle of San Martino, who were rescued in the harbor area, but it was only in 1866, following the third war of independence which Lazise became part of the Kingdom of Italy.

Certainly deserve a visit the Dogana Veneta and the old port, the church of San Nicolò and the Castello Scaligero.

In the centuries famous guests visited the lake, including Catullus, Goethe and Gustav Klimt, but the phenomenon of tourism of mass in Lazise began in the postwar period, when the inhabitants of the Alps, mainly German, began to descend toward the south, in search of a meta geographically close and economical. It was precisely the geographical proximity and the power of the German mark on the lira some among the causes that guaranteed the economic success of the town. The inhabitants of Lazise, up to that time devoted to fishing and agriculture, began to invest on tourism, building structures, such as hotels and campsites.

Lazise is a village with the most tourist influx of Lake Garda.

Village of Lazise
Municipality of Lazise

Via Castello, 44, Monzambano (Mantova)
16.52 Kilometers from Lazise
Castle of Castellaro Lagusello
The castle is an ancient fortress dating back to the XIII century situated in the village of Cast...

Via Castello, 62, Monzambano (Mantova)
16.62 Kilometers from Lazise
Visconti bridge
The Visconti bridge of Borghetto sul Mincio in Lombardy is a bridge-dam built in the XIV century.

Via Vittoriale, 12, Gardone Riviera (Brescia)
18.54 Kilometers from Lazise
shrine of the Bastia
The Sanctuary of the Bastia is situated in the surroundings of the town of Isola della Scala, in ...

Via Bastia, 19, Isola della Scala (Verona)
33.32 Kilometers from Lazise
Church of Formica
The small church of Formica is located on the shores of the River Tartaro in the hamlet of Isola ...

Residenza Sante
Residence Sante, a few steps from the historical center of Lazise, is ideal for a stay in the com...

Via san Martino, 7 - 37017, Lazise
Albergo Napoleone
Located 3 km from the village of San Giorgio and 10 km from the shores of Lake Garda.

Via Napoleone 59/61 , Sant\'Ambrogio di Valpolicella (Verona)
6.58 Kilometers from Lazise
B&B Casa Iole
The B&B offers all the comforts to guests, who choose it for its strategic location.

Via Casetta 226, Sant\'Ambrogio di Valpolicella (Verona)
7.73 Kilometers from Lazise
Ca' Spina: Sweet Home
Located at the feet of the village, it has been restructured with respect of the simple character...

Via Sengia 8/B, Sant\'Ambrogio di Valpolicella (Verona)
8.92 Kilometers from Lazise
B&B La Grande Casa
The excellent location allows you to enjoy a magnificent view from each room.

Piazza della Pieve 10 , Sant\'Ambrogio di Valpolicella (Verona)
9.73 Kilometers from Lazise
B&B Valentina
The B&B is located inside one of the most typical and ancient courts of Valpolicella.

Strada Moscatello 129, Monzambano (Mantova)
16.23 Kilometers from Lazise
Maison Resola
In the heart of Borghetto – one of the most beautiful bourgs of Italy – on the banks of the river...

Via Giambattista Tiepolo, 7, Borghetto sul Mincio, Valeggio sul Mincio (Verona)
16.79 Kilometers from Lazise
B&B Casa Iole
The B&B offers all the comforts to guests, who choose it for its strategic location.

Via Casetta 226, Sant'Ambrogio di Valpolicella (Verona)
7.73 Kilometers from Lazise
B&B La Grande Casa
The excellent location allows you to enjoy a magnificent view from each room.

Piazza della Pieve 10 , Sant'Ambrogio di Valpolicella (Verona)
9.73 Kilometers from Lazise
Ca' Spina: Sweet Home
Located at the feet of the village, it has been restructured with respect of the simple character...

Via Sengia 8/B, Sant'Ambrogio di Valpolicella (Verona)
8.92 Kilometers from Lazise
B&B Valentina
The B&B is located inside one of the most typical and ancient courts of Valpolicella.

The villages on the lakes that fascinated the Grand Tour travellers
Italy was the usual destination of the scions of the European aristocracy. The trip to the beautiful country in the 17th, 18th and 15th centuries was a sort of obligatory destination for poets, painters, cartographers and intellectuals of Europe, to experience their knowledge in the field and enrich their cultural background. The whole country was interested in it, the villages and lake hamlets were the most visited. Here is a small trip from ...
Continue
Extra virgin olive oil from Garda DOP: kindness and character from the shores of the lake
Italian olive oil, it is known, is one of the greatest assets of our territory, comparable for olfactory complexity, quality and productive research only to our best wines. Today we come to know a little special olive oil, an excellence of our territory that is born on the shores of Lake Garda: Extra Virgin Olive Oil of Garda DOP. A delicate, enveloping and elegant color, like the territory in which it grows. The first impact with this excellent raw material can only be visual: the difference betw...
Continue
10 things to do in 10 Italian villages, great classics and unexpected surprises
Did you know that in the village of Glorenza there is the only Italian whiskey distillery? And what is the Pinocchio Park in Collodi? Curiosities and ideas to live as protagonists all the magic of the villages of our Peninsula... Here are 10 Italian villages to discover and experience with many things to do. Ideas and curiosities for all tastes and for every season.
Continue