Share
Burano, one of the 10 most colorful villages in Italy, stands on one of the islands of the Venice lagoon, known for its lace making. Home to great artists such as Baldassare Galuppi, Remigio Barbaro and Pino Donaggio, Burano is the inspiration for Buranella Art.

Burano
TMP - An Instant of Time

A look at Burano 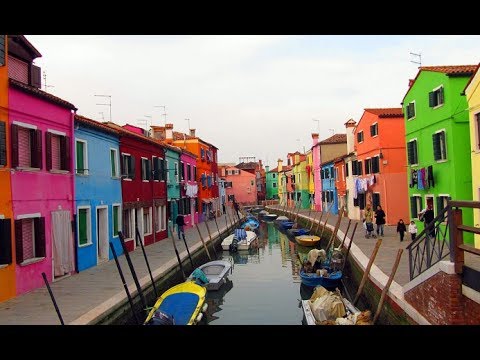 Burano is one of the four islands of the Venice lagoon, connected by a bridge to the island of Mazzorbo. The village is known for its typical brightly colored houses and for the centuries-old needle-work of Burano lace.

But why does each house have a different color? A legend says that the facades of the houses of the village are colored because the local sailors painted them to be able to recognize them on foggy days.

The heart of the village is Piazza Baldassare Galuppi, the only square in Burano, named after the well-known eighteenth-century composer overlooked by the church of San Martino, today the only church officiated on the island. Famous is its bell tower, characterized by a strong inclination. A short distance away is the church of Santa Maria delle Grazie, better known as the Church of the Capuchins, which today hosts art exhibitions and other events.
Also in the square is the Lace Museum, the Town Hall, the well made entirely of Istrian stone and the statue of Baldassare Galuppi made by Remigio Barbaro, a well-known buranello sculptor.

Although the manufacture of lace in the village of Burano is the main activity with regard to the craftsmanship, the working of the glass is also enchanting: a technique born in the nearby island of Murano, but very widespread also in the other islands of the Venice lagoon.
One of the most characteristic places in Burano is the intersection of 2 canals, where Tre Ponti stands, a characteristic wooden bridge that connects three districts of Burano: San Mauro, San Martino Sinistro and Via Giudecca. Here the most colorful streets of the island join, where the fishermen's houses and various craft shops are located.

Being an island of fishermen, the local specialties are fish dishes: spaghetti with clams, cuttlefish ink and lots of fresh fish, especially lagoon fish. The best known is the risotto di gò: the broth in which rice is cooked and whipped is made from "gò", a typical fish of the Venice lagoon, known throughout Italy with the name "gudgeon". The typical dessert of the village of Burano is bussolà, a yellow donut biscuit made of eggs, flour and butter, not to be confused with the "bossolà" of Chioggia, a donut toast. Tradition has it that the bussolà was prepared by the fishermen's wives, who went away from home for a long time to go fishing. In the event that the fishermen could not have a good diet, the biscuit provided to provide all the sufficient energy to face the sea life.

The 10 most beautiful alleys of the Italian villages
Italy is a land full of wonders and places to discover. Tourists from all over the world come to visit the villages of the country to discover characteristic streets and alleys that offer unique views of the world, characterized by small and narrow picturesque cobbled and stone streets that often climb to the heights and panoramic places overlooking breathtaking views. Getting lost in the alleys and streets of Italian villages is one of the be...
Continue