Share
The sixth most populous city in the Veneto region, Chioggia occupies a singular geographical position: between the sea and the lagoon, almost suspended between different shades of blue of the sky and water. Its structure has always intrigued scholars, travelers and writers, to the point of considering it a classic and highly cited example of an urban plan, thanks to the "Corso del Popolo", the true heart of the city, which crosses the historic center of Chioggia from north to south .

View on the Filippini bridge
REDMASON/shutterstock.com

The interior of cathedral
makalex69/shutterstock.com

Street with an arch and columns
makalex69/shutterstock.com 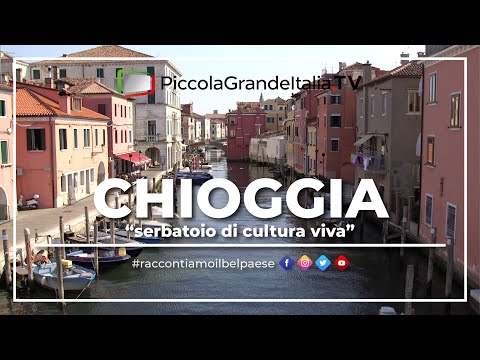 Chioggia (Cióxa in veneto chioggiotto) is located at the southern edge of the lagoon of Venice, in Veneto. With the Adriatic Sea to the east, north of the Delta of the Po, the village rises on a cluster of islets separated by channels and mutually connected by bridges.

The legend about the origins of Chioggia connects to that of Aeneas, mythical hero troiano fled the destruction of Troy that sailed for the Mediterranean and then settle down in Latium. With Enea And they journeyed also Antenore, Aquilio and Clodio that in the middle of the journey, separated from their fellow countryman toward Laguna Veneta founding respectively Padova, Aquileia and Clodia. A proof of this mythical foundation there is the symbol of the city, a rampant lion red on silver, chosen from Clodio itself in memory of his hometown, and the name of the city itself.

It can be assumed the birth of the city around 2000 B.C. by the Pelasgians, people of navigators originating in Thessaly, that would have colonized many cities in the coasts of the Adriatic. The name Chioggia and then derives from Cluza, "constructed artificially," to explain with the insular nature-lagoon of the city that without human modifications would have been submerged by water to every high tide. Other names present in the city are of undoubted preellenica origin, as Lusenzo channel and lagoon that is located between Chioggia and Sottomarina, Bebe, ancient tower which served as an outpost at the boundary between the Venetian territory and Paduan, Perotolo and Evrone. The first settlements are then by localizing toward the current Foce del Brenta, which at the time was another of the doors of the lagoon, with the name of Brondolo, in the islet of Vicus east of the Fossa Clodia, channel that corresponds now to Laguna del Lusenzo, and in the Evrone, which corresponds to the port of Chioggia. It is certain that the city was already present in the roman age. Proof of this is the typical structure of the geometric crosslinked that distinguishes Chioggia, formed by a "cardo", the current progress of the people, and by a "decumanus". As for all the Venetian cities, Chioggia was part of the "Tenth regio", which also included the Istria. Chioggia was especially important for its salt pans and its center of production of "Clugiae Sal" is considered one of the most prized by Cassiodoro and Pliny itself. The produced salt was essential for trade and its value allowed for people to be able to buy any other goods are often difficult to find in the lands of the lagoon. The "Clugiae Sal", salt of Chioggia, was considered a good of the State, which will bring the Confederazione Veneziana to combat numerous times against Padovani, Ferraresi, Romagnoli and Bologna, since it is imposed as a single commodity exchange for trade, to the detriment of other types of salt less renowned. With the slow decline of the Roman Empire, began to arrive also the first Barbarian populations that on many occasions there were not made scruples in razziare and devastate the rich lands of the Romans. The first to invade the venetian were the Visigoths that in the 401 d.C., controlled by their king Alaric, tried to go up to the Piemonte but suffered numerous defeats, while in 404 followed the Alans and vandals. Only 7 years later the Visigoths return in Italy and descending from the Venice arrive up to Rome grabbing and saccheggiandola. Between all the invasions, the more memorable is the Huns in 452 A.D. that, controlled by Attila took and destroyed Aquileia, Padova, Verona and numerous other lands of the region.

In 568 was formed the first venetian State, composed by the largest city of the adriatic coast governed by tribuni. The islands most conspicuous were: Grado, Bibione Caorle, Eraclea, Equilio, Torcello, Murano, Rialto, Malamocco, Poveglia, Chioggia Greater and Lesser Chioggia. The Chioggia Greater corresponded to the current Chioggia inside the lagoon, while the lower corresponded more or less to the current Sottomarina old overlooking the sea. In the years to follow for Chioggia and there was a period of prosperity, dotted with some small war with rivals Padovani and Treviso and by the arrival of the Barbarossa in the city which signed the "Treaty Clodiano" in 1177, preliminary to Venice which sanctioned a brief period of peace between the Empire and municipalities. From the point of view of political and administrative level, it passed from the tribuni to the podestà, a messenger of the city of Venice the representative of the Republic in the most important cities, which marked the beginning of the supremacy of Venice on internal policies of other cities in the Veneto region. An important page in the history of the city came during the so-called war of Chioggia (commemorated in the Palio della Marciliana), the last battle between the Republic of Genoa and the Serenissima Republic of Venice. In 1379 the city fell into the hands of Genoa, to then be reconquered by Venetian intervention in 1380. Chioggia became part of the Republic of Venice until 1797, the year in which he fell into the hands of the troops of Napoleon Bonaparte. Following the treaty of Campoformio, in 1798 the town passed in the hands of Austria, Under whose sovereignty remained except for a brief period in which subentrarono again french, until 1866, the year in which Chioggia was annexd to the fledgling Italian State at the end of the third war of independence, when, despite the military defeats suffered by the Italian forces, with the notable exception of the formations garibaldine, thanks to an alliance with Prussia, the Austrian government was forced to cede the Veneto and part of today's northeast Italy.

The historic center of Chioggia, if observed from above, appears in the shape of a fish-bone. The city is called the Little Venice for the urban features of the ancient area very similar to that of Venice, the capital of Veneto to which the city is connected. In Chioggia - kind of island connected to the mainland by a few roads - are present, then, like Venice, calluses, fields and channels. The main - from the point of view of tourism for the typicality of palaces and churches that there overlook - is the aforementioned Canal vein, crossed by nine bridges, in many respects similar to those present in Venice. The most impressive is the bridge Vigo that closes the channel near the lagoon leading to the homonymous square facing the station of boats directed to Pellestrina and in which reigns a high column surmounted by the lion Marciano, symbol of pride veneto but ironically called by the Venetians El Gato (CATS) because of much smaller than those of the lion of Venice, because of strong quarrels, the famous "rough", between the Venetians and chioggiotti, recent believing himself to be offended by the contempt that this epithet preclude.

The main resource and source of development is the fishing that makes Chioggia one of seaports more important Adriatic. Another source of income for this city is given by the agricultural production of radicchio (Rosa di Chioggia).

Carlo Goldoni - who lived for some years in Poli Palace - has set in this city one of his comedies more known, Le baruffe chiozzotte, represented for the first time at the Teatro San Luca of Venice in 1762.

The Municipality is part of:
City of bread

Tasty Veneto: North-East tastes
Veneto has a thousand facets. The sea, the mountains, the lagoon, the hills, the plains, the lakes, the cities of art and the historical villages. It’s one of the most varied mosaics of Italy and it’s one of the best known Italian geographical areas. It’s the Italian region where the most tourists go. It’s an area that can meet all the tourists’ needs even the most demanding ones by offering a wide range of option...
Continue
The fish market of Chioggia, a real tourist attraction
Did you know that, after the one in Venice, the largest wholesale fish market in the Venetian Lagoon (and, according to many, from the whole region), is located in Chioggia? Perhaps it is also for this reason that Chioggia is considered the "little sister" of the Serenissima. Moreover, if you have been in the Venetian capital, Chioggia will seem to you a miniature Venice for the similarity of the streets, the fields and the canals. In Chioggi...
Continue
Hilton Molino Stucky: starry lagoon
Caorle and Chioggia are seaside villages to visit slowly to appreciate all their seduction, but it is unthinkable to leave the province of Venice without going to the discovery of the Serenissima and its malia. In fact, in this historic and ancient maritime republic, Hilton Molino Stucky Venice allows you to rediscover the delicious flavors of classic cuisine in the fifth of the terrace of the Aromi restaurant, overlooking the Giudecca canal ...
Continue