Share
The village of Venzone is a fortified jewel between the mountain landscapes of the Tagliamento and the Canal del Ferro. The built-up area is one of the most extraordinary examples of architectural and artistic restoration. In addition, the village is a heavenly place for nature, trekking and mountain biking lovers thanks to a unique territory and the vastness of plant and animal species that inhabit the Julian Prealps Natural Park. 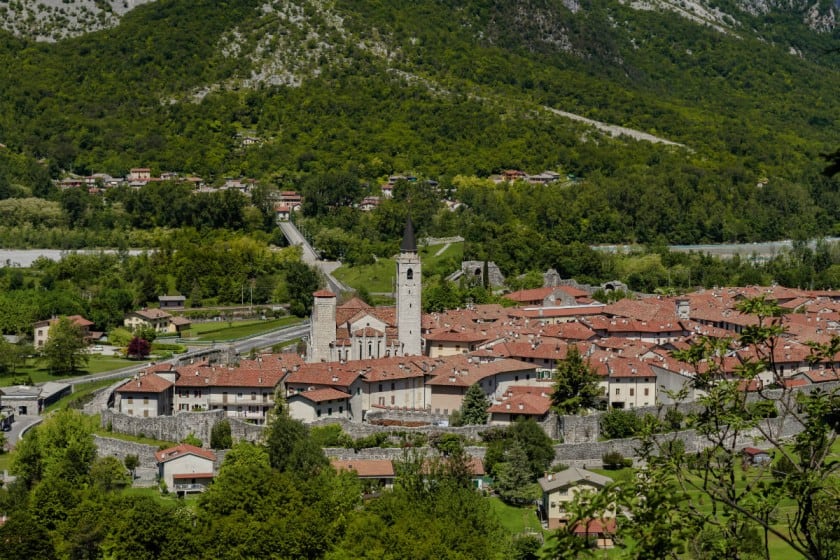 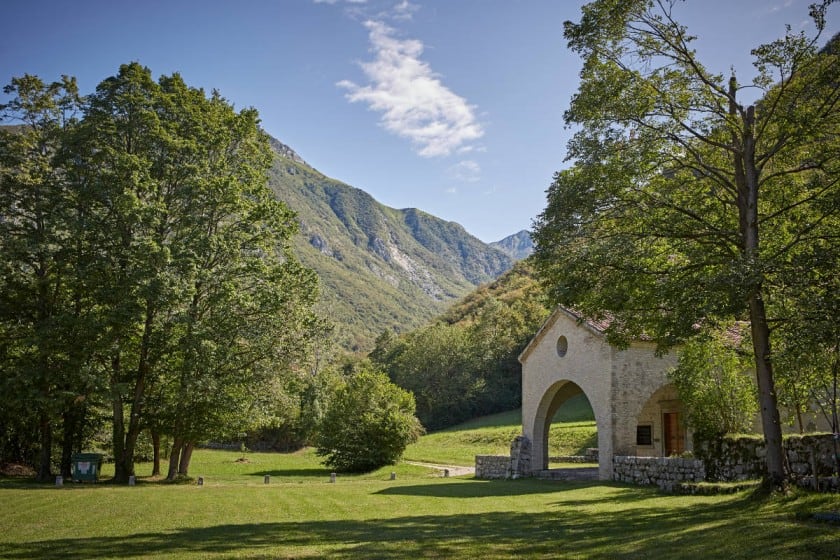 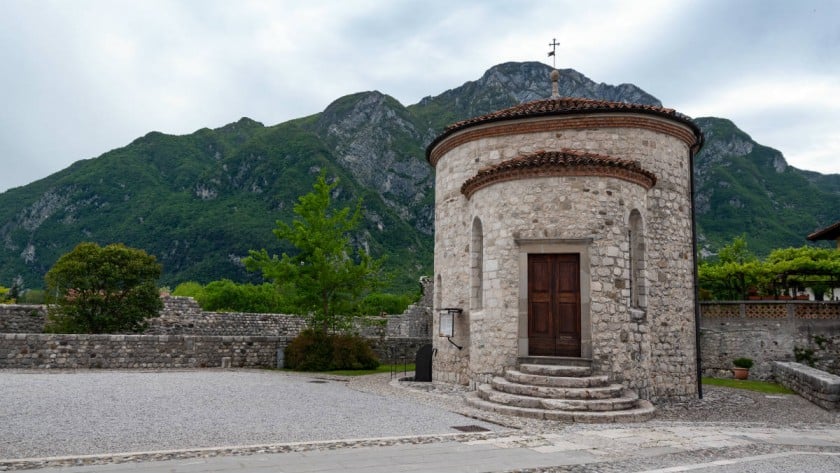 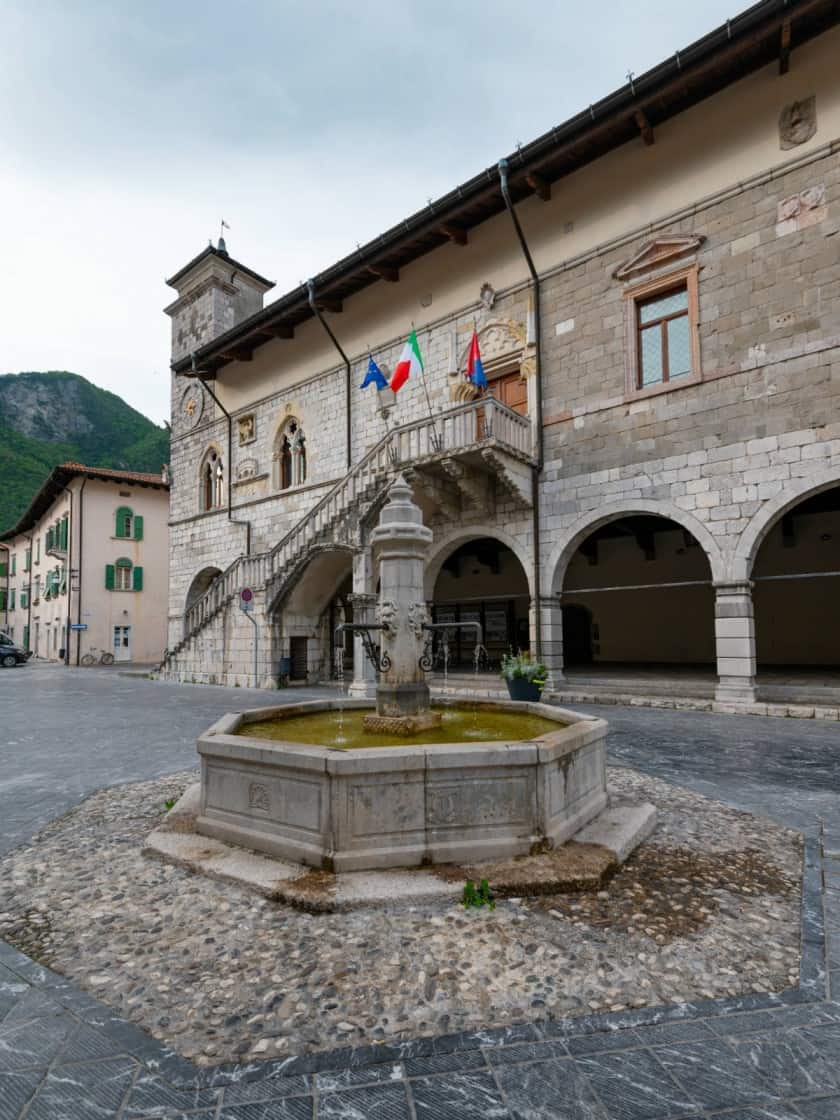 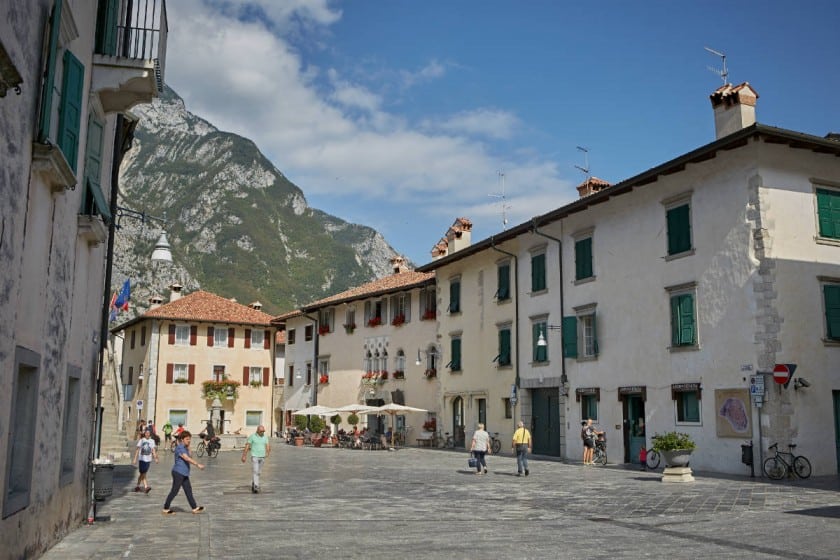 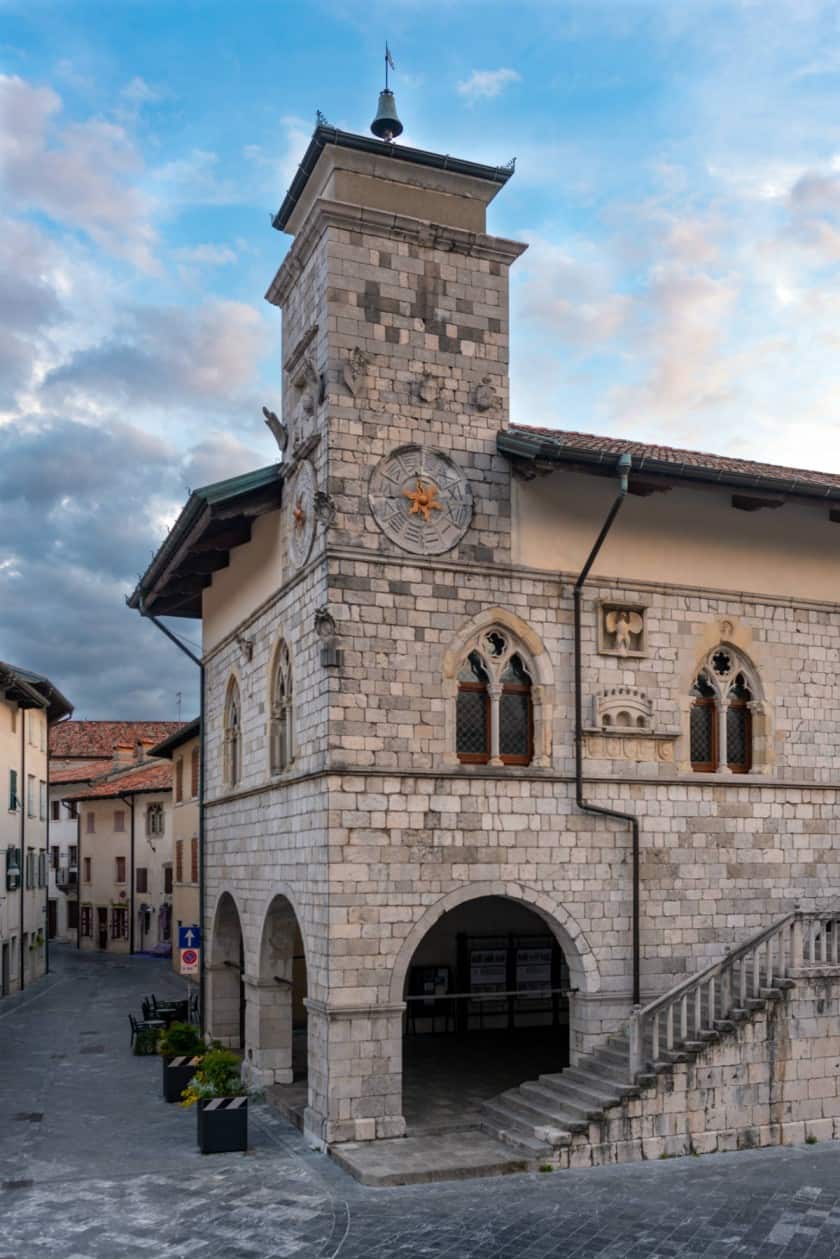 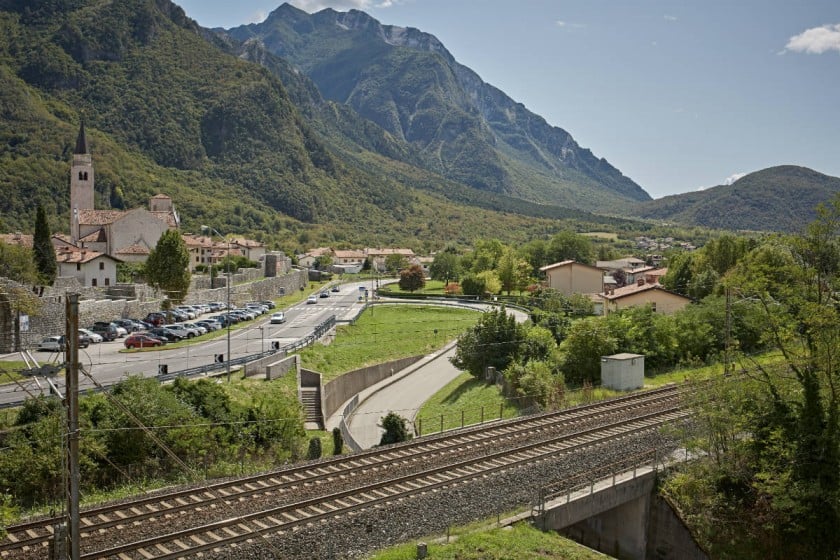 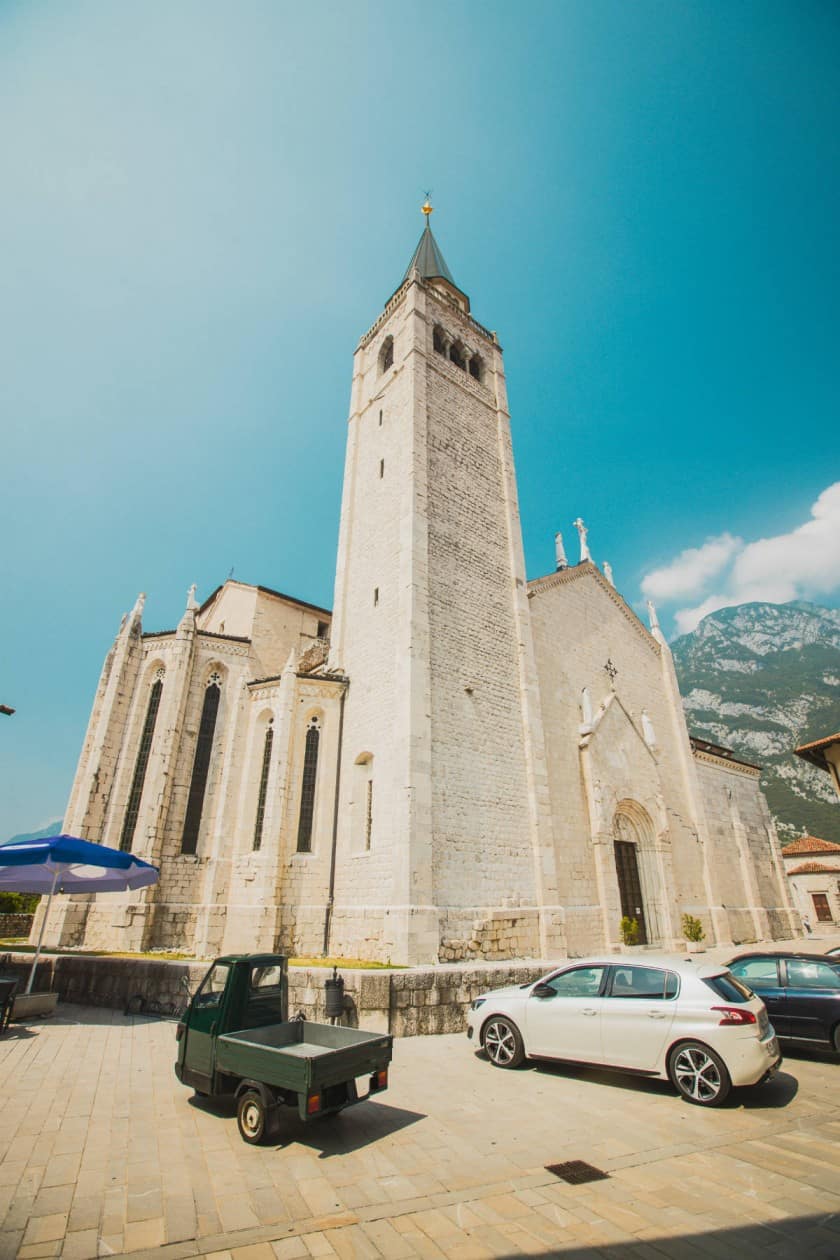 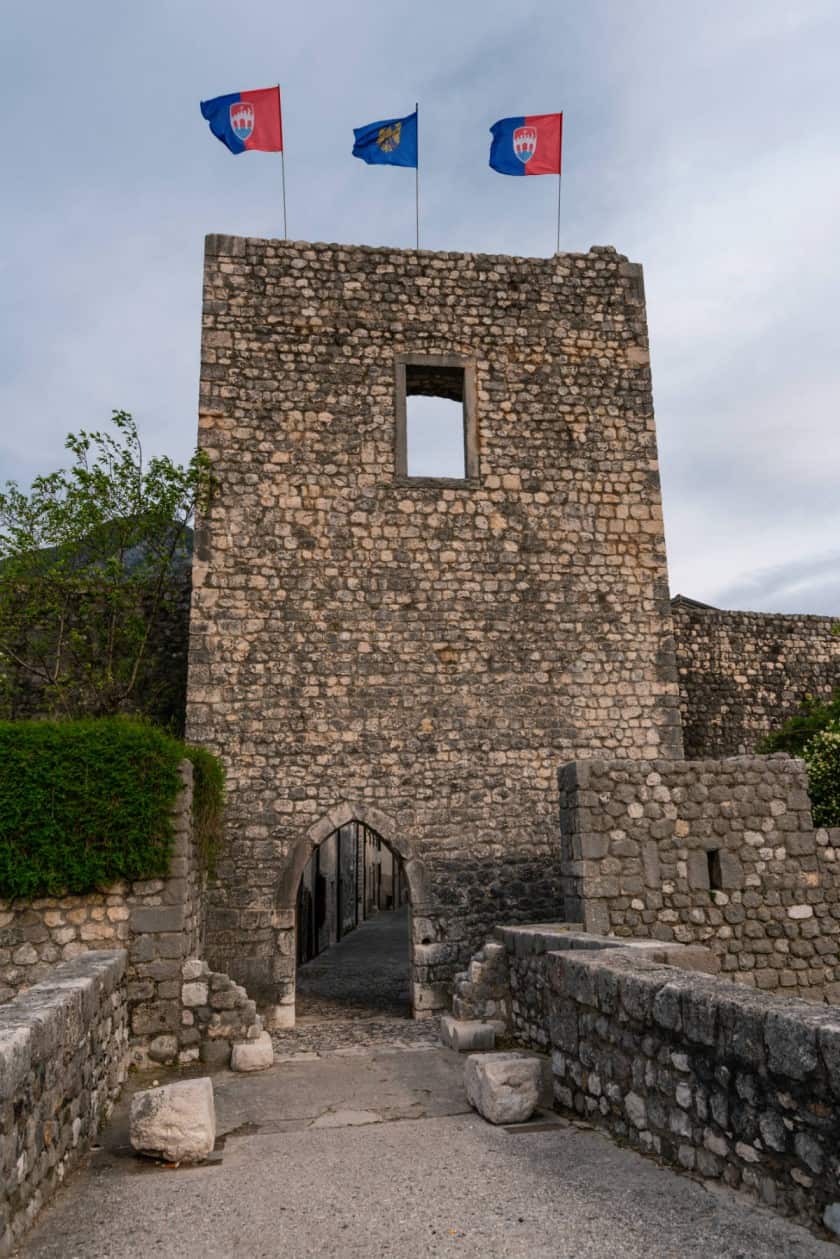 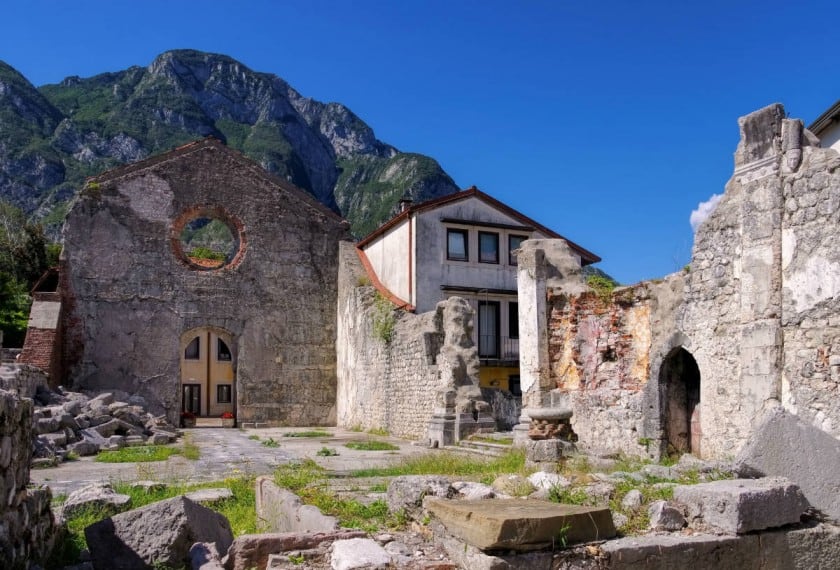 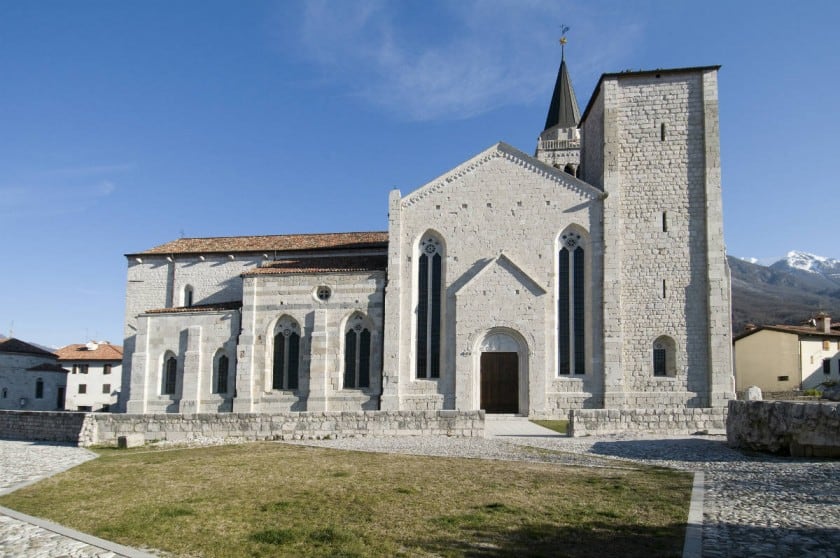 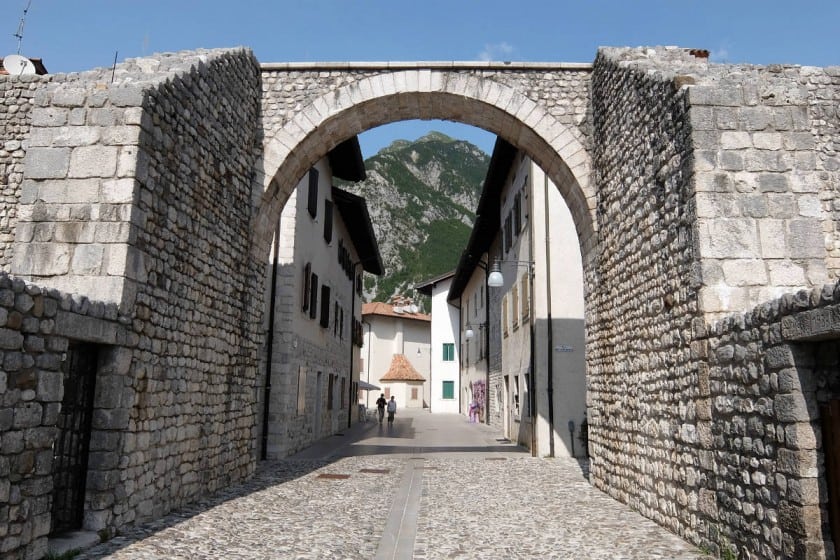 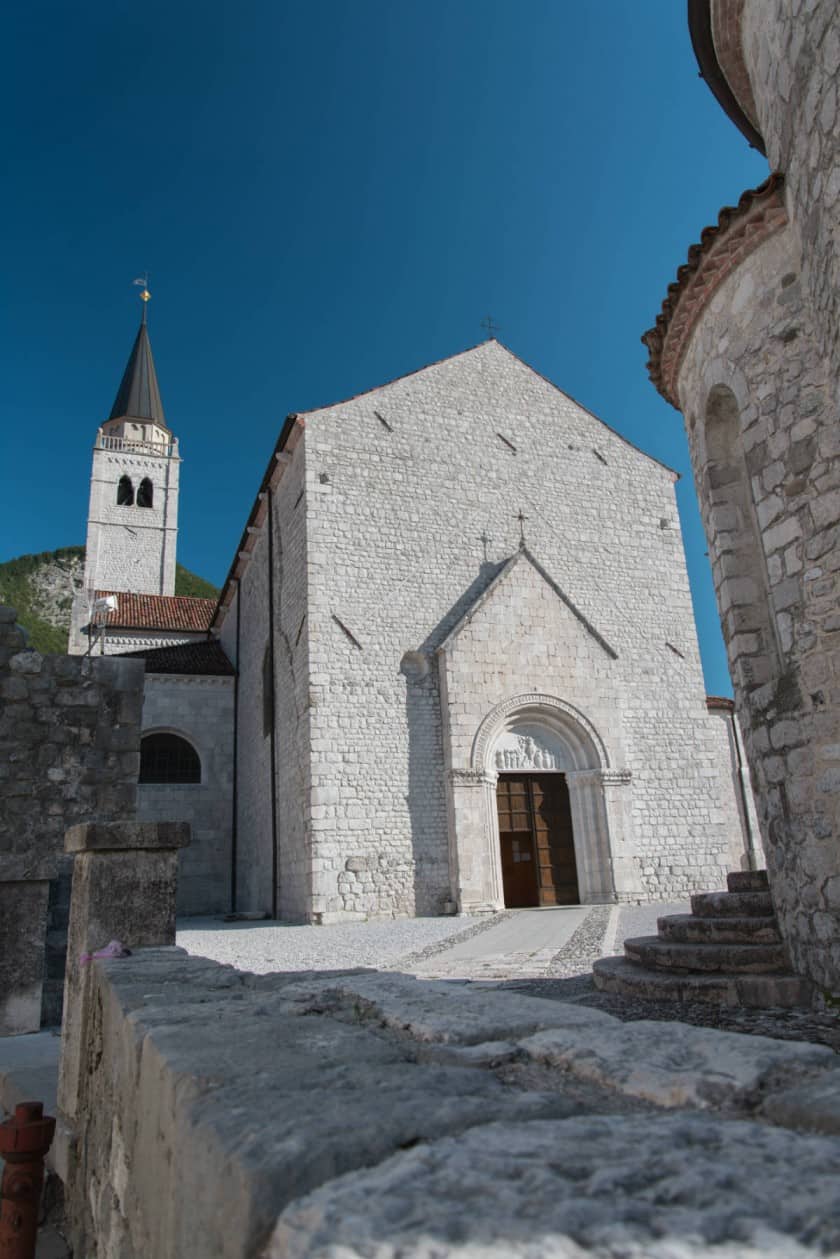 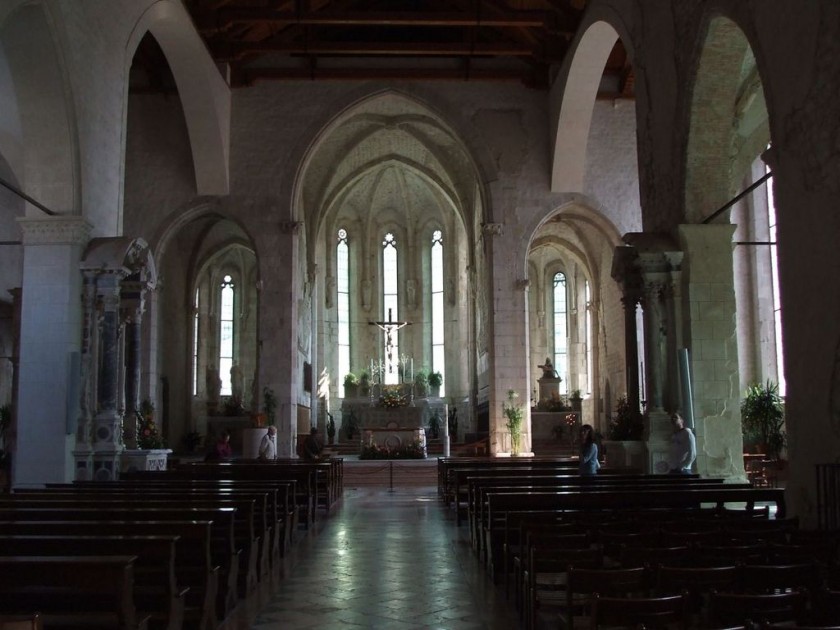 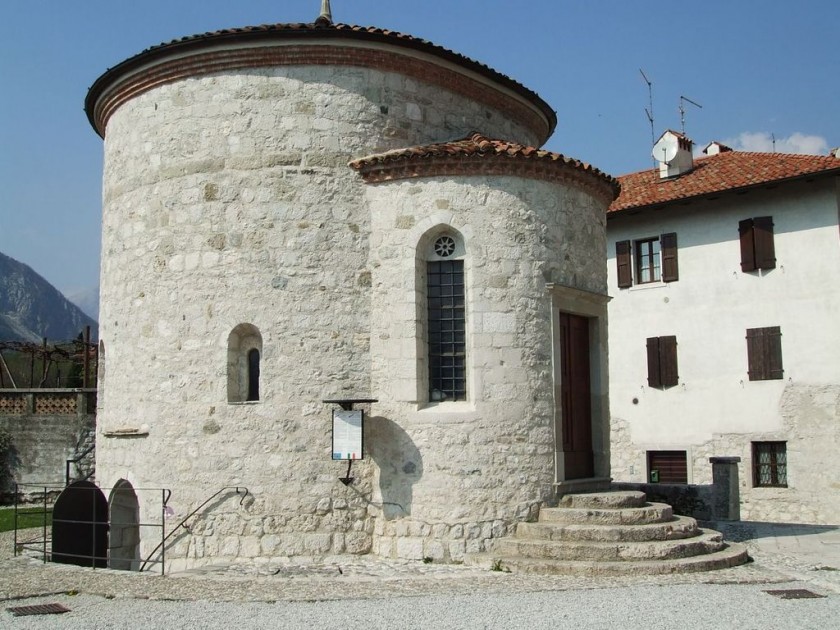 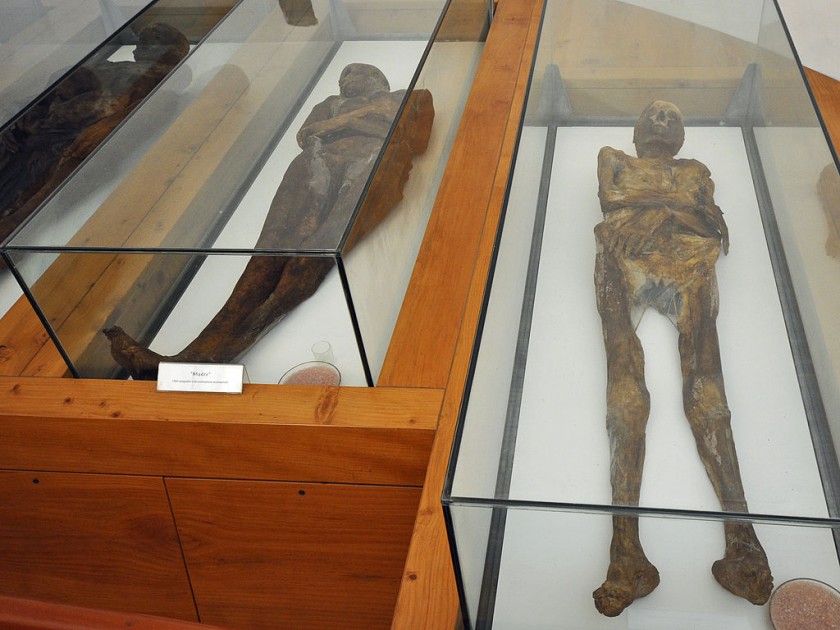 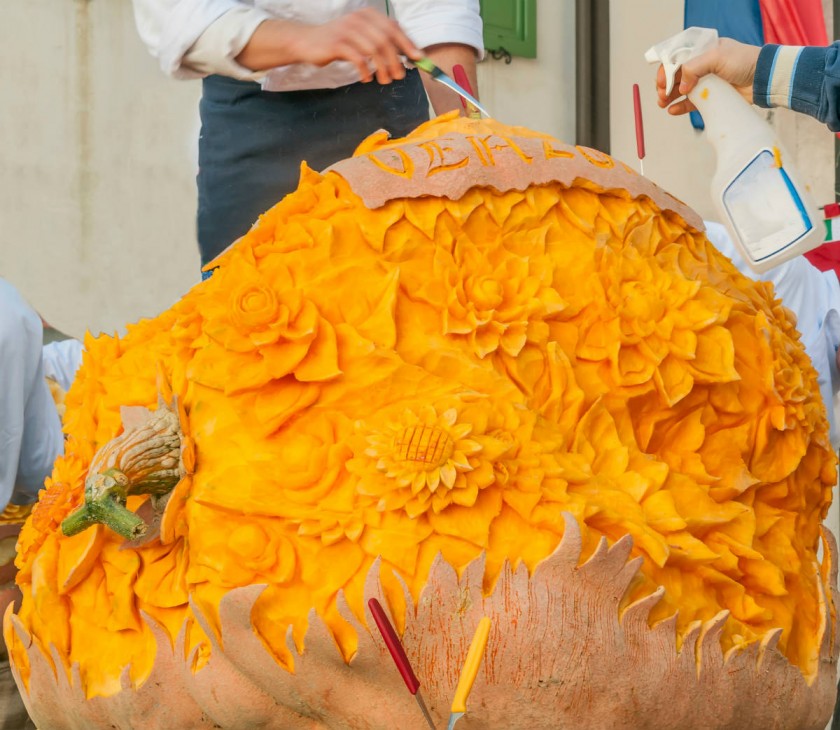 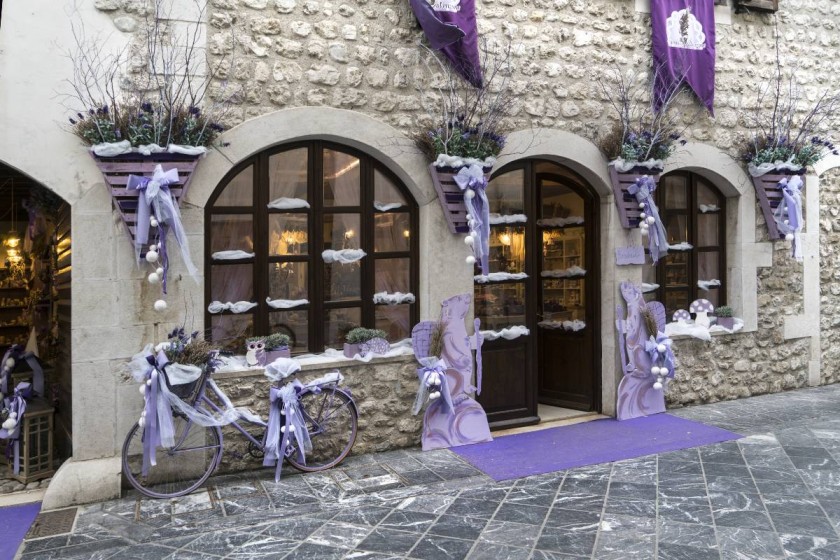 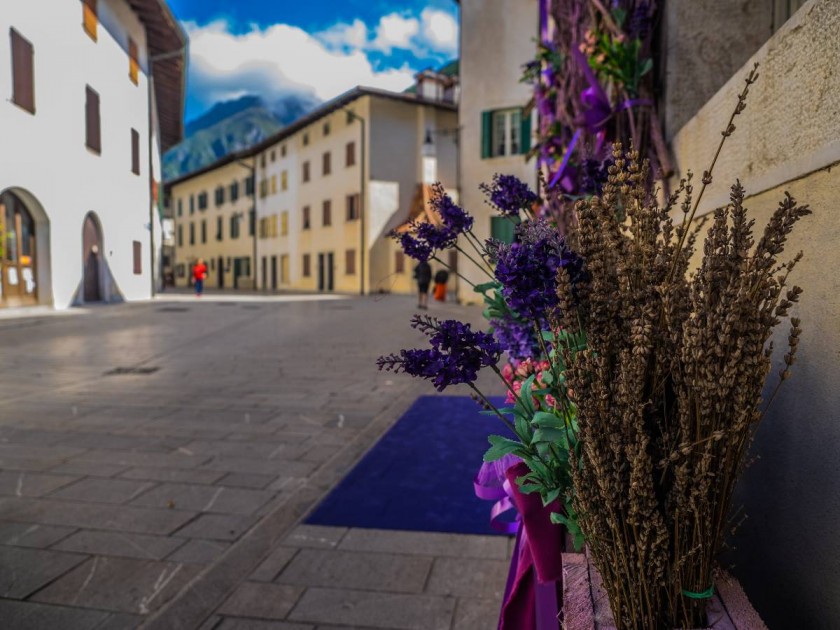 A look at Venzone

The village of Venzone, completely rebuilt as it had in the Middle Ages after the earthquake of 1976, is a real gem fortified among the mountain landscapes of the valleys of the river Tagliamento and the Canal of the iron in Friuli-Venezia Giulia. The town which is partly inside the Natural Park of the Alps Gulie, rises 230 meters in height and is one of the most extraordinary examples of architectural restoration and artistic.

Venzone owes its fortune to the position of obligatory passage toward the north, passage already known by the Celts in 500 B.C. and then made statio by the Romans along the Via Julia Augusta to Austria. The name Venzone is certainly from the torrent Venzonassa and was officially cited for the first time in 1001 in a diploma where the Emperor Otto III granted to the Patriarch of Aquileia The erbatico of the Canal of the iron. The fortifications, hexagonal in plan with a double walled high 8 meters surrounded by a deep moat and a system of 15 towers were built from 1258 by Glizoio of Mels. In the course of the centuries Venzone passed into different hands, by the Austrians to the Republic of Venice, from the Turks to the French, then again the Austrians, until 1866, following the third war of independence, the town became italian. In 1965 the Ministry of Public Education proclaimed Venzone as national monument recognizing the historic-artistic importance also because of the advanced age of most of the buildings that had not suffered any damage during the two world wars. In 1976 Venzone was almost completely razed to the ground during the earthquake that struck the Friuli but thanks to national aid and international and tenacity of its inhabitants was rebuilt by returning to the ancient mediaeval splendor.

Important are the Cathedral of Venzone, dedicated to Saint Andrew the Apostle, erected in 1308; the mummies of Venzone, belonging to an age comprised between the XIV and the XIX century, currently conserved in a building near the Duomo, among which the noble man of Venzone Paul Marpillero; the gates of the walls; the House Marcurele, village's oldest building built in the XI century; the fourteenth-century Palazzo degli Scaligeri and the Palazzo Zinutti, a building of the '700 embellished by an elegant balcony with a parapet in wrought iron and the baroque main door; Casa Calderari (XIV century) by the cozy interior courtyard; the gothic Palazzo Comunale of 1400; Palazzo Radiussi, noble residence characterized by a three-mullioned window in Venetian Gothic style of the fifteenth century and a seventeenth century portal; Palazzo Orgnani Martina, noble palace of the XVIII century is now the seat of the main museums and temporary exhibitions venzonesi; drain Palace and the Church of S. John the Baptist, built in the XIV century, whose ruins testify today the violence of the earthquake of 1976, which spared only the main facade.

Venzone is also a paradise for nature, trekking and mountain bike lovers, thanks to a unique territory and with the vastness of vegetal and animal species that inhabit the Parco Naturale delle Prealpi Giulie. In autumn it is not to be missed is the Pumpkin Feast (fourth weekend of October), a historical commemoration that makes the village back in time to the middle ages. Moreover Venzone was declared "Ideal Village where it is beautiful to live" by the European Community and by AIRONE magazine.

the Municipality is part of:
I Borghi più belli d'Italia
Unione del Gemonese

The Mummies of Venzone
The Mummies of Venzone has been founded in the seventeenth century in Friuli Venezia Giulia.
Cappella cimiteriale di San Michele, Piazzetta Duomo, Venzone
Quadris Naturalistic Oasis
located north-west of the center of Fagagna, the Oasis of Quadris is a Site of Community importan...

Via Caporiacco, Fagagna (Udine)
23.24 Kilometers from Venzone
Parish church of Santa Maria Assunta
In Fagagna, going back up the road that from the area of Quadris leads to the Colle del Castello,...

Via della Pieve, 26, Fagagna (Udine)
24.20 Kilometers from Venzone
Cjase Cocèl Peasant Life Museum
The Cjase Cocèl Museum of Fagagna, housed in an ancient rural house dating back in some of its pa...

Via Don Martino de Crignis, Ravascletto (Udine)
27.17 Kilometers from Venzone
Parish church of Santa Maria Assunta
In Fagagna, going back up the road that from the area of Quadris leads to the Colle del Castello,...

Piazza Duomo, 5, Cividale del Friuli (Udine)
34.92 Kilometers from Venzone
Lagoon Archeological Museum
The Archaeological Museum of the lagoon in Marano Lagunare exposes, in the palace of the Civic Ce...

Via Pontebbana 74/2, frazione Carnia, Venzone
Chalet Rikhelan
The Chalet Rikhelan in Sauris offers an enchanting view and a relaxing stay.

Località Rikhelan - 33020, Sauris (Udine)
38.34 Kilometers from Venzone
Hotel Pa Krhaizar
The Hotel Pa Krhaizar in Sauris is the perfect place to enjoy a great holiday in the Friulian vil...

Vicolo Resia 1/2 - 33033, Codroipo (Udine)
42.55 Kilometers from Venzone
Sauris Trout
ZEA, Sauris' smoked trout is born from the sources of Friuli and its smoking takes place in a loc...

Località La Maina - 33020, Sauris (Udine)
34.70 Kilometers from Venzone
Legnostile Artistic Laboratory
Legnostile is the artistic laboratory that connects the past and present for woodworking but with...

Frazione Sauris di Sopra, 50/D - 33020, Sauris (Udine)
38.14 Kilometers from Venzone
Malga Alta Carnia cheese
Malga della Carnia cheese made from raw milk is one of the products par excellence along with tho...

Our news about Venzone

A walk through the villages with the scent of lavender
Photo by iviaggidiliz.it Our country is home to vast expanses of lavender. The purple, blue and lilac-coloured flower gives shape to fragrant parks, which are the most popular destinations for lavender lovers. A walk through Italian villages and lavender fields is therefore one of the best ways to leave the greyness of winter behind and to welcome spring and its scents with enthusiasm. The purple fields of northern ItalyThe flower is on...
Continue
Castello di Spessa Golf & Wine Resort of Capriva, to discover the villages of Friuli
Cividale del Friuli, Sappada, Venzone: a set of enchanted villages, starting from Cividale, Unesco heritage, passing through Sappada - awarded the orange flag - to get to Venzone, dotted with lavender that colors it with lilac and scented violet brushstrokes. To discover these and many other villages in the region there must be a starting point and then among the locations you must mark the castle of Spessa di Capriva del Friuli, an ...
Continue
Recipe: Jota, the tasty minestrone of the Friulian villages
In the past, the jota was based on essential and protein ingredients: sauerkraut, beans and cornmeal. The only concession to the throat was given by the pestat, a mixture of lard and aromatic herbs. Nowadays this typical cuisine cooked in the villages of Friuli-Venezia Giulia - also present on the tables of the provincial capitals - is served all year round and, depending on the climate, hot, cold or lukewarm, usually accompanied by wine glasses of the Carso that enhance its flavor. The jota also represents the pleasure of meeting and lig...
Continue
Venzone's Golden Pumpkin: The story of a mock turned into recurrence
The Venzone pumpkin feast is a real institution: if you’re in these places, you can’t miss it. We decided to retrace the history of this feast, and we found a legend: the one about the golden pumpkin. In ancient times Venzone Community had to face a critical financial situation, concurrent with the end of the construction of the Cathredal: the monument was without the bell tower. After several meetings, the village opted for an austeri...
Continue
With Trenitalia the villages are closer. The formal collaboration between Ferrovie dello Stato and the Club of the most beautiful villages of Italy.
After a 2017 has seen the growth of 7 per cent travel for tourism on regional trains of Trenitalia, this partnership was born with the aim of enhancing the great heritage of history, art, culture, environment and traditions present in the small centers of Italy reachable with the means of a transport more ecological, convenient, safe and, thanks also to the arrival of new trains, increasingly comfortable. Apart from the exchange of visibility on the channels of communication of the two realities, the agreemen...
Continue
The Village of Villages for a Venzone all to discover
Culture, craftsmanship, food and wine and entertainment: this is what you can find in the Friulian town of Venzone on Sunday, August 27th from 10 a.m. to 7 p.m. Strolling through the main streets of the village you can admire the beauty of its artistic heritage, stopping from time to time to taste fine wines and tasty local products, offered by farms, wineries, as well as chefs of the area. But it is not over here, to entertain children and adults there will be also a lot of music and animation. Here is the program of the event:
Continue
Venzone, in the region of Friuli-Venezia Giulia, is the most beautiful Italian village of 2017
Among the twenty villages that were competing for the nomination of Borgo dei Borghi (most beautiful Italian village) of 2017, a survey promoted by the TV program Alle falde del Kilimangiaro of the channel Rai 3, the winner is Venzone, a village of rare beauty in the province of Udine. This village was recreated entirely a...
Continue