Share
In the Sulcis archipelago, on the Island of San Pietro stands Carloforte, of Ligurian origin, one of the most enchanting island villages. The village, in fact, experiences twinning celebrations with Pegli every year. The result of an overlap of Ligurian-African-Sardinian food culture, it takes its name from the Tunisian island of Tabarca, whose cuisine is mainly influenced by Ligurian cuisine. But the real star of the Carlofortina gastronomy is tuna. 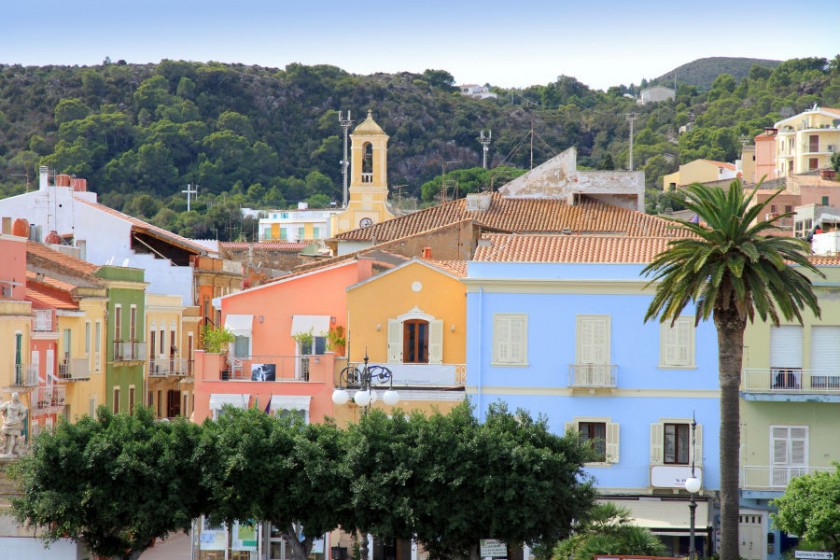 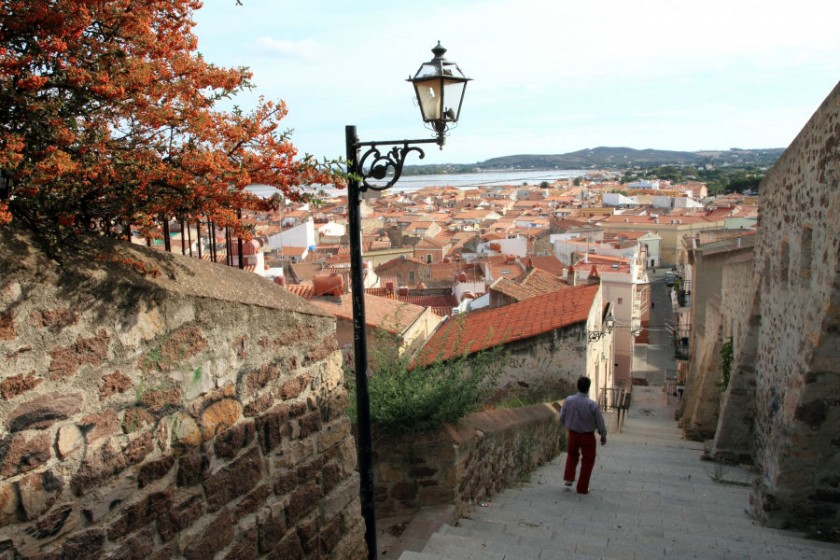 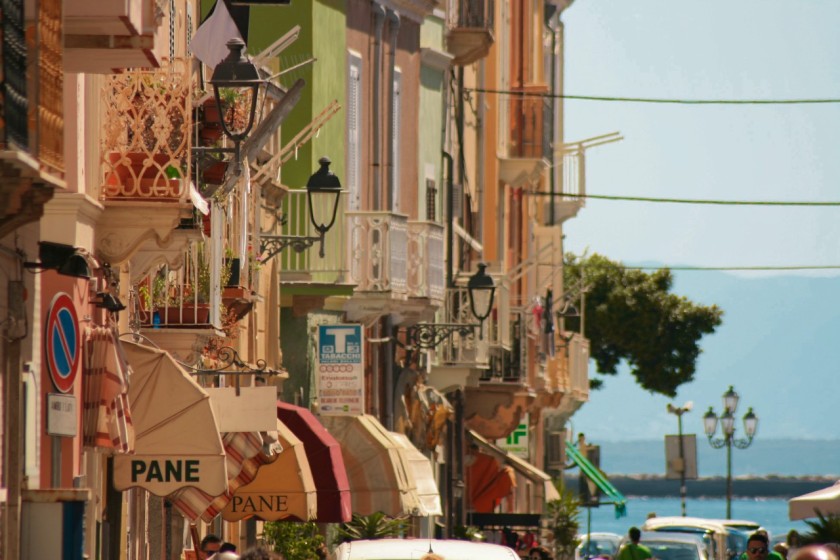 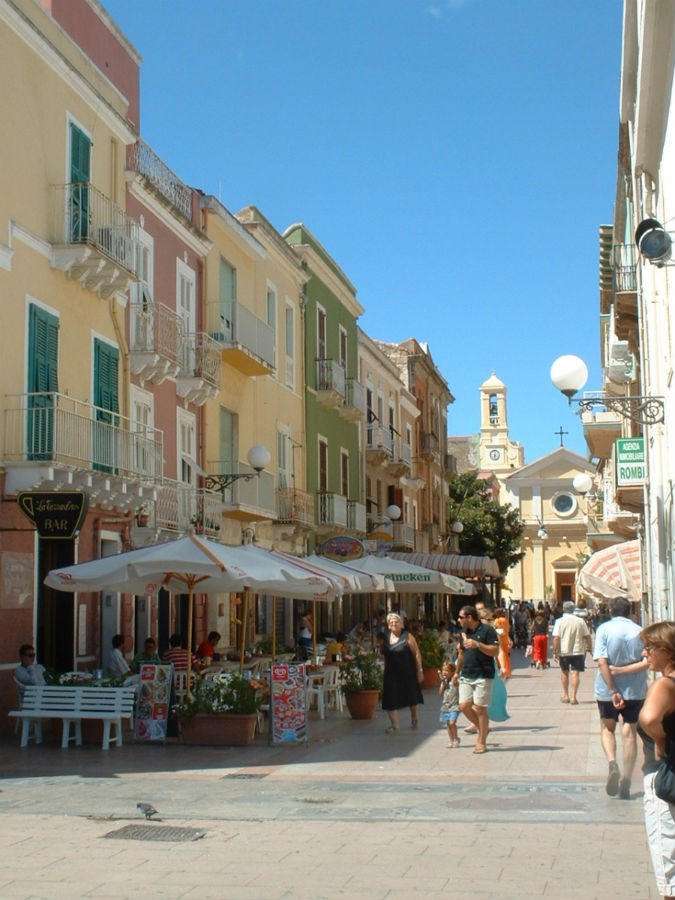 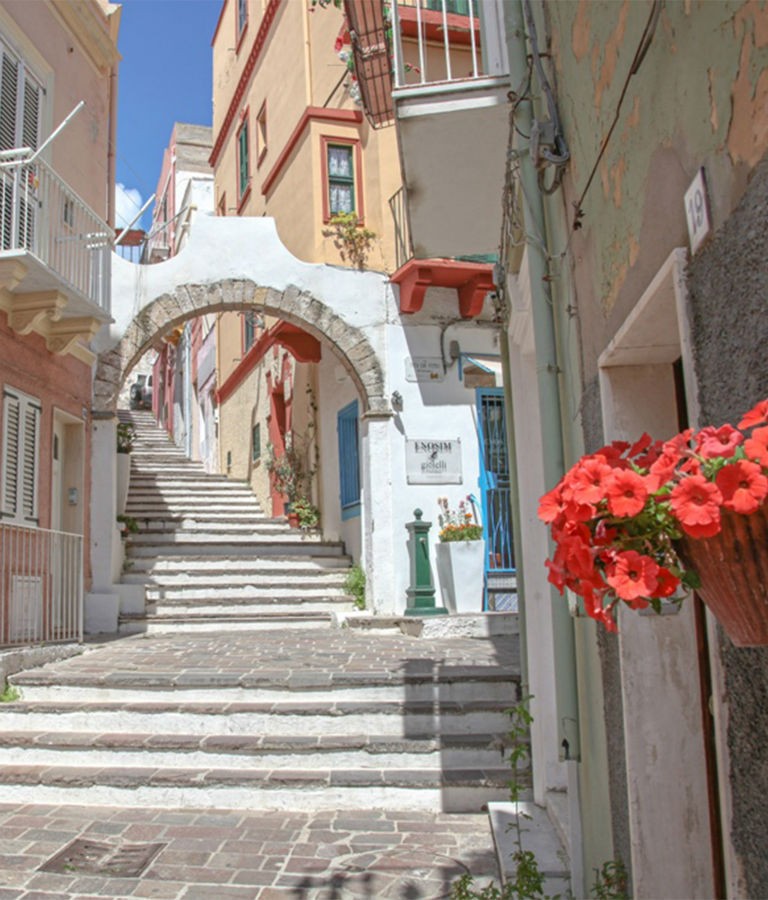 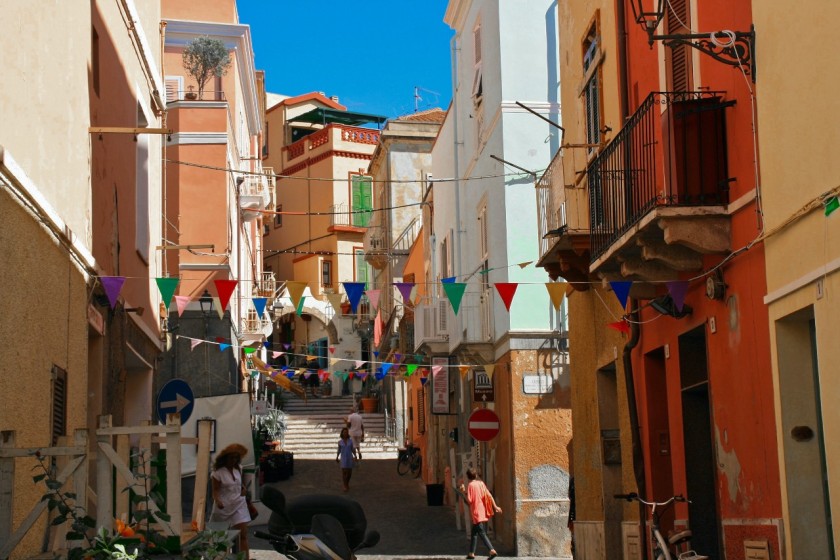 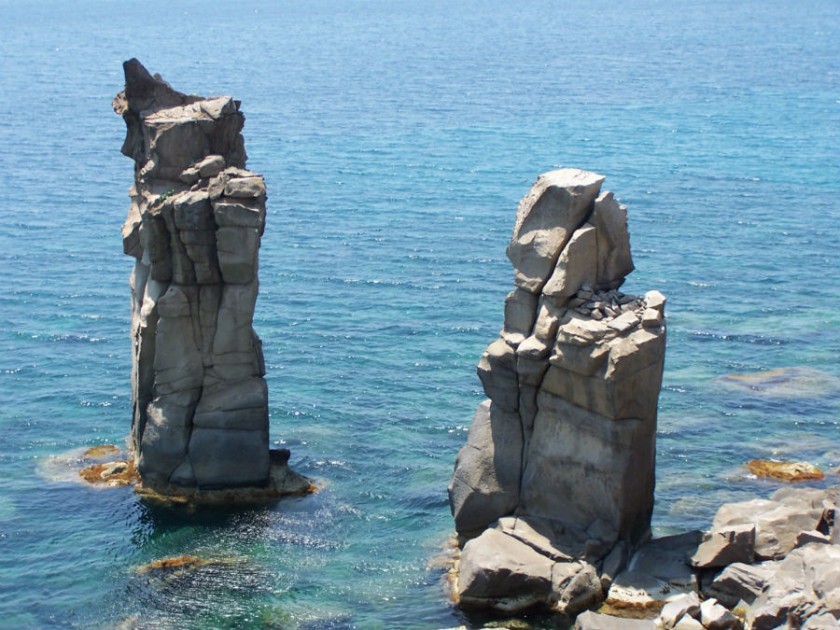 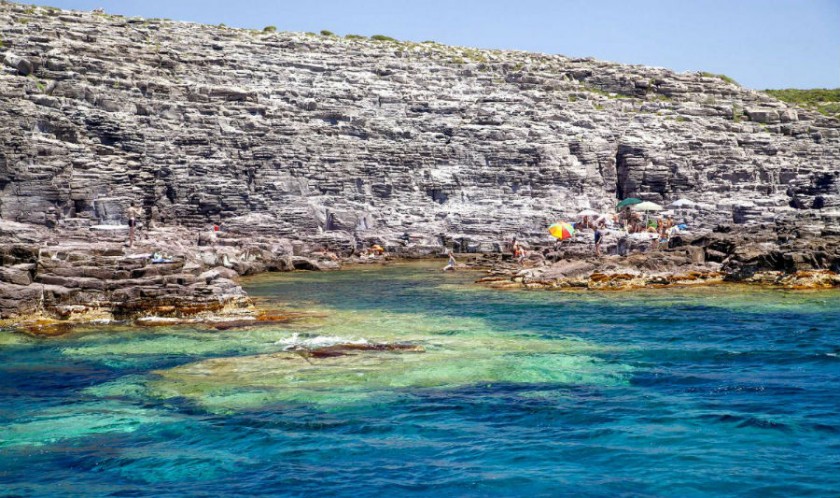 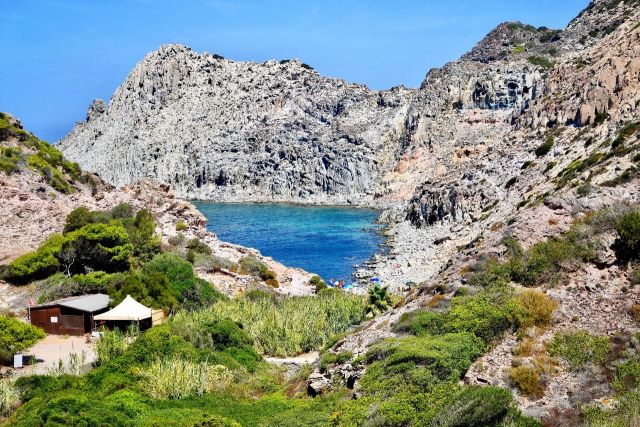 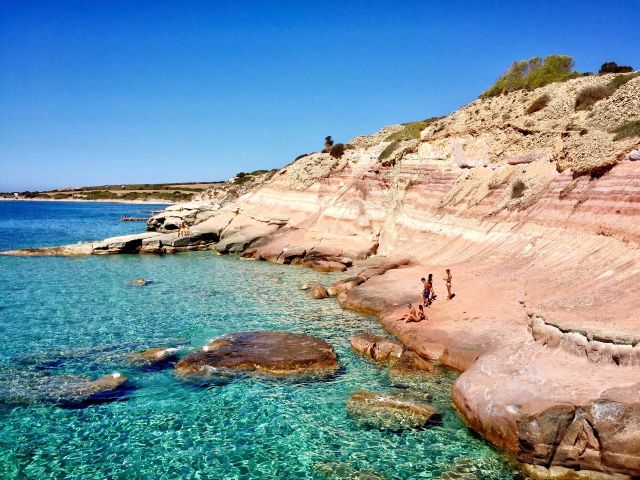 A look on Carloforte

Carloforte (U Pàize, or "The village" in Ligurian tabarchino, Carluforti in Sardinian Campidanese) is located on the Island of San Pietro in Sardinia. The island is located about 10 km from the Sardinian coast and, together with the nearby island of Sant'Antioco and with other islets and rocks, forms the Sulcis Archipelago. The island of St. Peter was frequented by man since the Prenurig and Nuraghic period as witnessed by the presence of domus de janas and nuraghi. Around the 8th century BC the Phoenicians built a stable settlement, Inosim (Sparrow Island), with a port, near today's Tower of San Vittorio. The island was later occupied by the punicists; their settlement with remains of fortifications, a temple and a necropolis has been identified in the north of today's inhabited Carloforte.

Carloforte is a Ligurian linguistic island since the island of San Pietro was colonized, after centuries of abandonment, in 1738 by Pegliese from Tabarka, island today connected to the Tunisian coast. The inhabitants of Carloforte still retain the dialect of their Ligurian ancestors, which, for the common passage to the Tunisian island of Tabarka, is called tabarch. The inhabitants of Carloforte are called carlofortini or carolini; talking about themselves, in terms of ethnicity, are called tabarchines.

Its inhabitants started in 1542 from Pegli, coming from Pegli himself and from the neighboring countries of the Ligurian Riviera, and following the Lomellini, a conspicuous Genoese family dedicated to the trades that had had territorial concessions in those places, settled on the Tunisian coast in the island of Tabarka near Tunis, where they hired coral and engaged in trade and trade until 1738; came for this purpose "tabarchins". In 1738 a part of the tabarchins, headed by Agostino Tagliafico, asked King Carlo Emanuele III of Savoy to colonize, near Sardinia, the island of the Sparrows (Accipitrum Insula) then deserted and today called St. Peter's Island; in the last few years, Tabarka had dropped the coral, and their political and commercial misadventures continued with the various rais governments in the territories of North Africa; the Lomellini's concession had become less profitable, and the disagreements with rays that made them free or vice versa made them slaves depending on who ruled in Tunis or Algiers at that time. For this reason, tired of these harassment, they asked the Sardinian king a place to continue their trade, especially in spices and fine fabrics, with the rest of the Mediterranean. Sparvieri Island was chosen, through regular infidelity.

The earliest periods of colonization were severe because of the presence of unhealthy areas, resulting in real epidemics that decimated the population; Following the land reclamation, the colony managed to improve its conditions and prosper, supported by the arrival of other settlers from Tabarka, and a group of families coming directly from Liguria. A large swampy area near the village was saline, which turned out to be very profitable. A second settlement of settlers from Tabarka was in 1770 in the nearby island of Sant'Antioco, on the side facing the island of San Pietro, where the town of Calasetta was founded.

Carloforte lives every year twinning celebrations with Pegli. Carloforte's architecture, culture, customs and uses are also strictly Ligurian. The Caroline population carries with it several characters of art, culture, politics, weapons, arts and crafts since 1738 to pass through the Savoy era to the present day. Part of the population is dispersed in different cities all over the world, especially in port, not only by necessity but by maritime vocation, and many return from old to the home country. To date there are still strong links between the relations between Carloforte and the families spread throughout the Ligure, and some that remained in North Africa (until the 1950s). Today there are countless places where there are small communities of Carolini residents, to name but a few in Sardinia and in peninsular Italy, in the USA, France, Germany, Spain, Morocco, Tunisia, Argentina, Australia, Uruguay, Peru, Chile, Gibraltar, Buenos Aires Boca and Bonifacio in Corsica. Although Ligurian culture and language, the specific characteristics of tabarchins, while remaining understandable to the other Ligurians of other regions, are recognized as well distinguishable by their peculiarities.

The fruit of an overlapping Ligurian-African-Sardinian food culture, draws its name from the Tunisian island of Tabarca, which saw in 1542 the establishment of a coral fishermen colony from Liguria (in particular from Pegli ). When the coral reefs became impoverished, relations with Arab populations deteriorated. In 1738, the first nucleus of tabarchins moved away; in Sardinia, at the invitation of Carlo Emanuele III of Savoy, and disembark & ​​ograve; on the island of St. Peter, then uninhabited, where fond & ograve; a new municipality Carloforte. In addition to coral, these overseas Ligurians have learned to work tuna.

The cuisine of tabarchina & egrave; mainly influenced by Ligurian cuisine: and among all, the pestu , which seals various types of pasta represented, such as curses or trophies. The bond with the land of origin also maintained by fugasse, panissa and fainò. Other characteristic features are cassolla (fish soup), cappunadda (caponata tabarchina), bobba (dried bean soup) and the purpu accummudau cue patatte (octopus with potatoes).

But the real protagonist of the Carlofortina gastronomy, & egrave; undoubtedly the tuna, of which you eat almost everything like the gurezi (tuna esophagus) and u belu (tuna stomach), the musciame (the meat fillet), the figatellu (rare lettuce or semen), the buzzonaglia (meat close to the bone) and are also eatable u barbasallu (slip), a strinca (lace) and u fruntale (front). There is also the recipe for the roasted tuna on tabarkina style which, by a notarial deed by the Cagliari Academy delegation, has entered in full title among the dishes of the carlofortin gastronomic tradition.

Find where to sleep in Carloforte

Carloforte Sail Charter
A young company, with main base in Carloforte in the Island of San Pietro, able to organize your ...

Feast of Our Lady of the Slave

Our news about Carloforte

Discovering Sardinia with the 100 Towers Walk
Visiting 105 towers scattered across 88 Sardinian municipalities: this is the aim of the 'Cammino delle 100 Torri, in Sardegna', a slow route that takes visitors to some of the most beautiful places on the big blue island in about 60 days. The itinerary crosses 450 kilometres of beaches and endless expanses of sea that are lost in the horizon of spectacular panoramas, sunsets with spectacular colours and pieces of Italian history that show the...
Continue
4 seaside villages to visit in winter
Silence and atmosphere, steps echoing in the alleys, in the little squares, in the open spaces that open onto chests of history. On the seafront, meanwhile, the song of the surf becomes the soundtrack of a stay in the seaside villages when winter is the protagonist. We offer 4, to savor the rare taste of emotion. Dolceacqua (Liguria) The ruby red of the Rossese di Dolceacqua was the first DOC wine of Liguria while from the surrounding...
Continue
Discovering 7 villages in Sardinia choosing the right ferry
Summer is almost upon us and the desire for holidays is increasingly felt. Among the most popular destinations in Italy, Sardinia offers innumerable tourist solutions, among which, of course, the Sardinian villages, which with their traditions, cultures and typicality, are the spearhead of a slow tourism, sought and absolutely surprising. Reaching these little jewels furrowing the seas of the Tyrrhenian coast of our boot represents an experie...
Continue
Recipe: Carlofortina tuna
Carloforte's cuisine is a cuisine influenced by different food and wine traditions that have intertwined over time and have been preserved by the Tabarkini refugees adapting them to the new food resources they found on the island.But the real protagonist of this splendid seaside resort is tuna, which is caught in the local tuna traps and consumed in all possible variations with taste and simplicity.Let's see a way to prepare it. Ingredients
Continue
Recipe: Mirto, sips of well-being from the villages of Sardinia
"One enjoys one drinks as much as one's thirst". Thus wrote the great Italian poet Dante Alighieri (1265-1321) in the 20th canto of Purgatory of his universally known Divine Comedy. In the same period, "spirit" drinks began their unstoppable journey towards popularity. The elixir of Sardinia is the Mirto (myrtle), a liqueur with an alcohol content of 30-35 degrees obtained by cold hydroalcoholic infusion or dark purple berries or leaves: with the first one obtains the red myrtle, with the second the white myrtle is there. Both delicious w...
Continue
Carloforte: a village to see live, not only on TV
For the "affictionadi" (fictional lovers) it is no longer the Island of San Pietro, but simply L'Isola di Pietro. And perhaps, thanks to the successful Canale 5 television series, the islet located in the south-western part of Sardinia (one of the less touristy areas, but no less suggestive of the region) has regained the notoriety that it deserves a priori. You say: did we need a TV program to let everyone know about such a beautiful place?
Continue
The Legend of the unfaithful beauty from Carloforte
On the island of San Pietro, north of the Gulf of Palmas (Sardinia), in the village of Carloforte there was a tavern...
Continue
Some events in the villages not to be missed in the post-Covid-19 era
The villages open their doors to visitors in the Covid-19 era. This means that, in compliance with health regulations, the villages once again present themselves as a place of meeting, exchange and enrichment for everyone. The next events on the calendar are the most varied, in fact there are food and wine festivals, historical re-enactments, but also exhibitions and markets, to testify a liveliness and cultural plurality that has always been the driving force of our country.
Continue