Share
Set in the splendid scenery of the Iblei mountains, the picturesque village of Palazzolo Acreide shows itself as a treasure chest to be discovered that is characterized by the singularity of its urban structure, full of testimonies from different eras. Inserted in the list of UNESCO World Heritage Sites, Palazzolo is an ideal destination for trips out of town or for those who want to visit a place suspended in time, away from mass tourism. 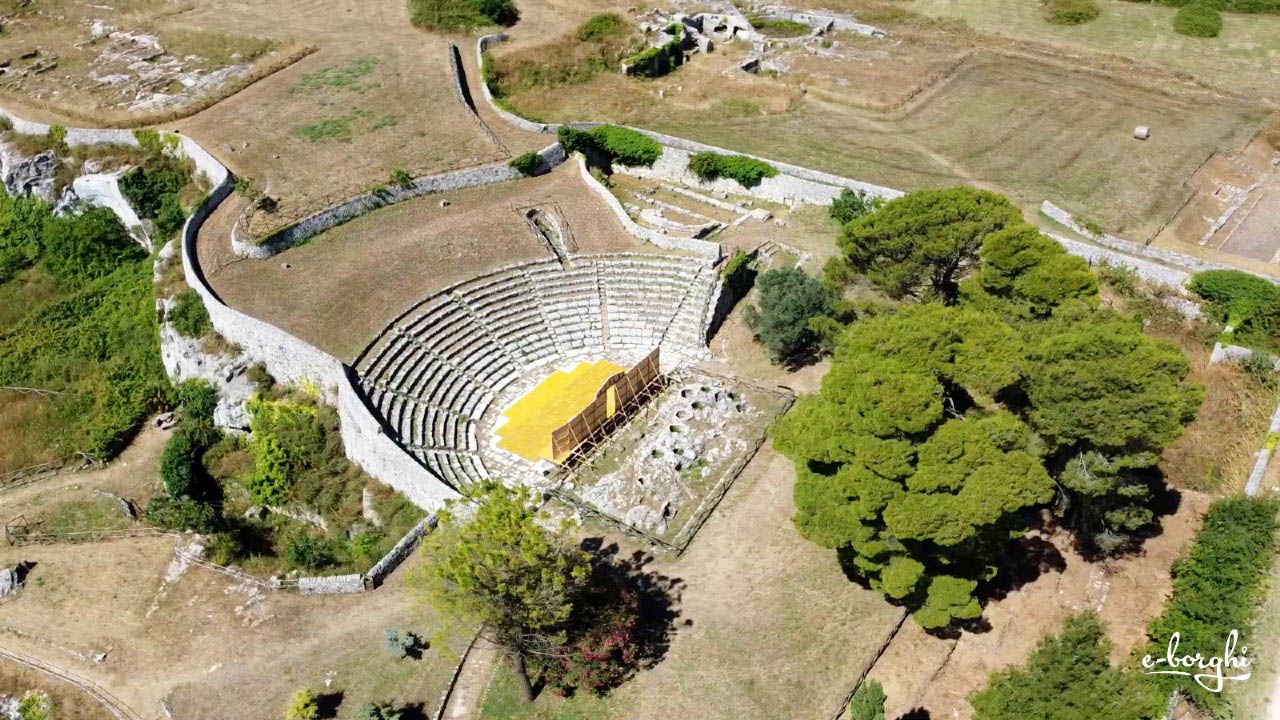 A journey where folklore, tradition, craftsmanship and food and wine are the excellences that will g... 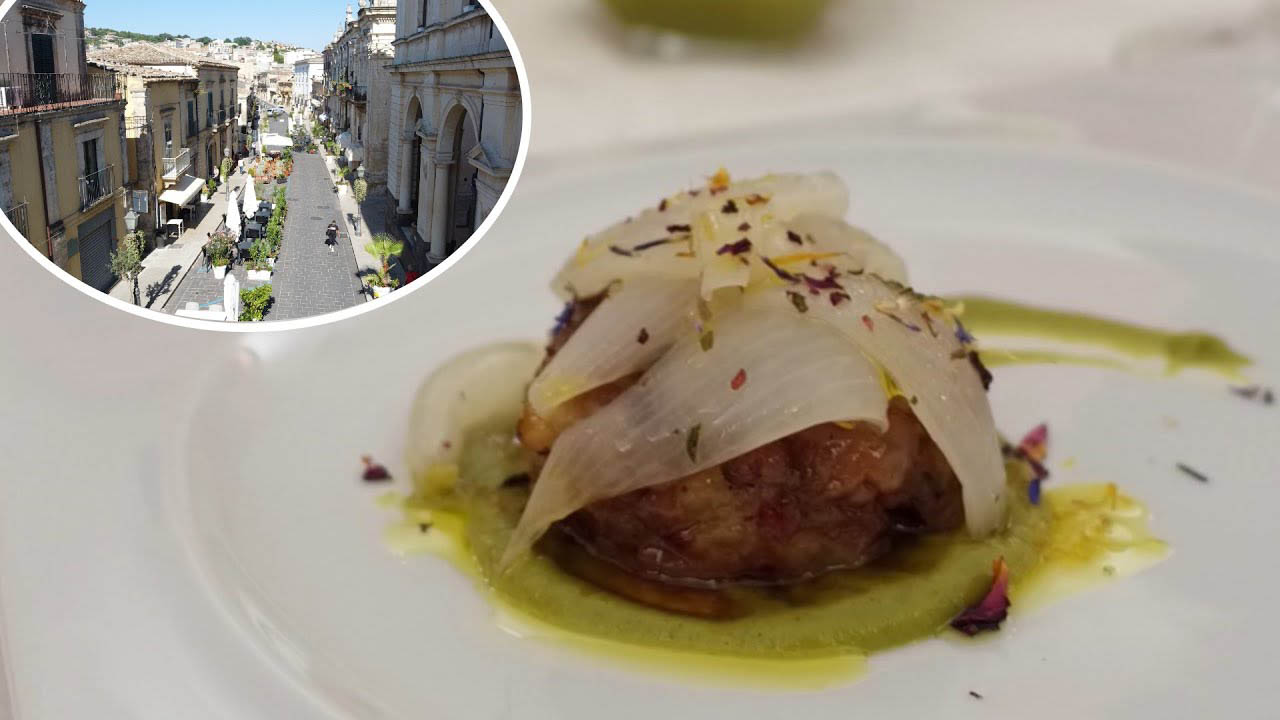 Listed among the most beautiful villages in Italy, Palazzolo Acreide is also a World Heritage Site, ... 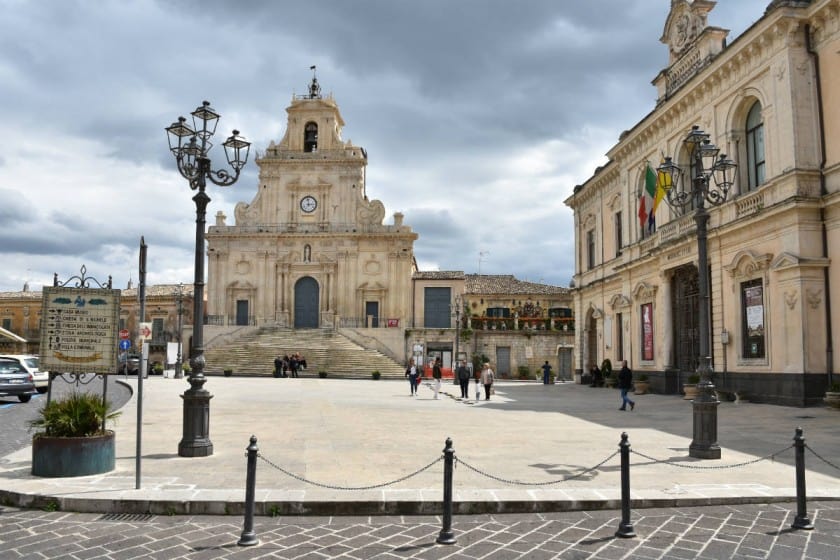 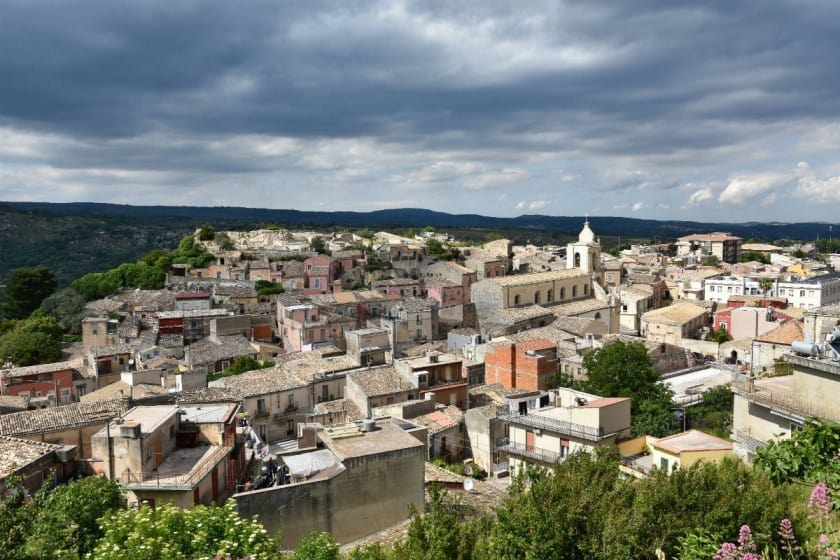 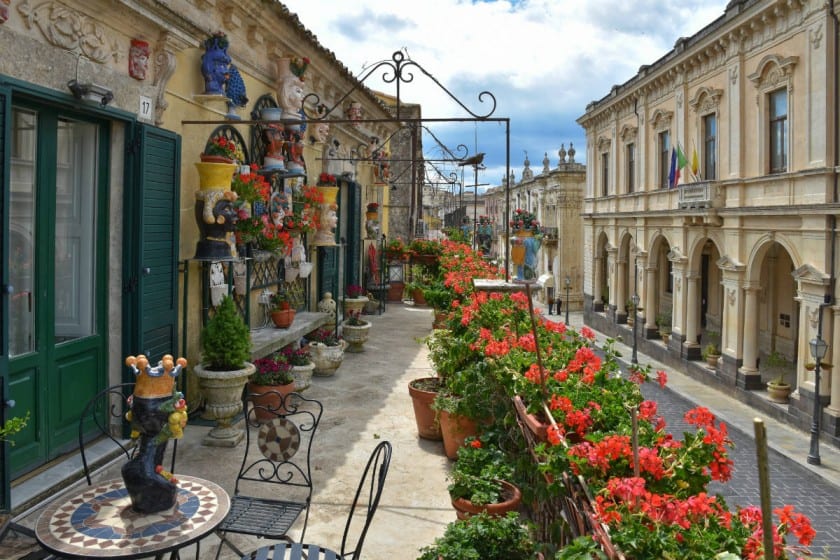 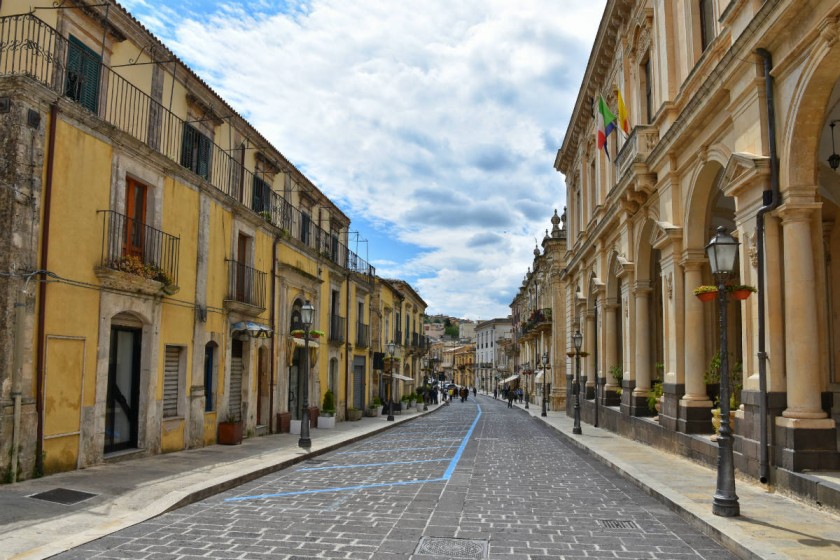 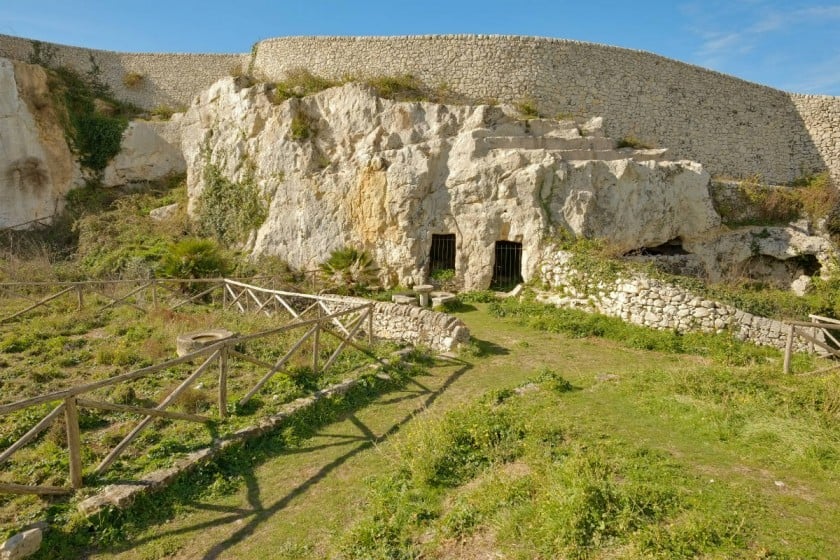 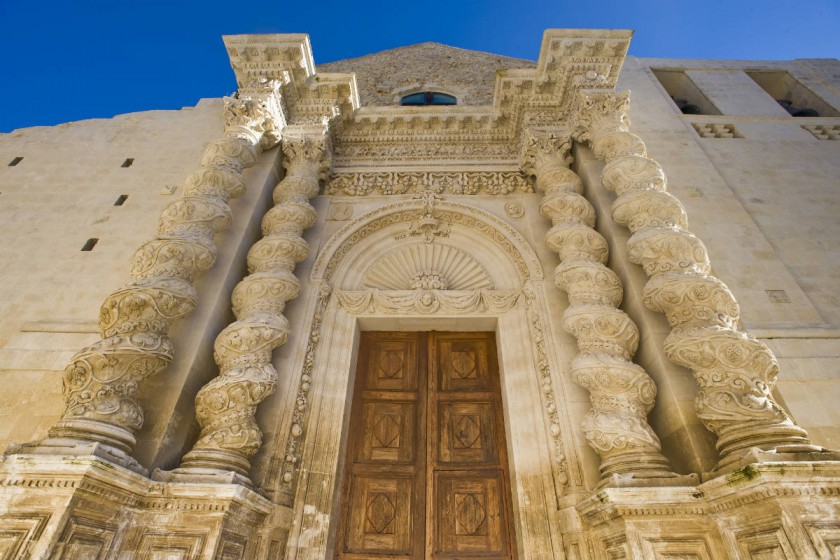 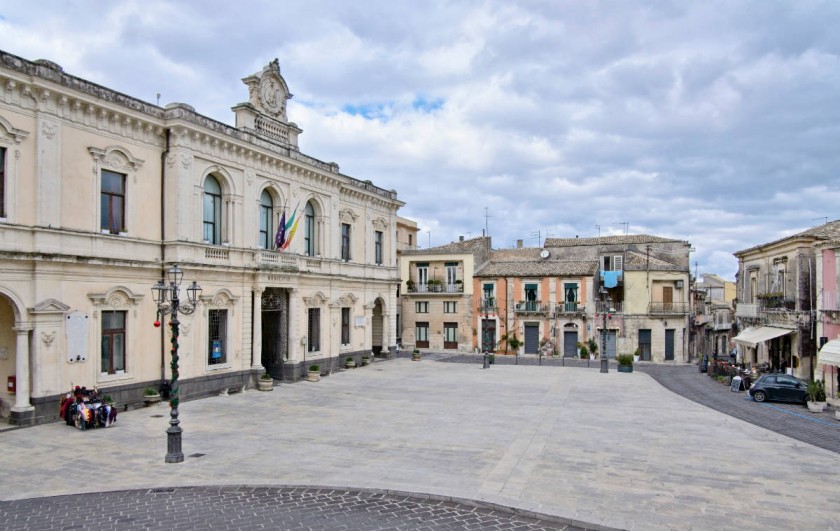 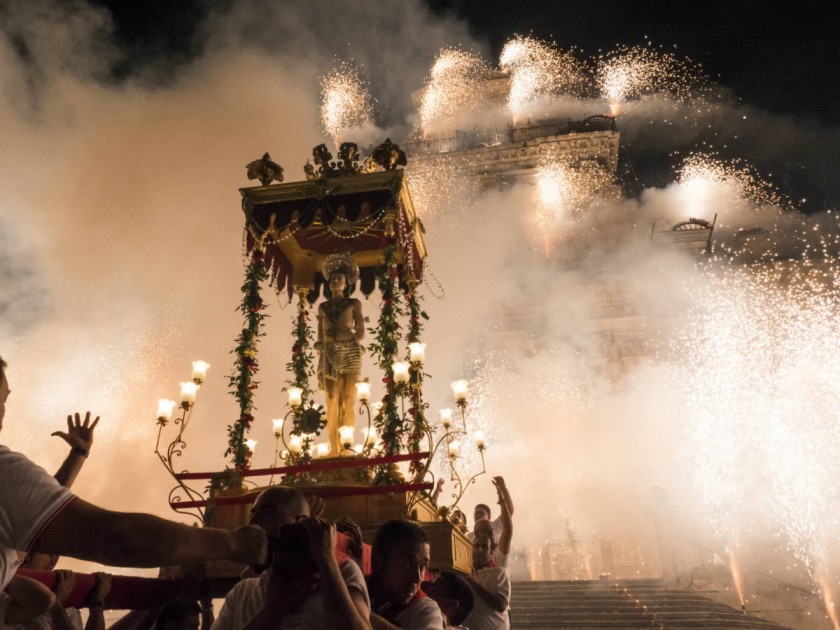 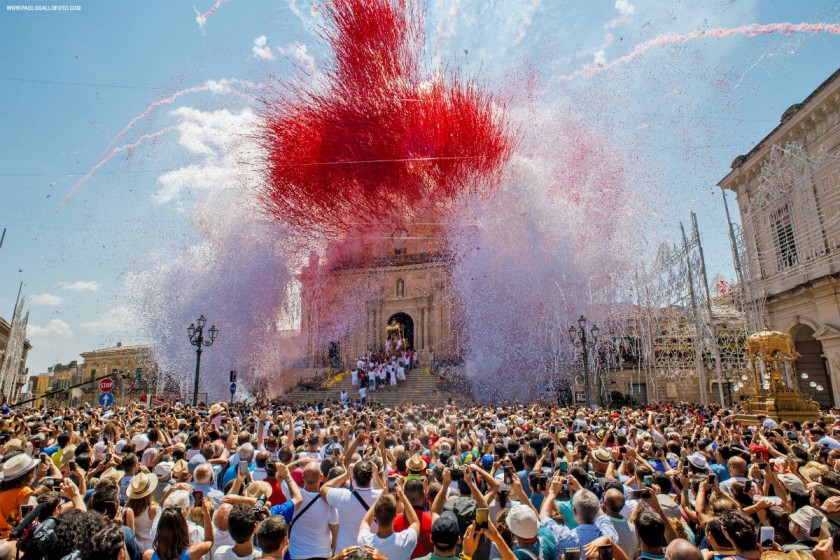 In 664 a.C., on the hill called Acremonte, which separates the valleys of’Anapo and of Tellaro, the Syracusans founded Akrai. This place even before being appreciated by the Syracusans was chosen by the Siculians, you raised a real village around the XII century numerous were the dominations that were avvicendarono over the centuries: Greek, Roman, Byzantine, Arab, Norman. From here the various names given to the cityà in different eras: Akrai, Balansùl, Placeolum or Palatioli, and finally Palazzolo to which, in 1862, was added the patronymic of Acreide.

The first historical news of Palazzolo Acreide current you have from the XII century. The medieval center was erected close to the ancient Acre, on a small rocky outcrop below, in a strategic position of control over the territory and the roads, Là where once stood a "palatium" imperial, which has given the name of the new village: "Palatiolum". Here a castle was erected by the Normans. From 1104 it avvicendarono in Palazzolo different baronie: from Guilfredo son of Count Ruggero to Artale d'Alagona, to finish the principles Ruffo di Calabria. In the XIII-XIV century the demographic increase determinationò expansion of the town in the surrounding area. Destroyed by the earthquake of 1693, the cityà it was rebuilt in part on the original structures of the medieval quarter and in  part around the actual main course. In the XVII century the palazzolesi rebelled to feudalism until in 1812 Palazzolo was recognized as a country demaniale. The Iblei Mountains and the valley of’Anapo are natural and evocative setting to the territory of Palazzolo Acreide.

The valley, crossed by the river of the same name, a rich vegetation with spots of shrubs and oriental platani, preserves the natural reserve and the necropolis of Pantalica. They deserve to be mentioned also the quarries of Cardinal and the forest of Bauly, interesting for flora and fauna. The baroque, climate, popular traditions, gastronomy, cordialityà and L’hospitalityà people make this town, a methà not to miss. Palazzolo è a village not only to visit but to live for the history and charm, for the many beauties by love, for its churches, for its palaces and its evocative districts.

The church of San Michele was built between the XV and XVI and rebuilt after the earthquake in 1693, the facade rises on a staircase and develops on two orders. Stands out left the bell tower hexagonal enclosed by a dome.The internal is divided into three naves with columns of white stone to smooth drum surmounted by Corinthian capitals.

The church of Sant’Antonio Abate was built in 1634, destroyed by the earthquake of 1693 è was rebuilt in ‘700, but it's never been completed. The facade è incomplete: lacks the second bell tower, while it was built only the central nave and a part of the right aisle. You can admire several beautiful canvases in the altars.

The church of Immaculate, from’elegant baroque facade convex, unique in its kind in Palazzolo, preserves a statue in white Carrara marble of the Madonna col Bambino, a Renaissance masterpiece built between 1471 and 1472 by the sculptor Dalmata Francesco Laurana.

The church of S. Francesco è L’ancient church of the Capuchins. Rebuilt after the earthquake of 1693, has been reopened for worship in 1984. In its interior, with a single nave, is guarded a wooden altar with the statues of Capuchin saints and the statue of S. Francis.

The construction of Church Convent began in 1870, the complex and the ancient monastery was suppressed in 1866. The Church è a single nave, in the sacristy is guarded a valuable eighteenth-century cabinet in walnut-tree with inlays in cypress tree that was found in the old convent. The church also holds the manuscript “La Selva of historical news” Father Giacinto Farina.

The church of Maria SS. Del Soccorso è devoid of works and decorations, but has a charm austere. Rebuilt after the earthquake of 1693, recently reopened for worship. Of the original structure, remain a precious holy water stoup in marble and stone floors paved.

The Palazzo Lombardo Cafici is located along via Garibaldi, dates back to the XVIII century and boasts the mostù long baroque balcony of the world. The corbels depict anthropomorphic mascheroni with vivid expressions grotesque.

The Museum of travellers in Sicily collects at Palazzo Vaccaro the original engravings, concerning’iblea area, of più important Voyage Pittoresque ‘700, ancient maps of Sicily and a valuable collection of ancient books related to the theme of the journey including the rare first edition of De Rebus Siculis of Fazello. The Palazzo Rizzarelli Spadaro is the seat of the Museum of the noble traditions.

on vast Piazzale Marconi is located the Villa Comunale, desired and realized by the barons Judica and Messina, its construction beginningò in 1880. Inserted between the historical gardens of Italy by the Ministry for Cultural Heritage, has an extension of 30,000 sqm. And è a veritable botanic garden for the variety of trees and flower essences. It's characterized by four spacious long boulevards lined by secular ornamental trees, some of which are very rare.

The Castle Medieval existed GIà In’827, the year of the muslim conquest, abandoned after the earthquake of 1693, remain only some ruins: part of the ditch, the base of the towers, some local hypogea, tanks and in baglio small part of crenellations carved in the living rock. From the site, you can enjoy a view over the valley of’Anapo of unparalleling beauty.

The district “i scaliddi” has its name because of a series of stairs, diramatesi in different directions and then rejoin, puts into communication the districts of “San Paolo” and the “The Holy Spirit”, that are located in the “Low” the cityà with those of “San Michele”,’ “Clock” and “San Sebastiano” which are in the “High” the city. The stairways, some very evocative, overlook the beautiful valley of’Anapo, from here you canò enjoy a vast panorama that extends up to’Etna. This district is one of the most ancient and currently valued only on the occasion of the “Living Crib”, in the month of December.

Via Nino Bixio, 102, Giarratana (Ragusa)
10.04 Kilometers from Palazzolo Acreide
Rocky Necropolis of Pantalica
Pantalica is a naturalistic-archaeological locality not far from the village of Ferla, in Sicily.

Via Gioberti, 5, Sortino (Siracusa)
15.24 Kilometers from Palazzolo Acreide
Medieval Antiquarium
The antiquarium of Sortino is located inside the former convent of the Carmelite Fathers of Santa...

Via Carmine, 1/3, Sortino (Siracusa)
15.40 Kilometers from Palazzolo Acreide
Rocky Necropolis of Pantalica
Pantalica is a naturalistic-archaeological locality not far from the village of Ferla, in Sicily.

Strada Regionale 11, Sortino (Siracusa)
12.95 Kilometers from Palazzolo Acreide
Diana's Fountain
The Diana's Fountain is located in the village of Ortigia, in Sicily.

Piazza Regina Margherita, 11, Pachino (Siracusa)
40.43 Kilometers from Palazzolo Acreide
Apollonion
The Apollonion is one of the most important monuments of Ortigia, in Sicily.

Via dell'Apollonion, 19, Siracusa (Siracusa)
34.51 Kilometers from Palazzolo Acreide
Medieval Antiquarium
The antiquarium of Sortino is located inside the former convent of the Carmelite Fathers of Santa...

Via Carmine, 1/3, Sortino (Siracusa)
15.40 Kilometers from Palazzolo Acreide
= distances as the crow flies

Find where to sleep in Palazzolo Acreide

The Carnival of Palazzolo Acreide

Feast of San Michele Arcangelo and Festival of young voices

Our news about Palazzolo Acreide

Sicily, a journey through villages and southern icons - part 1
In the south of Sicily the horizon line always intercepts Hellenistic, Arab and other populations that have lived on the island. But the landscape is not crowded or chaotic, nature lightens the scenic scene while the sea illuminates the view with the glare of the sun on the waves. An ancient history, that of southern Sicily, from the obligatory passage, to learn more about the present enriching the culture with the knowledge of the past. And ...
Continue
Video: Palazzolo Acreide sausage meatball on Arancia di Ribera DOP pesto, stabilised orange, onion shoots and rosemary flowers
Palazzolo Acreide is a beautiful Syracuse village with a baroque soul. Greek and Roman occupations have left a visible imprint on the architecture but also on the culinary traditions.The roots of the preparation of sausage date back to the arrival of the Romans, who always brought pigs and sheep along on their journeys in order to always have meat and milk, essential for subsistence. Each family in Palazzolo A. therefore started to raise one or two black pigs, which soon became an important resource for everyone. The inhabitants sha...
Continue
Recipe: Fennel balls from Palazzolo Acreide
ALSO FOR VEGETERIANS Belonging to the Sicily’s culinary tradition, the fennel balls are a perfect appetizer or a delicious second course. Easy and quick to prepare, the few ingredients required will give birth to an extremely tasty dish. If you still have doubts, follow our recipe coming from Palazzolo Acreide (Siracusa) and try to cook this amazing fennel balls. Ingredients...
Continue
Recipe: Ricotta cheese ravioli with sausage and sauce from Palazzolo Acreide
Ricotta ravioli with sausage sauce are a real siracusan specialty, in which the protagonist is the sausage,  typical product of the hamlet of Palazzolo Acreide.
Continue
The Recipe: Sicilian cannoli
Sicilian cannoli’s name derives from river canes to which the shell was rolled up during the preparation since a few decades ago and it is one of the typical pastries of Italian confectionary. Ingredients FOR THE DOUGH: Rice flour 800 gr Cornmeal 200 gr, cornstarch 300 gr, xanthan gum 10 gr Granulated sugar 120 gr Unsweetened cocoa powder 15 gr, baking powder 15 gr Mars...
Continue
Carnival in the Villages: The best events not to be missed
Carnival in the Villages is a great celebration that involves everyone, from the youngest to the oldest. An opportunity to rediscover local traditions and customs, have fun with masks, dancing, parades of floats, street performers, musical and entertainment shows, games, crafts, street food, tastings and markets. Several events are organized every year all over Italy, which are not to be missed. In Florence, for example, the Great Carnival Parade is a must-see event: a big party dedicated to children that includes masks, music, ga...
Continue