Share
Production area of the delicious Brunello di Montalcino, one of the best Italian wines and among the most appreciated in the world, the village stands at the end of the Val d'Orcia. A medieval village, whose walls appear to have been built in the 13th century, Montalcino is also art and culture. Its historic center is dominated by the mighty Rocca, a fortress built in 1361 as a sign of the passage of the city under the dominion of Siena. 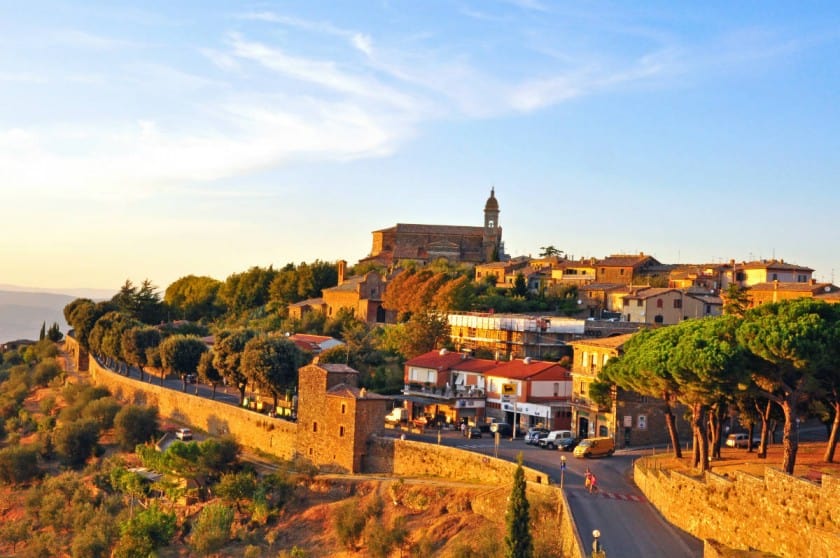 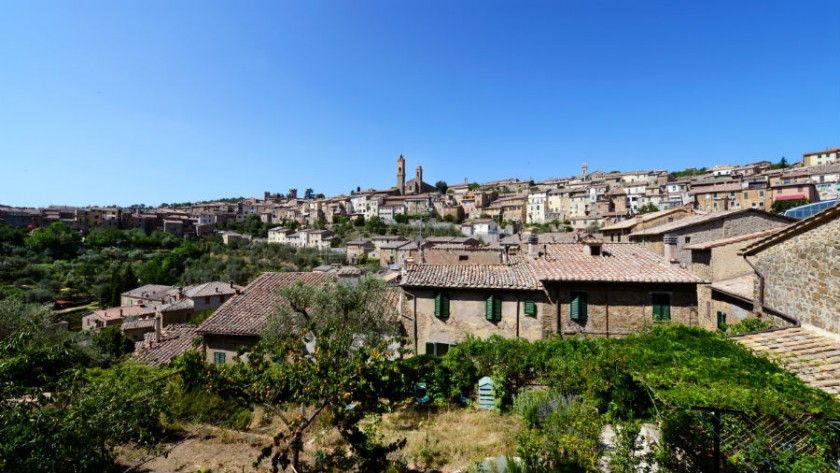 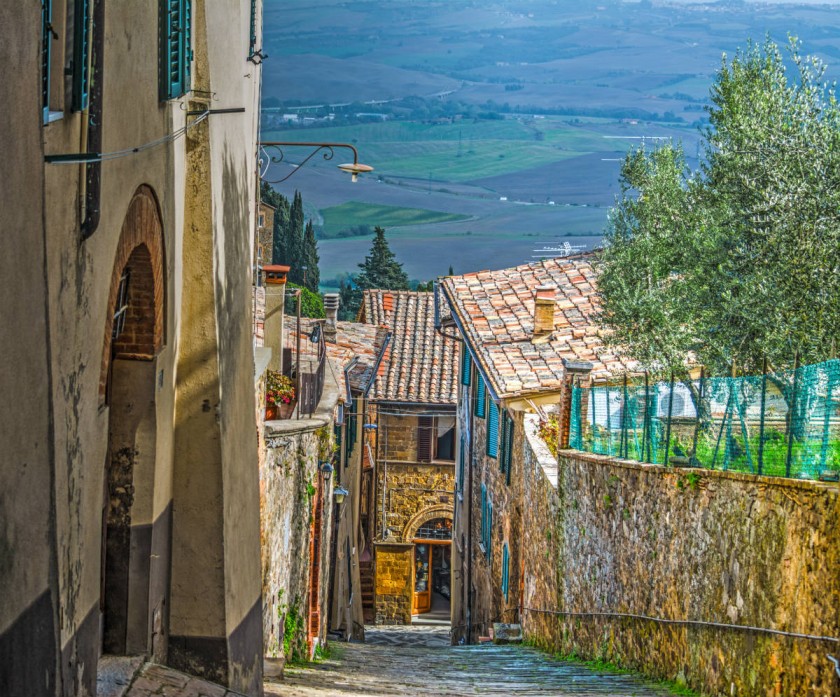 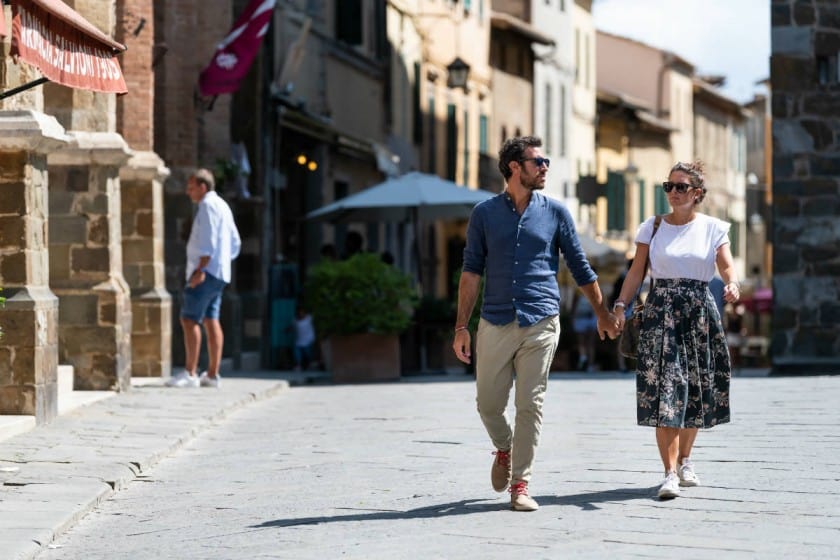 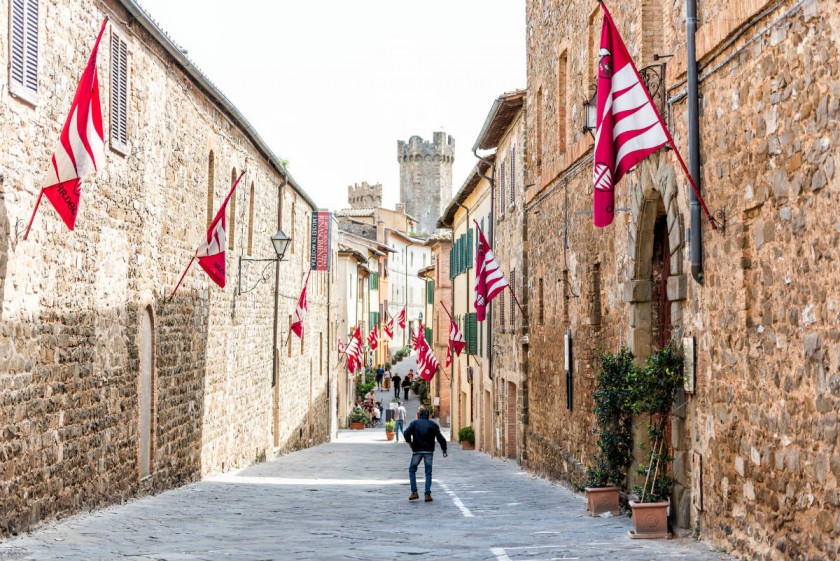 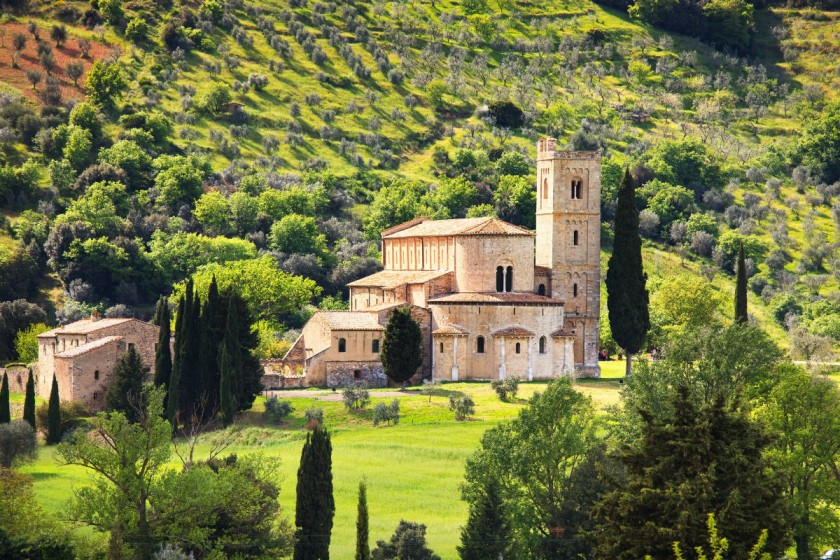 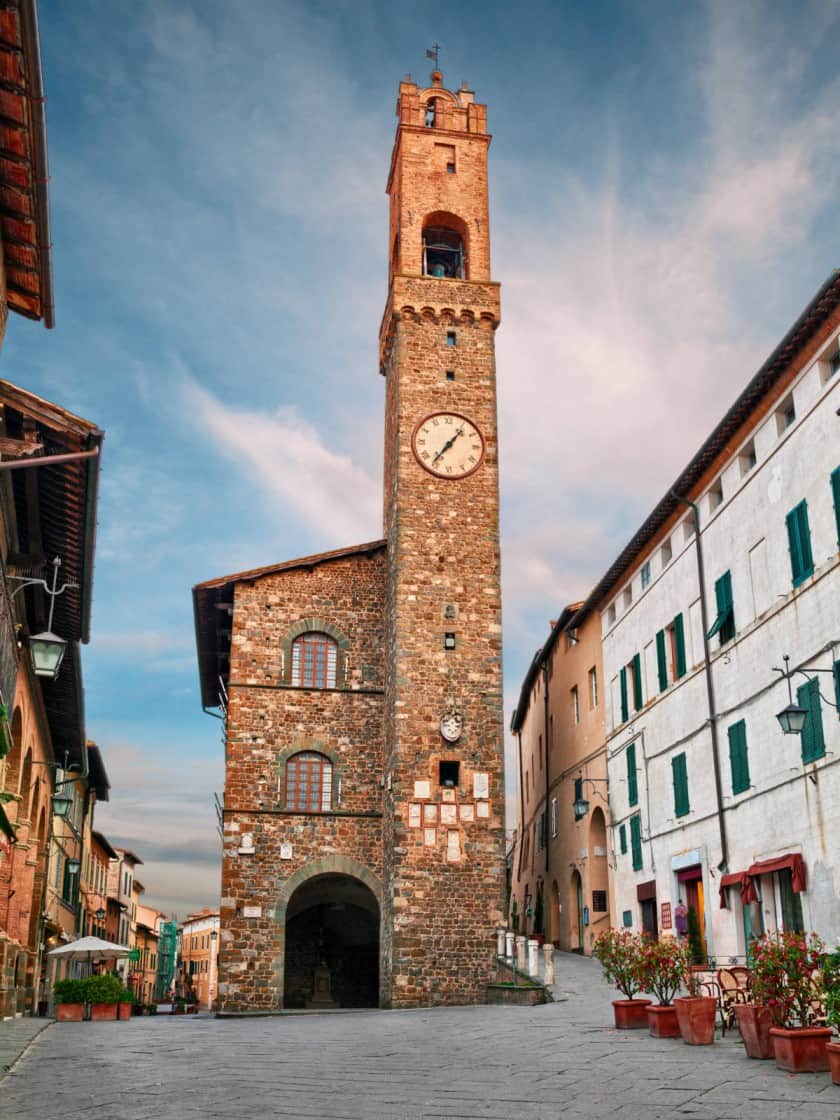 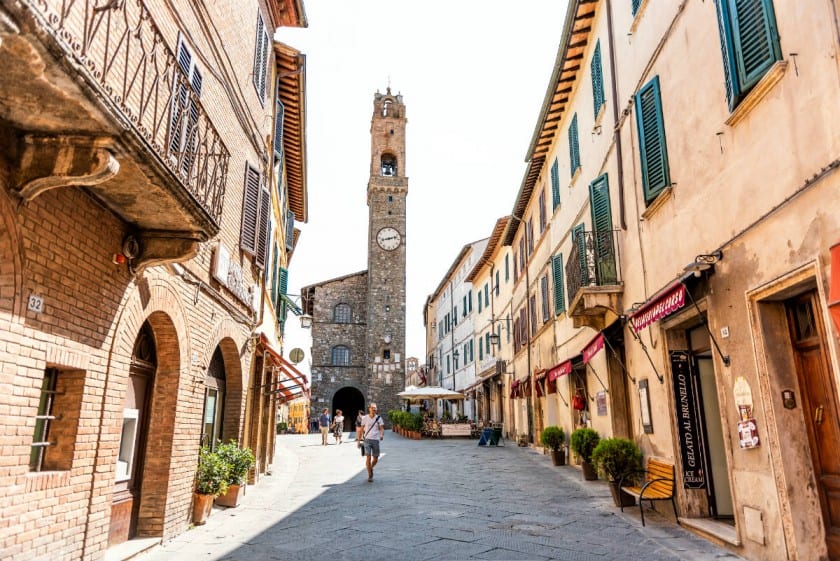 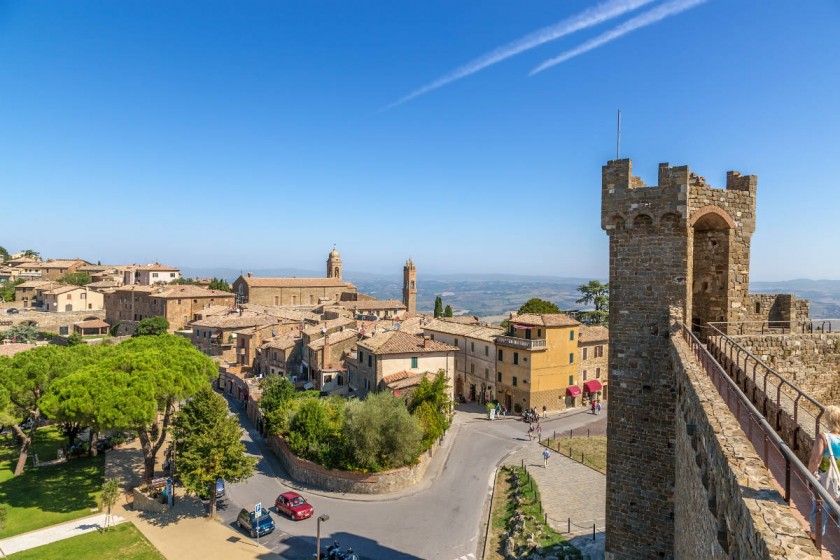 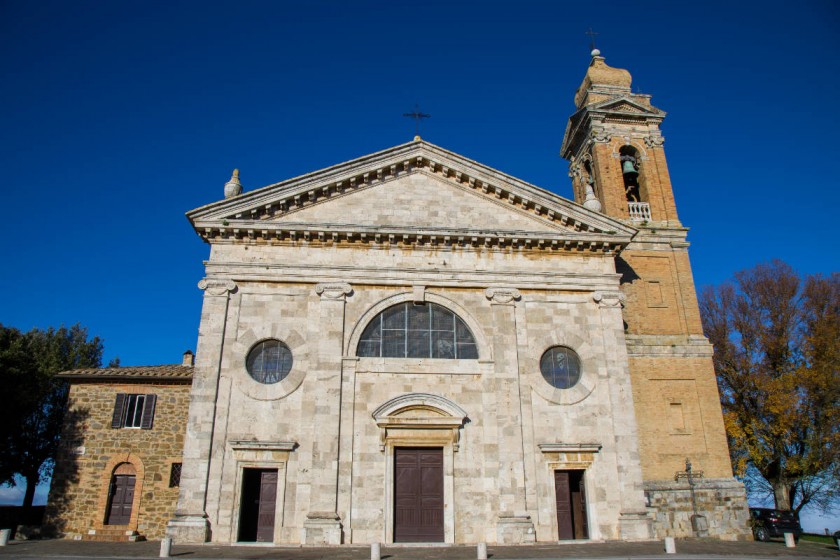 Church of the Madonna del Soccorso 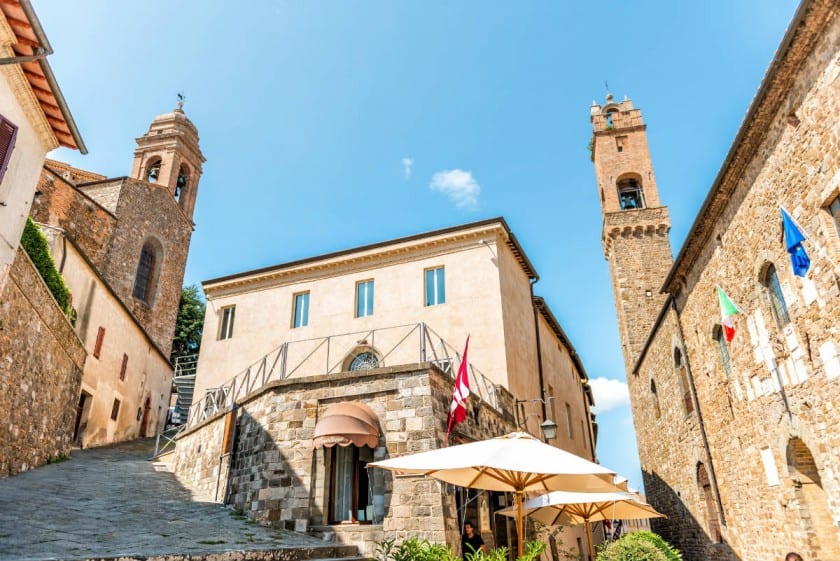 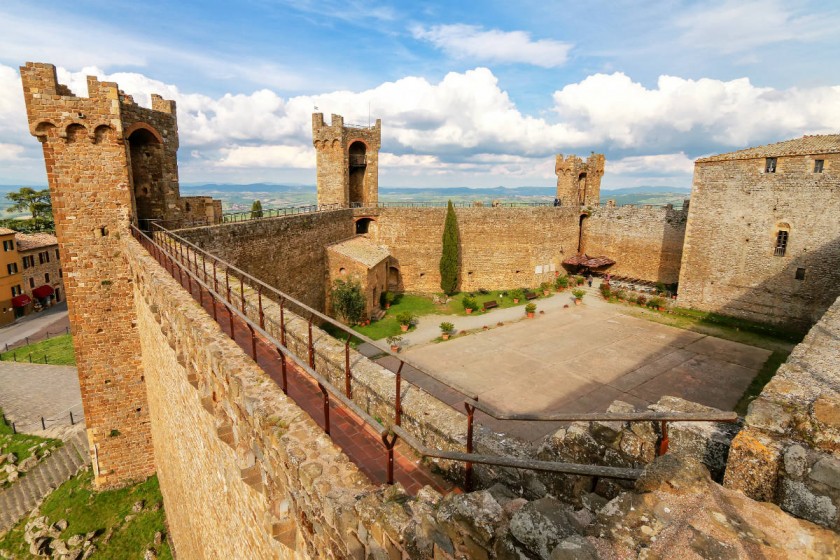 With Montalcino it was love at first sight. He ...
Sara Melito - e-borghi Community 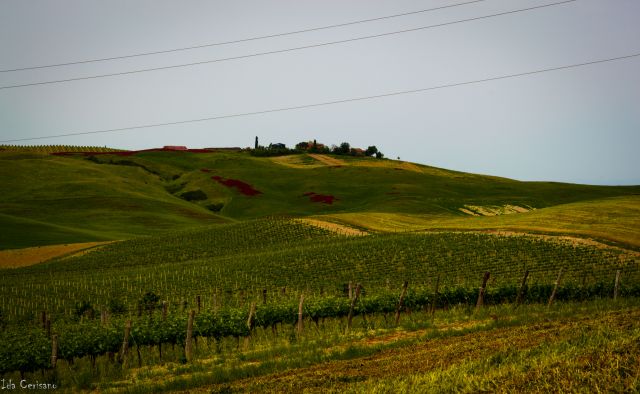 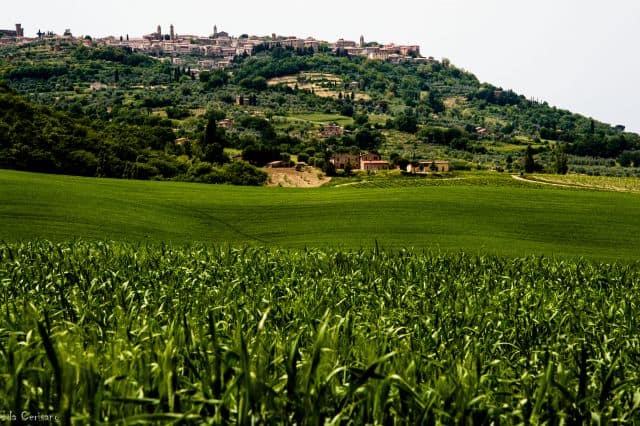 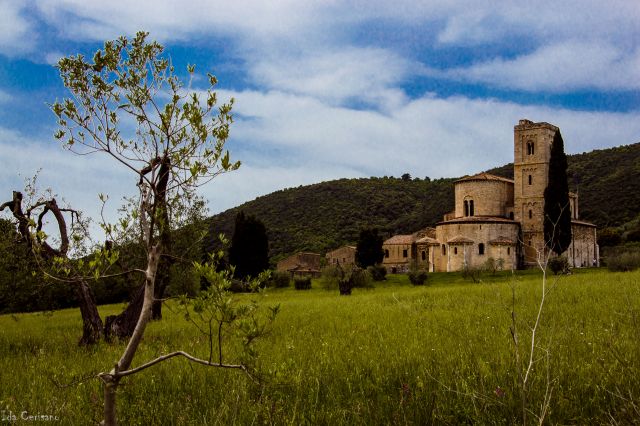 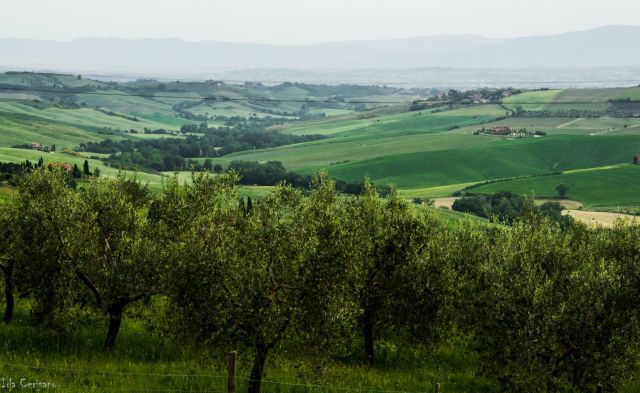 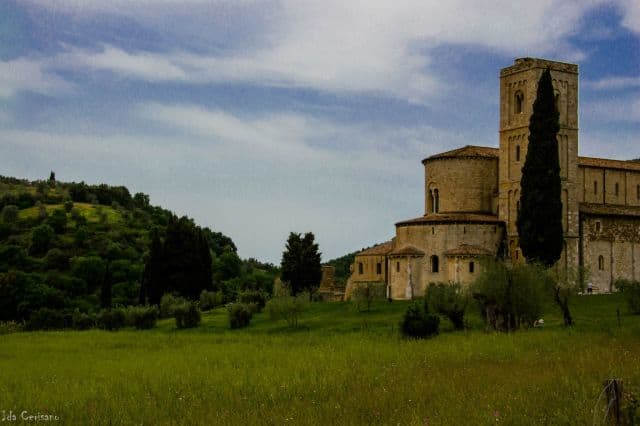 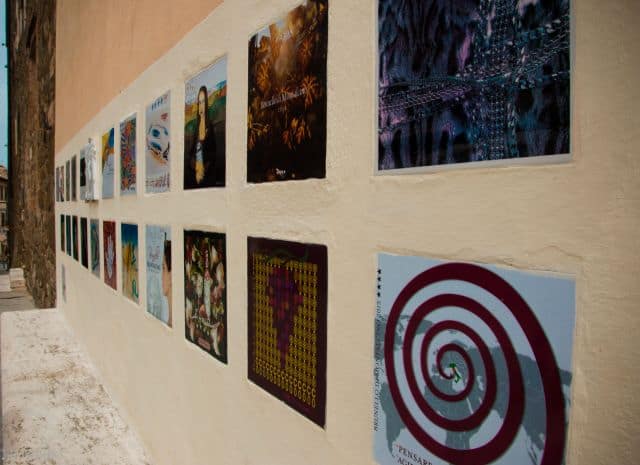 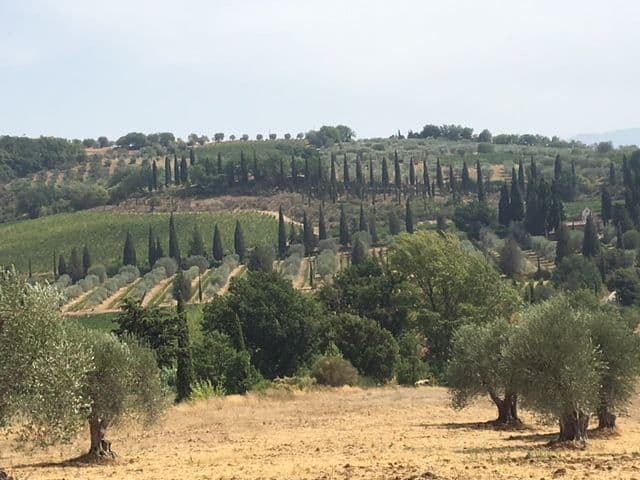 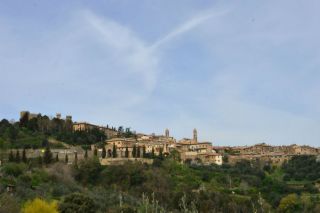 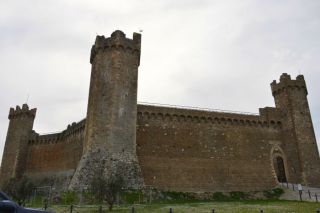 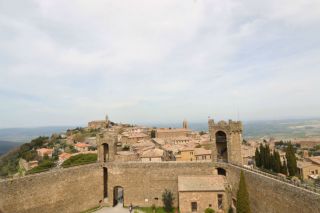 A well known place for the production of Brunello wine, Montalcino is situated in the north-west of Monte Amiata, at the end of the Val d'Orcia. The village rises at an altitude of 564 m a.s.l. but in some points of the region it exceed the 600 m a.s.l. like Poggio Osticcio (624 m a.s.l.), the pass of Lume Spento (621 m a.s.l.) and the Poggio Civitella (661 m a.s.l.) where there is an ancient Etruscan fortress. Montalcino is mentioned for the first time in a document of 29th December 814, when the Emperor Ludovico il Pio granted the territory on Monte Lucini to the abbot of the nearby Abbey of Sant'Antimo.

On the origin of the name of Montalcino, some believe it derives from Mons Lucinus quoted in this document of the 814, named in honor of the goddess Lucina or reference to the latin word lucus, that means "sacred wood", or more generally "small forest". Others, instead, think that the toponym derives from Mons Ilcinus, from Latin mons (mount) and ilex (evergreen oak), "monte dei lecci", a very widespread plant in the area which is also represented in the city coat of arms. The first inhabited nucleus should date back to the X century. In this period the population experienced a notable growth in population when the inhabitants of Roselle moved into the city.

The original inhabited nucleus was extended over the centuries until, in the XIV century, it reached the current size. Thanks to the location of the city, dominating on top of a hill, from its avenues the view can sweep over the valleys of Ombrone and Asso. In medieval times the main economic activity was the tannery and Montalcino had numerous factories for the working of leather, factories which were famous for the quality of their products. But its luck was to be in the centre of one of the most important areas of the cultivation of grapes.

The territory, in fact, is celebrated for the presence of vineyards of Sangiovese from which they obtain the famous Brunello di Montalcino and that are also used for the production of two other DOC wines: Rosso di Montalcino and Sant'Antimo. The main square of Montalcino is Piazza del Popolo. The main building of the square is the Palazzo Comunale, also known as Palazzo dei Priori (between the end of the thirteenth century and the beginning of the XIV). The palace is adorned with the heraldic coat of arms of the numerous podestà who ruled the city over the centuries. A high medieval tower is incorporated in the palace. Near the Palazzo Comunale, there is a Renaissance structure with six round arches, called La Loggia.

The city walls were built in the XIII century. The fortress was built in the highest point of the city in 1361, has a pentagonal structure and was designed by Sienese architects Mino Foresi and Domenico di Feo. The fortress incorporates some of the pre-existing structures including the Mastio di Santo Martini, the tower of San Giovanni and the ancient Basilica, which now serves as the chapel of the castle. In the district Poggio alle Mura, were discovered the fossil remains of a whale that lived in the area more than four million years ago in the Pliocene period when the warm waters of the Tyrrhenian sea covered the area occupied by the existing vineyards. Among the local traditions one to remember is the Thrush Festival that is held on the last Sunday of October and the Tourney for the opening of the hunting season every month of August.

On the external back of the Val d'Orcia there is Montalcino, the homeland of the Brunello, one of the most famous and appreciated Italian wines in the world, as well as the first to obtain in 1980 the Docg certification. Every thing in this hamlet tastes like its grapes, each brick has the colors of its secular tradition. Even the ancient Rocca, built by Sienese people in 1361, today houses in its interior a winery dedicated to the world of Brunello. And with a glass of this nectar of the gods in one hand, you can also be nourished by the music and the theatre, thanks to the shows hosted in the courtyard. Montalcino is in fact rich of art, as well as one the most ancient centres of ceramic production in the whole of Tuscany. The Convent of Sant'Agostino is the place for the city museums. In a really green valley at a certain distance from the village we find the abbey of Sant'Antimo. You might say it looks like a French church, so high, all vertical, in travertine and alabaster. They began to build it in the second half of the XII century. Griffins, eagles, fantastic animals and geometric motifs write stories on the portals of the building and on the capitals. Despite being throughout the year a locality rich in events, folklore and traditions, by far the most outstanding is the Tourney for the opening of the hunting season in mid-August, which is actually an exciting shooting match in which the targets are faithful replicas. The prize is a silver arrow which evokes the ancient tradition of the wild game homage to the castellan.

Discover the other villages on the guide Tuscany - Villages to love

Via della Piazza, 8, località Montenero d'Orcia, Castel del Piano (Grosseto)
12.75 Kilometers from Montalcino
Pottery Museum
The Pottery Museum is located in the locality of Petroio, in the village of Trequanda, in Tuscany.

Palazzo Comunale, Via Roma, 37 , Cetona (Siena)
35.00 Kilometers from Montalcino
The collegiate church of Santa Maria Assunta
The primitive church was built inside the Castle of Casole, a village that drew its wealth from b...

Via dei Canneti, 34, Montepulciano (Siena)
23.40 Kilometers from Montalcino
= distances as the crow flies

Find where to sleep in Montalcino

Località Lupaia, 74, Torrita di Siena (Siena)
21.99 Kilometers from Montalcino
Lupaia
An agritourism resort in the heart of Tuscany, between Pienza Montepulciano. La Lupaia is a luxur...

Our news about Montalcino

Castello di Velona: tastings of Montalcino
At the Castle of Velona Resort Thermal Spa & Winery wellness is the order of the day. Signature cuisine, first of all, then treatments in the thermal spa, tastings of typical Tuscan products and wine tasting with champions of Bacchus from the best Italian vineyards. The Castello di Velona, ​​in fact, is the author's setting for the wine tasting - with the skilful direction of the Millenaria Tower sommeliers - in which guests can taste wine...
Continue
Montalcino: the hills of the Brunello wine
The enchanting hills overlooking Mount Amiata, the history of one of the most beautiful villages of Tuscany and the extraordinary Brunello, the excellence of Italian wines. The hilly area that hosts the village of Montalcino is considered one of the most extraordinary ones in the world. From its 600 m of height, it dominates the Ombrone and Asso valleys and it is one of the most interesting Tuscan centres where in medieval times there was a great number of factories for the manufacturing of leather. ...
Continue
Unique Tuscan villages to Love - Download a free travel guide to the 51 certified Tuscan villages
It has recently been made available a free travel guide by Toscana Promozione Turistica, in Italian and English, about 51 Tuscan villages certified in the Borghi più Belli D'Italia, Paesi Bandiera Arancione, Mibact's Gioielli d'Italia and UNESCO World Heritage Sites. The volume, edited by Claudio Bacillieri, director in chief for Borghi Magazine, accompany th...
Continue