Share
The village of Trequanda stands on the border between the Val d'Orcia and the Crete Senesi. Those who visit are fascinated by the majestic Castle of the Cacciaconti family, with the tall white stone tower and crenellated walls.

The church of the SS. Peter and Paul

A look at Trequanda 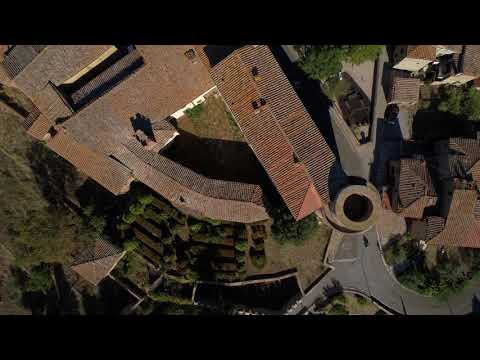 The village of Trequanda is situated on the border between the Val d'Orcia and the Crete Senesi. The name derives from the etruscan toponym Tarkonte, mythical Etruscan hero or by "quandam terram" a certain, particular land.

Certainly the first settlements were Etruscans as demonstrated by archaeological finds and the names of the places (Cennano, Sicille, Malcensis, ACE) to then pass by the roman domination to that of the Lombards and the Franks. Historical documents of the 1198 speak for the first time Trequanda, feud of the Cacciaconti of Scialenga, family of origin franco-salica to which the emperor Otto IV in 1211 conferred the permission to collect gabelle toll in court and in the land of Trequanda. For its dominant position was still the interference of the Republic of Siena in matters trequandine until in 1255 imposed its jurisdiction. At the time of the war between Florence and Arezzo The castle was the refuge of the Ghibellines and after the defeat of Arezzo in the battle of Campaldino in 1289 the Guelfa Siena threatened to shave to ground the Castle. Transferred from the Cacciaconti the Franzesi of Staggia in 1309 to 18,000 lire, the castle passed definitively under the Sienese Balzana. In 1552 it became part of the Grand Duchy of Tuscany.

Important are the production of terracotta (Petroio) and breeding, in the wild, of chianina cattle. Mainly agricultural, Trequanda is transformed in recent years into a center of holidays and rest with equipped farmhouses and holiday homes. The foods of the place still retain their ancient flavor; from the bread without salt birds with cacio (pecorino cheese) to panunto (bruschetta) to pork sausages etc. Pride of the local cuisine is the extra virgin olive oil, fruit of the particular habitat in which are cultivated in the whole municipal territory, olive groves.

Also Trequanda, as many Tuscan villages, rests on a hill surrounded by dense woods and tidy cultivations of olive trees and vineyards. We know that it arose in function of the castle, on the road that linked Siena to Chiusi, but when and how is not clear. Also the meaning of the name is obscure, but it sounds good and is nice, just as you read it arriving at its delicious station, down in the valley of the Asso.
Its walls are almost intact even if, of the three original doors only two remain: Porta al Sole and Porta al Leccio. In front of Piazza Garibaldi stands the old castle Cacciaconti, with an imposing cylindrical tower and fronted by a charming Italian garden.
Not far away is the church of Saints Peter and Andrew, from the facade in ashlars whites and blacks, inside which preserves a fresco of the Sodoma, a terracotta statue attributed to Sansovino and the urn with the relics of the Blessed Bonizzella Cacciaconti, to whom is dedicated a village festival in May.
Outside the historic center, immersed in a grove of holm oaks and cypresses, is located a colombaio of the end of the Eighteenth Century. Built at the time of the Grand Duke Leopoldo, it is a rare building in its genre, of proportions carefully designed and built with refined artisan craftsmanship.
Around the town, but distant many hills and small valleys are the fractions Castelmuzio, compact lump of houses that still lives of the richness of the olive groves, and Petroio, small capital of terracotta.

Via Ansano Landucci, 44, Torrita di Siena (Siena)
9.29 Kilometers from Trequanda
Cassero
In front of the formwork there is the Piazza delle Logge, in Lucignano

Via Rosini - 52046, Lucignano (Arezzo)
11.25 Kilometers from Trequanda
Porta San Giusto
Porta San Giusto is the privileged access point to the historical centre of the village of Lucign...

Piazza Cisterna, 2 - 53031, Casole d'Elsa (Siena)
54.68 Kilometers from Trequanda
The collegiate church of Santa Maria Assunta
The primitive church was built inside the Castle of Casole, a village that drew its wealth from b...

Strada Provinciale di Pieve a Salti , Buonconvento (Siena)
13.61 Kilometers from Trequanda
Agriturismo Spazzavento
Our Agriturismo dates back to the XVIII Century when a few monks from Città della Pieve, decided ...

Via Berignano, 76 - 53037, San Gimignano (Siena)
59.15 Kilometers from Trequanda
Fonteverde Tuscan Resort & Spa
It is a place of infinite grace.

Loc. Terme 1, San Casciano dei Bagni (Siena)
40.19 Kilometers from Trequanda
Albergo Ristorante La Fontanella
A quiet environment where everything is studied in detail by the owners Danilo and Nila.

Piazza Roma 38, San Casciano dei Bagni (Siena)
39.68 Kilometers from Trequanda
Azienda Agrituristica Pomponi
In a genuine Tuscany, an authentic farm greets you with the sincere warmth of a family.

Località Casale, 19, San Gimignano (Siena)
60.00 Kilometers from Trequanda
Giacomo Mori
Since the end of the 19th century, the wine, born in the cellars of Palazzone, has travelled the ...

Piazza Pertini 8, San Casciano dei Bagni (Siena)
40.09 Kilometers from Trequanda
Cantine Ravazzi
The Ravazzi Cellars have conquered the area between Umbria and Tuscany as a synonym of genuineness.

Via delle Cantine, 2 - Loc. Palazzone, San Casciano dei Bagni (Siena)
39.76 Kilometers from Trequanda
Pasticceria Il Campanile
A small place located at the entrance of San Casciano, where you can enjoy excellent croissants a...