Share
On a hill in the Val d'Orcia stands the village dominated by one of the most spectacular Tuscan fortresses: Radicofani. Its historic center stands out for its splendid buildings. Among the numerous places of worship, the most remarkable building is the Romanesque church of San Pietro. The village is also known as the city of fountains. 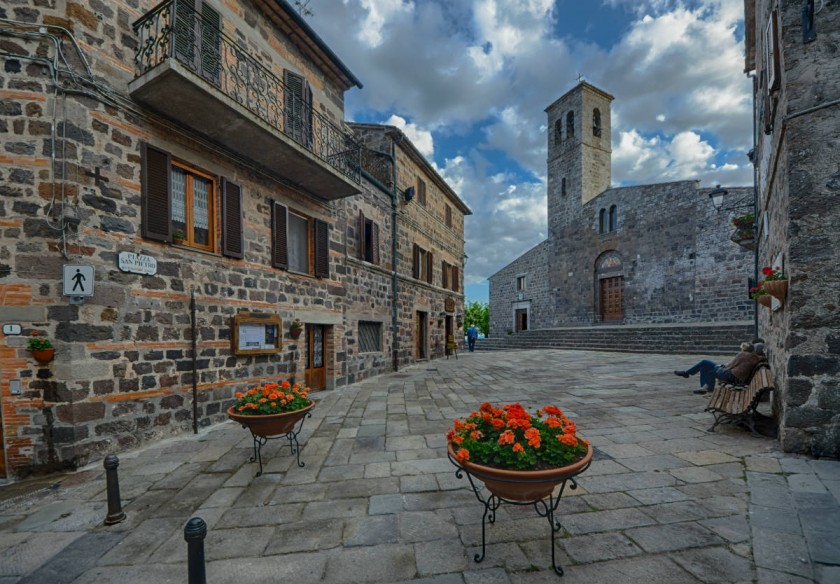 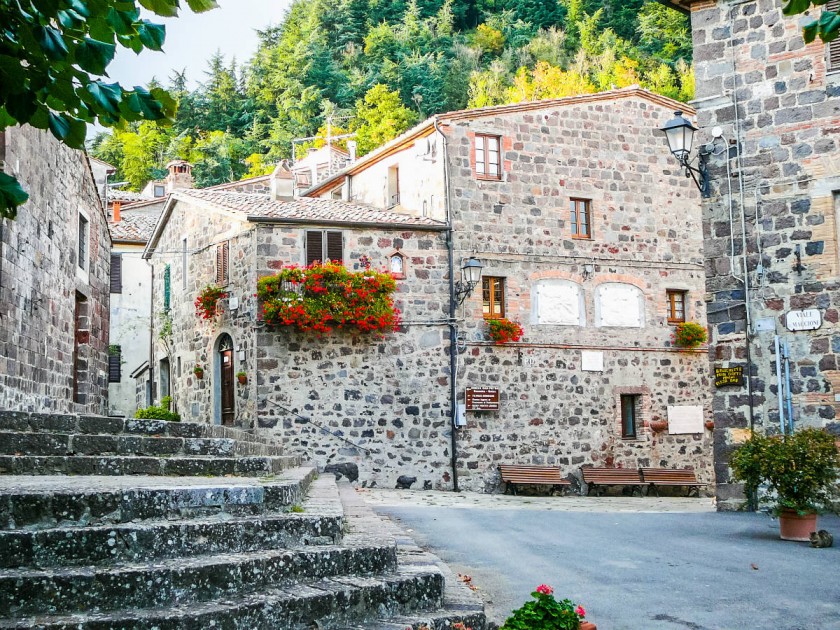 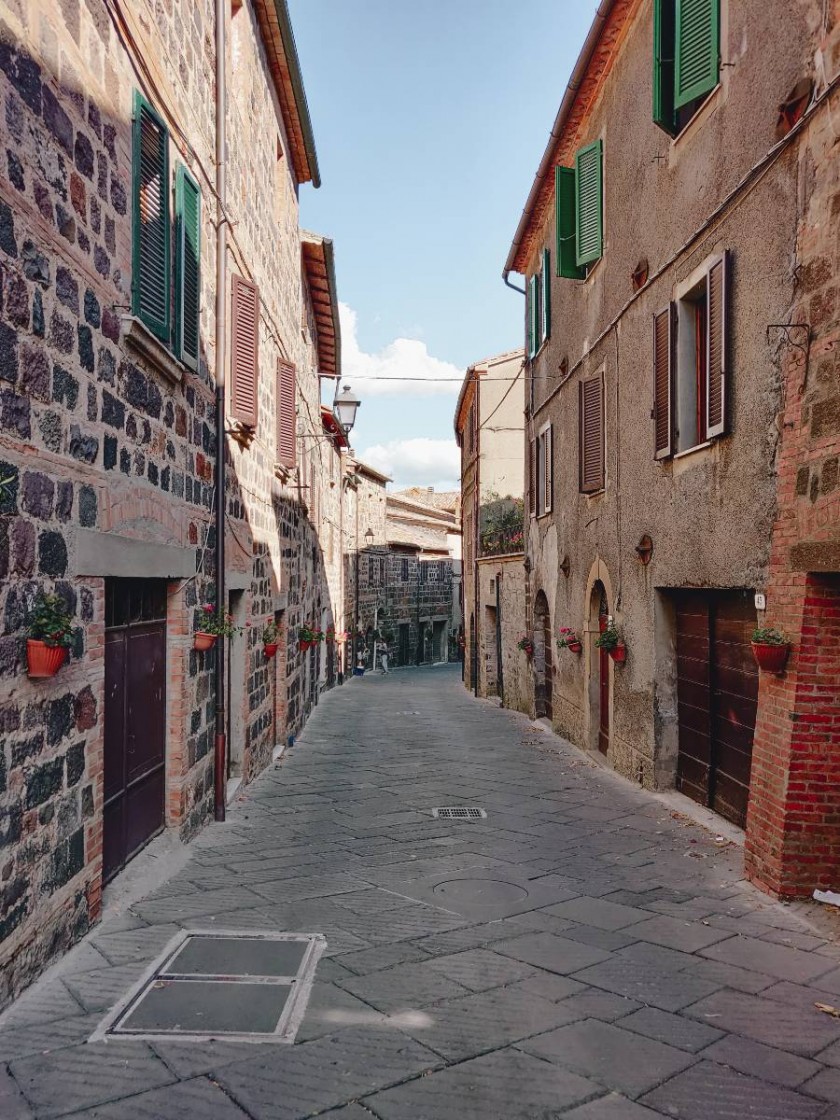 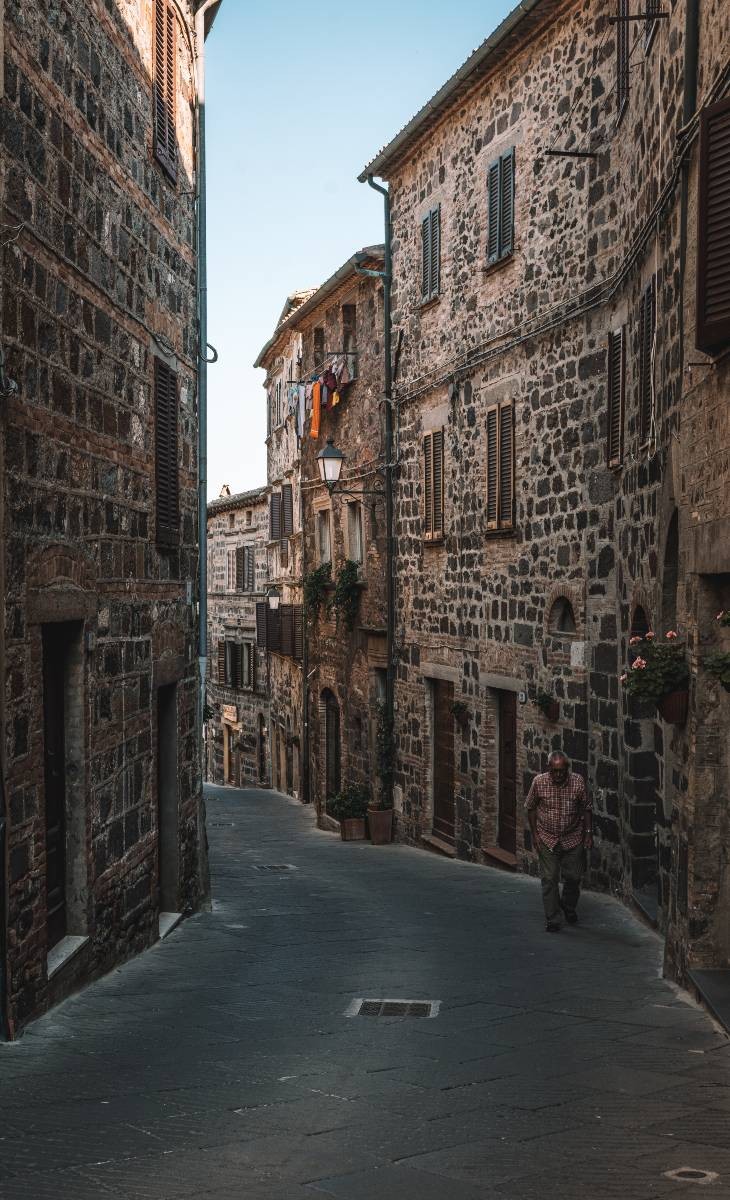 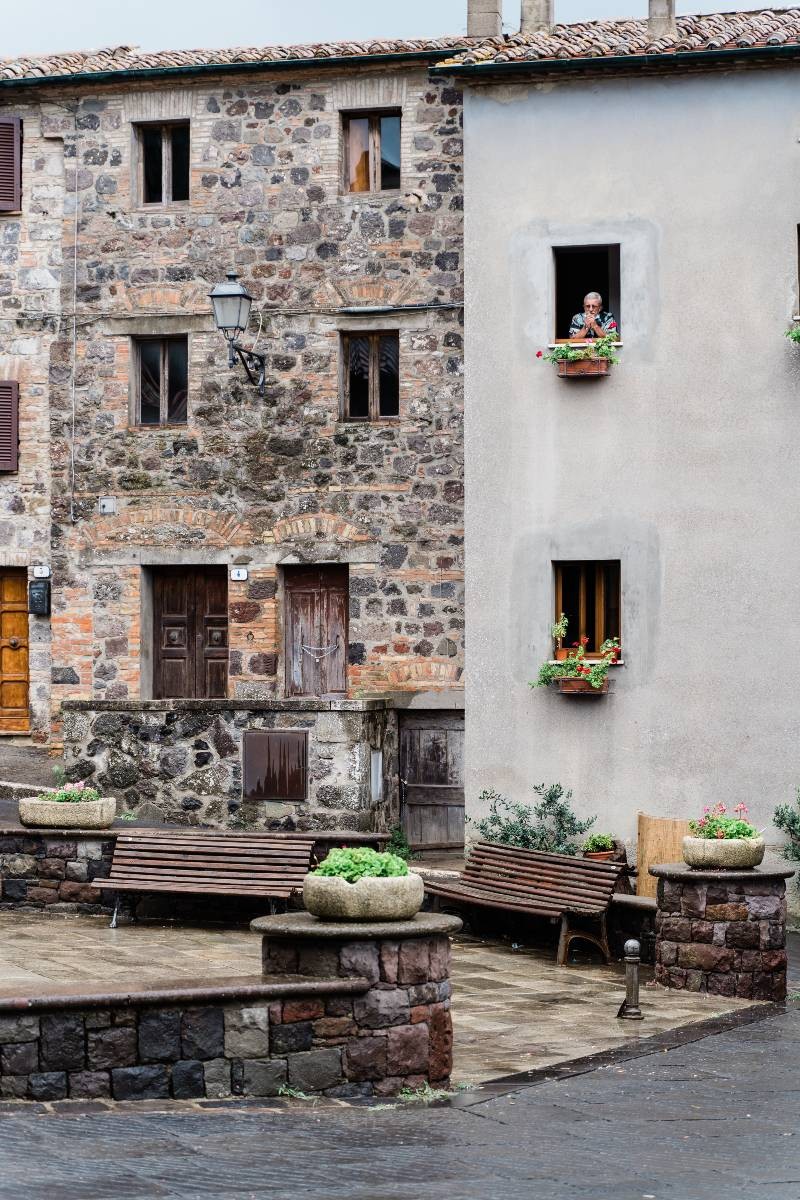 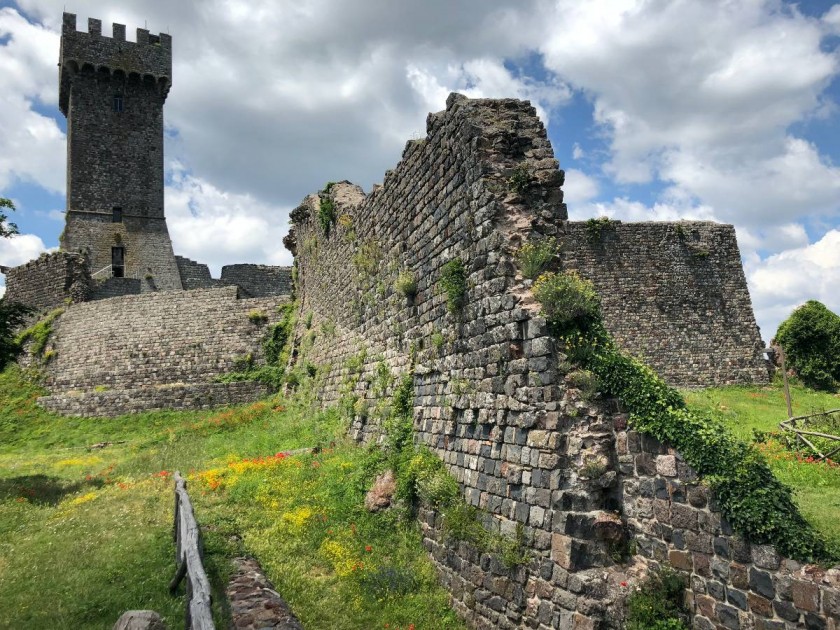 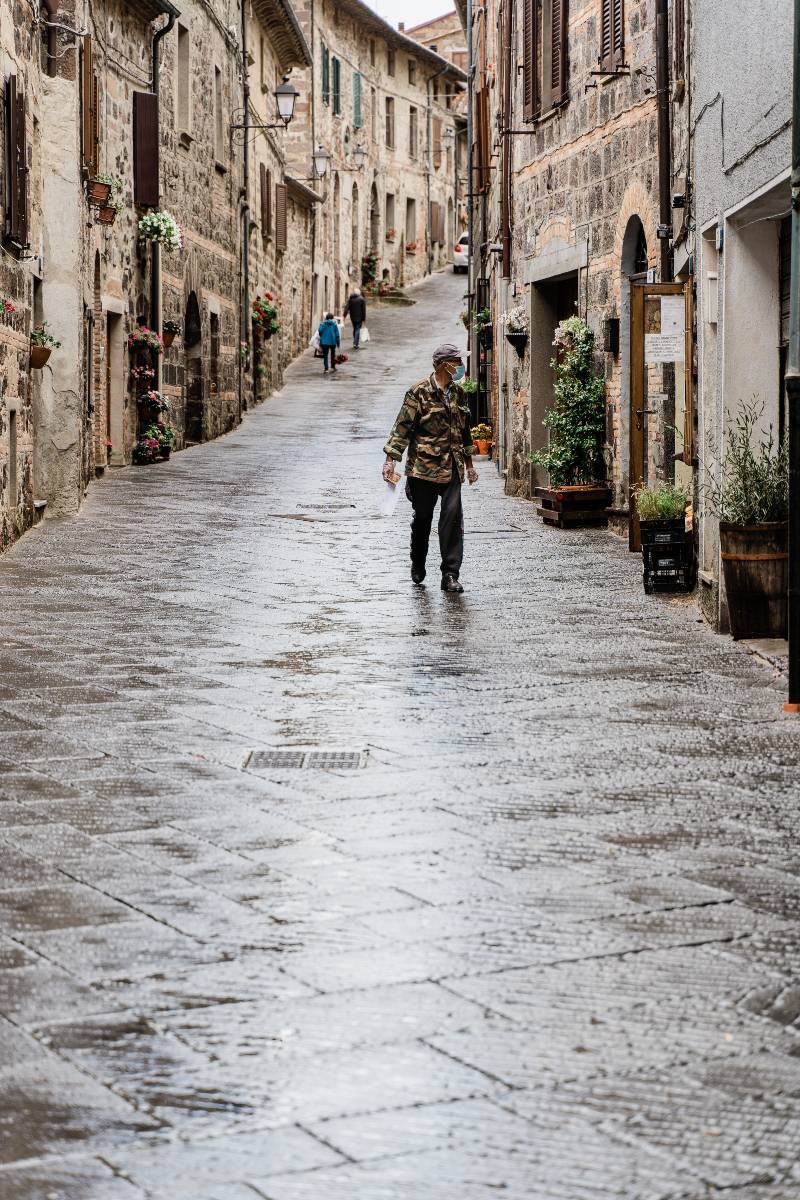 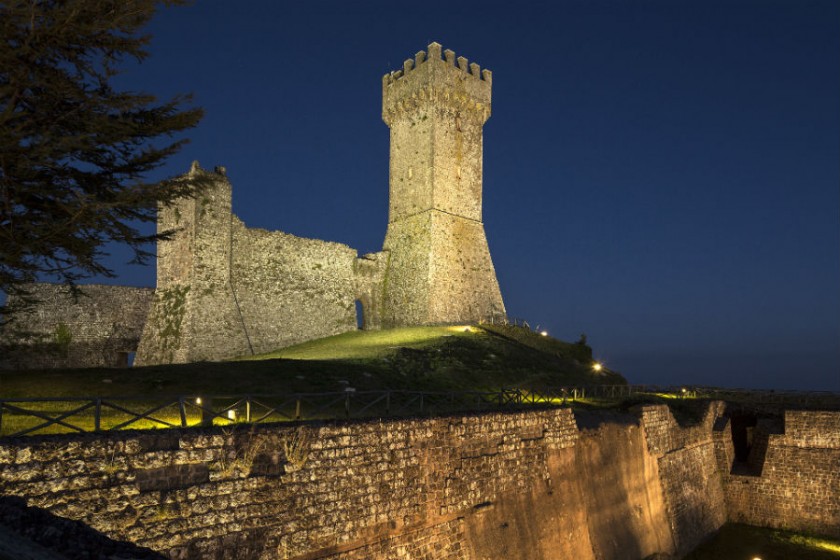 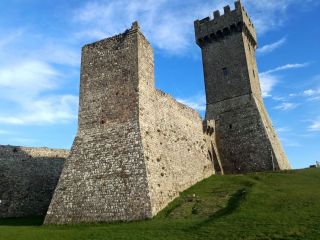 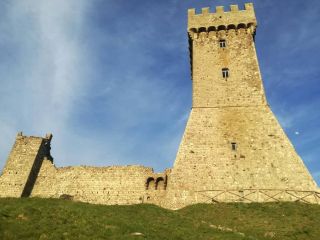 Radicofani is a village in the Val d'Orcia, known because it was under the dominion of Ghino di Tacco.
Thanks to its strategic position on the Via Francigena, Radicofani became a possession of the Papal State.

The village is dominated by one of the most spectacular Tuscan fortresses. The Rocca, whose existence has been documented since 978, is linked to the figure of Ghino di Tacco, who in 1297 settled in the fortress and began to ambush the wayfarers along the Via Francigena.

The historic center of Radicofani stands out for its splendid buildings, such as the Palazzo Pretorio with ancient stone coats of arms, or the Palazzo della Posta, a beautiful Medici villa built as a hunting lodge of the emperor Ferdinand I.

Among the numerous places of worship, the most noteworthy building is the Romanesque church of San Pietro, from the 13th century, damaged by the last war and restored in 1946. On the main road is also to see the Church of Sant'Agata, on whose altar there is a Della Robbia woman with the Madonna with Child and the Saints Francis, Elizabeth of Hungary, Cristina of Bolsena (or Orsola) and Lorenzo.

Radicofani is also known as the city of fountains. The thirteenth century Fonte Grande, located on the Via Francigena, the monumental seventeenth-century Medicean Fountain, the sixteenth-century Fonte dei Cappuccini and that of the Antese.

In Radicofani, in the first weekend of July, the "Piaceri d'estate" event takes place, a showcase for the development of the territory, which develops through a series of events: a market of local food and wine products (each year an Italian region is hosted, in the 2005 Lazio and Molise in 2006), a conference on agricultural and environmental issues, animation of the Rocca area, astronomical observation with the naked eye and telescopes by the "Astroturistika" association of Sarteano.
Also noteworthy is the assignment of the journalistic prize "Tesori della Val d'Orcia".
Among the popular festivals, in the Contignano hamlet, is the Sagra del Raviolo, an event particularly felt by the local population.

Crossed by the ancient Via Francigena, which also constitutes the main road axis, the village of Radicofani, of clear medieval imprint, is surmounted by a volcanic cliff, the top of which houses the great Fortress, built in 1154 and then transformed by the Medici in the middle of the Sixteenth Century. We climb up there to fully enjoy the incredible views.
We move in the historical center, to discover the small great treasures of the churches of San Pietro and Sant'Agata which preserve inside them five works by Della Robbia.
Strolling through the streets of the Jewish Quartier, take a look at the rest of the ancient village, until we arrive at the charming monumental station "Bosco Isabella", a romantic garden-esoteric built by the family Luchini at the end of the Nineteenth Century.
Along the Via Francigena, built by the famous grand-ducal architect Bernardo Buontalenti for the Grand Duke Ferdinando Doctors in 1584, we find the great "Osteria Grossa". Used up to the end of the nineteenth century as a post station and change of horses, has hosted over the centuries, in addition to a large number of travellers and pilgrims, numerous illustrious personalities, among which Mozart and Charles Dickens, during their travels in Italy. In front of the post station, we admire the magnificent Fontana built for Ferdinando I to watering the horses.

Via Soccini, 18, Buonconvento (Siena)
35.48 Kilometers from Radicofani
Pottery Museum
The Pottery Museum is located in the locality of Petroio, in the village of Trequanda, in Tuscany.

Via Valgelata 10, località Petroio,, Trequanda (Siena)
27.94 Kilometers from Radicofani
Palazzo Pretorio
In the middle of the road that connects the imposing fortress to the Collegiate Church of Santa M...

Find where to sleep in Radicofani

Via Berignano, 76 - 53037, San Gimignano (Siena)
86.29 Kilometers from Radicofani
Lupaia
An agritourism resort in the heart of Tuscany, between Pienza Montepulciano. La Lupaia is a luxur...

Travel proposals in Radicofani and in its territory

Our news about Radicofani

Recipe: Castagnaccio, the dessert of the Tuscan villages that smell of wood
A taste that comes from the past, a "convict" taste that made people fall in love, a poor and ancient sweet of Tuscan cuisine that enriches the table in the fall. The castagnaccio is a characteristic autumn dessert of the villages in the Apennine areas of Tuscany, Liguria, Emilia and Piedmont and, depending on the region in which it is cooked, presents some differences. In Tuscany, for example, the cake is about a centimeter tall and according to the traditional recipe should be made with chestnut flour from the Mount Amiata. One of ...
Continue
Recipe: Salted Cookies of the Amiata
ALSO FOR VEGANS Today we celebrate the Italian...
Continue
Unique Tuscan villages to Love - Download a free travel guide to the 51 certified Tuscan villages
It has recently been made available a free travel guide by Toscana Promozione Turistica, in Italian and English, about 51 Tuscan villages certified in the Borghi più Belli D'Italia, Paesi Bandiera Arancione, Mibact's Gioielli d'Italia and UNESCO World Heritage Sites. The volume, edited by Claudio Bacillieri, director in chief for Borghi Magazine, accompany th...
Continue