Share
Located on the top of a hill between the Valdichiana and the Val d'Orcia, Montefollonico is a place of peace and serenity, surrounded by walls that still retain some cylindrical towers and the tower of the Cassero from 1277. 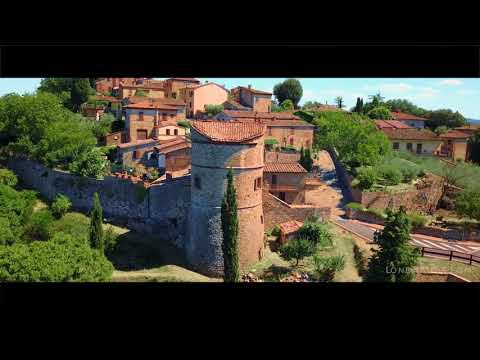 The village is situated on top of a hill between the Val di Chiana and Val d'Orcia. The first news on the population of the area date back to the men of Neanderthal (60,000 years ago) with the Lithic tools found in the area of "Il Tondo" (now the public garden). The territory also preserves traces of frequentation of Etruscan and Roman times. The village developed between the XII and the XIII century, first with the foundation of the church Pieve di San Leonardo by the cistercian monks of the nearby monastery, then as a fortified village of the Sienese Republic. The name derives from the latin fullones (people who worked the woolen clothes), this is because the monks dedicated themselves to fulling wool. Its strategic location, it was in fact a useful outpost against Montepulciano, ally of Florence. In 1543 surrendered to the imperial army of Charles V and became part of the Fiorentino dominion of doctors.

Montefollonico is surrounded by walls, which still preserve some cylindrical towers and tower of Cassero, 1277. You also retain the three gates (Porta in Follonica, gate of Triano and port of Pianello), which still give access to the historic center. The village houses the church of San Leonardo, remembered from 1216, the monastery of Santa Maria, founded by the benedictines before 1170 and abandoned in the XVIII century and the Palazzo Pretorio. The public cistern of Montefollonico is located next to the Palace of Justice in the main street. On the front of the well it can be noted that the three ancient coats of arms of relevance to the community of the country: the first belongs to the family of the marchesi Coppoli, according to the family Landucci and more in general to the Municipality of Montefollonico, the third represents instead a religious Corporation. The Natural Park The Tondo, near the village, at the top of the hill, consists in a wood of cypresses and holm oaks arranged in a circular fashion. Depart from here a series of walking paths around the hill.

The pecorino from the area, called a great old man of Montefollonico has a great reputation and recognition of P.A.T. "...it would like a dash of Vin Santo?..", instead, is the gastronomic fair held in December, focused on vin santo.

On the top of a hill, between the Val di Chiana and the Val d'Orcia, there is a charming stone village, which developed between the XII and the XIII century and still today preserved homogeneous and intact. The historic center is in fact protected and enclosed by imposing thirteenth century walls, terracotta and stone, and accessed by crossing one of the original three doors, still well preserved, among which stands out the door of Triano.
The village probably owes its name to the cloths washers, called by the romans fullones. The cloths were subjected to blows of heavy clubs moved by water mills. The cistercian monks who founded the first residential settlement in this area dedicated themselves, in fact, to fulling wool.
Entering among the narrow streets and contorted and low houses and rustic, we reach the Palazzo Pretorio, with its bell tower and beside a marble well of the Seventeenth Century. Little far away, the romanesque parish church of San Leonardo, with a notable portal round arched with columns and capitals sculpted.
In the medieval frame of the village during the holidays of 8 December, takes place the traditional food and wine event Would you like a dash of Vin Santo? during which visitors are welcomed in the old cellars, opened for the occasion. Offer the Vin Santo is in fact one of the most ancient Tuscan hospitality gestures, and today as then, is offered in small doses as a really valuable product.

Piazza Grande, 4, Montepulciano (Siena)
4.86 Kilometers from Montefollonico
Pottery Museum
The Pottery Museum is located in the locality of Petroio, in the village of Trequanda, in Tuscany.

Via V. Emanuele, 91, Castiglione del Lago (Perugia)
24.94 Kilometers from Montefollonico
Agriturismo Spazzavento
Our Agriturismo dates back to the XVIII Century when a few monks from Città della Pieve, decided ...

Viale Manciati, 2, San Casciano dei Bagni (Siena)
30.53 Kilometers from Montefollonico
Azienda Agrituristica Pomponi
In a genuine Tuscany, an authentic farm greets you with the sincere warmth of a family.

località Montefreddo, San Casciano dei Bagni (Siena)
29.48 Kilometers from Montefollonico
Albergo Ristorante La Fontanella
A quiet environment where everything is studied in detail by the owners Danilo and Nila.

Località Casale, 19, San Gimignano (Siena)
69.15 Kilometers from Montefollonico
Giacomo Mori
Since the end of the 19th century, the wine, born in the cellars of Palazzone, has travelled the ...

Piazza Pertini, 8, San Casciano dei Bagni (Siena)
30.95 Kilometers from Montefollonico
Cantine Ravazzi
The Ravazzi Cellars have conquered the area between Umbria and Tuscany as a synonym of genuineness.

Piazza Pertini 8, San Casciano dei Bagni (Siena)
30.95 Kilometers from Montefollonico
Pasticceria Il Campanile
A small place located at the entrance of San Casciano, where you can enjoy excellent croissants a...

Panizzi Winery, San Gimignano (Siena)
Vernaccia di San Gimignano DOCG Riserva
A great example of the ability of evolution and tightness in time of this wine.

La Bagnaia Golf & Spa Resort Siena: welcome to the medieval village
The sparkling air and the spectacular landscapes of the Sienese countryside are the ideal destination for a journey far from everyday life, the office and the city. Above all, allow you to regain the pleasure of a holiday in which every moment is a gift. The right address is La Bagnaia Golf & Spa Resort Siena, Curio Collection by Hilton, an authentic and perfectly preserved medieval village, an oasis of peace and tranquility set in 1,100 h...
Continue
Castello di Velona: tastings of Montalcino
At the Castle of Velona Resort Thermal Spa & Winery wellness is the order of the day. Signature cuisine, first of all, then treatments in the thermal spa, tastings of typical Tuscan products and wine tasting with champions of Bacchus from the best Italian vineyards. The Castello di Velona, ​​in fact, is the author's setting for the wine tasting - with the skilful direction of the Millenaria Tower sommeliers - in which guests can taste wine...
Continue