Share
Recognized as little Barcelona, the seaside village of Alghero is the capital of the Coral Riviera. One of its characteristics is its landscape. Outside the historic center and the rest of the urban districts, the large area of the municipality boasts several beaches, bays and natural parks on the coast. The Capo Caccia promontory and its lighthouse constitute one of the icons of the city.

The Cave of Neptune
jasomtomo/shutterstock.com 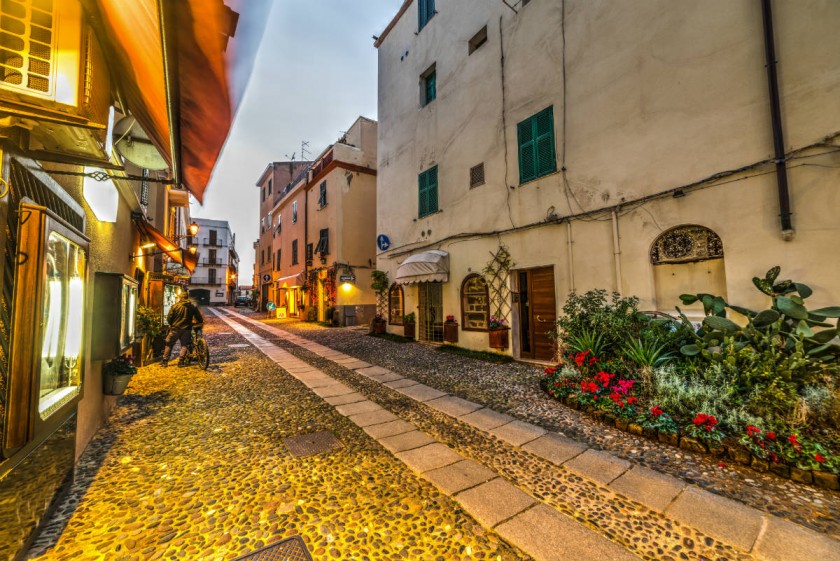 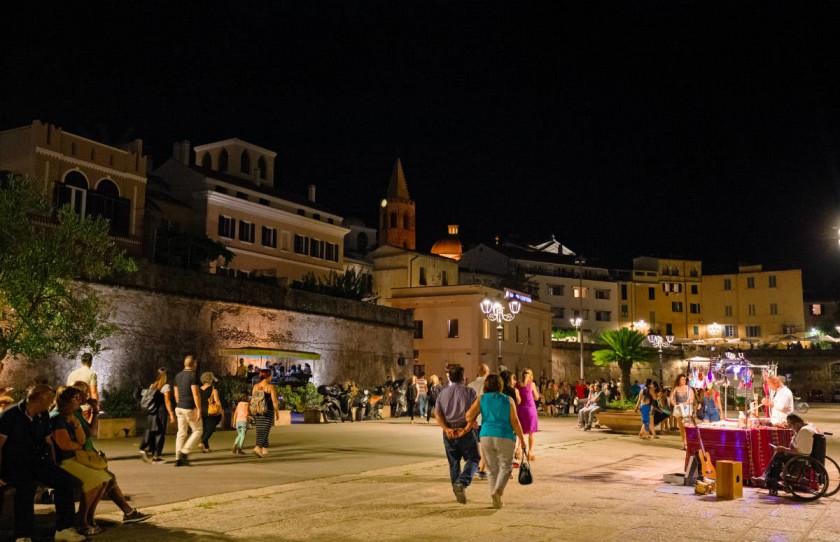 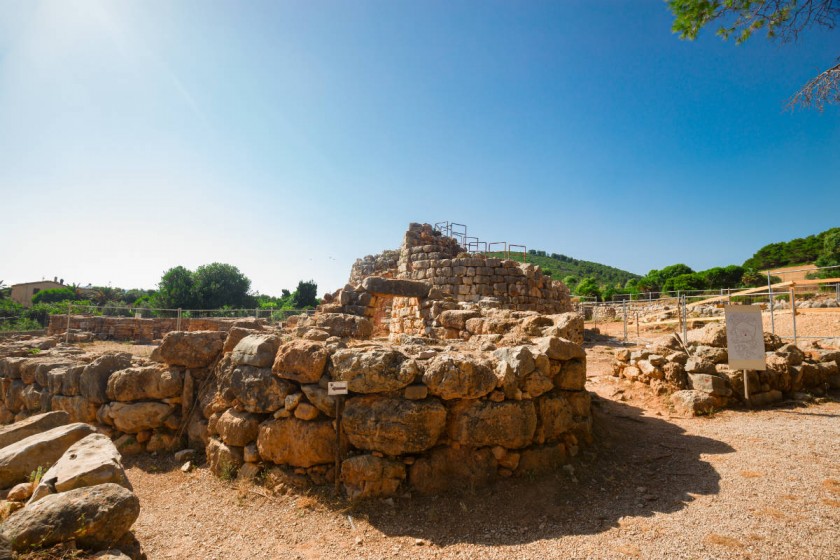 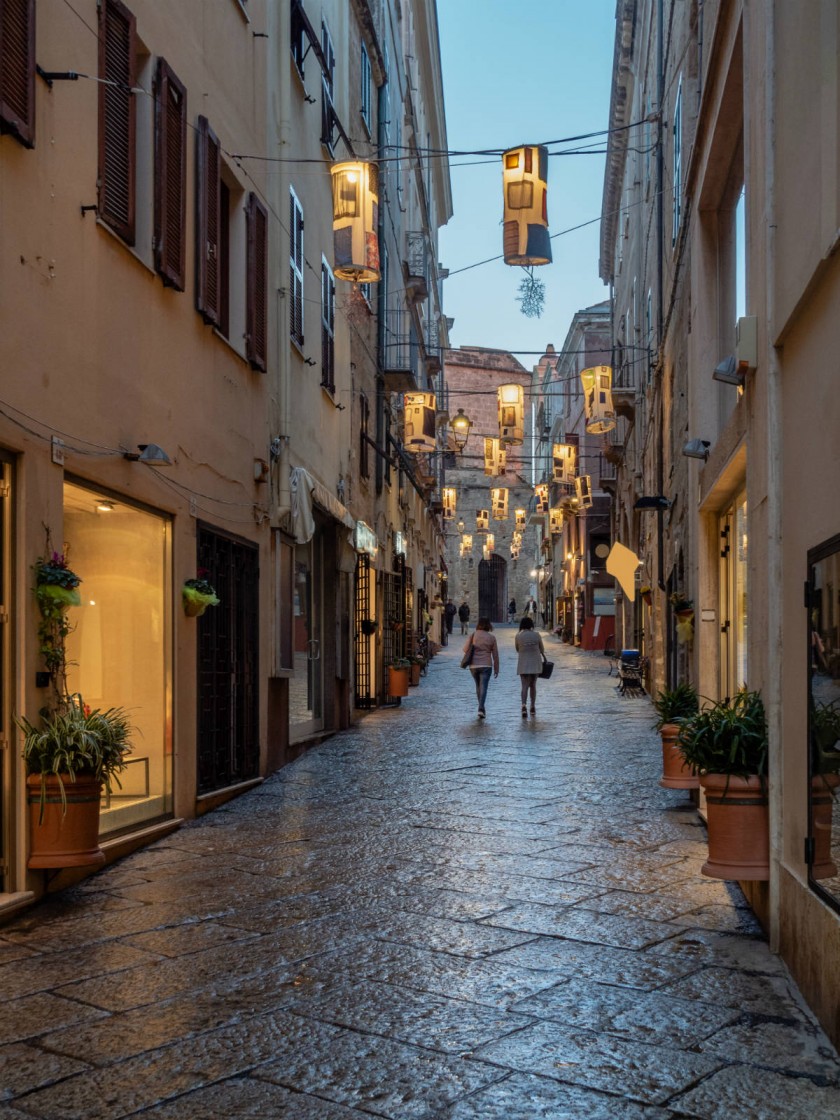 Alghero in the evening
KajzrPhotography/shutterstock.com 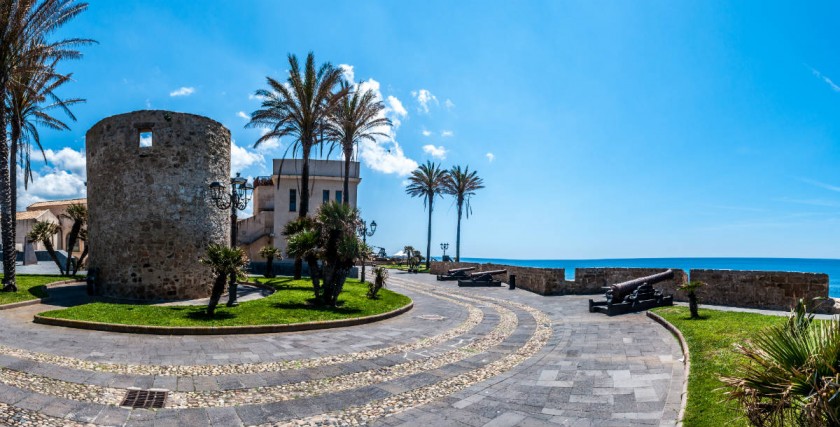 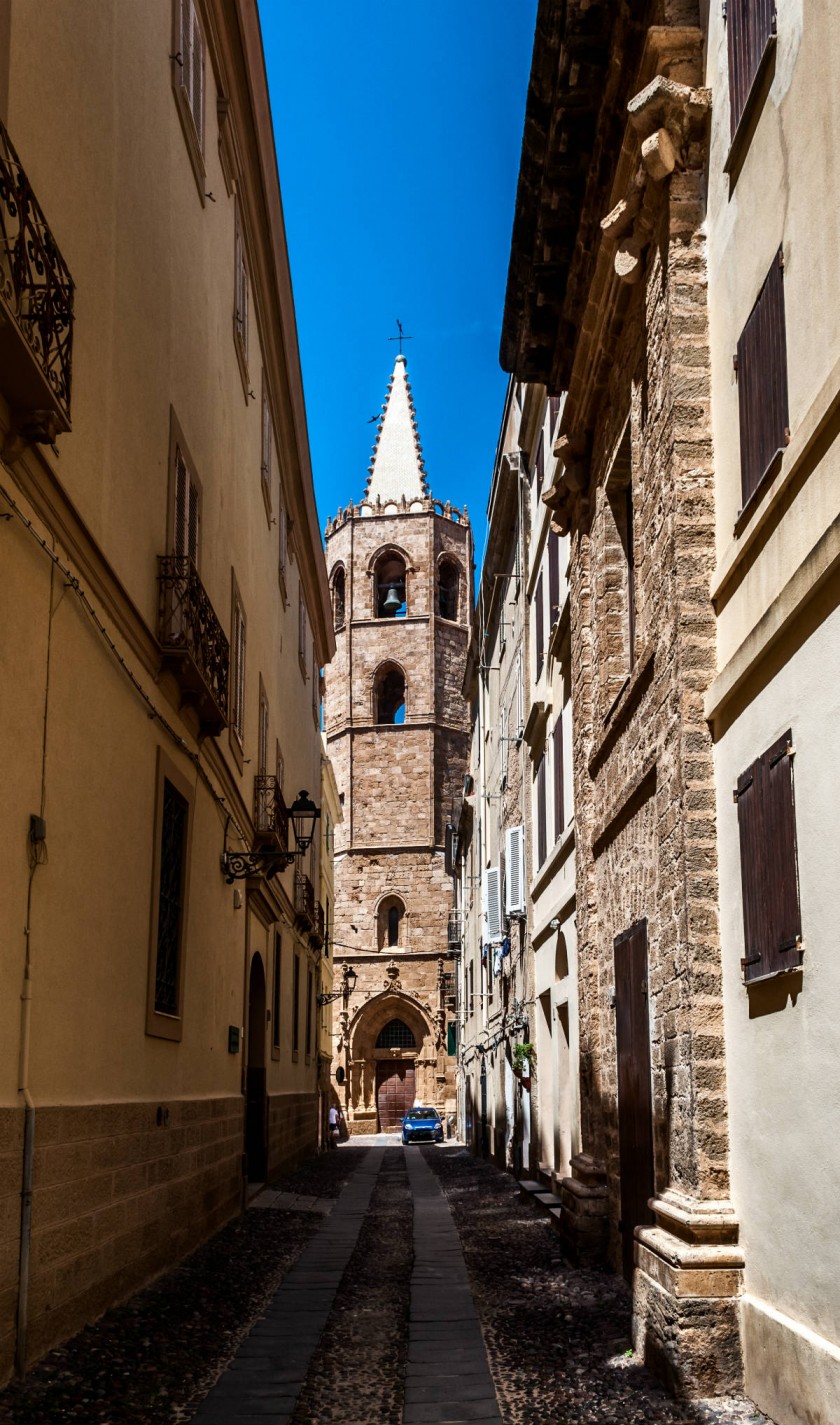 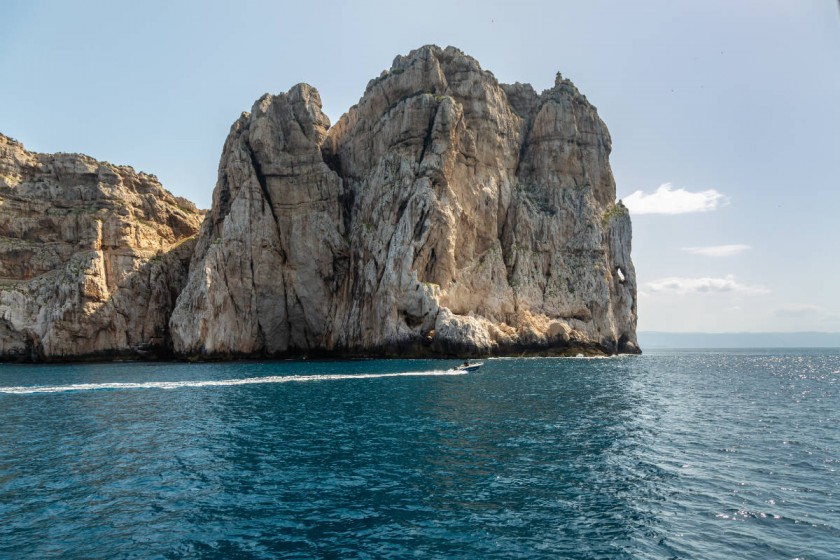 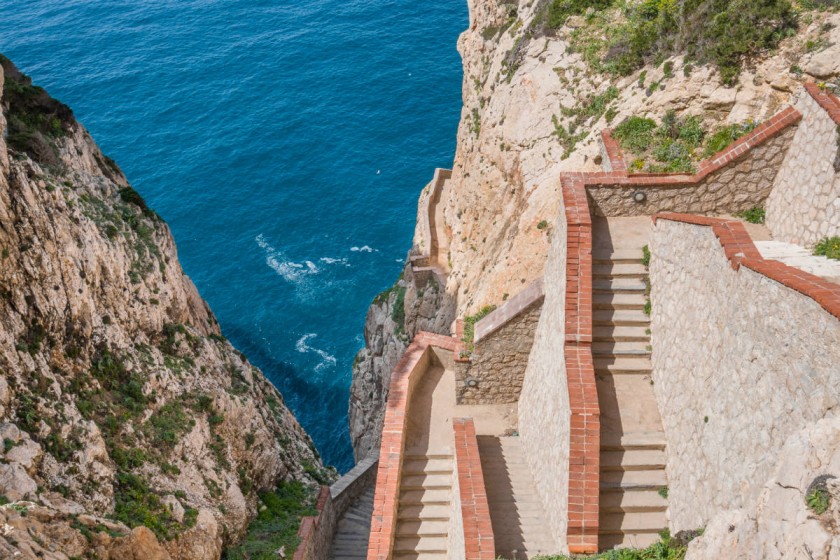 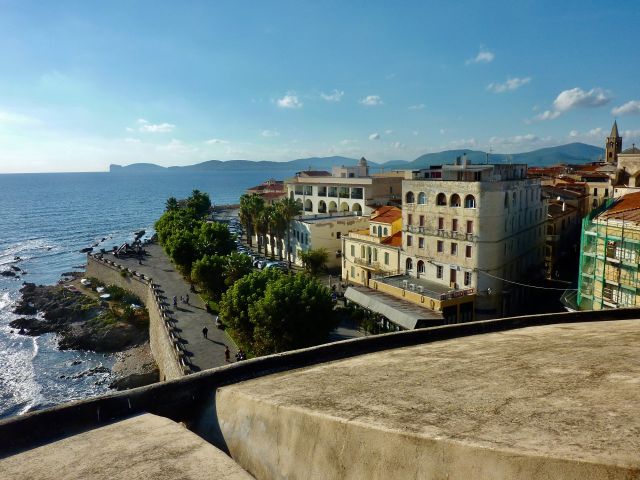 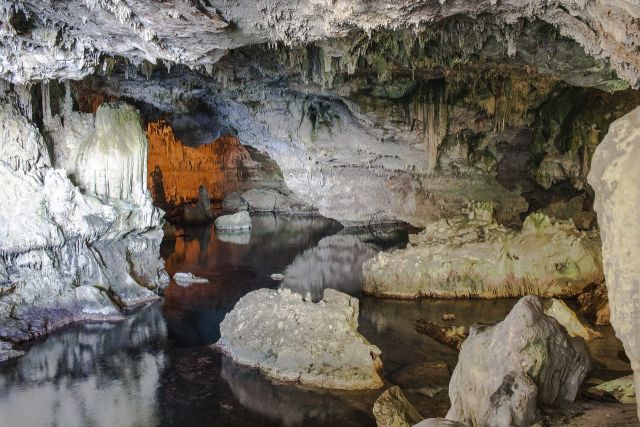 A look at Alghero 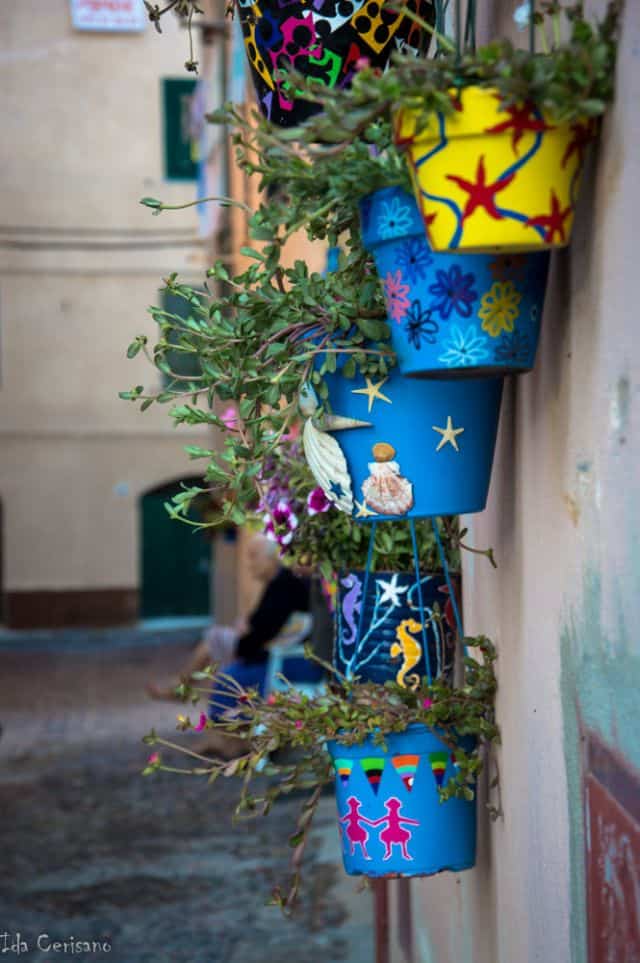 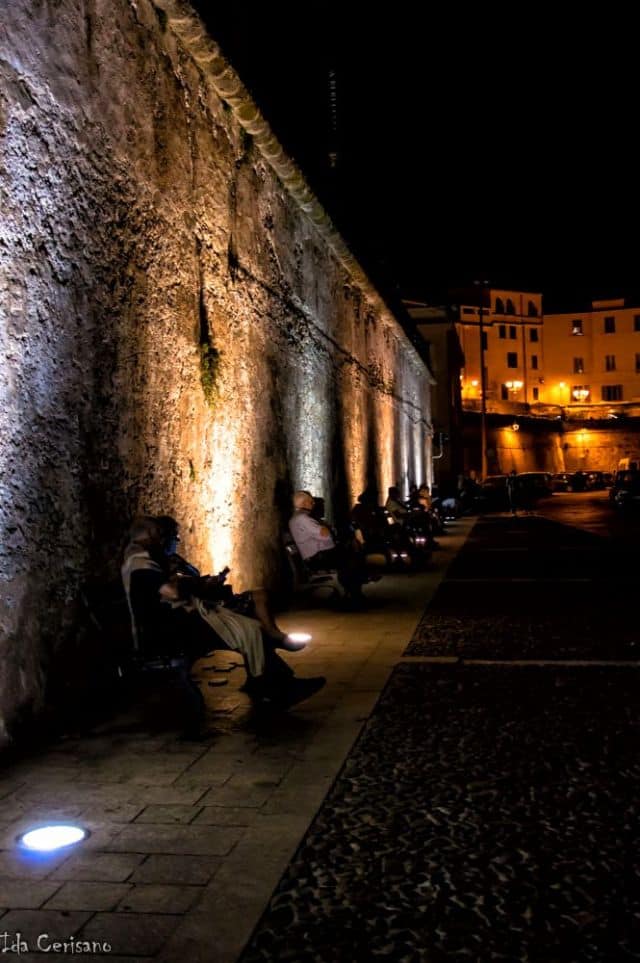 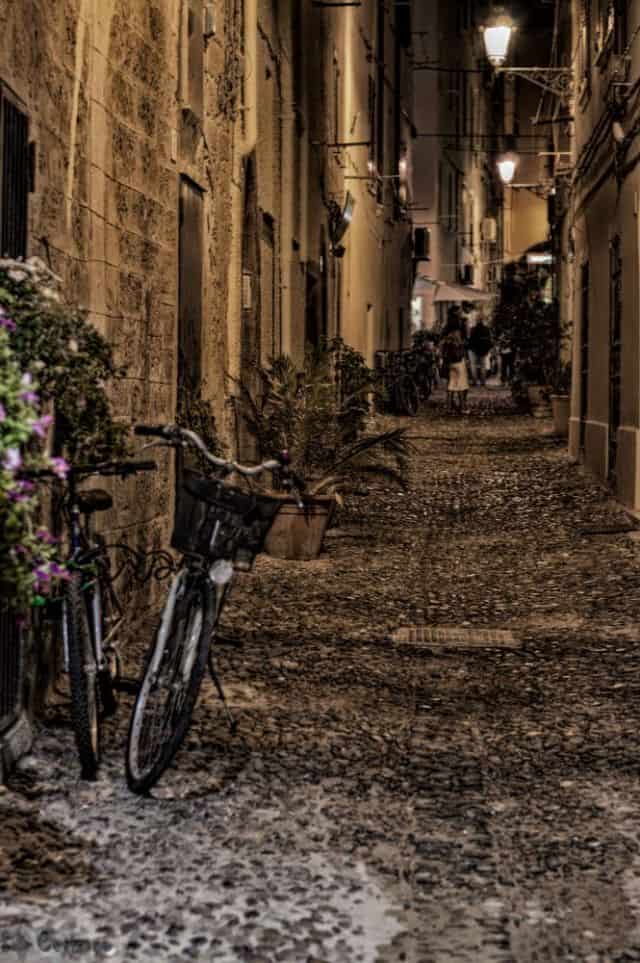 Alghero is a great seafaring village in Sardinia. It is also known as the little Barcelona since it has preserved the use of the catalan, of which it is a linguistic island. It is the Chief Town of the Riviera del Corallo, name that derives from the fact that in the waters of its rada there is the largest amount of precious coral red of the most valuable quality caught by corallari divers, activities that with processing and sale, for centuries has had a great importance of both economic and cultural, so much so that a branch of coral is inserted in the coat of arms of the town. The name derives from Aleguerium (seaweed), for the considerable amount of Posidonia Oceanica which settles on its sandy coastline.

The Grotta Verde, submerged cave on the promontory of Capo Caccia, has been the subject of repeated visits from the Ancient Neolithic period (VI-V millennium B.C.). For the phase of late Neolithic Age (3500 BC-2700 BC) there are underground tombs, such as the domus de janas in groups or in necropolis, including the necropolis of Anghelu Ruju, belonging to the culture of Ozieri.

In the nuragic age the territory of Alghero is intensely populated with 90 nuraghi identified (density 0.40 per km²), about a third of which have disappeared. Most are single-tower and all are constructed in local stone, such as limestone, sandstone and trachyte. There are also several villages, for the most part connected to the nuraghi, where they were found protocorinzie ceramics and Phoenician, a testimony of the commercial relations entertained with the other Mediterranean regions.

The birth of Today Alghero is traced back to the XII century, when the noble Genovese family of the Doria was granted to fondarne the first historical nucleus. The strategic position and the presence of a rich aquifer, witnessed by the pits still present in some houses, allowed the growth of the city and ne ratcheted the strategic importance. For about a century it remained in the orbit of the Maritime Republic; in 1283 the Pisans managed to conquer it and kept it until 1284, when in the aftermath of the pisan defeat of the Meloria, the Doria fell in Alghero.

Ceased the terrible epidemic of black plague that struck also Sardinia in 1347, in 1350 some descendants of Doria sold its rights to Peter IV of Aragon, that he was making geographically the newborn Kingdom of Sardinia, while the remaining descendants ceded its rights to the Republic of Genoa in 1353: this inevitably led to a clash between the two factions, Catalan-aragonese from one side, Genoese, following allied with the from Arborea, on the other hand. In 1355 the village gained the municipal coat of arms.

On 28 August 1501 she was conferred the title of royal city. In 1541, the Emperor Charles V came to visit accompanied by admiral Andrea Doria, noting the qualities that made it so attractive in the past, and coining perhaps the famous expression Sed todos caballeros. In 1652 Alghero was struck again by the plague, brought into the city from a ship Catalan. Some of Alghero emigrated toward other areas of the island hoping for salvation, but obtained the effect of spreading throughout the plague, which hit the Sardinia for four years. In 1720 the Kingdom of Sardinia passed to the House of Savoy, without that this had made changes to the tradition of cultural and linguistic diversity of Alghero.

Alghero counts a natural landscape very diverse, from beaches with fine sand to the cliffs with flat stones or very jagged: is appreciable especially the view from the sea, in so far as it is possible to grasp the variety of its coast mixed with vegetation, the typical Mediterranean maquis and the pinewood that often surround ago; very appreciated for its panorama is the promontory of Capo Caccia with its well known cliff in the shape of a sleeping giant that has become one of the symbols of Alghero, together with the precious red coral.

The area of Capo Caccia with the facing flat island and the gulf of Porto Conte is the site of primary naturalistic interest, in which was formed the natural Area Marina Protetta Capo Caccia - Isola Piana. The particular geological conformation (karstic origin) makes the area rich in caves and ravines, still largely unexplored. Insist here the famous caves of Neptune, accessible from the sea and from the ground (through the famous Escala Cabirol of, 656 steps), and who offers to its inside a panorama of salt and swimming pools, such as the swimming pool of the giant, and stalactites and stalagmites of particular shapes, as component. On the eastern side of Capo Caccia opens overhanging the sea the Cave of the embroideries and the Grotta Verde, reachable only by sea.

In the streets of the village, next to the words in Italian of the toponyms joins often the Catalan words. If in the "new" of the city the toponyms are simply translated into Catalan, the same thing cannot be said of the historical center, in which the terms refer to the cultural tradition of Alghero.

The very central Via Carlo Alberto, for example, in a section thereof takes its name Catalan Carrer de Sant Francesc (road/via di San Francesco), just in correspondence of the homonymous church. The inhabited center of Alghero has a development of coastal type; it is possible to identify two parts. The first occupies the south-central region of the city and constitutes the main core. If observed from the satellite can be noted the strong difference between the fabric of the historic center (located in a pseudo-natural peninsula) and surrounding area, next embodiment and in further development on the guidelines south (road to Villanova) and East (road to Ittiri/Olmedo). The second, instead, is situated to the north and is the hub of tourist residences.

The cuisine of Alghero is based mainly on fish and crustaceans, in particular on the famous algherese lobster, known and appreciated throughout the world.

some typical dishes are the lobster à l'Alghero, the coppazza and spaghetti with sea-urchins and spaghetti alla bottarga, monzette under salt cooked in the oven and the algherese paella, you accompany then to dishes and typical products of the Sardinian cuisine in the north.

Among sweets some of the mostù typical are the burned cream and the milk pudding, better known under the name catalan, menjar blanc.

between the vegetables we remember the coral tomato, Camona tomato and cardi.

between wines in this area, the Alghero DOC e L'Anghelu Ruju, as the vines are around the site Archaeological.

Important also the production of olive oil, which comes from the olive groves of the territory of Alghero.

the Municipality is part of:
Città del vino
Città dell'olio

The Church of San Michele
the church of San Michele is one of the most significant examples in Sardinia of the baroque style.
Largo San Francesco, 14, Alghero
Porta Terra Tower
The Torre di Porta Terra, located in the square of Alghero, has been the main entrance to the cit...
Piazza Porta Terra - 07041, Alghero
Sulis tower
Also known as Torre dello Sperone, Torre Sulis was built in the first half of the 16th century an...
Piazza Sulis - 07041, Alghero
The cathedral of Sant'Antonio Abate
The Cathedral of Sant'Antonio Abate in the village of Castelsardo melts elements of Catalan Gothi...

Via Manganella, 54, Castelsardo (Sassari)
52.05 Kilometers from Alghero
Valley of the Moon
in the valley of the moon, outside Aggius, you can visit one of the nuraghic structures the most ...

Via Pretura, Aggius (Sassari)
75.55 Kilometers from Alghero
Biddas - Sardinia's Abandoned Villages Museum
The Biddas Museum of Sorso, in Sardinia, is the first italian museum dedicated to the abandoned ...

Via Monti di Lizu, 6 , Aggius (Sassari)
75.47 Kilometers from Alghero
MUT Tonnara Museum
The Tonnara Museum of Stintino, in Sardinia, tells of a time that there's no more.

Via Lepanto, 36, Stintino (Sassari)
42.51 Kilometers from Alghero
= distances as the crow flies

Hotel Oasis
A beautiful residence located along the Alghero-Fertilia coastline, a few kilometers from the air...

Loc. Nido D’Aquila snc - 07024, La Maddalena (Sassari)
117.33 Kilometers from Alghero
Bajaloglia Resort
An oasis of wellbeing and relaxation, where the scent of the Mediterranean vegetation will inebri...

Alghero is present in issue 4 of our digital magazine e-borghi travel.
Read it now! 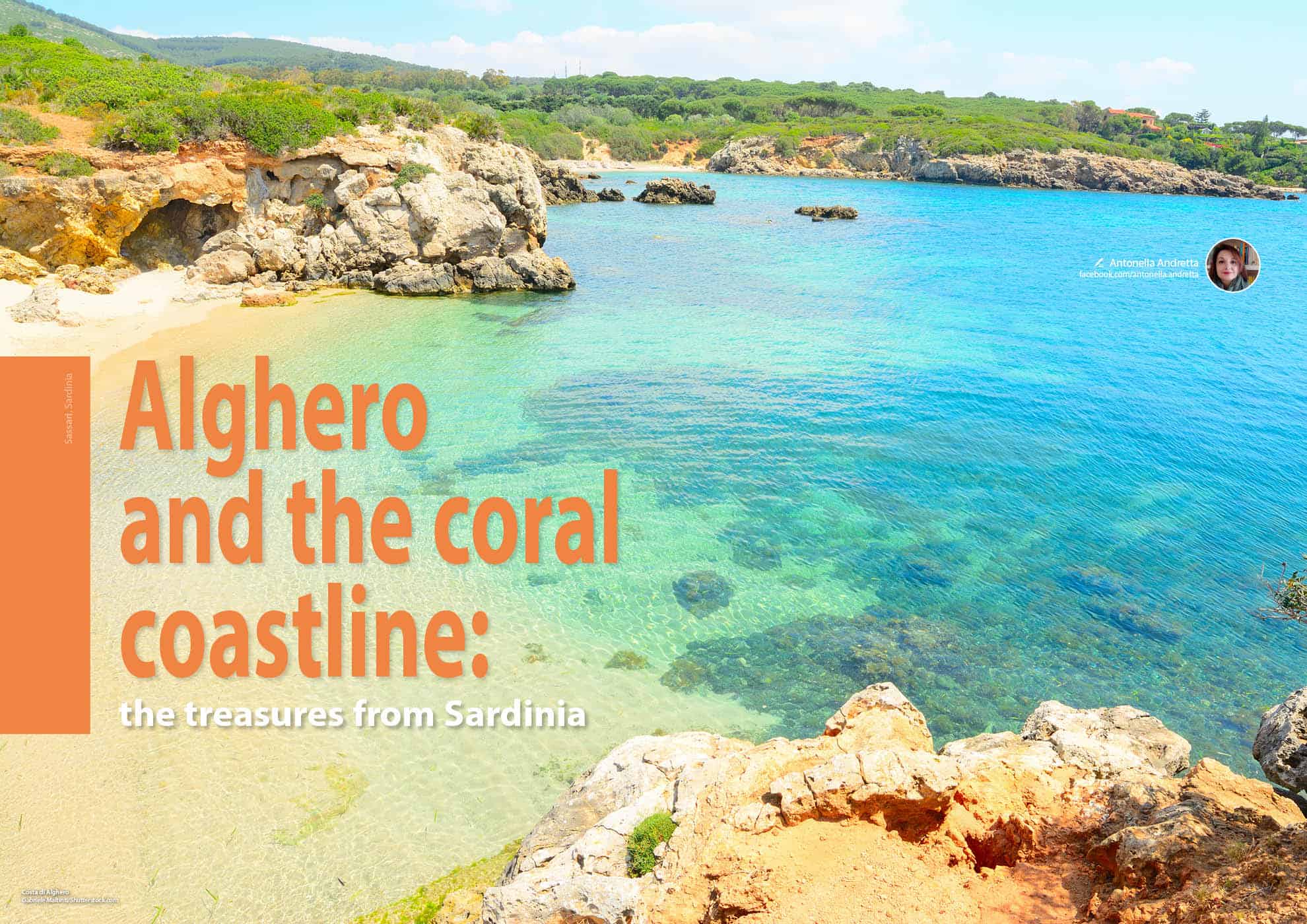 Alghero - The coral coastline: the treasure from Sardinia

Our Lady of Merced

Our news about Alghero