Share
A small fishing village, the village of Cetara is known for the anchovy sauce, an amber liquid obtained from the maturing process of anchovies in salt. A village rich in history, Cetara preserves its monuments intact: the main one is the Viceroyal Tower, built in the 16th century for defensive purposes, stands on the beach of the town with all the charm of its historical significance.

A look at Cetara 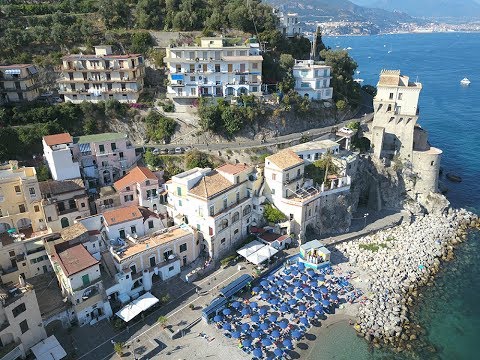 Cetara, a charming fishing village on the Amalfi Coast, is at the feet of Mount Falerio and, due to its extension into a deep valley flanked by vineyards and citrus groves, it takes the form of a fan.

It is an ancient and authentic fishing village famous for the anchovy oil, an amber liquid obtained from the process of maturation of salted anchovies, and for the delicious tuna caught. Its name derives from the Latin "Cetaria", tonnara, and from "cetari", big fish sellers. Today Cetara is characterized by economic and tourist activities mainly based on fishing and currently it has one of the most important tuna fleets in the Mediterranean, boasting close contacts with Nemour in Algeria, with Séte and Marseille in France, where many descendants, established in the first and second post-war years, live and work to carry out their fishing activity. Thanks to the large fleet of cianciole, endowed with the characteristic lampare, Cetara guarantees an abundant catch of blue fish, which is skillfully worked and preserved, in salt or in oil, by small local conservation industries.

The origins of the village date back to the early Middle Ages, when the territory of Cetara, almost uninhabited, belonged to the jurisdiction of the Etruscan city of Marcina, most likely coinciding with Vietri sul Mare, as reported in the "Chronicon Salernitanum".

Cetara, a village rich in history, preserves its monuments. The main one is the Vicereale Tower, built in the 16th century for defensive purposes. It stands on the beach of the town with all the charm of its historical heritage. The Church of San Pietro Apostolo, dating back to the IX century, in Baroque style, is the first inevitable stop to make during the exploration of this magical village.  You cannot miss the Church and the Convent of San Francesco, both dating back to the 1300s. In the Church you can admire enchanting frescoes, while the Convent, consisting of a cloister and several cells, now houses a restaurant and is the seat of the municipality. More recent but no less important is the Church of the Madonna di Costantinopoli, built in 1800 and renovated in 1921 after several damages caused by a violent flood.

In summer, the image that contains the essence of this seaside village is Marina di Cetara, a small beach enclosed between the village of houses and the fishing port. The ideal place to stop for a swim in the clear and calm waters of Cetara. Particularly suggestive and important are the Patronal Feast of St. Peter, accompanied by beautiful fireworks over the sea, and the Tuna Festival, with tasting of typical local fish products.

Patronal feast
San Pietro Apostolo - 29 giugno
Municipality of Cetara
Corso Umberto i 47 - Cetara (SA)
tel: 089262911
Torre Vicereale
One of the tourist attractions of the Amalfi Coast is the Tower of Cetara.
Via Lannio, 2 - 84010 , Cetara
Abbey of Santa Maria de Olearia
The Abbey of Santa Maria de Olearia in Maiori is located along the panoramic road of Amalfi Coast.

Strada Statale Amalfitana, 43, Maiori (Salerno)
2.88 Kilometers from Cetara
Ceramics Museum
The Ceramics Museum of Vietri sul Mare, in Campania, is located in the locality of Raito.

Cetara is present in issue 4 of our digital magazine e-borghi travel.
Read it now!

Recipe: spaghetti with anchovy sauce, a typical dish of the Amalfi Coast
In Cetara, a seaside village on the Amalfi Coast, it is possible to taste the traditional Colatura di Alici, an amber liquid obtained from the maturation process of salted anchovies which in the last ten years has gastronomically characterized the small fishing village.Spaghetti with anchovy sauce are a unique first course of its kind, very simple but with a strong taste.Let's see what we need to prepare it. Ingredients Per 4 persone400...
Continue