Share
In the province of Reggio Calabria there is one of the most fascinating villages in the whole region: Pentedattilo. A small ghost town nestled in the cliff of Mount Calvario from which you can admire a truly unique landscape. There are many stories and legends related to Pentedattilo, that's why, despite everything, it gives suggestive emotions to anyone who takes the time to visit this place where it seems that time has stopped. 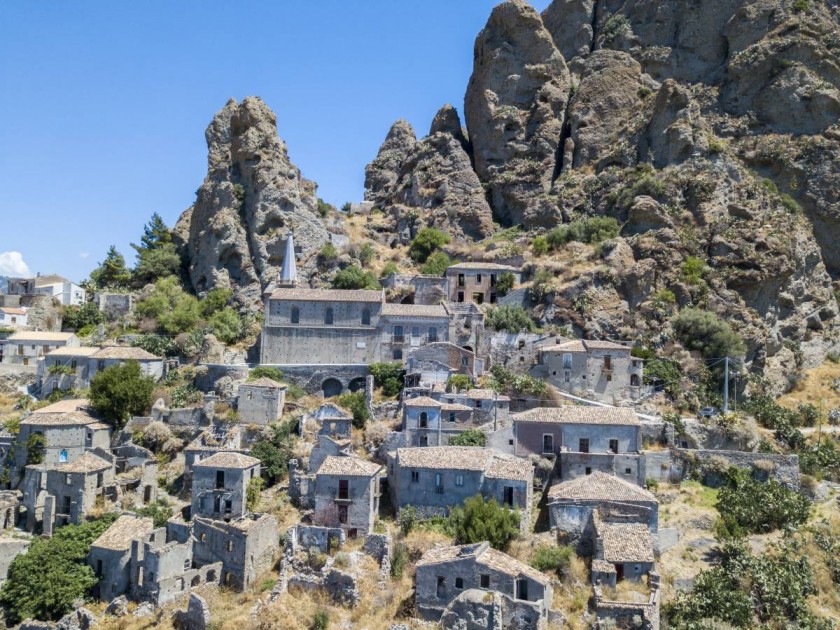 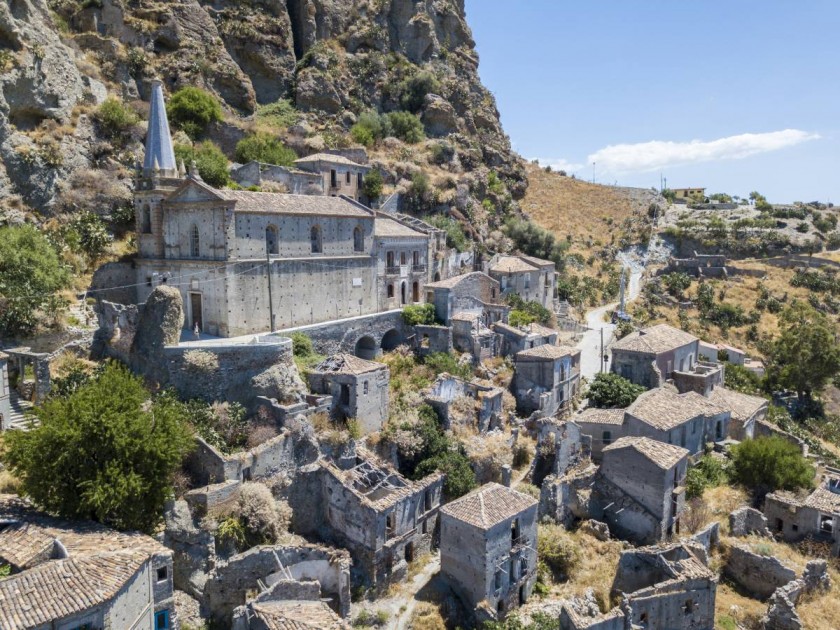 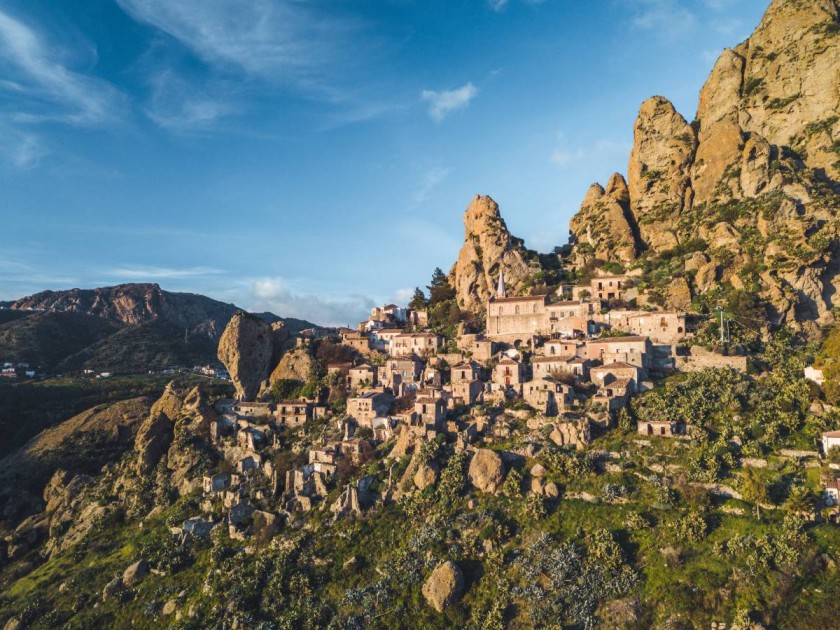 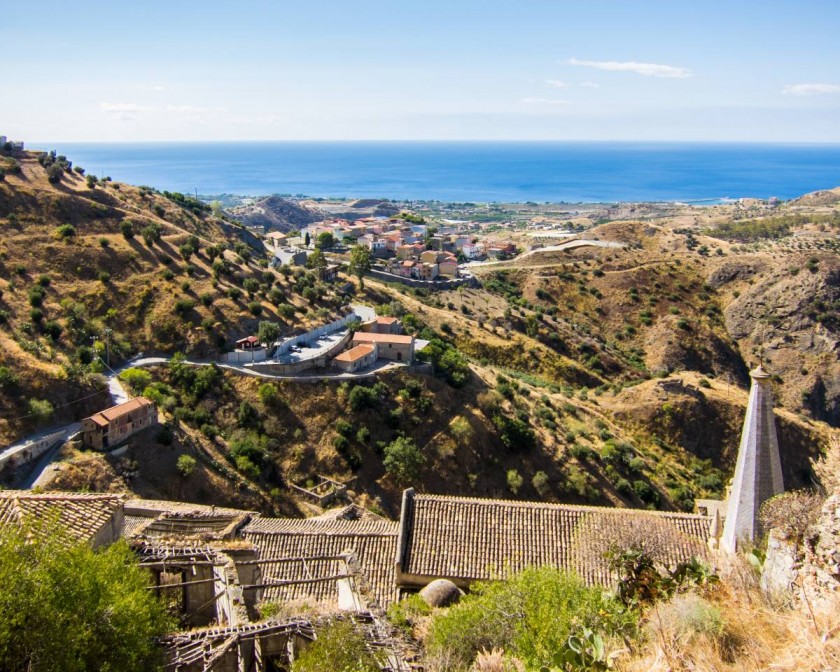 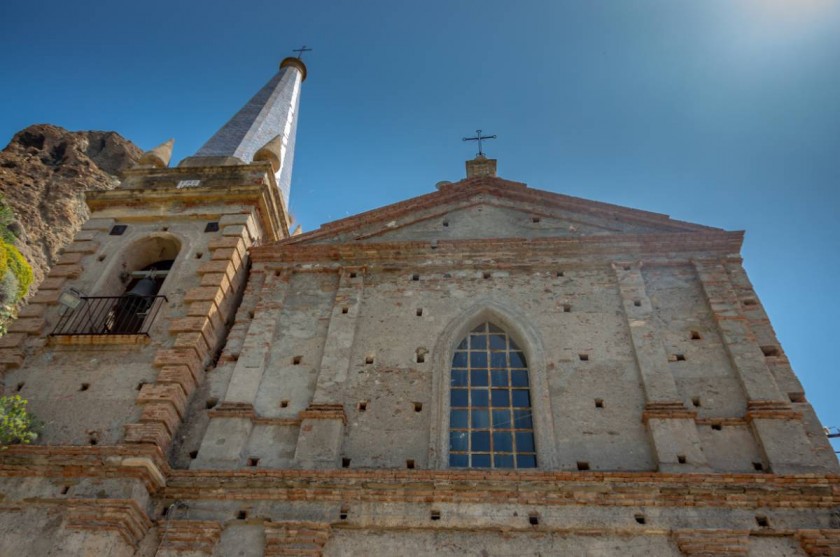 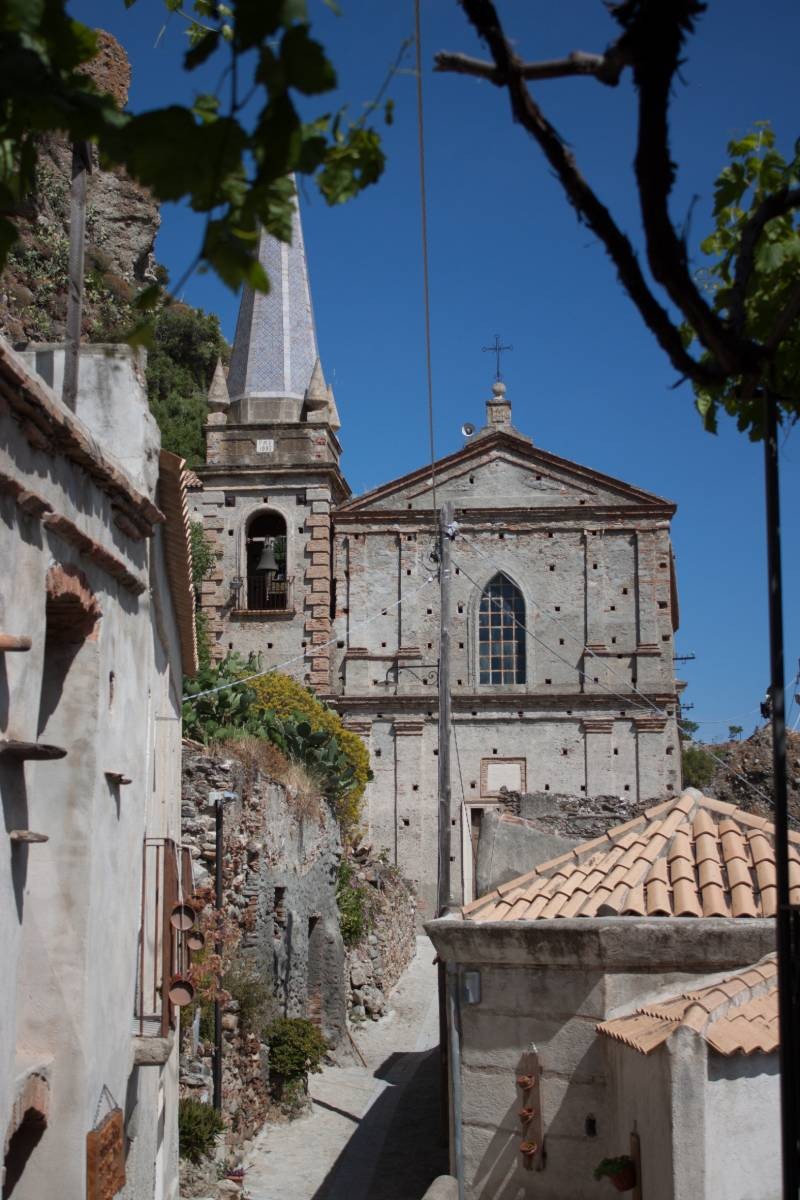 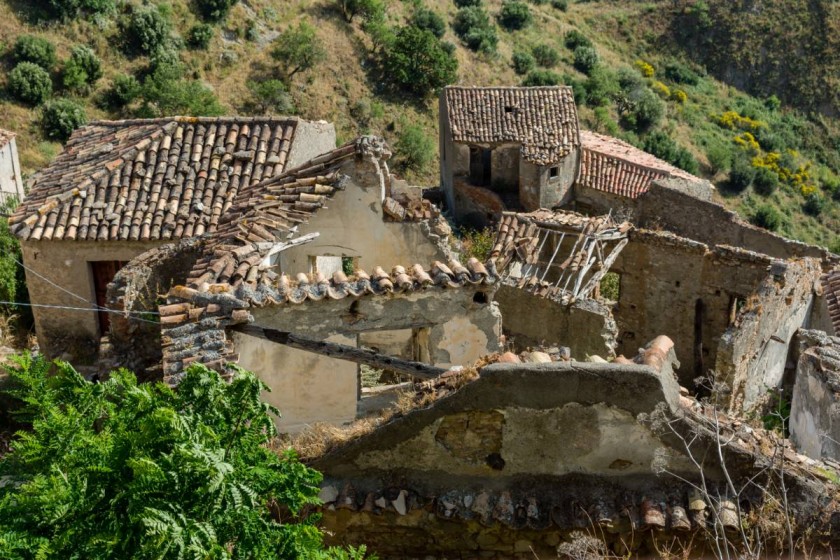 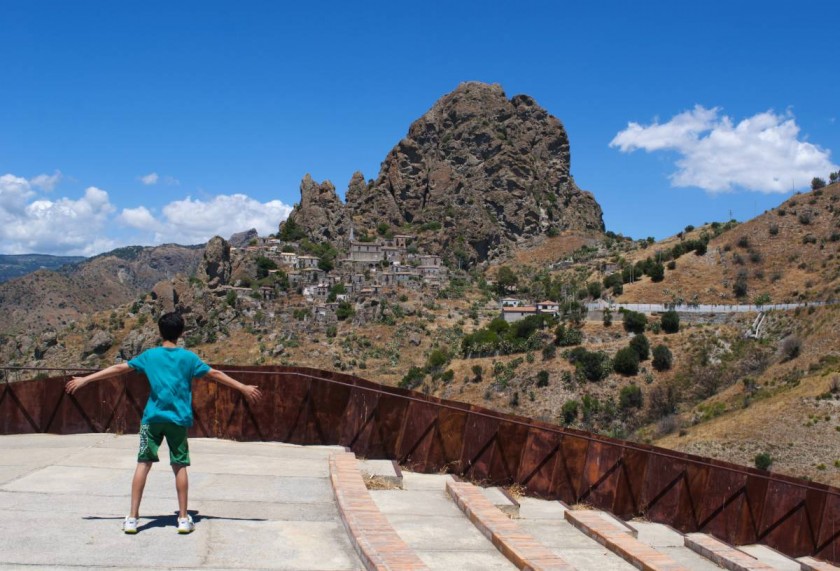 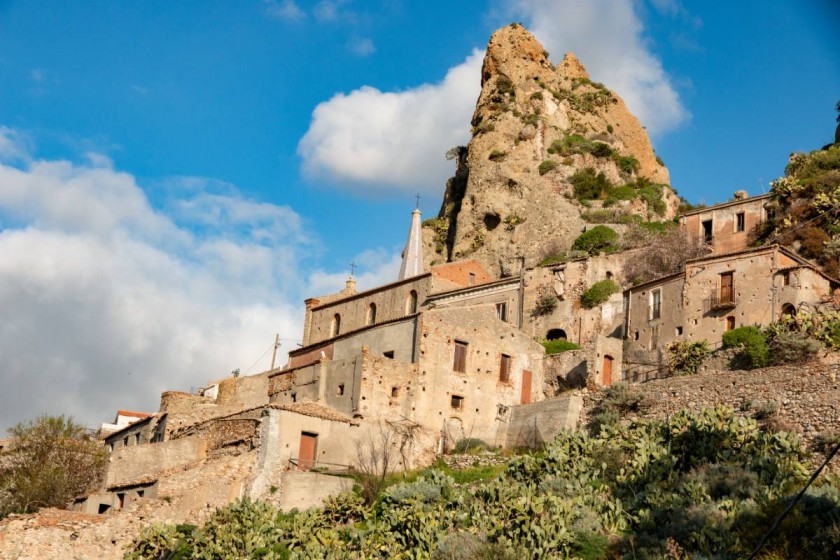 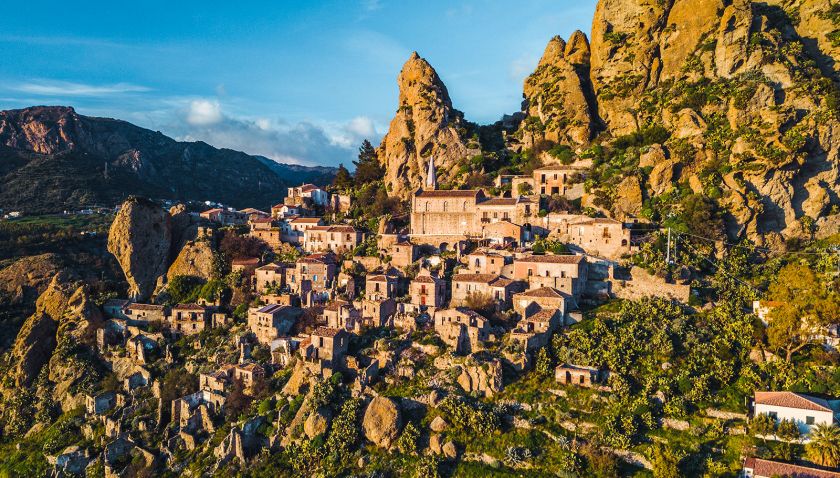 Historical notes and curiosities
Pentedattilo is located in the municipality of Melito Porto Salvo, in the province of Reggio Calabaria, in the beautiful Sant'Elia valley. Its name derives from the union of two Greek words, "penta" and "daktylos" which mean "five" and "fingers" respectively. It was given this name precisely because the protrusion of the mountain on which it stands is reminiscent of the shape of a stone hand with five fingers rising up towards the sky.

The history of Pentedattilo begins in 640 B.C. when a Greek colony colonized the country, making it a rapidly developing economic centre. Later, under the power of the Romans, the village became a perfect military fort to easily reach the mountains of Aspromonte, thanks to its strategic position that allowed full control over the river of Sant'Elia.

After the Byzantine era, the village was bought by several families, passed from the Abenavoli family to the Alberti and this gave rise to great rivalries between them. To put an end to the issues raised between the two families, they decided to marry Alberti's daughter, Antonietta, to Baron Bernardino Abenavoli. Their love, however, was opposed by Antonietta's brother, who immediately accepted the request of the Viceroy of Naples to marry his sister.
When Baron Bernardino discovered the news of the following wedding, his anger broke out and he decided to take revenge on the Alberti family and kidnap Antonietta. So on the night of Easter 1686, Bernardino and his men raided the Alberti castle and exterminated the whole family, even women and children. They only spared Antoinette and her betrothed, whom they took hostage as collateral. The Viceroy of Naples, Cortez learned of the incident and sent some of the men in his army to take revenge and free his son from captivity.
Cortez's troops beheaded the men who had participated in the massacre of the Alberti family and hung their heads on the parapet of the castle. In the meantime the Baron managed to escape, forced Antonietta to marry him and then hide her in a cloistered convent. Then he took refuge first in Malta and then in Vienna where he died fighting on an Austrian ship.

This story has given rise to various legends and therefore to the mystery of Pentedattilo. In fact it is thought that some presences of the exterminated family are still wandering the streets and that during the nights of strong wind, you can hear the cries of pain of Alberti. Another legend concerns the rock that resembles a hand. It is called the hand of the Devil and represents the hand of the baron who has shed blood.
Unfortunately, over time the village has been increasingly abandoned by its inhabitants because of the frequent natural disasters that hit it. Until the sixties when the town ordered the few remaining citizens to clear the place for good due to the slow landslide of the mountain. Today, however, Pentedattilo is living a second life thanks to the various initiatives to enhance the territory.

In the village of Pentedattilo you can visit the ruins of the Castello degli Alberti. Where once stood the residence of the Alberti family, today only the ruins surrounded by greenery are left. Also not to be missed is a visit to the Church of San Pietro e Paolo where the tombs of the Alberti family and an ancient organ dating back to 1700 are placed. Another church to see is that of Candelora, where there is a statue of the Madonna and Child.
If you prefer to learn more about the traditions of Pentedattilo, you can visit the Museum of Popular Traditions.
Inside there are typical objects of the ancient rural life. Instead, to find out by what means the essence of Bergamot is extracted, you can see the Bergamot Museum or Bergamot Shop, where you can also buy Bergamot products.

What to do in the village
One of the first things to do when you arrive in Pentedattilo to enjoy the magical atmosphere of this place, is to walk along the narrow streets stopping maybe to look at all the apartments that in the past citizens have abandoned, transformed into small craft shops and shops of typical products.

A naturalistic trekking route that you absolutely must not miss is the one that leads from the village of Pentedattilo to the Rocca di Santa Lena. The Rocca is a rocky wall behind the village. Once you have completed the ring-route and reached the main point, you can enjoy a magnificent view of Mount Calvario and Mount Etna. You can also try your hand at sport climbing so you can admire an even more complete panorama of the surrounding beauty.

If you plan to visit Pentedattilo in the summer, you can participate in the itinerant ethnic festival Paleariza, to better understand the ancient Greek-Calabrian culture.
Finally, given the natural beauty of the village, among the initiatives that characterize the place, there is Pentedattilo Film Festival. It is the international festival aimed at short films that every year attracts more and more tourists.
To conclude, an additional motivation to visit Pentedattilo is the typical cuisine. The little restaurants offer an authentic cuisine, simple but rich in taste, able to give visitors an authentic experience, just as the village of Pentedattilo is authentic.

Via Vescovado, 20, Bova (Reggio Calabria)
15.66 Kilometers from Pentedattilo
Norman tower
The Norman Tower of Bova dates back to the 11th century. placed to guard one of the four access g...

Via Sant'Antonio - 89033, Bova (Reggio Calabria)
15.67 Kilometers from Pentedattilo
Path of Peasant Civilization
The Path of Rural Life, in Bova, is an open-air museum with ancient millstones, oil mills, millst...

Via Spirito Santo, 10 - 89033, Bova (Reggio Calabria)
15.67 Kilometers from Pentedattilo
Church of San Leo
the Church of San Leo, in Calabria, is dedicated to the patron saint of the village of Bova.

Via Nazario Sauro, 23, Gerace (Reggio Calabria)
53.52 Kilometers from Pentedattilo
Norman tower
The Norman Tower of Bova dates back to the 11th century. placed to guard one of the four access g...

Via Pirgoli, 89033, Bova (Reggio Calabria)
15.67 Kilometers from Pentedattilo
Church of San Leo
the Church of San Leo, in Calabria, is dedicated to the patron saint of the village of Bova.

Via Concezione, 4, Bova (Reggio Calabria)
15.76 Kilometers from Pentedattilo
Catholic of Stilo
A small Byzantine church dating from the 9th-10th centuries, the undisputed symbol of the village...

Via Cattolica, 89049, Stilo (Reggio Calabria)
85.10 Kilometers from Pentedattilo
Castello Ruffo
The Ruffo di Scilla Castle is one of the most characteristic and typical elements of the landscap...

Via Duomo, 28, Gerace (Reggio Calabria)
53.41 Kilometers from Pentedattilo
= distances as the crow flies

Find where to sleep in Pentedattilo

Via Parco, 1, Scilla (Reggio Calabria)
34.57 Kilometers from Pentedattilo
= distances as the crow flies
Il Tipico Calabrese
A small family business founded in 2004 with the aim of enhancing the cultural, craft and gastron...

Via Torrente Sant Agata, 53/a - 89060, Cardeto (Reggio Calabria)
14.66 Kilometers from Pentedattilo
= distances as the crow flies

Discovering the tip of Italy
Travelling in the Reggio Calabria metropolitan area is like plunging into the heart of the Mediterranean, which has always been a crossroads of peoples and cultures. An experience with many nuances, to be lived in contact with nature and discovering the countless cultural resources and traditions. To get to know its territory better - the area includes 97 municipalities, with villages of great historical and architectural interest - you need o...
Continue
Video: from Reggio Calabria a journey through the villages and the beauty of the territory
Visiting this city means discovering the true face of Calabria, with the cultural incursions that it still receives from nearby Sicily and a palette of natural colors unique in the world. Once in the city, the first stop is the National Archaeological Museum of Reggio Calabria which houses the famous Bronze of Riace, found in 1972 in the bay of Riace and which has become a symbol of the region. After the visit, you can take a walk along the se...
Continue
The 10 most beautiful villages set in the rock
The Italian territory is rich in wonderful landscapes. Some of the places able to combine history and charm are the villages. From north to south, the villages are numerous and scattered in every region. They can be found in the most varied places: from islands to inland areas, from lakes to mountains, from hidden bays to jagged cliffs. But each of them is capable of making anyone who takes the time to visit them fall in love. Among the most c...
Continue
Calabria: The Landscapes of Contemplation
Piminoro in Aspromonte - Photo by Aspromonte Wild “… what a wonderful land! What refreshment for your soul!”, this famous quote by the Russian writer N.V. Gogol perfectly describes the sentiment that Calabria and its landscapes is unleashed in the visitors’ eyes. That’s what happened to the well-known German director Wim Wenders who was completely lost in the beauty of the Calabrian landscapes, he ca...
Continue
Rosazza, Pentedattilo and Craco: a tour in the name of mystery
In its territory Italy can boast not only tourist destinations of incredible historical, artistic and cultural charm, but also places that can excite for their mysterious past and legends that are lost in time. The Masonic and esoteric mysteries of Rosazza in PiedmontIn the province of Biella, in Piedmont, there is the small village of Rosazza which has only 90 inhabitants, but is often defined as the most mysterious town in...
Continue
5 villages with ghosts and witches for Halloween
Five villages to be discovered during Halloween, atmospheres full of charm and mystery, spirits that linger in castles and witches who wink from the darkness: 1. Triora (Imperia) It is par excellence "
Continue
Welcome 'to' Reggio Calabria: Magna Graecia at the tip of the boot
Reggio Calabria - synonymous with ancient history, entertainment and good food - is undoubtedly one of the jewels in the crown of the Italian peninsula. With its Riace bronzes, Greek walls and numerous archeological sites, Reggio Calabria is a must-see destination for anyone wishing to immerse themselves in ancient history, particularly that of Magna Grecia. Reggio Calabria is a place to visit if you want to immerse yourse...
Continue