Share
Located within the Aspromonte National Park, the village of Gerace still retains its medieval appearance. The country is closely connected to Christianity, in fact it is full of churches and monasteries. 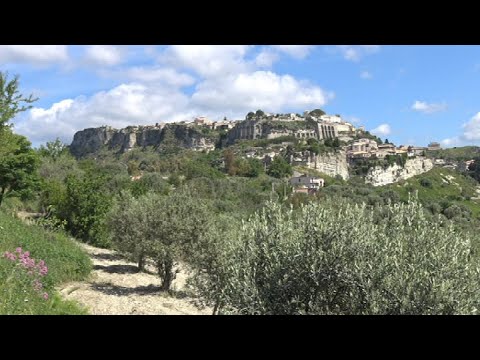 From its sandstone cliff, Gerace (Iracax, Jèrax in Greek-calabria, Jeràs in Calabria) enjoys an exciting panorama of the entire Locride region of Calabria. The village, which still maintains the medieval urban setting, is located within the Aspromonte National Park. The historic center is full of churches, old buildings and rooms, once dwellings or shops, dug directly into the rock.

The village's history is closely linked to that of Locri Epizephiri. In fact, despite the fact that there are traces of attendance in the pre-Greek, Greek and Roman times, the settlement develops only after the abandonment of the town of Locri, which took place from the seventh century AD, due to the ever-increasing pirate danger and the ever-growing insolubility of the coasts. This movement of the Locresi is also closely related to the name of the village, which in spite of the legends that want it to be linked to a legendary sparrow, in Greek Iraca, Ιέραξ, who would drive the Locresi, chased by the Saracens, towards the fortress, seems to depend on the name of the Diocese of Locri, dedicated to Santa Ciriaca (Agia Kiriaki, Agia Ciriaci, Αγία Κυριακή in Greek). That Gerace has always been closely linked to Christianity is evident from the innumerable presence of churches and monasteries also infra muros, which has helped to identify the rock as a sort of Monte Santo.

Because of its particular position, the village soon became a center of outstanding importance in Southern Calabria. The possibility of controlling the coastal trades and its particular orographic shape made it an attention to both the Byzantine Empire and the kingdom of Sicily. The joint presence of these powers allowed Gerace to withstand Arab attacks and maintain some autonomy over the Normans. Testimony of this importance is the great and exceptional (for quality) amount of ecclesiastical and lay architectures, the result of imperial commissions (Chapel of St. Joseph in the Certainly Swabian Cathedral), gifts (think of Norman interventions in the Castle, in the Cathedral and in other churches scattered inside the walls or the Church of St. Francis, wanted by Charles II of Anjou in 1294), princesses and feudal lords.

This rich history of art can still be read today in its squares, alleys and walls. The sumptuous palaces that embell it are almost always provided with stone portals made by local stonecutters and, although often resulting from nineteenth-century restorations, following the damage caused to the city by the earthquake of 1783, often repeat volumes of a medieval stage ( XIII-XV century); it is not unusual to find underneath modern plastering traces of double-sided windows, bare arches, stilted windows that denounce a major construction activity already in the 12th century.

They definitely deserve a visit to the castle, the cathedral, the church of St. Francis. Inside the alleys there are numerous arcs to "turn to right", built with a typical technical technique of the place. The technique was to construct the arc by making a lime jar on a twisted rod structure in the same way that the typical baskets called "righteous" are intertwined. Of the twelve doors that originally opened on the walls of the historic core of the country, only four of them survived: the Doors of the Bishops or of the Meridiana, near the Santa Lucia Cathedral-Porta Maggiore-Door of the Sun. Of particular importance is the public space represented by Piazza del Tocco, which overlooks some of the noble palaces, including Palazzo Calcheopulo, Palazzo Migliaccio and Palazzo Macrì. In the ancient village there is also an ancient fountain of 1606 with its aqueduct. Near the town, finally, the remains of a necropolis were discovered, witnessing three different epochs: ceramics from the 9th century BC, crates dating from the 7th century BC and various furnitures of Greek and Italian origins dating to the 7th century BC

Among the most traditional and renowned activities are handicrafts, which are distinguished for the work of terracotta, aimed at the realization of artistic tablets inspired by Greek culture.

Geracese cuisine, like all Calabrian cuisine, is made of intense flavors. In the restaurants you can taste different dishes: from a thousand ways of cooking pork to homemade pasta with goat sauce.
Commonly used: aubergines, courgettes and stuffed peppers; peperonata, wild asparagus omelette, wild chicory, characteristic soups. Excellent cheeses.

Among the desserts: sammartine (based on pastasfolgia, dried figs, almonds, walnuts and muscat wine), the Easter sgute with characteristic shapes; pignolata (fried sweet dough balls wrapped in honey), nocatule (special fried donuts), zeppole, nougat and fruit ice cream. Typical local sweets are represented by the cicerata (made from boiled chickpeas, honey and cinnamon) and by the rafioli made from many eggs and flour that were prepared in ancient times for the wedding. Good production of olive oil, wine. On the other hand, the production of Gerace's Greek wine is limited.

Village of Gerace
Municipality of Gerace

Cathedral of Santa Maria Assunta
the Cathedral of Santa Maria Assunta of Gerace is one of the most important Norman constructions ...
Via Duomo, 28, Gerace
Church of St Francis of Assisi
The Church of St Francis of Assisi is located in the three churches square of Gerace, in Calabria.
Via Nazario Sauro, 23, Gerace
Norman Castle
The Castle of Gerace rises on the highest point of the village.
Viale Castello-89040, Gerace
Greek-Calabrian Language Museum 'Gerhard Rohlfs'
Museum of the Greek-Calabrian language allows you to get to know the Greek-Calabrian language, it...

Via Vescovado, 20, Bova (Reggio Calabria)
39.73 Kilometers from Gerace
Church of Santa Maria di Portosalvo
The church of Porto Salvo, in the center of Chianalea, is a beautiful example of eighteenth-centu...

Via Prof.Giuseppe Zagari, 11 - 89058 , Scilla (Reggio Calabria)
43.91 Kilometers from Gerace
Castello Ruffo
The Ruffo di Scilla Castle is one of the most characteristic and typical elements of the landscap...

Piazza S. Rocco - 89058, Scilla (Reggio Calabria)
44.05 Kilometers from Gerace
Norman Castle
The Norman Castle of Bova , in Calabria stands at the top of a rocky spur, dominating the village.

Via Castello, 33, Bova (Reggio Calabria)
39.59 Kilometers from Gerace
Norman tower
The Norman Tower of Bova dates back to the 11th century. placed to guard one of the four access g...

Land of legends, sea and lots of sun, Calabria in 5 extraordinary stages
When we talk about Calabria, our thoughts immediately turn to the splendid panoramas, the miles of jagged coastline and a sea of the most varied colours, which brings back the happiness of carefree days spent on holiday. And yet the tip of the Boot is not only this, but also thousand-year-old history told by the many villages that animate the region and that seem to bring back to a past full of splendor.Legendary villages immersed in the sea, ...
Continue
Reggio Calabria: weekend between Bova and Gerace.
It is from the city of the strait, on the Calabrian shore, where begins the weekend to discover the villages of Bova and Gerace. Let's depart from what Gabriele D'Annunzio defined as "the most beautiful kilometer of Italy", the promenade of Reggio Calabria, at Bova's turn, after a sweet breakfast with almond paste. It is the Ionic estate, which runs from Reggio to Taranto, to give us breathtaking scenery on the southernmost Italian seas,...
Continue
Recipe: Cuzzupa, the typical Easter cake of the Calabrian tradition
The Cuzzupa is a typical dessert of the Easter tradition that symbolizes the end of the Lenten fast and the resurrection of Christ, represented by the presence of whole eggs, which are said to bring good fortune. The origins of this dessert are lost in the mists of time, in fact it was prepared even before the advent of Christianity and seems to come from the lands of the East. The name itself seems to derive from the Greek word "donut" (koutsoupon), a shape that is sometimes given to it. In fact, the Cuzzupa does not ...
Continue
Calabria of the villages, cribs and fairy tale places
The Calabrian villages as unique places, "intertwined" to the "people" who live there and animate them, but also as "places" of experimentation for new forms of hospitality, entertainment and sociality, destined to a tourist demand now very far from the patterns of mass tourism. The Villages of Calabria, also and however, as an extraordinary opportunity for growth for the territory and for the wellbeing of the local populati...
Continue