Share
It is the country of the Murals, works of art of extraordinary beauty that tell the tourist of Satriano di Lucania everyday life, popular beliefs, details of the life of the painter known as the Pietrafesa originally from the town of Melandro. The historic center presents itself to the visitor as an open-air art gallery, amidst an intricate succession of violets on which noble palaces date back between the 17th and 18th centuries.

A look at Satriano di Lucania 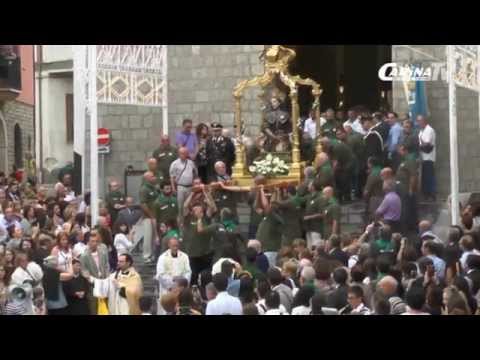 Satriano di Lucania took this name only in 1887 to reinforce the historic ties with the ancient city of Satrianum, the ruins of which are located nearby.
It was also added 'di Lucania' to distinguish it from the homonymous villages and strengthen the geographical meaning, because belonging to this historic region.

In the Eighties became the capital of the murals of the Mezzogiorno, for the presence of more than 500 murals scattered on the walls of the historic center. It is the seat of the academy of the chili lucano, autochthonous spice of the valley of the Melandro, and gave finally the birthplace of the painter lucano of seventeenth century Giovanni De Gregorio.

The village is dominated by mount on which it stands today the ancient Norman tower of Satrianum. Develops on the slopes and the faldi three rocks: the Castle, the Piesco and the Madonna della Rocca, which lie above the shores of the river Melandro.
From here passed along the route of the ancient via Herculea, roman road that acted as a link between the Via Appia and the Pompilia, enabling you to reach also places so interiors and rugged. At the bosco supports to the south of the country, there are some artificial lakes, where it is also possible to practice sports fishing.

The site of the ancient Satrianum always played a strategic position along the path that put in connection the ionian coast with Tyrrhenian coasts, a crossroads of peoples and cultures also very different between them. The phenomena of anthropization back to the Bronze Age, with a continuity of occupation of the territory that goes up to the Early Middle Ages. In the XII century abuts a phase of great importance of the site.
In the XII century the ancient "Pietrafesa" stood on a rock called "Castle", and together with Satrianum was part of a unique countryside. Was the domain of the family Pietrafesa that assumed properly the name and made him autonomous from the county of Satrianum which subsequently, and for order of Queen Giovanna was attacked and destroyed in order to take revenge on people because of an affront immediately. Should be considered in this scenario of atrocities territorial and state-owned the strong contrast of people pietrafesano first against the nobles and the clergy and later against the new middle class of owners who was replaced to the domain of the rich feudal lords.
In the meantime, the inhabited center continued to expand by bringing its boundaries beyond the shores of the river Melandro and by resting on the other two "rocks": the Piesco and Madonna della Rocca. This is the golden period of growth of the village in the middle of 1800 the population touched the 3000 inhabitants and despite earthquake of 7 years after the demographic aspect had not, fortunately, serious repercussions.

Certainly worth a visit the Museum of Peasant Civilisation, multimedia that 'the stage of colors', hosted at the Rocca Duke of Poggiardo and Pepem Fabuleum, multimedia exhibition dedicated to the chili pepper.

The Murals also represent the true symbol of the village. Born in the last century, conditioned by the cultural heritage left by Giovanni De Gregorio, these true and own frescoes, are hand-painted and represent the culture and the traditions modern and advance of the small medieval village.
The paintings deal with six different thematic lodgings: the cult of the saints made around the mother church; the colors of the valley along corso Trieste; biodiversity and archeology in facades that surround piazza Umberto I; the legend of the mop of Abbamonte; the ancient trades together with those relating to the life of the Pietrafesa, the painter who has had the natali precisely in town.

The satrianese Carnival is one of the carnivals of the Lucan tradition is celebrated through the three masks local typical: the hermit, the bear and the Lent. These figures are going around to ask for donations and gifts to the homes of the people throughout the period of Carnival.
Are characterized by different behaviors from each other: the bear usa intimidate the loop with their bells and its tonnage while the hermit punzecchia annoyingly with his stick of brooms.
Lent instead, character is certainly more passive in comparison to the other two, walk undisturbed for the streets of the town with a cradle on the foliage, to represent the carnival finished now. The event launches a message ecologist: re-establish a relationship ancient with ground based on respect. Everyone can join the carnival and for one day can become a Rumita or an inhabitant of the woods (goblin, fungus, leaf, wolf, etc.) without limits to the imagination and creativity.

The typical cuisine of Satriano is characterized by simple products, poor, skillfully processed by the women of the village and then processed in savory dishes from a culinary tradition centuries old. Among the first course dishes typical we find the cavatelli handmade, orecchiette and fusilli accompanied by a tasty sauce of local sausage and some grated salted ricotta. Very good are also the tagliatelle "La'aned" with beans or chickpeas, and soup of cabbage with the ham bone. A flat characteristic are the ravioli filled with ricotta, eggs, local cheese, salami, asparagus, dress with sauces and dressings of various kinds.

The second course dishes are mainly roasts: delicious and genuine meat of lamb and kid, but also rabbit, veal or pork. The skill of Satriano di Lucania is stuffed rabbit "lepr chin". As seconds are also served the sausages (sausage, soppressata, capicollo, bacon) and dairy products (mozzarella, caciocavallo, provolone, Toma, fresh ricotta and salty). Particularly appreciated are the omelet with the "Lampascioni" and omelet with wild asparagus, natural, local products traditionally collected in the fields. Very popular is the use of sweet peppers and peppers: are the famous "peppers cruschi", dried peppers from toss and nibble. The peppers are also preserved in vinegar, to then be prepared with a filling of breadcrumbs, garlic and anchovies. A product highlights of satrianese tradition are the "patat hrell": potatoes boiled and seasoned with oil or lard, garlic and chili pepper.

Among the main dishes we find the Acquasale (Rustic tomato soup) and the "P'zent" with cabbage, a typical local sausage, similar to the sausage, so called because it is made with meat innervated (deemed to be of a lower quality) and rind: is made to cook together with cabbage alongside the embers of the fireplace and in a typical earthenware pot, the "pignata". To eat very warm and flavored with pepper and garlic. The Acquasale (Rustic tomato soup) instead is a recipe poor tradition, simple in preparation and at the same time tasty. In a pan put together oil, garlic and chili pepper, then add the water and bring to the boil. Once ready it is poured on top of slices of stale bread, adding maybe a nice sprinkling of salted ricotta.

Among the typical sweets include the knuckles, toads, the "zeppl" of San Giuseppe and sweet ravioli, dumplings with sweet chestnut flour, called "b'cnott". The bakery products are: bread, biscuits, freselle, taralli, often flavored with wild fennel seeds. The typical recipe Pasquale is the characteristic "Pizza Chiena": a rustic pizza salted made with dough cheese, Toma, eggs and sausage.

St. Andrew's Cathedral
The Renaissance Cathedral of St Andrew the Apostle is located in Venosa, in Basilicata.

Piazza Umberto I, 5, Viggianello (Potenza)
73.95 Kilometers from Satriano di Lucania
Norman Castle
The castle of Melfi is the symbol of the town and is considered one of the most important medieva...

Via Normanni - 85025, Melfi (Potenza)
50.45 Kilometers from Satriano di Lucania
House of Quinto Orazio Flacco
The so-called Orazio's House is situated in the village of Venosa, in Basilicata.

Via Castello, 2, Maratea (Potenza)
62.20 Kilometers from Satriano di Lucania
Jewish Catacombs
The catacombs are located on the hill of Maddalena near Venosa, in Basilicata.

Agriturismo Fattoriabio
Via Diocesi di Satriano, 16 - 85050, Satriano di Lucania
B&B La Voce del Fiume
An intimate environment, with an awakening between the scent of homemade cakes and going to sleep...