Share
Small medieval village, Acerenza is called "cathedral city" for the imposing temple that towers in the center of the ancient village, dedicated to Santa Maria Assunta and San Canio. In this small treasure chest of antiquity, prestigious fountains and palaces follow one another, many of which with internal courtyards, decorated with coats of arms and stone portals. The traditional table is full of delicacies, which can juggle numerous and tasty courses.

A look at Acerenza 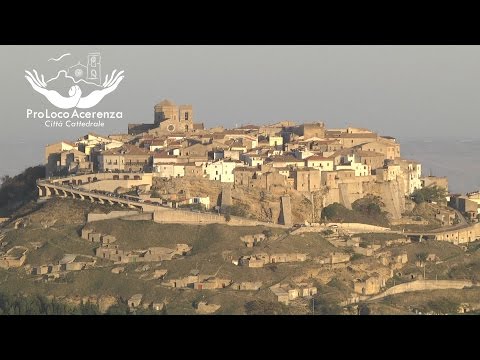 Acerenza Lagerénze (in dialect lucano) is located on a plateau from the steep sides, between the Bradano river and its tributary Fiumarella, and has always been very important from a strategic point of view for the defense of the territory.

The ancient Acheruntia, situated at 833 m a.s.l., appears as an impregnable fortress, whose origins date back to the first tribe degli Osci. Conquered by the Romans in 318 BC, was evangelised by S. Peter in 63 A.D. its position, considered important from a strategic point of view, dominated the large arteries linking the south to Rome: the via Appia, the Appia Traiana and track Erculea. After the conquest of the Lombards, became in 605 chief town of one of the three castaldati della Lucania and in the XI century the Normans they strengthened the castle, fortified the town, built the Cathedral and gave it the name of Basilicata region in honor of this great Christian Basilica. Every year, the 11 and 12 August, is celebrated this important event in a historical commemoration, which transforms the village in a theater to open sky. In 1216 the Knights Templar left traces of their passage in Acerenza. From the 13th to 15th century undergoes the Swabian period, Angevins and Aragonese with families feudatarie of Sanseverino, Durres, Ruffo, Ferrillo, Orsini di Gravina. In 1593 king Philip II of Spain establishing the Duchy of Acerenza with the Pinelli and afterwards the Pignatelli of Belmonte.

Its historic center has maintained the characteristics of the medieval village with the urbanism to radial pattern around the Lombard Castle (now the seat of the museum of sacred art) and the Cathedral, consecrated in 1080 to S. Maria Assunta and S. Canio, patron saint of the city. Built on a previous paleochristian church that, in turn, stood on a pagan temple dedicated to Hercules Acheruntino, the Cathedral is in Romanesque style-Cluniac, on the style of the French Abbey of Cluny. Inside you can admire important pictorial works of Antonio stable and the crypt of the renaissance of the XVI century.

Acerenza is the homeland of St Laviero Martyr, a young man who was born in Acerenza in vico Tergia and who died a martyr in Grumento on 17 November 312. Its annual feast of 17 November is preceded by a Triduum of Prayer in the church dedicated to him.

Via castello - 85021, Avigliano (Potenza)
17.56 Kilometers from Acerenza
Notarchirico's Archaeological Area
Situated in Contrada Notarchirico near Venosa, in Basilicata, contains some finds dating back to ...

Contrada Notarchirico, Venosa (Potenza)
18.79 Kilometers from Acerenza
Aragonese castle
the Aragonese castle of Venosa, in Basilicata, is located at the southern end of the village.

Piazza Umberto I, 21, Venosa (Potenza)
20.96 Kilometers from Acerenza
House of Quinto Orazio Flacco
The so-called Orazio's House is situated in the village of Venosa, in Basilicata.

Via F. Frusci, 40, Venosa (Potenza)
21.12 Kilometers from Acerenza
St. Andrew's Cathedral
The Renaissance Cathedral of St Andrew the Apostle is located in Venosa, in Basilicata.

Strada Provinciale 18 Ofantina, 13, Venosa (Potenza)
21.39 Kilometers from Acerenza
Aragonese castle
the Aragonese castle of Venosa, in Basilicata, is located at the southern end of the village.

Via sotto il Campanile Maggiore, 1, Maratea (Potenza)
91.38 Kilometers from Acerenza
The via ferrata and the Nepalese bridge
The Via Ferrata is an equipped path to scale the Lucanian Dolomites.

Via Mordini, 1 - 85048, Rotonda (Potenza)
94.05 Kilometers from Acerenza
B&B La Voce del Fiume
An intimate environment, with an awakening between the scent of homemade cakes and going to sleep...

Potenza: trip to the villages of Acerenza and Venosa
It is from the capital of Lucania that we leave for two of the most beautiful towns in the region. Acerenza and Venosa are villages very different from each other but both very fascinating. Located in the north of the region, land of plateaus and valleys, continuous alternation of areas characterized by dense vegetation, cultivated areas and vast expanses of grassland, but also an area dotted with tiny villages often clinging to the hills and...
Continue
Acerenza, the village of mysteries ... between the Holy Grail and Dracula's daughter
In Basilicata, this year, nothing is said but Matera, the European Capital of Culture 2019. But Lucania is not represented only by the (splendid) City of the Stones. Among the less well-known villages, but no less fascinating, we point out Acerenza. Perched atop a hill in the province of Potenza, Acerenza is capturing the attention of many scholars and fans of legends. Here, in fact, the Holy Grail would be hidden. In these parts, in fact, it is s...
Continue
Petralia Soprana: the village of the Borghi autumn 2018
After the victory of the village of Ganci in 2014, of Montalbano Elicona in 2015 and Sambuca di Sicilia in 2016, the land of the Gattopardo, with a plush step, once again, climbs the podium peaks with another gem of the hinterland, winning with Petralia Soprana the title of Borgo dei Borghi autumn 2018. This edition of the Il Borgo dei Borghi competition, an autumn spin-off linked to the Kilimanjaro television program, began with three groups per ...
Continue