Share
The village of Cordovado was probably born on the remains of a Roman castrum. To the north of the village there is the Sanctuary of the Madonna delle Grazie, a jewel of Baroque art, while to the south there is, of considerable interest, the elegant "ancient Cathedral of S. Andrea" in Romanesque style. 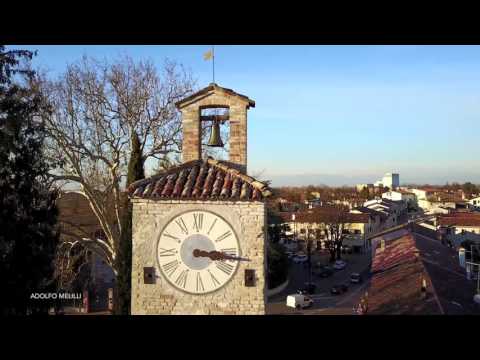 Cordovado (Cordovât in Friulian) derives from "Curtis de Vado", Latin name that meant a great agricultural complex (Curtis) near a ford (vadum) on the river Tagliamento (on a branch now disappeared of the river). The first official appointment of Cordovado occurs in a document of 1186, but the ancient village is born probably on the ruins of a Roman castrum, which was placed in defense of a ford of the Via Augusta, track that from the Roman Concordia Sagittaria led to "Noriker", on a branch now dried up the river Tagliamento. Always was a possession of the bishops of Concordia (so much so as to become a summer residence and subsidiary headquarters), who ruled it through a steward, charging this is attributed to the family of Ridolfi who had the task of reside there permanently, to preserve and defend it, administer and amministrarvi justice (was granted to the Community wide autonomy, as the criminal jurisdiction and the Statute of 1337).

All the fortified complex underwent in 1387 the siege of troops carraresi and in 1412 that of the Venetian troops against Hungarians asserragliativisi. In 1420 it passed to the Republic of Venice, which confirmed the Bishop the right to possess and jurisdiction over Cordovado, which was raised to the rank of the marquisate. Then followed all the vicissitudes of the Communes of the Patria del Friuli up to the union with the Kingdom of Italy in 1866.

The actual fortified area is the result of changes and stratifications which have succeeded one another in time, the most significant ones between six and eight hundred. The external circle of walls with rampart, Fossato, two towers portaie still present today in the early middle ages was enclosing an inner space constituted by Episcopal castle, in turn provided with walls and moat with a drawbridge, mastio and other buildings, next stood the village. The last description us seam of the castle that belonged to the bishops of Concordia dates back to 1856, shortly before its definitive reduction. Along south-eastern walls are the remains of the moat and the houses built inside the fence in the XIX century. The two towers portaie, the southern preserves the posterla, Northern, also called the Clock, ladders and walkways in wood to its inside.

To the south of the medieval village of remarkable interest the elegant "ancient Cathedral of S.Andrea" in Romanesque style (the portal bears the date of 1477) with frescoes on the apse made at the beginning of the Sixteenth Century by Gianfrancesco da Tolmezzo. To the north of the village, is located another pearl, the Sanctuary of the Madonna delle Grazie (1603) which is a jewel of baroque art, octagonal shape with beautifully carved ceiling gilded by Cataldo Ferrara (1656-58), ovals painted by Antonio Carneo with figures of the Sybils and the Prophets, statues in stucco of Andrea dell'Aquila and the paintings by Antonio Moretto. In the vicinity of the village has been opened to the public a theme park dedicated to the famous novelist Ippolito Nievo, that Cordovado and surroundings has set the initial parts of his famous "Confessions of an Italian".

the Municipality is part of:
I Borghi più belli d'Italia
Unione Tagliamento

Ippolito Nievo Literary Park
The Literary park dedicated to Ippolito Nievo also winds through some points of interest of the v...
Piazza Duomo, 16, Cordovado
Cordovado Castle
The Castle of Cordovado was built around the 11th century to defend the territory against the rai...
Via Castello 3 - 33075, Cordovado
Abbey of St. Mary in Silvis
The Abbey of Santa Maria in Silvis is situated in the village of Sesto al Reghena, in Friuli Vene...

Piazza Libertà, 7, Valvasone (Pordenone)
16.81 Kilometers from Cordovado
River Stella Mouth Natural Reserve
One of the peculiar and distinctive environments of the entire lagoon of Marano, from the remarka...

Agriturismo VI Pietra Miliare
The Agriturismo offers the best refreshment to those who travel while the accommodations are idea...

Via Cesare Battisti, 4, Valvasone (Pordenone)
16.81 Kilometers from Cordovado
B&B La contrada
The Bed & Breakfast La Contrada, in the heart of the village of Valvasone, is immersed in a frien...

Vicolo Monte Santo, 1, Valvasone (Pordenone)
16.87 Kilometers from Cordovado
Casa in Borgo
Casa in Borgo is an historical dwelling situated in the heart of the village of Polcenigo, in Fri...

Borgo Alpi, 5, Valvasone (Pordenone)
17.02 Kilometers from Cordovado
La Becjarie
Daniele and Raffaele of Becjarie of Valvasone, in Friuli, are waiting for you to make you taste t...

Cordovado is present in issue 5 of our digital magazine e-borghi travel.
Read it now!

Pordenone: trip to Valvasone Arzene and Cordovado
It is from the heart of the Friulian lands that this itinerary of art and culture starts between the plains and the mountains. We leave the city of Pordenone and go along the state road 13 to Casarsa della Delizia and then continue, through the countryside, along the provincial road 1 up to Valvasone Arzene, where people speak the western Friulian, the first stop on our itinerary in the west lands of the Friuli, lands of waters and cou...
Continue
Recipe: Jota, the tasty minestrone of the Friulian villages
In the past, the jota was based on essential and protein ingredients: sauerkraut, beans and cornmeal. The only concession to the throat was given by the pestat, a mixture of lard and aromatic herbs. Nowadays this typical cuisine cooked in the villages of Friuli-Venezia Giulia - also present on the tables of the provincial capitals - is served all year round and, depending on the climate, hot, cold or lukewarm, usually accompanied by wine glasses of the Carso that enhance its flavor. The jota also represents the pleasure of meeting and lig...
Continue