Share
The village of Peccioli dominates the Valley of the Era from its top, along the road from Volterra to Pisa. It grows around the ruins of the ancient medieval castle, surrounded by olive groves, vineyards and green hills, and still retains many examples of twelfth century architecture such as the Pieve di San Verano, the Chapel of Peccioli and the Pretorio Palace. 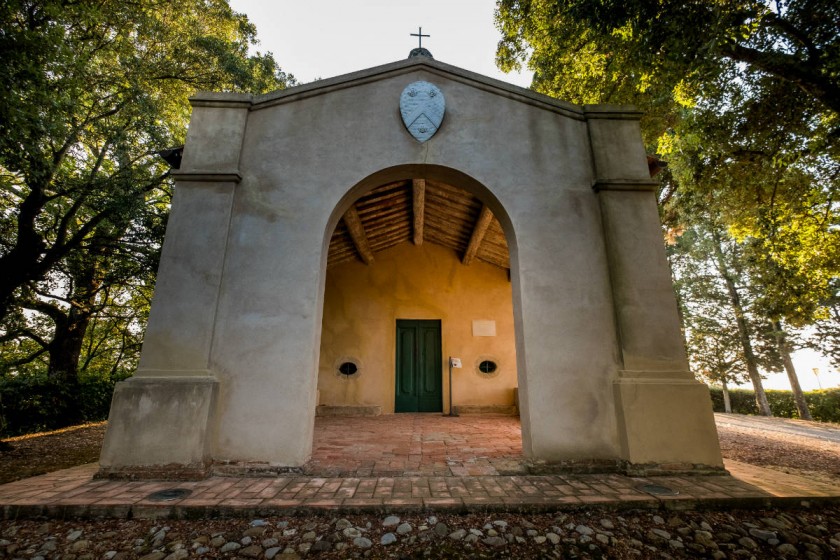 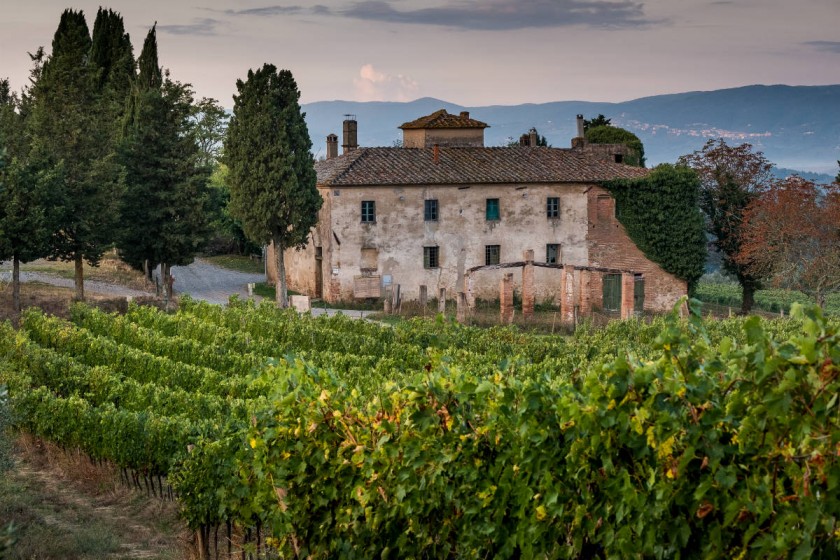 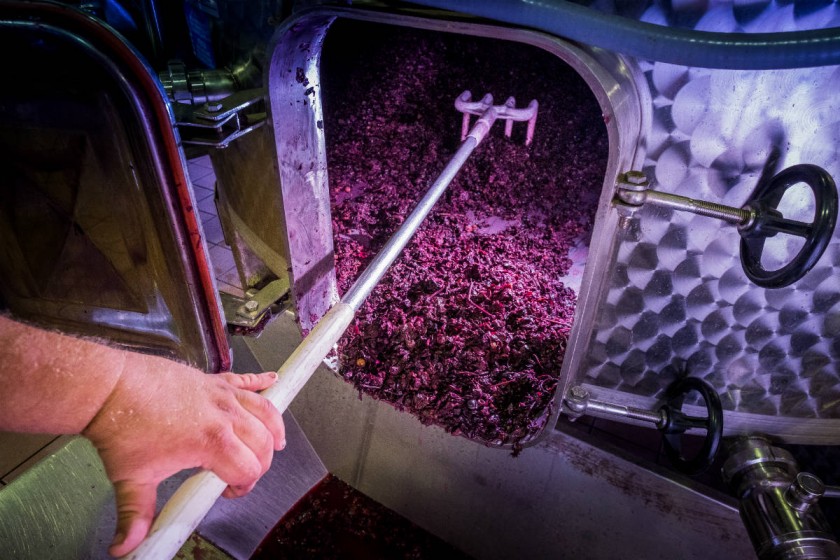 Processing and care of the vineyards of wine 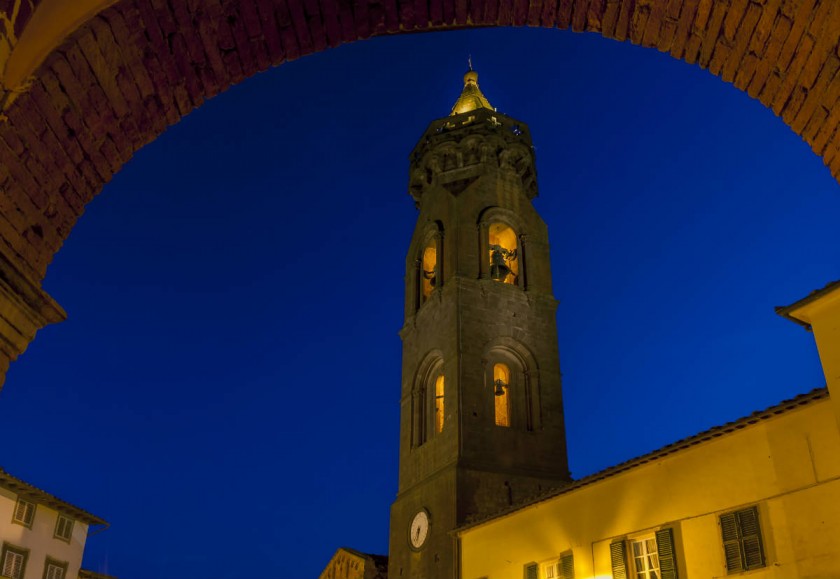 Peccioli is a medieval village characterized by narrow streets and steep alleys, typical of medieval villages, which are called chiassi, with the church in the Pisan Romanesque style and its square in the center. Its territory is rich in rural landscapes and small villages with ancient origins, such as: Cedri, Ghizzano, Fabbrica, Montecchio, Libbiano and Legoli.Within them, multiple contemporary art works coexist in a symbiotic way, created by artists who have chosen the village of Peccioli as their creative space.

Among the most important monuments in Peccioli are the Church of San Verano, the Church of Our Lady of the Carmine, the ruins of the Rock of Castruccio Castracani and the Museum of Russian Icons.

The local economy is predominantly based on livestock farming, high-quality winery production and the activity of the numerous clothing and furniture industries across the country.

The name was first affirmed by a parchment of 793 as Picciole, Petioli and Pecciori and probably derives from the Latin term picea, "wild pine", and despite a place called Pecciole giving title to a church in the 8th century, history of Peccioli is known only from the first half of the century. XII. The country is later recalled in a parchment of 1061 received by the bacon of Poggibonsi by the donation of a certain Marchese Alberto, son of the Marchese Obizzo, referring to the Petiole site placed on the Era. The consolidation of the village took place in medieval times, around a castle that was subject to the jurisdiction of the Counts of Gherardesca, who were already enjoying numerous properties in the surrounding area. In the 12th century the same Counts gave the Castello di Peccioli to the Bishops of Volterra who, in the struggle against the Pisan expansion, made a defensive bastion of the city of Volterra and then another Bishop gave it to Pisa. Over the centuries the Castle was gradually enlarged and reinforced: the village and the cliff situated on the hillside of "Castellaccia", were closed in a first wall, from which the southern part of Pieve di San Verano was excluded because , like all churches, in the case of war or siege, should be ready to welcome the faithful and peasants who lived in the open countryside. The enclosure was subdivided into 'curtains' delimited by square towers, at corners, and rounded along the course of the curtains themselves.

In 1163 Pisa with its army took over the Castle. Following the defeat inflicted on the Pisans by the Genoese in the Battle of Meloria in 1284, Volterra stood under the protection of the Republic of Florence and laid the foundations for a new offensive. In 1362 there was a war between Pisa and Florence and the Florentines, knowing the strategic importance of the Castle of Peccioli, sent a strong army in Val d'Era at Captain Bonifazio Lupi's command but the first attempt at conquest failed. Considering that the Castle of Peccioli was unavailable at that time, the Florentine army headed to Pisa and at Cascina, Riglione and Putignano it sacked numerous palaces, noble villas and simple houses. On 11 August 1362 the Captain Pisa and his small handful of men surrendered and was sent prisoner to Florence. On August 28, 1364 Peccioli with the whole Val d'Era returned to Pisa. And again in October 1406 under Florence. Throughout the fifteenth century Peccioli suffered plunder and devastation by cities and anti-Semitic nobles, and did not fail at the same time to rebel against the Florentine Republic when it presented the occasion. In 1431 Peccioli sustained the invasion of his territory by the troops of the Ducato of Milan led by Niccolò Piccinino and in the 16th century that of the troops of the Prince of Orange, who had previously besieged the city of Florence. In 1531 Tuscany became Granducated and, with Ferdinand I de 'Medici, it was especially enriched in the field of agriculture (vineyards and olive groves) and there was a new administrative order. With the submission to the Grand Duchy of Medicea, Peccioli began a period of peace and political stability that continued until the advent of the Dukes of Lorraine in power, which started the first land reclamation work that further favored the development of the agricultural activities and wine production. The Dukes of Lorraine maintained the control of Peccioli even after the end of French domination, which took place at the beginning of the nineteenth century. On April 27, 1859, the last Grand Duke of Tuscany, Leopold II of Lorraine abdicated and on 11 and 12 March 1860 there was the "plebiscite" for the annexation to the Sabaudo Kingdom. On June 2, 1946, the Monarchy passed on to the proclamation of the Republic.

On the top of a hill, along the Valdera, Peccioli is a bit of a manifesto of Tuscany. There are found all its ancient characters, tradition, but happily married with modernity and the pleasure of living, to do culture.
Crossing the harvest and the lively town center, you arrive to Piazza del Popolo, where we find the parish church dedicated to San Verano (or better to say, its terga, because the square is overlooking the back of the building) and the Palazzo Pretorio, of medieval architecture in which today is hosted the original museum of Russian icons, most of them coming from the collection of Francesco Bigazzi, dating back to the XVIII-XX.
Moreover, wherever you walk in this village where we breath history and, especially, art: not only thanks to the prestigious signs of the past, but because, from any part of it reaches the visitor in every corner of the village will be face to face with contemporary art installations. From 1991 onwards, in fact, Peccioli has called a series of international artists to embellish the city with their works, to enrich its monumental heritage, penalized by the destruction of the medieval castle during the last war.
The art is in the air everywhere, even in the fractions of the surroundings, you can easily reach, plunging into the Tuscan landscape. In the nearby Legoli you can visit the chapel with frescoes by Benozzo Gozzoli dating back to 1480, while at Libbiano is located the Galileo Galilei Astronomical Observatory.

Viale Italia, 8 - 56025, Casole d\'Elsa (Siena)
14.31 Kilometers from Peccioli
Roman Theater
The Roman Theater of Volterra in Tuscany, was brought to light in the fifties.

Viale Franco Porretti, 41, Volterra (Pisa)
19.57 Kilometers from Peccioli
Ecomuseum of Alabaster
The Alabaster Ecomuseum in Volterra is an environmental museum that retraces the history of alaba...

Via Don Giovanni Minzoni, 13, Volterra (Pisa)
20.02 Kilometers from Peccioli
Sillana Fortress
The Sillana Fortress is a fortification dating back to the XII century the village of Pomarance, ...

Via della Madonna, 37-39, Montescudaio (Pisa)
25.73 Kilometers from Peccioli
Volterra Art Gallery and Civic Museum
It houses a collection of works of great historical and artistic value, housed in the rooms of th...

Find where to sleep in Peccioli