Share
Located on a hill overlooking the Val di Cecina, Casale Marittimo enjoys an extraordinary panorama of the Tuscan Archipelago and the coast. It is immersed in the green of the typical Mediterranean scrub and there are places of archaeological interest such as Casalvecchio and Casa Nocera.

A loot at Casale Marittimo 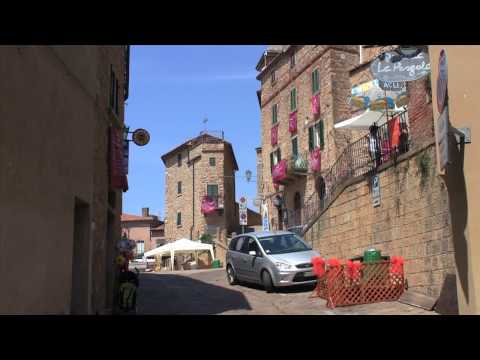 "To the right comes a sloping hill that stretches out to the sea, and in whose last back is the modern Casale." Giovanni Targioni Tozzetti, an erudite traveler, in the middle of the 18th century, evidently gave voice to the tradition that two castles existed: Casalvecchio, whose name has remained to indicate a hill to the southeast of the present country, and Casalnuovo, today Casale Marittimo. The area, rich in mineral waters, game, salt, along with climatic mildness, had in the past favored human settlements ever since. And just on the hill of Casalvecchio, archaeological excavations have brought to light the remains of an Etruscan village of the seventh century BC But the most extraordinary discovery is that of the necropolis of Casa Nocera, a burial complex of orientalizing age, belonging to the warrior princes Etruscan, dominating the area. In the 6th century. B.C. the tomb of the Poggiarelle tholos dates back to 1896, an exceptional example of Etruscan funerary architecture, found in the archaeological museum in Florence.

The old town is made up of stone buildings that follow the development of the two medieval walled circles at concentric rings. The Castle is accessed via a ramp where the tower of the clock erected in 1854 rises. From the main square you reach the villages, quarters developed outside the castle walls from the late 1500's, with characteristic alleys, arcades and staircases. From the point of view of history are interesting the Pieve di Sant'Andrea, the palace of the Canonica, the Church of San Sebastiano and the Chapel of the Madonna delle Grazie, rich in archaeological finds of Roman era.

Around the country, and between this and the sea, extends a richly cultivated countryside that produces cerali, oil, honey and a fine wine, DOC Montescudaio.

Dense calendar, from spring to fall, that of fairs and parties. Among the various gourmet events in July, the traditional Snail of the Chiocciole and in August the wild boar.

On a hill not far from the sea and that of the sea has the aroma and purity, behind Cecina, on the tyrrhenian coast, behold Casale, refuge for those seeking relief and calmness from the life of the city as well as favorable area as urban settlement since ancient times, thanks to its mild climate, mineral waters and the abundant game. Already the ancient Etruscans had settled in the area: the archaeological excavations have brought to light the remains of a village of the VI century on the nearby hill and a complex of burials in the necropolis of Casa Nocera. Do not think, however, that over the centuries the settlement has had an easy life, between the incursions of the pirates and unhealthy air. But it is mainly due to the progressive reclamation of coastal marsh, which occurred in the course of the nineteenth century, that today the inhabitants of Casale, as well as tourists in search of peace and quiet, can enjoy a place with a high quality of life at a short distance from the sea, beaches and pine forests. Going up to the castle by a ramp that turns toward the sky, the curious visitor can take a look at the ancient clock tower and to the house of the Treasurer, among the oldest in the country, for then pleasantly take refuge in some Wine Bar open among the beautiful stone houses. On the counter is certainly unmissable a good glass of local white, Montescudaio or San Torpè, nor the even more typical cantuccini, in the basket a sweets.

Piazza Teresa, 3 - 57022, Castagneto Carducci (Livorno)
7.07 Kilometers from Casale Marittimo
Carducci Archive Museum
The Archive Museum is part of the literary park dedicated to Giosué Carducci in the village of Ca...

Piazza Castello Mediceo, 2, Lari (Pisa)
29.95 Kilometers from Casale Marittimo
Roman Theater
The Roman Theater of Volterra in Tuscany, was brought to light in the fifties.

Itinerary outside of Pisa: a weekend between Casale Marittimo and Castelnuovo Val di Cecina
Amongst the most beautiful Tuscan and Italian cities, Pisa has glimpses of rare beauty, so that, as you move away, you often want to turn around to look again to look up at the tall top of the leaning tower, dominating one of the most beautiful corners in the world for its architectural content. The extraordinary nature of Pisa and its territory has, not only priceless artistic treasures, a history that dates back to the times of the Mariti...
Continue
Recipe: the Forma di Fichi Secchi from Casale Marittimo, Pisa
ALSO FOR VEGANS Here comes Friday and this means we are ready to share with our community another typical recipe from one of our villages. We are at the end of June and this is the right season to eat figs, super sweet and juicy fruits that are extremely good in the dried version as well. Indeed, the recipe that we are making today is precisely the Forma di Fichi secchi (dried figs dessert) typical of the village of Casale Marittimo
Continue