Share
Immersed in the wild nature of the Monti Sibillini National Park, one of the most beautiful protected natural areas in Central Italy, the medieval village of Preci developed within a fortress. Following an earthquake in 2016, the Abbey of Sant'Eutizio was damaged, the town's jewel the historic center was completely unusable.

A look at Preci 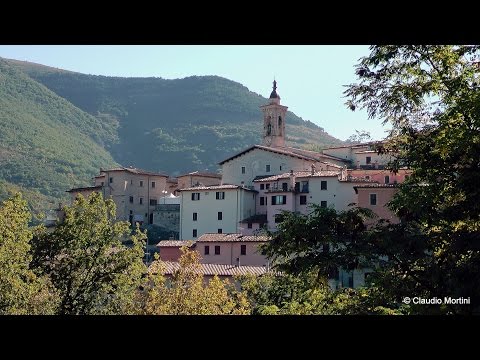 From a wonderful position 596 m a.s.l. the village of Preci (Préši in local dialect) extends its territory is mainly the Castoriana Valley. The valley connects the fork of Ancarano Bridged Chiusita, and is characterized by the presence of a myriad of small centers where there are splendid churches rich with art works. Its harsh morphology, is mitigated by a luxuriant vegetation, shrubby and herbaceous, even if some species are now disappeared, like hemp that was cultivated in small plots said "canapine". In the past also abundant medicinal herbs, whose curative properties were known to Eastern monks who lived in hermitage in the valley, and subsequently to the Benedictine monks. The whole area is rich in water and many are the sources to karst regime that plentiful gush out from imposing formations of calcareous rock.

Of medieval origin (XIII century), the village of Preci developed within a fortress. The earthquake of 1328 destroyed it almost completely. Reconstructed, was elevated to a Municipality in 1817. During the last centuries of the Middle Ages and the modern age (at least up to the seventeenth century), reached a certain reputation for a School of Surgery specialized in the extraction of kidney stones. In October 2016 Preci as Castelsantangelo sul Nera, Visso and Ussita, was struck by new seismic shocks that have damaged the Abbey of Sant'Eutizio and made the historic center completely unusable.

The first document from which it detects the name of the village of Preci dates back to 1232. It was constituted by a small settlement not far from a Benedictine oratory from which probably became the name "preces" - Prayer. In the second half of the XIII century, to protection of the village rises the castle. Initially became part of the possessions of Spoleto and then pass, in 1276, under the municipal authority of Norcia that in those years was in full phase of territorial expansion. After many vicissitudes which is mainly related to power struggles between the pontifical authority and the lords of the powerful families, even Preci was involved sadly in these conflicts. For having rebelled to Norcia and after having given refuge to the lords of Camerino, Rodolfo da Varano and Beatrice Column in 1528 had to endure the destruction, for work of the nursino army. The supporters of the rebellion were bandits and relegated in the impervious Castelluccio from which it derives the ancient name of Castel Precino. In 1533 Pope Paul III agreed to the reconstruction of Preci on condition of a final reconciliation with Norcia. The rebuilding of the Castle coincides with the increase of the fame of the medici Preciani throughout Europe. Inside the walls of the new castle the affluent and wealthy families of the medici made build by Lombard craftsmen operating in the area, elegant palaces. Even the smaller building was built not neglecting the use of architectural elements of moderate interest. We can say that, substantially, the village of Preci, has maintained its sixteenth-century aspect, typical of the fortified villages constructed on the heights.

The village, very gathered, is crossed by a web of narrow streets that tortuosamente, climb and converge into the main square on which stands the church of the parish of Santa Maria, built in the XIII century by the monks of Sant'Eutizio. The main portal of 1300, in gothic style, is particularly sober. On the left side, subsequently it was open an interesting fifteenth-century portal and the same wall where you notice various coats of arms and fragments of inscriptions, was united with a portico, now disappeared, adjacent to the home of the Community thus providing the venue for the first meeting of the municipal council.

Maintaining the agrarian landscape traditional cannot be linked to the wide diffusion they have in this territory the techniques of’organic farming: at the base there are the rotation of crops and the renunciation of’use of synthetic chemical substances, then the maintenance of trees, hedges and species and varietyà traditional, both plant and animal, perfectly integrated with the territory, representing an extraordinary basin of rural biodiversity.

Spelt, barley, lentils, chickling vetch and bean, cultures be considered archaic until a few years ago today are a symbol of a healthy diet and allow you to rediscover ancient flavors jealously preserved by the rural civilization. Between the mountains you can marvel at the tenacity of small sheep farmers still today transhumant, that with a little luck we can then find them downstream in their small business laboratories, where you can also taste cheese from the unique flavor. As well as you can meet the passionate beekeeper, able to taste directly the floristic richness local translated into honey by the tireless bees. Preci and Valcastoriana are also black truffle of Norcia, to taste directly in the excellent local restaurants, that every day attract customers from a wide radius becauseé famous for the High Quality and genuineness dishes, proposed to honest prices.

Other applies for the two main fruits of the territory: the trout and the ham. These are products in Preci to enter the national market (sometimes also crossing state borders) which conquest important shares. Trout reared in plants of the Valnerina occupy 7% of the national market and are appreciated for the particular taste. As proof of the attention with which the activities productive inserted in an environmental context of great environmental value but also extremely fragile, all the ittiogenici systems are subjected to voluntary certification of quality environmental. In recently constructed plants has even begun to transform the products of the trout colture in worked particularly appreciated by families, such as trout fillets.

The product of Preci most known is however the ham that is seasoned in four large plants in the municipal territory, for a production that is around 450,000 pieces every year, among which is present about the 85% of certified production “Prosciutto di Norcia IGP”.

Village of Preci
Municipality of Preci

the Municipality is part of:
Città del bio
Città slow

Corso Garibaldi, 6, Citerna (Perugia)
101.59 Kilometers from Preci
Palazzo della Corgna
Also called the Ducal Palace, it was the principal residence of the Corgna family, who governed, ...

Via V. Emanuele, 91, Castiglione del Lago (Perugia)
84.89 Kilometers from Preci
Fontana delle Pere
In a quiet corner of Umbria made up of olive groves, vineyards, meadows and Mediterranean scrub, ...

Via Roma, 11, Castiglione del Lago (Perugia)
85.27 Kilometers from Preci
Paniﬁcio Pucci
The Pucci bakery confectionery has been offering for years its customers a rich production of swe...