Share
Varzi is located in the center of the Stàffora Valley, in the heart of Oltrepò Pavese. The village is part of the culturally homogeneous territory of the Four provinces (Alessandria, Genoa, Pavia, Piacenza), characterized by common uses and customs and by an important repertoire of very ancient music and dance. The main instrument of this area is the Apennine pipe that accompanied by the accordion, and once by the müsa (Apennine bagpipes), guides the dances and animates the parties. 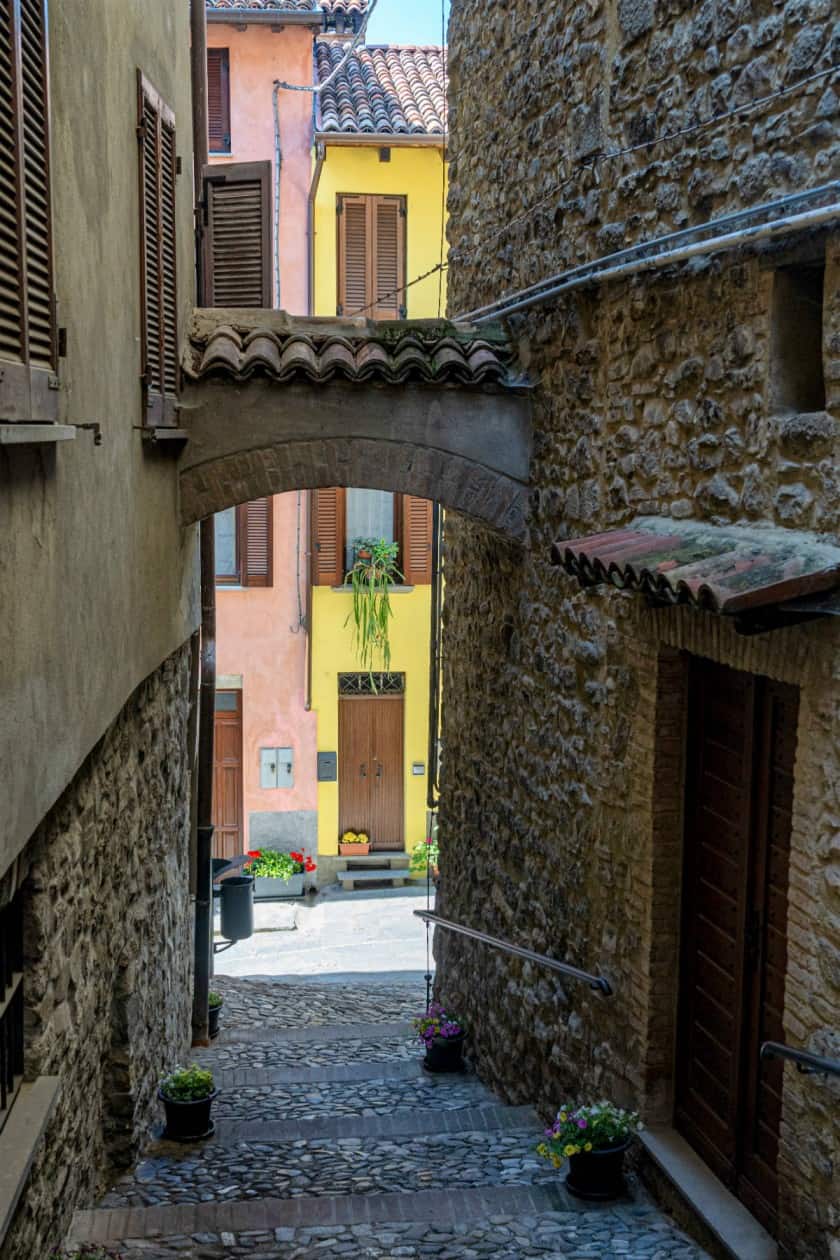 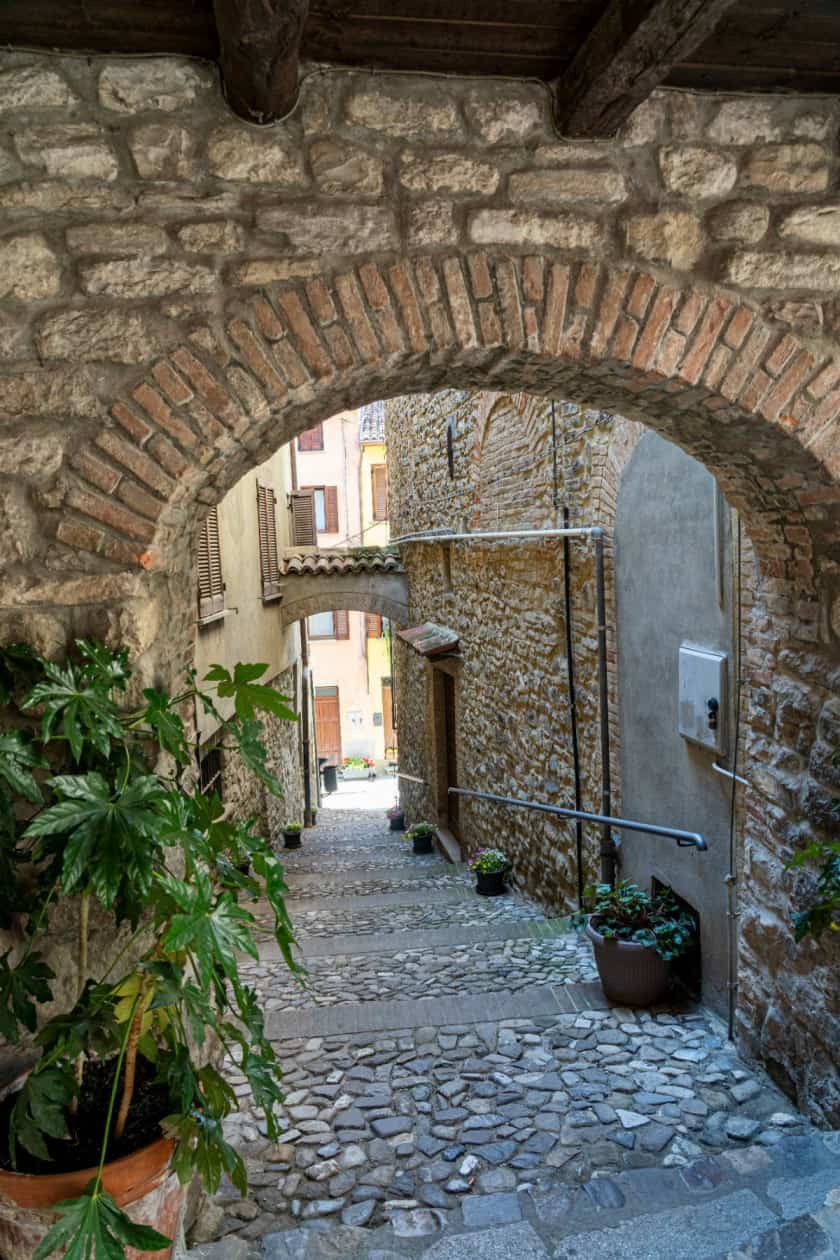 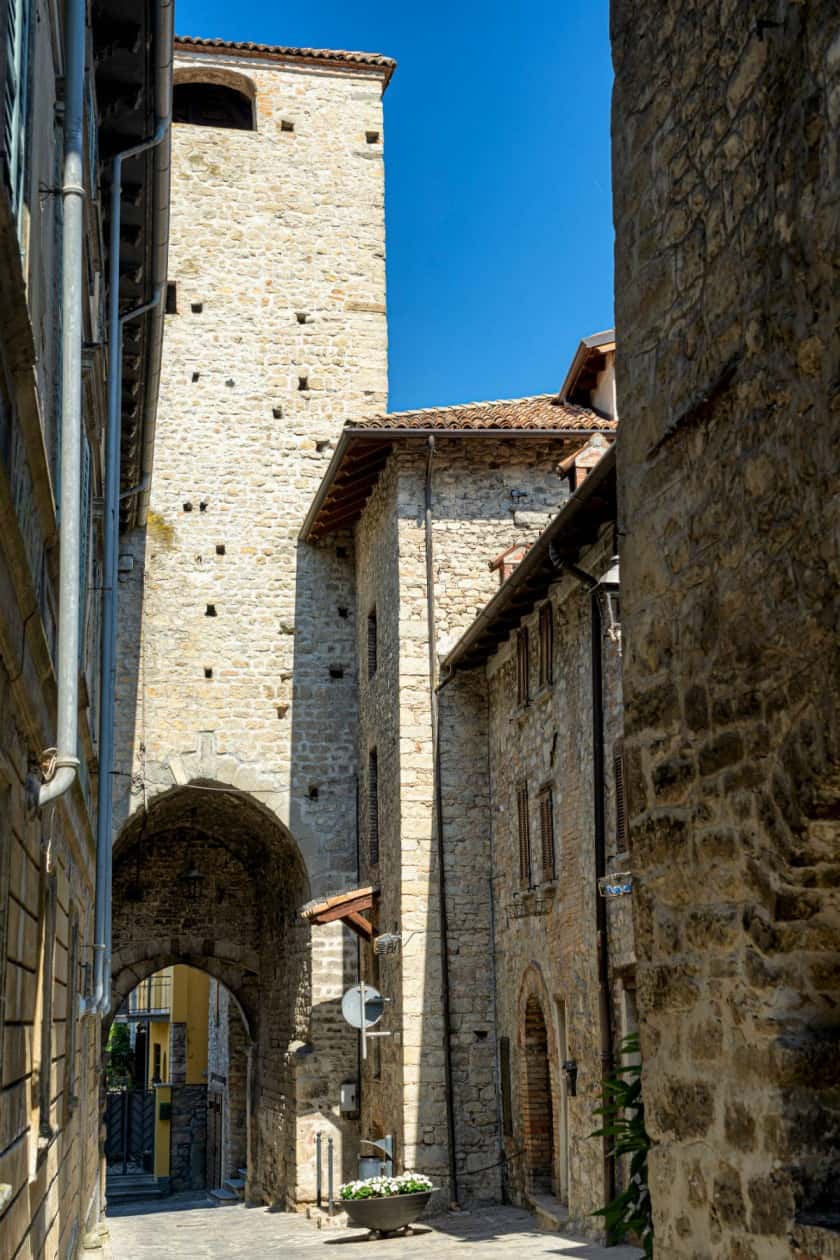 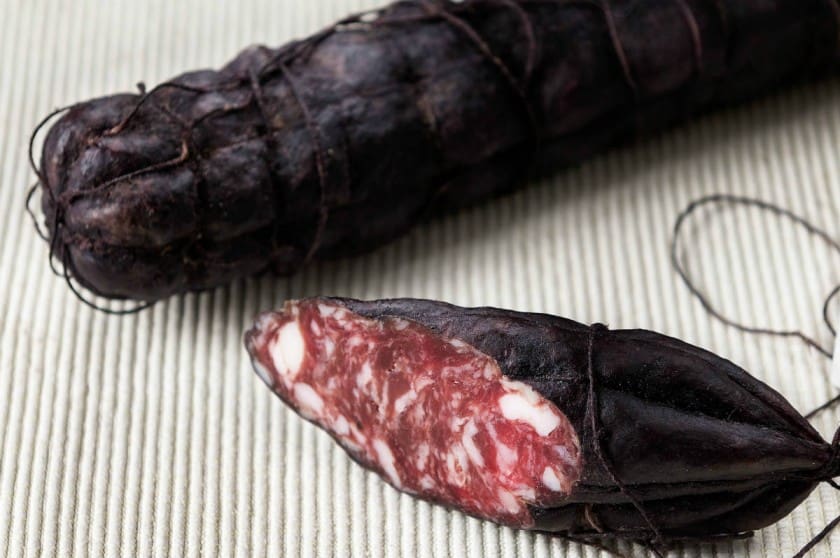 A look at Varzi

The village of Varzi (Vörs in dialect of Varzese) is located in Oltrepò Pavese, Lombardy. Located in the center of Valle Staffora, its origins are probably Liguria (the name contains the var root which, considering the Ligurian rivers Var and Vara, should mean river). Known since 993, when it was owned by the abbey of San Colombano di Bobbio. At Varzi stood the ancient church of San Germano. Like the rest of the valley, it fell under the power of the Malaspina, which had its regular investment in 1164. The Imperial diploma does not mention Varzi yet, but the surrounding castles. Probably the country was beginning to develop thanks to the tradesmen of the merchants who, crossing the salt path, from the plain climbed the valley to reach the Ligurian coast through the steps of Pénice, Brallo and Giovà. Varzi's fortune began in the 13th century. The subsequent hereditary divisions between the Malaspina established in 1221 the separation between the Malaspina del Dry Spino (in Val Trebbia) and Spino Fiorito (in Valle Staffora). The latter were divided in 1275 between three other lines. The Marquis Azzolino, the founder of the Varzi line, took up residence and built the castle, fortifying the hamlet and making it the capital of a vast lordship. It included, besides most of the municipality of Varzi, also the village of Menconico and part of those of Santa Margherita of Staffora and Fabbrica Curone. In 1320 the Malaspina gave Varzi the Statutes, compiled by the Cremonese lawyer Alberto dal Pozzo.

These divisions inherited inevitably resulted in the ruin of the marquis: he not only had to acknowledge the supremacy of the Duke of Milan, who made his own choice in spite of his imperial diplomas, but ended up falling under the rule of a stranger, Count Sforza of Santa Fiora, who after obtaining the investments of the Menconico landlord in which the local line of the Malaspina had been extinguished, gradually bought most of the feudal quotas, ending to be recognized as the only lord of Varzi. Malaspina remained only the title of Marchesi. The progressive ruin of the Malaspina did not diminish the prosperity of Varzi, which remained the center of valley trade and one of the most important centers of the Oltrepò. In the 18th century, after the Savoy in 1743, it was the seat of one of the three cantons in which the province of Oltrepò was divided. The feudal regime ended in 1797. By the Bobbies of the Kingdom of Sardinia in 1743, according to the Treaty of Worms, he became part of the Province of Bobbio. In 1801 the territory was annexed to Napoleonic France until 1814. In 1859 he entered the Circondario di Bobbio and then Lombardy. In 1923 the Circondario di Bobbio was subdivided into several provinces. After September 8, 1943, as in the entire Oltrepò Pavese, the first partisan bands formed and Varzi became the center of a free zone (the so-called 'partisan republics') at the end of September 1944. It remained free until 29 November.

This country is part of the culturally homogeneous territory of the four provinces (Alessandria, Genoa, Pavia, Piacenza), characterized by common customs and customs and an important repertoire of very ancient music and dances. The principal instrument of this area is the Apennine piercings accompanying the accordion, and once from the Müsa (Apennine gourmand), guides dances and animates the festivities.

They certainly deserve a visit to the Castle of Malaspina, the parish of San Germano and that of San Colombano.

It is also noteworthy that not far from Varzi passes the ancient Via del Sale Lombarda, a route that allowed the trade of salt by connecting Pavia with Genoa. Through this passage the goods came from the north, especially wool and weapons, to reach the port of Genoa where, for the return journey, salt was loaded, valuable precious material found in the areas far from the sea, which is indispensable for the preservation of food and tanning the leather. The route followed the whole valley of Staffora (province of Pavia), crossed the ridge dividing the val Borbera (province of Alessandria) from the val Boreca (province of Piacenza) to go down to Trebbia val. The route from Pavia headed south, on roads and mule tracks, touching Voghera, went along the Staffora valley, passing through Varzi, climbing the valley to the village of Castellaro, climbing Mount Bogleglio (1492 m), crossing the ridge to Mount Chiappo (1700 m), Mount Cavalmurone, Mount Legnà, Mount Carmo and Mount Antola (1597 m) descended to Torriglia in Val Trebbia, a meeting point with the Piedmontese and Emilian trails, and from there easily reached Genoa through the Scoffera's step.

After the fall of the Longobards by Charlemagne, the Holy Roman Empire constituted the Imperial Feudi with the aim of maintaining a safe passage to the sea; assigned these territories to loyal families who ruled for centuries these feuds. The valleys of Staffora, Borbera, Curone, Trebbia, Aveto, Magra were under the domination of the Malaspina family which, in agreement with the city of Pavia, guaranteed the flow of goods through its territory by collecting related taxes and gabelles and guaranteeing the safety of goods and the protection of travelers. The opening of this road to the sea became the village of Varzi a very important shopping center with shops, warehouses, storage facilities and a walled castle. The transport of the sacks of salt was carried out in the form of a mule, because the narrow and unpleasant mule grooves that hung on the slopes did not allow the passage of wagons. A network with staging points offered men and animals, lodging and stables for this long crossing. Today, the Salt Street, lost its commercial value, has become a destination for hiking and trekking, turning into an environment of particular naturalistic interest.

The Salami of Varzi (DOP) is a pork meat product of Protected Designation of Origin, originating in the municipalities of Varzi, Bagnaria, Brallo di Pregola, Cecima, Fortunago, Godiasco, Menconico, Montesegale, Nice Bridge, Rocca Susella, Romagnese, Santa Margherita Staffora, Val of Nice, Valverde and Zavattarello, all in the Oltrepò Pavese, in Lombardy. The salami of Varzi DOP is one of the most expensive among regional salami, because is produced by all noble parts of the pig, ham, pork, bacon, cup, loin and fillet, and it's also a salami that requires a long ripening with important weight loss. In addition, the costs of strict DOP controls by the Parma Quality Institute are added.

The origin of this is uncertain. According to some sources, it seems that he is already agressive; the Longobards were keeping the pig. In fact, the Longobards, during their various transmigrations throughout Europe (from II to VI century) caused by lack of land, strong population growth and a tightening of the climate, in times of economic problems and constraints, needed of a long-lasting product. Already in the 12th century it was used as a delicious dish: the Marquis Malaspina, an undiscovered Longobard family, served it to guests during lunches and dinners. Over the centuries, the peasants began to consider the pig as an indispensable resource for their survival: thanks to family production, salami became part of the game; easily in the poor farmer's cafeteria, having discovered along the course of the stream Staffora an Appennine valley with a microclimate perfect for seasoning this sausage.

Once the long maturing process is finished, it is necessary that the Varzi salami (with respect to the DOP) has the following characteristics:

Village of Varzi
Municipality of Varzi

Via Vittorio Emanuele, Cascina Mirani, Zavattarello (Pavia)
6.97 Kilometers from Varzi
Church of St. Paul the Apostle
The Church of the patron St. Paul of Zavattarello, in Lombardy, is already named in 929.

Via della Chiesa, 2, Zavattarello (Pavia)
7.14 Kilometers from Varzi
Dal Verme Castle
from the terrace of Dal Verme Castle, in Lombardy you can enjoy a breathtaking view of the surrou...

Via Carlo Dal Verme, 4, Zavattarello (Pavia)
7.28 Kilometers from Varzi
The Sanctuary of Santa Maria in Monte Penice
Place in a particularly panoramic place, from its large square you can enjoy a wide view not only...

Strada del Torrino, 1/3, Bobbio (Piacenza)
15.90 Kilometers from Varzi
Church of St. Paul the Apostle
The Church of the patron St. Paul of Zavattarello, in Lombardy, is already named in 929.

Piazzetta della Chiesa, 1, Fortunago (Pavia)
11.02 Kilometers from Varzi
Dal Verme Castle
from the terrace of Dal Verme Castle, in Lombardy you can enjoy a breathtaking view of the surrou...

Via San Nicola 11, Bobbio (Piacenza)
16.14 Kilometers from Varzi
Bar Pasticceria Davico
The pastry's war-horse are the brioches filled with handmade creams with special flavours such as...

Piazza Duomo 10, Bobbio (Piacenza)
16.28 Kilometers from Varzi
Bocù – Bottegacucina
BOCU’, in the village of Garbagna, is a restaurant with daily culinary proposals, inspired by the...

Trains of desires towards lake and among the villages
Spring are closing in and the desire of out-of-town sundays grows, better if spent on a historic train, with different final destinations. Lake Iseo, for example, also with a ride on a boat or tasting the typical products of the Lombard tradition. All this is possible from May until December with the Italian Touristic Railways (F.T.I.) with the Lombard sections of Lower Sebino Railroad and Camuna Touristic Railroad, in collaboration ...
Continue
5 typical cured meats products from 5 italian territories of small towns
In addition to art and its splendid landscapes, one of the things Italy is proud of is its food: Italy's food and wine heritage is very rich and linked to local products. From north to south, you have the opportunity to taste exquisite food, from truffles to apples, from honey to dairy products, right up to cured meats, true gastronomic excellences with ancient origins. Here are some of the most important and tasty cured meats in Italian gastronomy. Jambon de Bosses raw ham
Continue
Recipe: Ravioli with braised beef and bonarda wine from Varzi
Ravioli with braised beef are a typical pasta dish of the oltrepò pavese and especially of the area of
Continue
Some villages among the European network of good food without borders
EurFoodNet (European Rural Food Network) which will be presented by the President and Secretary of the AICCRE (Italian Association for the Council of Municipalities and Regions of Europe) on Tuesday; October 3, è a European network under the banner of good food that with its excellent food has allowed the territories to become small capitals of food doc and the preservation of particular natural and environmental aspects. To represent Italy there are...
Continue