Share
Bussana Vecchia, a stone's throw from Sanremo, is a delightful village of artists born on the ruins of a town that was abandoned long before, due to the violent earthquake of 1887. The town slowly emptied itself and was a ghost town for more than sixty years, until a group of artists began to repopulate it. Bussana Vecchia remains a magical place, an open-air art laboratory. In the narrow streets and alleys you can admire shops and ateliers that arise in the beautiful stone buildings.

A look at Bussana Vecchia 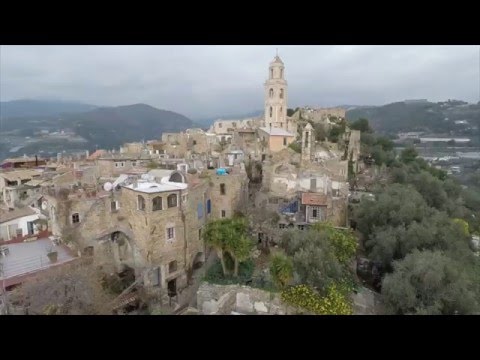 Bussana Vecchia (Bussann-a Vegia in Liguria) is a hilly part of the town of Sanremo, in Liguria. Completely abandoned for decades after the violent earthquake of 1887, it began to be inhabited since the late 1950s by Italian and foreign artists, attracted by the peculiarity of the place, which restructured and restored the less damaged buildings. It currently hosts an international community of artists, with craft shops and some refreshments, so that, over the years, it has become a characteristic village of artists in a medieval village setting.

Situated on a rocky hill behind Bussana Nuova (founded by the inhabitants after the earthquake), it has the typical pine conifer structure to other medieval Ligurian villages. The area it occupies is relatively green surrounded by Mediterranean scrub, chestnuts and sea pines. The village seems to have been founded in Roman times by the name of Armedina or Armedana, but it is only in the 7th century that it has the first testimonies of its existence. Following the Longobard invasions, the population decides to move to the Armea Valley below, where it remains until the tenth century, when the Saracens push the inhabitants to move again to higher and easily defensible places. Thus begins the spontaneous construction of the first defensive structures on the hill above. At least from the beginning of the 11th century, Bussana Vecchia fell under the control of the Counts of Ventimiglia, which provided for the construction of a first defensive castle. In the 13th century the country was purchased by the Republic of Genoa, which however leaves the population a relative independence. From the 15th century there is a strong demographic increase followed by a natural development of the inhabited area. In 1404 the first church was built, built on the remains of a previous one, and dedicated to Sant'Egidio. At the same time the houses, built in the Roman style with square stones, begin to be realized with the stoned stones coming from the nearby rocky beaches. The original castle, abandoned, is now in ruins. Life in the village continues relatively quiet over the next two centuries. The population is predominantly rural and lives in agriculture, cultivation of olive trees and citrus fruits (on terraced landings), and small breeding. From the 19th century they began to have the first hints of the site's danger, still considered as a seismic zone. The first earthquakes of a certain magnitude (1831, 1851 and 1854) begin to occur, so that the population decides to reinforce the existing buildings by introducing the typical arches that connect, at the level of the first or second floor, the dwellings that overlook the narrow bushes of Old Bussana.

On Ash Wednesday, 1887, on February 23, at 6:21 am, there is the earthquake shake that will mark forever the destiny of the country. In just twenty seconds the earthquake causes deaths and great damage: it collapses the vault of the crowded church, and almost all the houses in the upper part of the village are destroyed, burying hundreds of people. The survivors decide to camp in the lower part of the country, waiting to see if it is possible to recover some of the less damaged buildings and reconstruct the collapsed houses. A special commission, established to verify the feasibility of reconstruction, says it is much safer to leave the village to rebuild it further downstream. The majority of the population is opposed to this choice, as it would like to extend the original hamlet and replace the most battered buildings, but the vivid memory of the earthquake and the impositions of the authorities convince the population to found the village of Bussana Nuova, in the area already known as Capo Marine. In 1889 the first stone of the town hall of Bussana Nuova was laid, and in 1894 the bussans abandoned the original hamlet, definitively, celebrating the last mass on Palm Sunday. The village, from that moment, will be called "Old Bussana". Until the forties of the twentieth century, Old Bussana was exploited as a cheap deposit of building materials; however, after World War II some immigrant families from southern Italy try to get themselves in the place. it is only since the end of the 1950s that some artists discover the village and decide to settle down: it is a wonderful place of inspiration and can serve to found an ideal artistic community. The Turin artist Mario Giani (in art, Clizia), after discovering the place in 1959, tries to form a colony of artists but can not and leaves the village by moving to Sanremo, opening a bar in the part called Old Pigna. Meanwhile, the Sicilian painter Vanni Giuffre, who was at the Casinò di Sanremo, decided to come and live in the village.

Here, along with other friends from all over the world, it is a kind of Constitution that governs the life of the village. Over the years, the core of artists continues to grow until it reaches thirty people in 1968. The setting is now international: a village of artists and free thinkers has been created that communicate with each other in English and French, gathering in common spaces to discuss and philosophize. The village, in the early seventies, is still visited only by elite tourism: the seasonal lives normally by the other, and go to Bussana only for creative purposes. Residents, on the other hand, have to rely on the proceeds of their artistic activity, so they seek to attract mass tourism to the village, in full blast at that time. To this end, artistic production began to slip towards handicrafts to exploit the new market that came to be created. From the artistic point of view, the "Open Laboratory" is set up, ie the guidelines are laid down according to which the whole village is a single art workshop, so as to try to reduce the poor quality of the products on display and sale in the various ateliers.

The village can be visited entirely on foot in about an hour. However, one of the greatest attractions is represented by the art workshops and artists' ateliers, open somewhat in the village. The old church of Sant'Egidio, never restored, still shows traces of the original stucco and paintings; it is only accessible from the outside as it is dangerous. The bell tower of the church is miraculously escaped the earthquake, and is seen by the inhabitants of Bussana Vecchia as the symbol of the village. Theatrical events, art exhibitions and live music, especially in summer evenings, are among the most popular activities.

The village of Bussana Vecchia
Municipality of Sanremo

Via Antonio Maccario, 9, Seborga (Imperia)
10.90 Kilometers from Bussana Vecchia
Ancient Musical Instruments Museum
The Museum of ancient musical instruments is located in the village of Seborga, in Liguria.

Piazza Mons. Antonio Rossi, 19, Perinaldo (Imperia)
12.91 Kilometers from Bussana Vecchia
Sundial of the Church of Visitation
The Church of the Visitation in the village of Perinaldo, in Liguria, is traditionally linked to ...

Via Visitazione, 1, Perinaldo (Imperia)
13.35 Kilometers from Bussana Vecchia
Ancient Musical Instruments Museum
The Museum of ancient musical instruments is located in the village of Seborga, in Liguria.

Via G. Verdi, 10, Seborga (Imperia)
10.93 Kilometers from Bussana Vecchia
The Church of Santa Maria degli Angeli
The Church fortress of the Madonna degli Angeli dates back to the year 1000. Transformed into a p...

Via degli Angeli, Apricale (Imperia)
14.67 Kilometers from Bussana Vecchia
'The land and the Memory' Museum
The museum is hosted in the local "sottopiazza" of the medieval village of Pigna, accompanies the...

Piazza XX Settembre,, Pigna (Imperia)
17.04 Kilometers from Bussana Vecchia
Church of San Bernardo
Inside the church you can admire the cycle of frescoes by Giovanni Canavesio on Passion and the F...

Piazza Umberto I, 1,, Pigna (Imperia)
16.92 Kilometers from Bussana Vecchia
Sundial of the Church of Visitation
The Church of the Visitation in the village of Perinaldo, in Liguria, is traditionally linked to ...

Via Visitazione, 1, Perinaldo (Imperia)
13.35 Kilometers from Bussana Vecchia
Doria Castle
The Doria Castle is an ancient fortification of Dolceacqua, in Liguria.

Via IV Novembre 5, Apricale (Imperia)
14.50 Kilometers from Bussana Vecchia
B&B TalkingStones
The building has been entirely renovated according to the principles of green housing.

Via San Bernardo,5 - 18035, Dolceacqua (Imperia)
16.72 Kilometers from Bussana Vecchia
B&B Tra i Carruggi
A comfortable environment will greet you to spend magical and unforgettable nights.

Via Antonio Gramsci 13, Perinaldo (Imperia)
13.38 Kilometers from Bussana Vecchia
Da Delio
Da Delio Ristorante Apricale offers its local cooking based on the products that the surrounding ...

Piazza al Castello, 2, Cervo (Imperia)
25.00 Kilometers from Bussana Vecchia
Azienda Agricola Danila Pisano
The certified organic oil and wine can be purchased for direct sale or in shops in the area.