Share
One of the most beautiful and evocative seaside villages, Giglio Castello stands on the heights of Giglio Island and is an ancient medieval village, whose atmosphere has remained intact over time. Today the Castle is a must tourist destination for anyone who lands on the island. 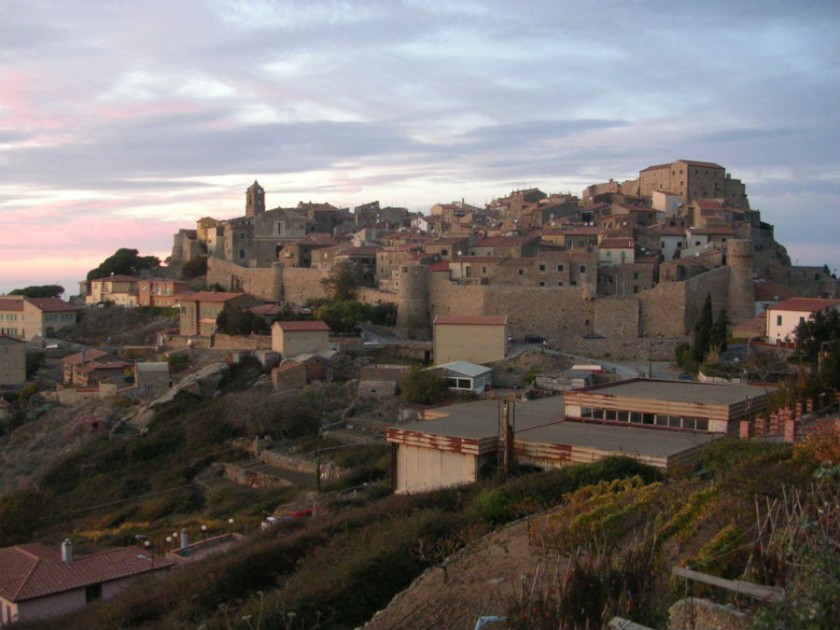 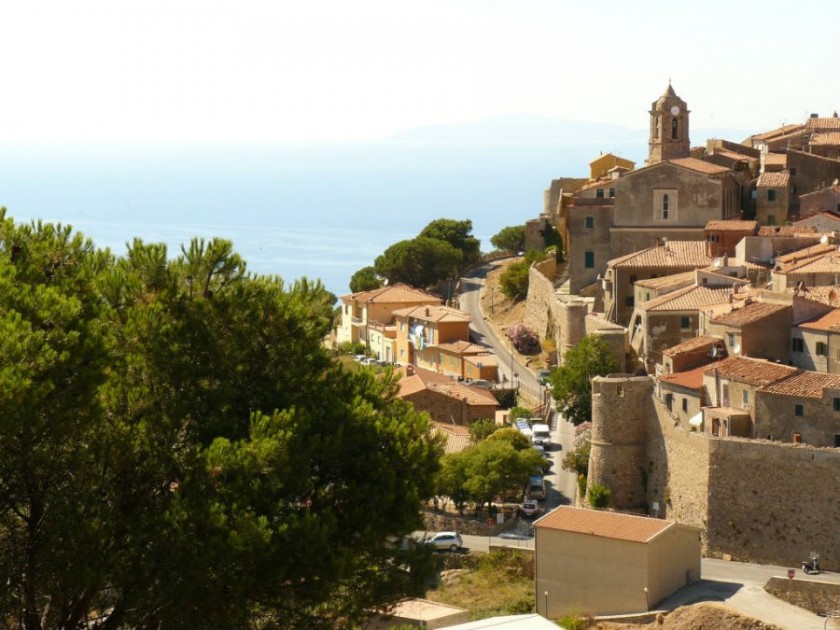 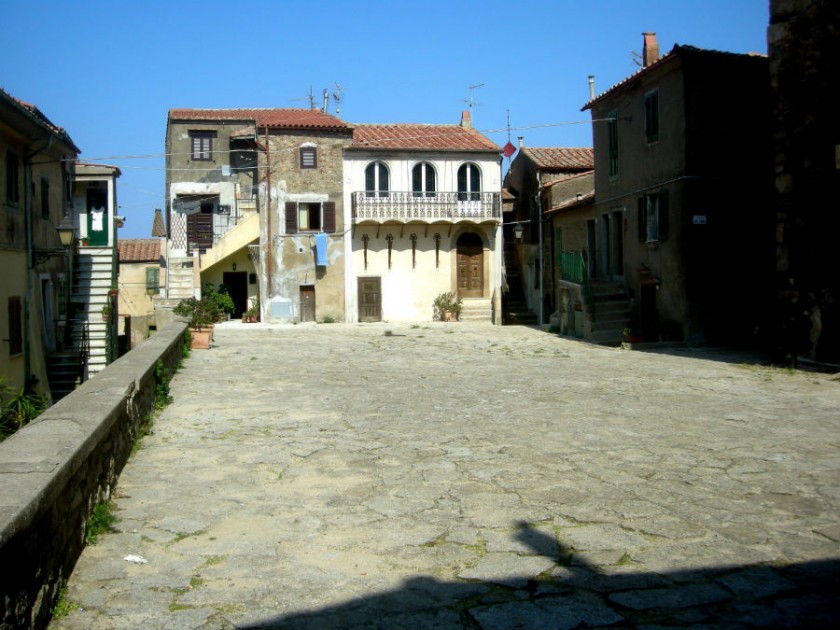 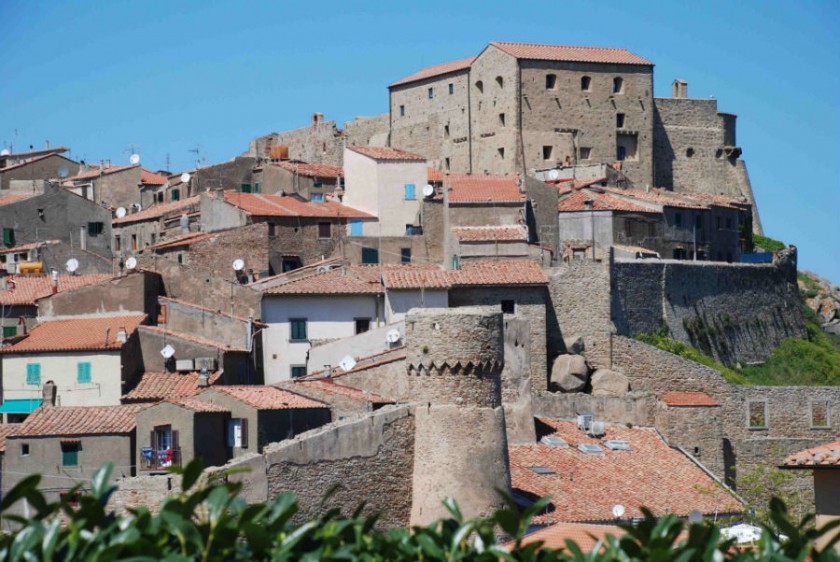 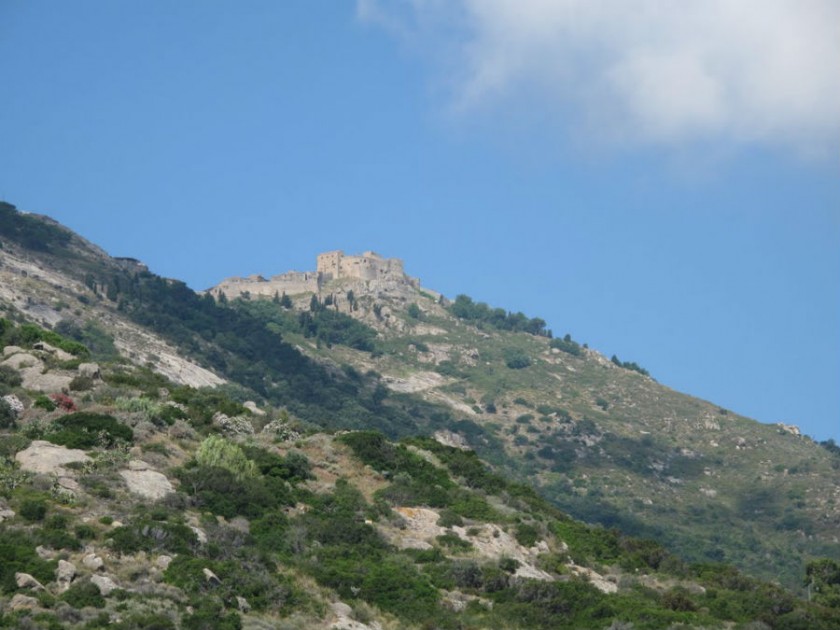 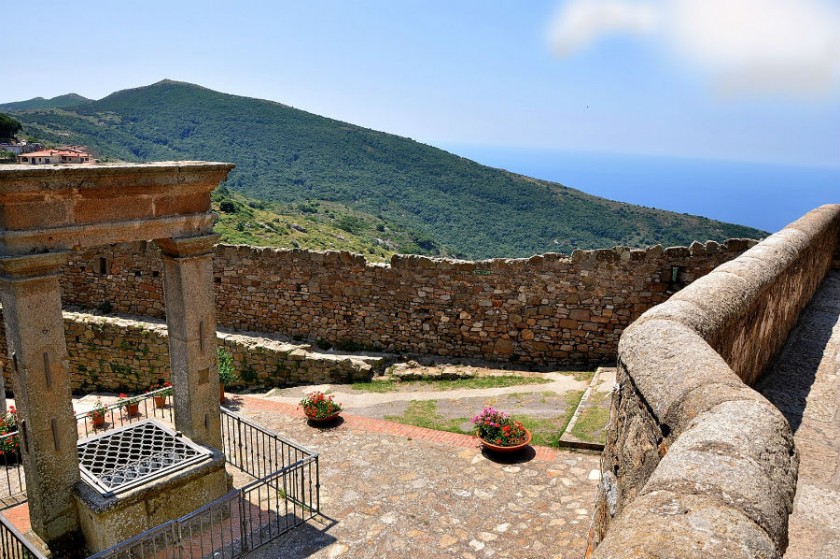 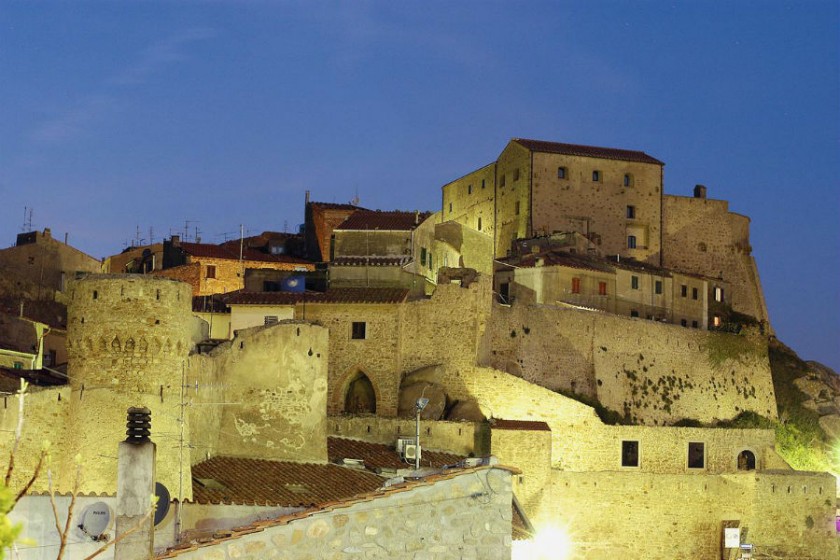 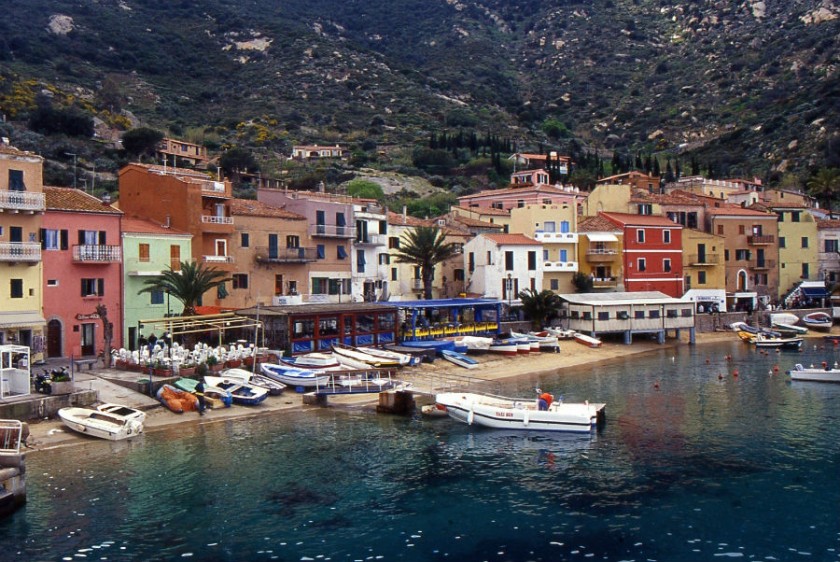 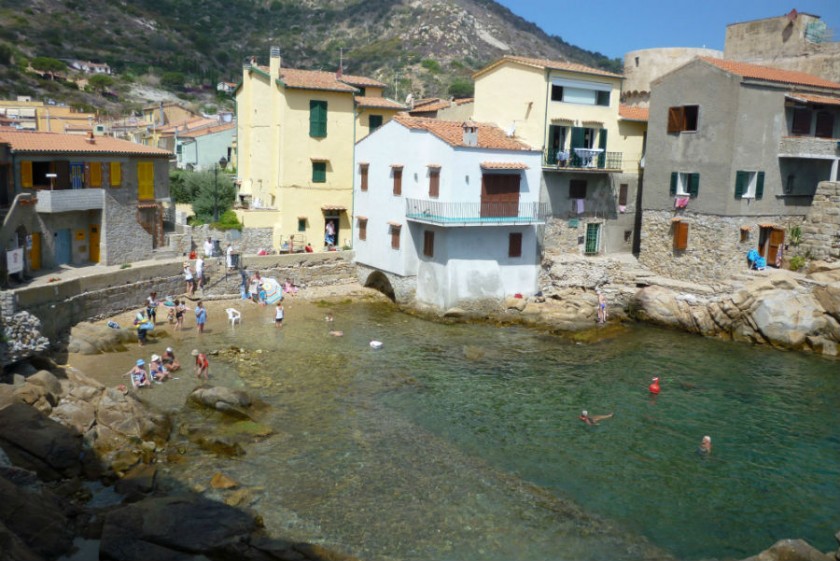 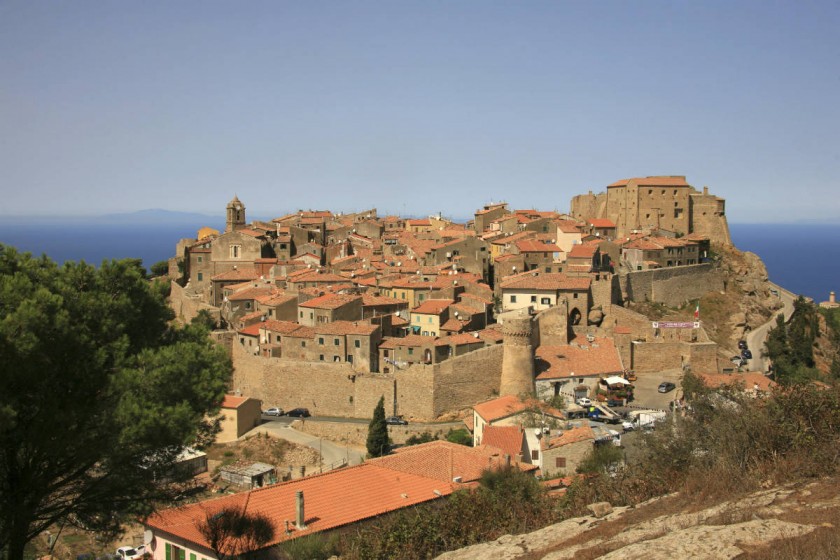 A look at Giglio Castello 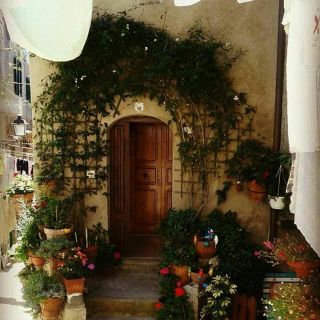 Giglio Castello is the fraction of the cumune of the Island of Giglio and rises in the highest area of the island.
What fascinates tourists are the perfectly preserved walls and towers that completely enclose the village.
Of medieval origins, Giglio Castello is characterized by the imposing Rocca Aldobrandesca, in Piazza XVIII Novembre, an imposing defensive construction that makes this village a suggestive destination with a unique charm.

The Church of San Pietro, from the 15th century, is the main church of the Giglio, in which the treasure of Pope Innocent XIII is kept and it is possible to admire a magnificent ivory Crucifix, by Giambologna. Inside are also the venerated relics of San Mamiliano, protector of the Island and of the Tuscan Archipelago.

The Giglio is the land of the captains of the sea, artists and musicians. To get there in the summer, with the cool sound of the sandals. You can climb to the castle for the evening ritual of cellars, premises, restaurants, and when at last the night carries the silence, and even hawks and the ravens have left the sky, the sound of the sea back to be felt. The passing of the centuries in the flow of the water infinite have chased away the fear of Turks from the island: Saraceno and Barbarossa are only the name now, some local entertainment. Nevertheless, everything continues to be wonderfully changeable and indifferent, in the midst of this limpid sea.
By solid walls of granite of Giglio Castello, the eye ranges over the other lands emerged - Giannutri, the mysterious Montecristo, furthest Pianosa - while the former seafarers depict paintings naif with colorful sailboats. The Giglio actuate the winds, weather, the little land with its yields inconstant. Everyone who comes here remains charmed by a dark energy. Who goeth, has the suspected to have lost sight of it. Who gets back, has the relief to be able to finally release.
Everything changes: You do not build more dry walls, trellises, pots, and fishermen do not mend more their networks. Maybe not even the words know more of salt, from when sailing boats have lost their bright horizon. But the Lily is still there: still there the castle built by the Pisans in the XII century; still there the cellars where, between a chatter and the other, it offers to the loop a good glass of Ansonaco, fruit of the vineyards that are near the lighthouse or somewhere else; and still illuminate the illuminations for the feast of San Mamiliano, who in 1799 helped the population to dispel the Tunisian pirates.

Via Panoramica, 15, Monte Argentario (Grosseto)
24.57 Kilometers from Giglio Castello
Church of the Madonna della Neve
The church of Madonna della Neve is also called "della Piscina" because of its proximity to the P...

Strada Provinciale la Bella, 73 - 58037, Santa Fiora (Grosseto)
76.15 Kilometers from Giglio Castello
Spanish Fortress
The Spanish Fortress of Porto Ercole in Tuscany was one of the defensive ramparts of the promontory.

Via Giuseppe Garibaldi, 15, Magliano in Toscana (Grosseto)
41.27 Kilometers from Giglio Castello
= distances as the crow flies

Piazza Rosa Tiberi Guarnieri Carducci, 18, Castel del Piano (Grosseto)
78.21 Kilometers from Giglio Castello
The Garden of the historic center
in the village of Montemerano, two steps away from the Thermal Baths of Saturnia and from those o...

Piazza Canzanelli, 1, località Montemerano, Manciano (Grosseto)
56.09 Kilometers from Giglio Castello
Tenuta Il Cicalino
Located at the foot of the medieval village of Massa Marittima, in the picturesque setting of the...

Via Arenile, 3, Castiglione della Pescaia (Grosseto)
43.83 Kilometers from Giglio Castello
= distances as the crow flies
Trattoria Verdiana
It is a place of simple elegance, where, in winter, you can eat in front of the fireplace and in ...

SP159, località Ponticello,, Manciano (Grosseto)
56.42 Kilometers from Giglio Castello
Vecchia Osteria Cacio e Vino
Every dish is matched to a particular wine. You can taste delicious local dishes in a friendly at...

Our news about Giglio Castello

Tuscany: the village of Giglio Castello between the extraordinary view of the archipelago, a glass of Ansonaco and the rabbit cacciatore
It is an extraordinary sight on the Tuscan archipelago and on the Argentario, one that can be enjoyed from the village of Giglio Castello. A view that between sun and nature is lost on the horizon, where the sea of ​​Tuscany joins the sky. It is on the heights of the island of Giglio that the medieval village stands almost as a lookout of its borders, truncating on the natural treasures of this patch of land to a handful of kilometers from Po...
Continue
Wine Festival in the Borgo of Giglio Castello
The village of Giglio Castello is built within the walls of the Aldobrandeschi Fortress and, it would seem, into the very rock of the island. The twisting alleys negotiate jagged stones and dip beneath rugged arches. Apart from the arresting view of the surrounding sea (and occasionally of Isola d'Elba and Corsica on clear days) Giglio Castello has a surprise for art lovers - an ivory crucified Christ attributed to Giambologna - and for histor...
Continue
Ten seaside villages in the centre of Italy worth visiting during this summer
10 villages overlooking the sea, 10 rare pearls of our italian landscape, 10 locations that can not be missed during the year of the villages. Ok, we have a lot of pearls in Italy but today we want to show you just some we believe are really worth visiting during the summer on the central coasts of our country. 1. Our tour starts from Tuscany with the hamlet of Giglio Castello, a fraction of the Giglio Island which is located in the hig...
Continue
Recipe: the Panficato of Giglio Castello
A typical dessert of Giglio Castello, the Panficato has ancient origins and is considered the typical winter dessert par excellence of the Island of Giglio, today it is possible to find it in the pastry shops of the town all year round. It seems that the dessert resembles the renowned Panforte di Siena, since, through historical information, in 1544 after a fierce Saracen incursion the Medici family repopulated the island with a forced transfer of populations of Sienese origin who handed down their traditions but using the products which ...
Continue
Unique Tuscan villages to Love - Download a free travel guide to the 51 certified Tuscan villages
It has recently been made available a free travel guide by Toscana Promozione Turistica, in Italian and English, about 51 Tuscan villages certified in the Borghi più Belli D'Italia, Paesi Bandiera Arancione, Mibact's Gioielli d'Italia and UNESCO World Heritage Sites. The volume, edited by Claudio Bacillieri, director in chief for Borghi Magazine, accompany th...
Continue